You’ve probably heard of Fordlandia – it crops up again and again on the internet’s “weird things” zones.

Even jóhann Jóhannsson, the brilliant musician who did the theme music for Arrival, Sicario, and The Theory of Everything, has gotten into it, producing an album of found sounds and music performed in the abandoned factories. [wik] I have it. It’s OK. There is something undeniably weird about a factory town in the middle of nowhere in Brazil, built there by the hubris of Henry Ford. 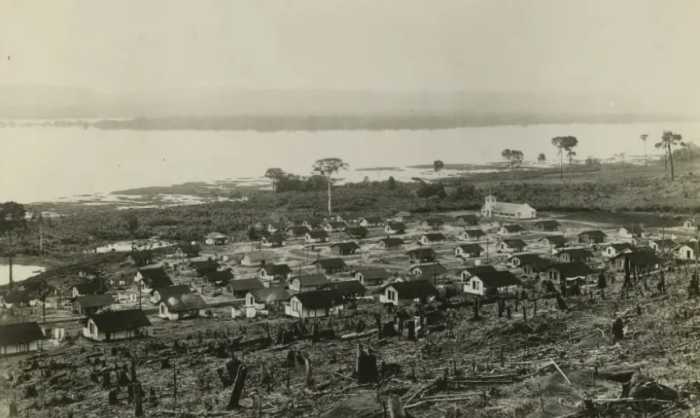 This article at The Guardian goes into its history in a bit more detail, and has some nice pictures. [guard] I find it odd and a bit off-putting that most of the discussion about Fordlandia is “it’s weird and it didn’t work because of the economics of rubber production and the invention of synthetic rubber.” Yes, that’s true. But the story is not merely that Ford made a mistake. Omitted from that version of the story is the history of Henry Ford’s racism, and his relationship with labor.

Since I’ve been writing about labor and labor unrest, it would be inappropriate for me to omit mention of the great ‘riot’ at the Ford plant at The Rouge in Dearborn in 1937. Fordlandia was built in 1932. Ford was already having difficulty with unrest at his factories and it’s impossible to imagine that Ford wasn’t looking at Fordlandia as an opportunity to implement a vertically integrated employee economy, like the mine bosses in West Virginia built to trap their mine workers. Another piece of the puzzle (I will do a whole posting on the topic, if I have the stomach for it) is Pullman, and the town of Pullman which was built in 1880 and the great Pullman strike of 1890. Fordlandia and Pullman were both way-points on the american anarcho-capitalist dream world in which the entire economic output of labor was captured from birth to death, except workers’d be fired and evicted when they got too old to work anymore.

Accounts of Fordlandia often omit the totalitarian overtones of the anarcho capitalist dream. Like Hobby Lobby and other modern corporate totalitarians, Ford had a specific cultural and social agenda, as well. From Wikipedia [wik]:

The town had a strict set of rules imposed by the managers. Alcohol, women, tobacco and even football were forbidden within the town, including inside the workers’ own homes. Inspectors would go from house to house to check how organised the houses were and to enforce these rules. The inhabitants circumvented these prohibitions by paddling out to merchant riverboats moored beyond the town jurisdiction, often hiding contraband goods inside fruits like watermelons. A small settlement was established 8 kilometres (5 mi) upstream on the “Island of Innocence” with bars, nightclubs and brothels.

Ford prohibited “outside influences” including religion from the plantation. I suspect union organizers weren’t welcomed, either, but I have never found any mention of union activity at Fordlandia. Surprised? I read about these things and I think that George Orwell didn’t have to stretch his imagination that hard; 1984 is a brilliant book in every way, but it’s not really a great extrapolation of a dystopian future: it was life for a West Virginia miner or a Ford plant worker.

Even Fordlandia had labor unrest, though it was minor:

In 1930, the native workers grew tired of the American food and revolted in the town’s cafeteria. This became known as the Breaking Pans (Portuguese: Quebra-Panelas). The rebels proceeded to cut the telegraph wires and chased away the managers and even the town’s cook into the jungle for a few days until the Brazilian Army arrived and the revolt ended. Agreements were then made on the type of food the workers would be served.

It does occur to me that Ford probably thought Brazilian laborers were more inclined toward servitude than Americans, because of some racist theory or other, but it wasn’t explicitly said. It was wrong, of course. The histories of Fordlandia are written that the place was shut down because the development of synthetic urethane rubber made rubber farming superfluous, but I wonder if the other aspect that didn’t work was a captive labor pool.

This is all “right to work” stuff, remember: when corporate capitalists talk about “right to work” what they mean is that a company can employ whoever they want, however they want, and govern the entire relationship contractually. Which means, of course, that they can have racist or sexist hiring practices, use the threat of termination and destitution as a negotiating lever, and there is no regulation preventing them from running the place like a slave plantation. That’s the model they wanted, and that’s the model they kept (and keep) working toward. When you read about the history of labor riots, it’s full of mine and mill bosses saying “dang it, nobody’s going to tell me who I can or can’t hire or fire!” which means, in shorthand: I have the power.

Fordlandia today is described as a weird failed business idea, not an experiment in totalitarianism from which a bunch of Brazilians were rescued by the invention of synthetic rubber.

I’m disappointed by Marx and Marxists, because I think they stumble off into the weeds and never emerge, trying to explain a theory of justifying the value of labor. What Marx was trying to accomplish was to identify a way of measuring the value of labor in an entire production line: given that a company owns the factory (the means of production) it’s not unreasonable to say that the company needs to recoup plus make a profit for its contribution to the economics of the plant – so, what is labor owed? That whole dialogue is irrelevant if the means of production are owned by labor in the first place; that’s why I favor employee owned and operated businesses – which are shockingly rare in these times. Why is that? Well, capitalists don’t get to come along and grab a slice of the action, that way. I think Marxian reasoning was fair enough in an industrial economy, where labor was interchangeable and factories were hugely expensive – but today we see the internet being used to “disintermediate” some businesses; oddly, though, the “disintermediation” is done by software companies that are not trying to truly “disintermediate” – they’re placing the company across the transaction, controlling it, and charging a smaller but very real slice of the action. Put differently: I reject the idea that Uber’s servers and software are that innovative and important and I wonder that nobody has developed a free alternative. Uber has already demonstrated that there’s a business niche there; why not simply shoot the entire “taxi cab” industry in the heart and put in place a free ride needed/ride offered system? Capitalists would not allow that. That’s why. If you step back a few paces, you can conceptualize capitalism as a sort of built-in tax on businesses: the capitalists get their slice and in return they offer… what? If that reasoning is accurate, replacing capitalism in businesses ought to be a matter of identifying the size and value of the “capitalism tax” and building employee-owned businesses that invest in their own start-up costs without a capitalist or kickstarter or “disintermediator” between them and the customer.

Thank you all for the supportive comments. This kind of stuff is difficult to dig through, and I really do have blood squirting out of my ears, sometimes. The horror that is US labor/capital relations is a deep vein of nasty that I could mine for years without tapping out. I may take a break for a while because we need to pause to watch the drama of the kakistocracy in Washington and cheer when we’re told to for the great Biden cardboard cutout. Frankly, this stuff is so depressing it’s hard to get out of bed in the morning. Next up, maybe the fallout from the Haymarket incident, or the Ford strike, or the Pullman strike. Ugh. All of those are great riots of yesteryear, featuring dead strikers, dead cops, a corrupt justice system, and a national guard that loves to bayonet strikers.