My welding does not make me proud, but what the heck – I’m going to just forgive myself and move on.

Now that the doors are on and up (I’m still jiggering running wheels and an air-dam at the bottom of those) it’s time to start assembling the machinery into a workable configuration. I’ve decided to do all the cabinets and stuff first, then run the electricity because by then I’ll know exactly where it goes.

The center of the room, naturally, will be the forge. It’s going to be hot, heavy, and I want it to be set up so that there’s no chance of it falling over or anything remotely like that.

All of that means: this is a good opportunity for some overkill(tm).

I want to have the forge on a table, along with the heat treating kiln, so plenty of horizontal space is a good idea. A shelf underneath for sticking things is a good idea, too. I don’t want to have to worry about sparks or radiant heat setting something on fire, so wood seemed like a bad idea. That left tube steel. The stuff is ridiculously strong and heavy and by the time I assemble a table from it, I don’t need to worry about an errant breeze coming through and flipping the thing over. 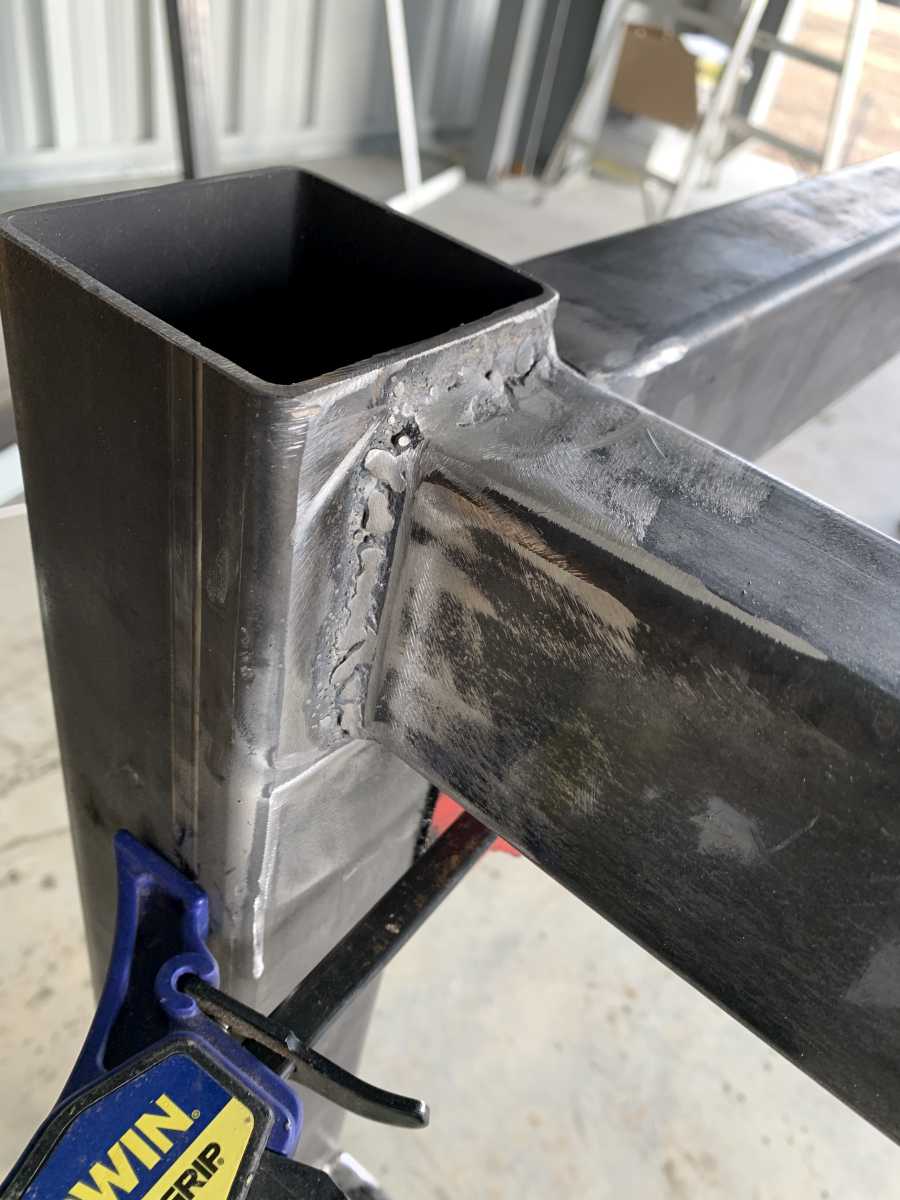 My welding is not great, but it improved considerably by the end of this project! That’s one of the earlier ones. The first few welds, I stuck together, then ground the weld down, then filled the holes, then ground it down, etc. It’s basically impossible to hurt the stuff so, why not? 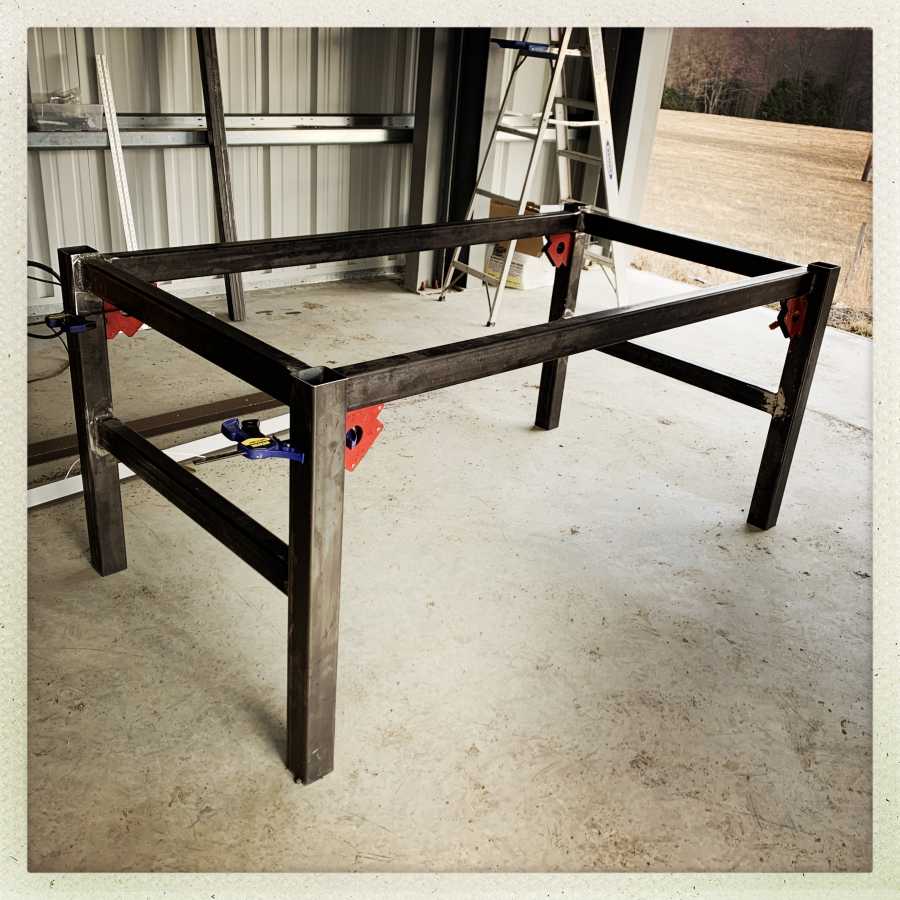 I put the side tubes so they are cheated toward the inner side of the vertical tubes; that way there will be a 1/2″ lip for the bottom shelf and top tray to sit on. The plan is simple: flip it over, haul the 1/8″ thick steel plate into position, then tack it down. Well, that added about 100lb to the thing – it started getting heavy very quickly. Once everything’s tacked together, I made some long weld-lines to seriously hold it all together, then sanded them down and applied more paint. 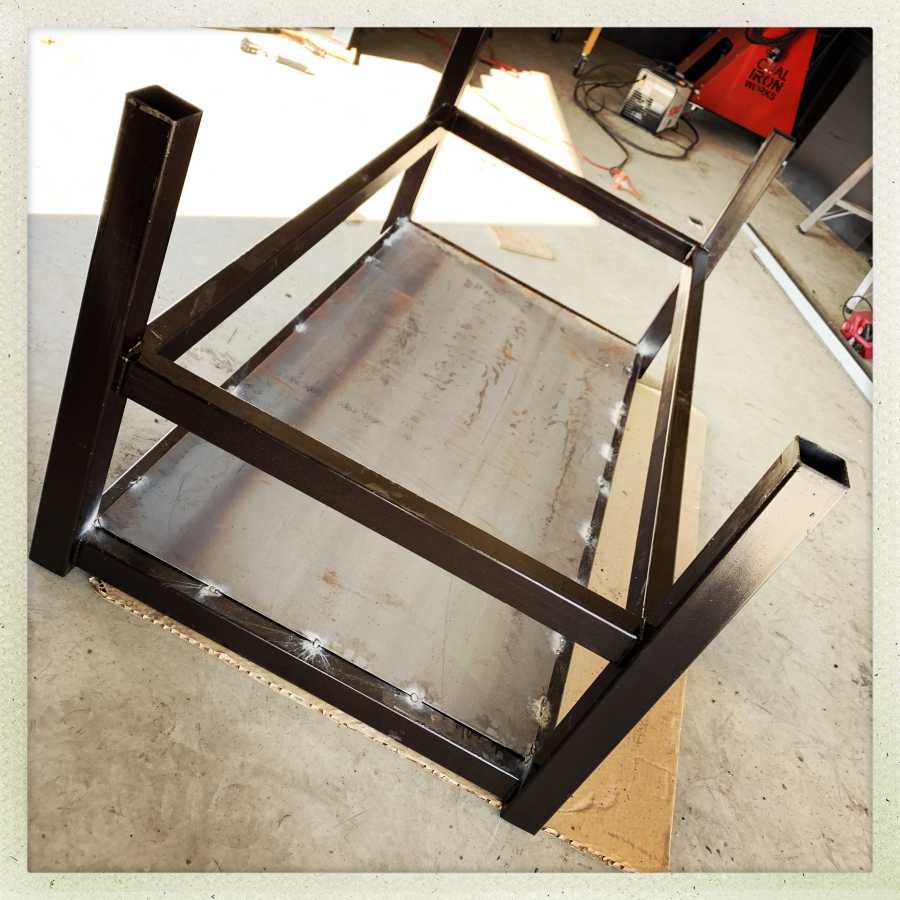 One of man’s great inventions: paint 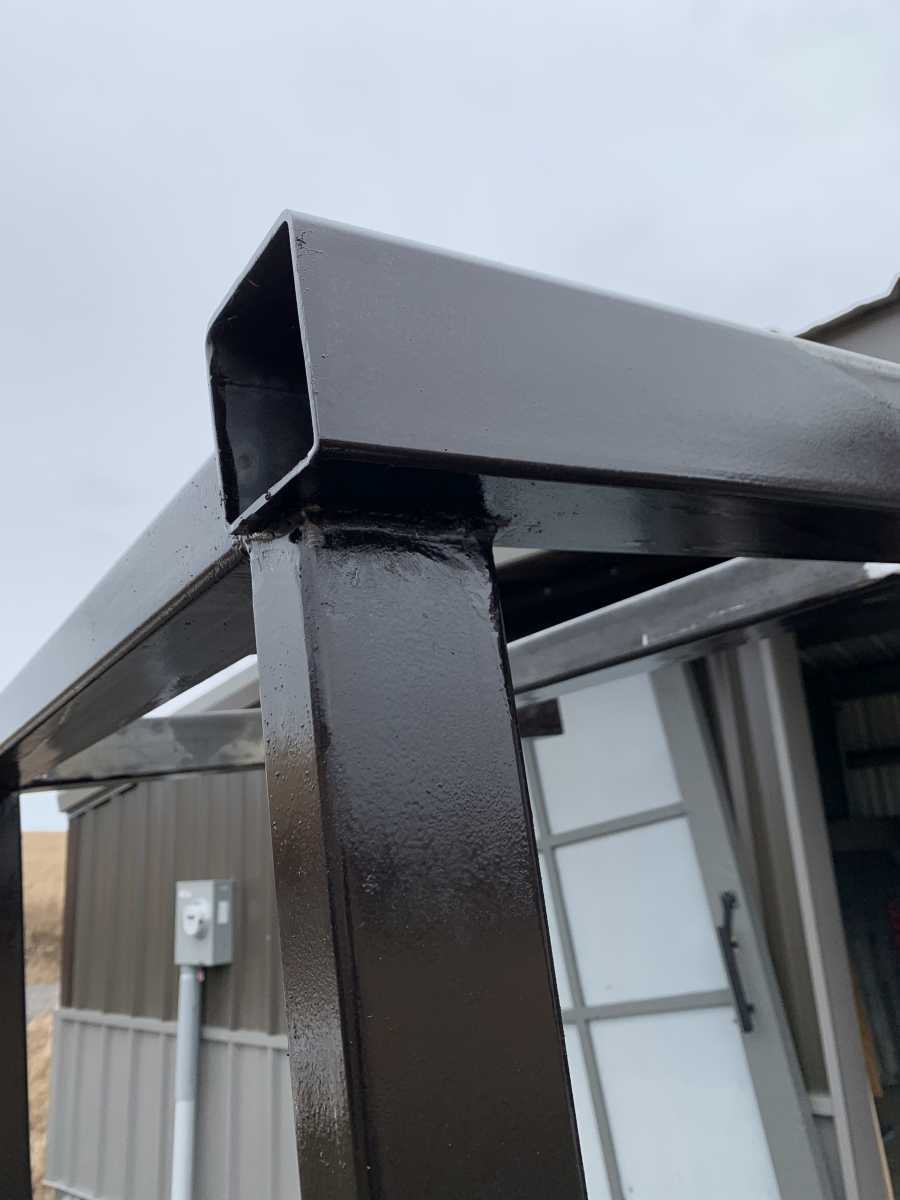 I dragged the whole thing outside in the sun where it would warm up and I could smear paint on all the things. When I had it half done and dripping, it started to rain. [In the background you can see the door is off its rail; I was digging a trench for the bottom air dam to run down]

Eventually, I positioned it in what will be its final resting place. It’s cheated off to one side to allow me to swing a piece of hot metal over toward the press (the press will move from its current location) and the floor-holes will allow me to mount the post vise; the anvil will be on the other side. I think it’ll work out pretty well. 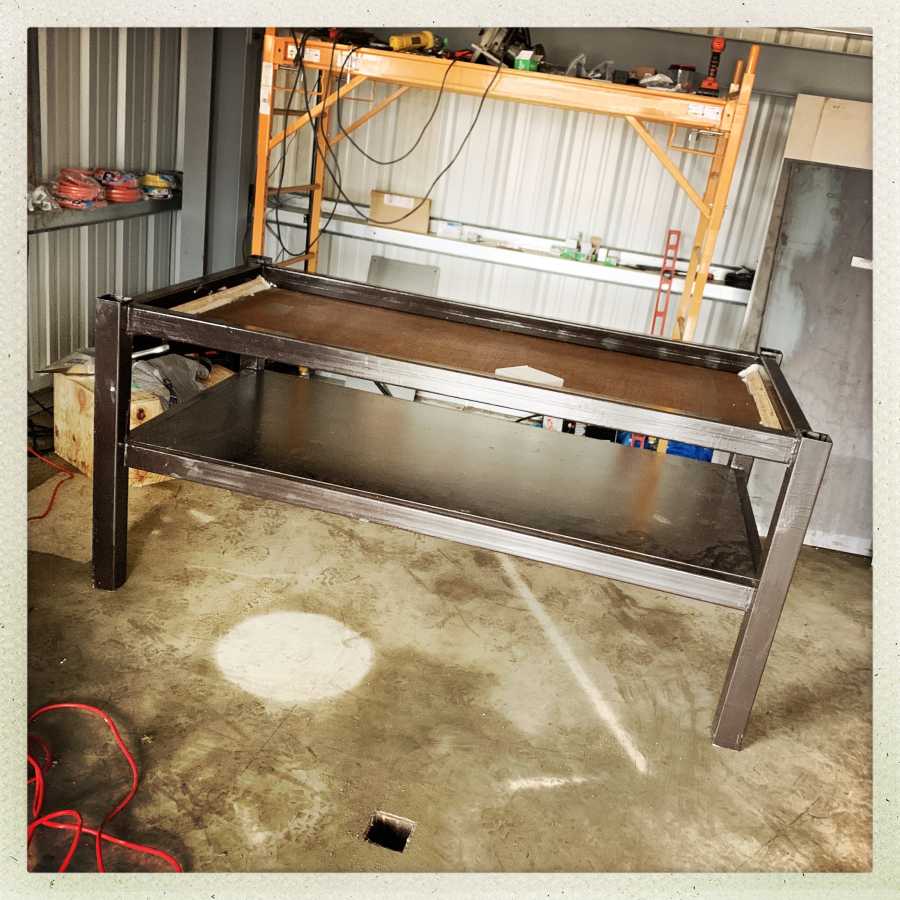 It will have to work out because it’s not going to move much from there. The final stage of setting the table up will be to put a couple sheets of cement board on the top, and fill it to the lip with concrete. It currently weighs about 300lb, and moving it was a chore.

What really sucked was flipping it upright after welding down the top panel. It was just damn heavy. I finally hit upon the idea of putting a steel pipe in one of the legs and getting way out at the end, then using the leg as a lever. My welds are solid enough that picking it up by one leg doesn’t seem to hurt it, so I guess that’s good.

Behind where the table sits, there is room for a couple large floor-cabinets, which will be used to store all the things. I also have two smaller wall-cabinets that will be mounted near the presses and the hammer; I will store dies and whatnot in them. To mount those, I made header-boards similar to the ones for the door track: they’re supported through the beam by hanger bolts and bolted through the steel wall. I make the header-boards with glued up plywood ridges on the back that fit into the corrugations of the wall; I don’t want to crush the metal and it makes for a very positive assembly.

Once I have the cement done, I’m going to assemble and mount the cabinets, then (in parallel) work on the doors for the other side of the building. Spring is here, which is great temperature-wise but it means everything is muddy, wet, or both. Mostly both. If I can seal the other side of the building then it’ll be able to dry out inside, and then I can use a broom instead of a shovel to clean the floor.

I dread assembling the “some assembly required” cabinets. Every time I’ve ever assembled one of those things, I have regretted being born.

Last night, my toilet’s valve failed, so I decided to replace that. Since there is only one toilet in my house, I couldn’t let it sit for days, so I started disassembling things – or tried to. The bolts holding the tank on were a mass of corrosion and they refused to budge. But I had an angle grinder with a diamond cutoff wheel in the shed, so I found myself kneeling with my arms around the commode and a shower of white hot sparks bouncing off the tile floor and going all over the room. You have to be careful with those diamond wheels because they’ll carve right through the porcelain, too, like it’s cheese. I got the job done in about 2 hours (with a break to go obtain one of those weird toilet wrenches) but the whole thing felt like a waste of time. Why don’t they use stainless steel for all of that hardware? It’d raise the price by $1 at most. Oh, yeah, capitalist markets bringing the consumer the best options.