The google word significance score is always a fun tool to play with. I’m glad it’s not part of my profession, though, because I’d insist on something better and I’d want to know more about how the metric is generated.

It’s a good proxy for popular attention, though. 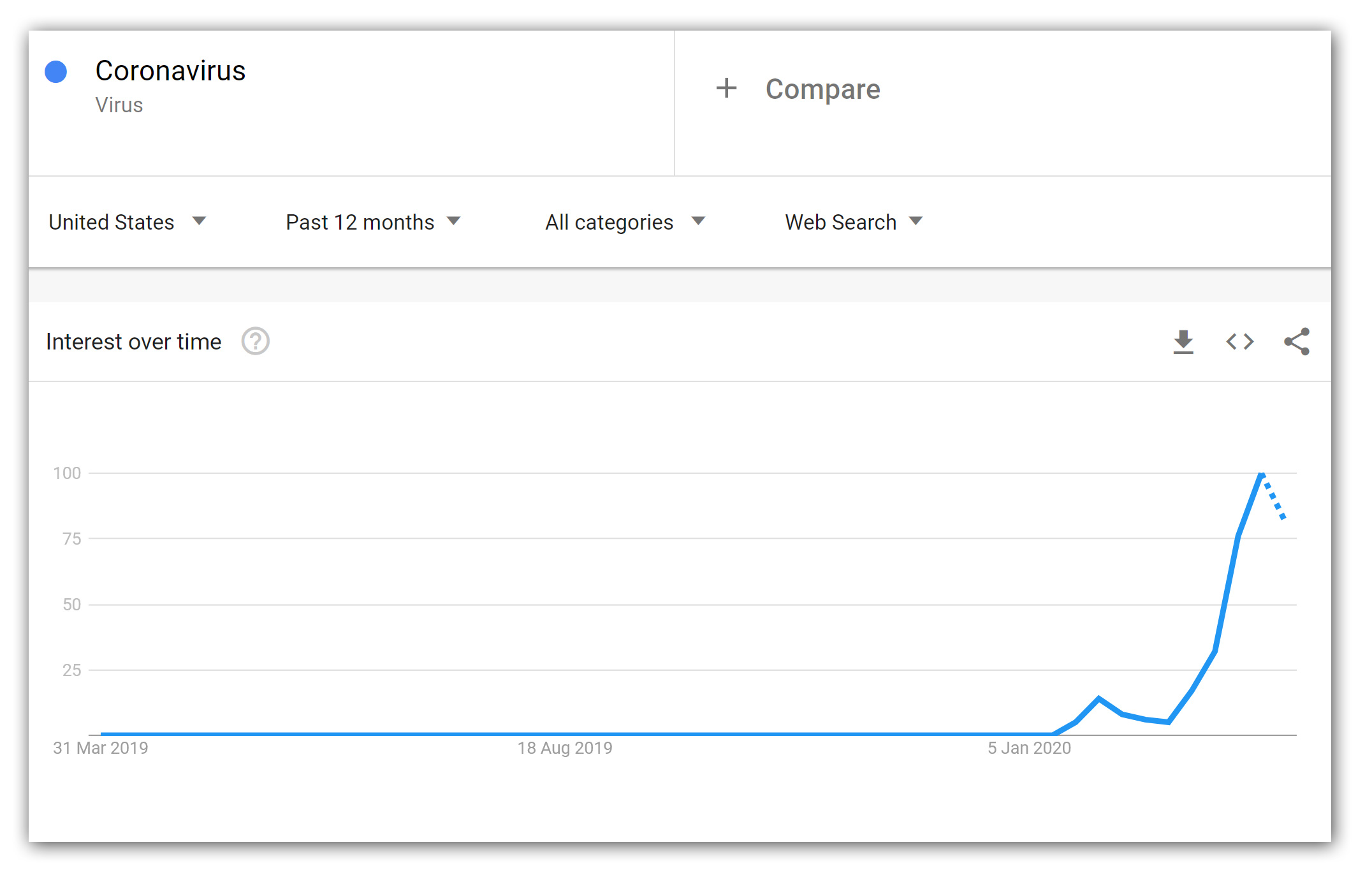 I like how it marks the date where there is a significant change; presumably January 5th was around the time that all the brokers who worked for congresspeople started googling “coronavirus” after they had executed their sell orders.

It seems like a good application for AI, to monitor a bunch of keywords and generate alerts if there are fluctuations in the infosphere, or tremors in the force, or whatever you call it.

Back in the 00’s some of us used to joke that it’d be valuable to set up a counter-intelligence service that had agents in place in Washington and kept an eye on what the bureaucracy and surveillance state were looking at. The open source intelligence that was gathered would be sold to stock pickers, exclusively. The best part of the scheme was that the people running the service would be positioned to trade ahead of their own customers – i.e.: tell the stock pickers “coronavirus outbreak is getting a lot of discussion” and reason that there’s going to be some selling. Then, sell. That sort of system is what my old friend Dan Geer used to refer to as a “problem magnifier.” Something that makes things worse in a crisis by trying to ruthlessly exploit opportunity. Later, we realized that it’d probably be good enough to just have a crew that went by and surreptitiously photographed the guest-books at a number of big investment bankers, to see who was meeting, when. It appears that nowadays the investment bankers have figured that one out, because mergers and acquisitions are carried out under assumed names, usually meeting in hotels’ executive suites. I suppose the state of the art would be to drop spyware on executives’ smartphones.

The Securities Exchange Commission has something like 3 people devoted to prosecuting insider trading. That means, pretty much, that you’re going to get away with it unless you’re amazingly stupid or you’re high-profile and someone wants to retro-scope you and take you off the political game-board. I did some work a bunch of years ago for the Depository Trust Clearing Corporation – the actual company that processes securities transactions; it’s a super-interesting company. They have statisticians that look for the traces of unusual activity and they’re the ones who wake up the regulators if (for example) some congressman started dumping shares in a certain market back in December. All these patterns are visible in the retro-scope, you just need to know where to look, and regulators are supposed to do that. The kind of information they always have at their fingertips is the kind of information that would make anyone very wealthy indeed, if they wanted to trade ahead of the market. Unlike congress, people who work for that company are not allowed to participate in the stock market.

Hell Is A Ship » « I Had Wondered About That