Boats and ships scare me. That dates back to a particularly difficult English Channel crossing in the 1960s, when my dad thought it’d be cool to take the train to Dover from London, then the Dover/Calais ferry, and the train to Paris.

We were halfway across when the storm hit, and the ferry was bucking and rolling and there was water everywhere. I remember being in the game room (which mostly smelled of cigarettes because everyone could smoke anywhere in those days) and the air became redolent with vomit and cigarette ash. I gather from real sailors I later came to know, that the whole thing was probably relatively safe, but it was enough for me. I seem to have bad luck at sea – or even in millponds. One time, my high school friend Bill K and I took his laser out from Gibson Island in November and managed to flip it and get the mast stuck in the soft bottom of the Chesapeake Bay. We were getting giddy and dizzy from the cold by the time we managed to right it – by complete luck – being lifted by the bow wave from a far off tanker. Another time, Bill and I were crewing on his uncle’s 60-foot sailboat and uncle hit a sandbank at a fair clip and we all slid down the deck like bowling balls. And then there was the time Fred M and I were fishing off of one of the footers of the Woodrow Wilson Bridge on the Potomac and a storm blew up and sank our little aluminum bass-boat. Who’d expect 6-foot waves under a bridge? We were stuck there for 6 hours until someone came by and heard us yelling. My worst boat experience was in high school, when one of my dad’s colleagues invited me out sailing with his sons, and we had a fine time on a dead-calm day on the Chesapeake. Since it was dead calm, there wasn’t much sailing to do, so Professor W fired up the aptly-named trolling motor and we putted out a good distance from shore, at which point the trolling motor died. So we had a good-sized boat that was dead in the water, and some little wooden paddles which the boys (including me) attempted to use to paddle the boat back to shore. That did not work. Eventually, one of us fell overboard (his son Gilbert) and noticed that the bottom was actually pretty shallow – so the three of us jumped overboard with ropes and pulled the damn thing nearly a mile. I think I am bad luck; what they used to call a “Jonah” and I try to avoid boats ever since. My company used to have its annual Xmas party on the Pride of Baltimore – a converted piece of crap that has been turned into a floating booze, buffet, and 80s’ music party boat. Since I was an officer of the company I had to go, but I was always ready to grab a life vest and start swimming.

I can only imagine the post traumatic stress disorder that is going to result from the hellish combination of cruise ship + novel coronavirus. “Hey let’s all get on a perfect incubator with someone who has a new virus!” – the experience of the Diamond Princess is now history [nyt has an interesting in depth] but there was also the Grand Princess in San Francisco. (conclusion: do not get on ships named .*Princess.*) [21 cases and lots of infections] but that’s the tip of a hellish iceberg: there are other cruise ships that have become floating outbreaks and are being denied landing at multiple countries. It’s like the M.S. St Louis all over again except the disease is virus not antisemitism. [history] The St Louis held ~900 jews fleeing Germany for the US, but was turned away at New York, tried Cuba and was turned away again, and eventually wound up landing in England where some of the passengers were locked in an English concentration camp and others were sent to Europe where they wound up in German concentration camps and were murdered.

Currently the ships are: [bi]

I’ve never been on a cruise ship but I know someone who was, years ago. They described a surfeit of oily cooking and cheap sugary colored drinks full of white rum. It sounded like The Pride of Baltimore except you’re in shark-infested waters and can’t swim ashore. 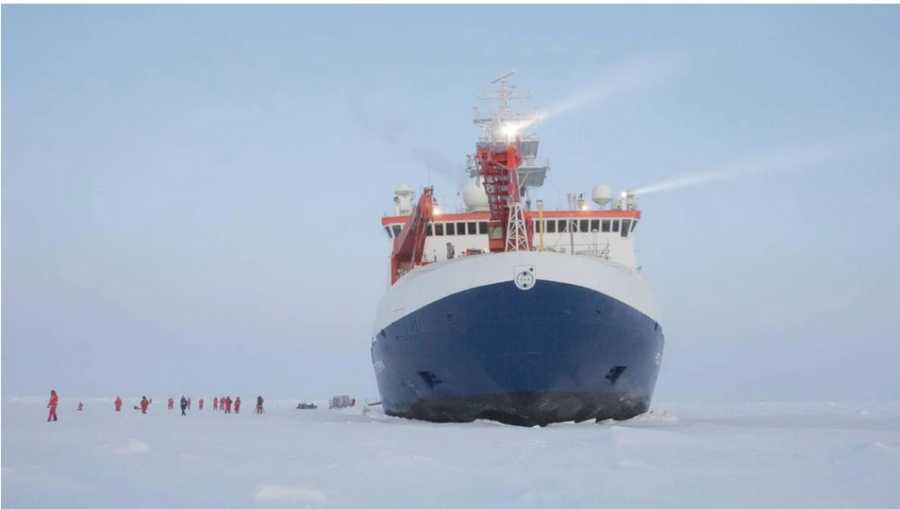 The German icebreaker Polarstern is locked in ice near Svalbard and they are wrestling with the problem of resupplying the ship without exposing anyone aboard to coronavirus.

The first signs of trouble came earlier this month, when a researcher who had planned to participate in survey flights out of Svalbard to support MOSAiC tested positive for the virus. That caused MOSAiC to delay its spring airborne campaign, and subsequently, the campaign was canceled as the Norweigan government and local authorities on Svalbard began restricting international travel.The MOSAiC team is exploring the possibility of extending a series of planned summertime flights to compensate, although Rex warned that it’s “too early to say what will happen to the summer phase.”

I bet they never planned to sign up for a Shackleton re-enactment. It’s not like you can escape over the ice, either – Svalbard is one of the big nature preserves where they study and observe polar bears, and those bears are seriously pissed about the global warming.

The pièce de résistance to all of this is the nuclear aircraft carrier, USS Theodore Roosevelt, which was in the western Pacific and has steamed for harbor in Guam with several infected crew. [fox] The ship’s normal complement is 5,000 people, including the fighter wing. Isolating crew on a military ship is not a capability that was built into the design of the system – crew do not have individual rooms, so the potential for outbreak makes a cruise ship look positively healthy, in comparison. Except nobody is handing out sugary colored rum-drinks with little umbrellas in them.

My deepest sympathies to all the people on all the ships. Note: don’t get on ships with names that match: .*

Another scary ship: I took the Caledonian MacBrane ferry from the mainland to Islay, once. It was a beautiful calm day on the Irish Sea and the water was flat as a surface plate. I wandered around the ship and in the upstairs lounge was a good-size model of the vessel, pretty detailed. The model showed large extensible underwater planes that would help keep the boat upright in nasty weather. That made me look around and notice that all the doors were water sealable and basically I was on a submarine that chose to ride on the surface at that moment.  The rest of the trip I spent scanning the horizon for scary clouds.

A lot of Norwegian-descended people, like myself, seem to like to fancy themselves as vikings. I lack all illusions on that score. Definitely, I’d be the one who’d jump up and say, “well, I’ll just stay here on land and make you some nice stabby sword-things while you go out to sea possibly never to return.”

The ballistic missile sub crews are some of the people in the world who (for now) don’t  have to worry about coronavirus: [la]

Submariners stealthily cruising the ocean deeps, purposely shielded from worldly worries to encourage undivided focus on their top-secret missions of nuclear deterrence, may be among the last pockets of people anywhere who are still blissfully unaware of how the pandemic is turning life upside down.

Crew members of ballistic submarines are habitually spared bad news while underwater to avoid undermining their morale, say current and former officers who served aboard France’s nuclear-armed subs. So any crews that left port before the virus spread around the globe are likely being kept in the dark about the extent of the rapidly unfurling crisis by their commanders until their return, they say.

“Spared bad news”!? So they live in an information vacuum? I guess that’s part of what it takes to get people to the point where they’re willing to kill millions of strangers.

The Saga Of the Red Resin Bowl » « Interest