From Malcolm X’s “The Ballot or The Bullet” speech: 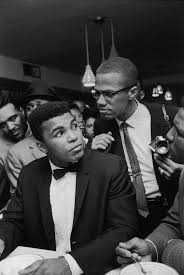 1964 threatens to be the most explosive year America has ever witnessed. The most explosive year. Why? It’s also a political year. It’s the year when all of the white politicians will be back in the so-called Negro community jiving you and me for some votes. The year when all of the white political crooks will be right back in your and my community with their false promises, building up our hopes for a letdown, with their trickery and their treachery, with their false promises which they don’t intend to keep. As they nourish these dissatisfactions, it can only lead to one thing, an explosion; and now we have the type of black man on the scene in America today — I’m sorry, Brother Lomax — who just doesn’t intend to turn the other cheek any longer.

These 22 million victims are waking up. Their eyes are coming open. They’re beginning to see what they used to only look at. They’re becoming politically mature. They are realizing that there are new political trends from coast to coast. As they see these new political trends, it’s possible for them to see that every time there’s an election the races are so close that they have to have a recount. They had to recount in Massachusetts to see who was going to be governor, it was so close. It was the same way in Rhode Island, in Minnesota, and in many other parts of the country. And the same with Kennedy and Nixon when they ran for president. It was so close they had to count all over again. Well, what does this mean? It means that when white people are evenly divided, and black people have a bloc of votes of their own, it is left up to them to determine who’s going to sit in the White House and who’s going to be in the dog house.

lt. was the black man’s vote that put the present administration in Washington, D.C. Your vote, your dumb vote, your ignorant vote, your wasted vote put in an administration in Washington, D.C., that has seen fit to pass every kind of legislation imaginable, saving you until last, then filibustering on top of that. And your and my leaders have the audacity to run around clapping their hands and talk about how much progress we’re making. And what a good president we have. If he wasn’t good in Texas, he sure can’t be good in Washington, D.C. Because Texas is a lynch state. It is in the same breath as Mississippi, no different; only they lynch you in Texas with a Texas accent and lynch you in Mississippi with a Mississippi accent. And these Negro leaders have the audacity to go and have some coffee in the White House with a Texan, a Southern cracker — that’s all he is — and then come out and tell you and me that he’s going to be better for us because, since he’s from the South, he knows how to deal with the Southerners. What kind of logic is that? Let Eastland be president, he’s from the South too. He should be better able to deal with them than Johnson.

In this present administration they have in the House of Representatives 257 Democrats to only 177 Republicans. They control two-thirds of the House vote. Why can’t they pass something that will help you and me? In the Senate, there are 67 senators who are of the Democratic Party. Only 33 of them are Republicans. Why, the Democrats have got the government sewed up, and you’re the one who sewed it up for them. And what have they given you for it? Four years in office, and just now getting around to some civil-rights legislation. Just now, after everything else is gone, out of the way, they’re going to sit down now and play with you all summer long — the same old giant con game that they call filibuster. All those are in cahoots together. Don’t you ever think they’re not in cahoots together, for the man that is heading the civil-rights filibuster is a man from Georgia named Richard Russell. When Johnson became president, the first man he asked for when he got back to Washington, D.C., was “Dicky” — that’s how tight they are. That’s his boy, that’s his pal, that’s his buddy. But they’re playing that old con game. One of them makes believe he’s for you, and he’s got it fixed where the other one is so tight against you, he never has to keep his promise.

So it’s time in 1964 to wake up. And when you see them coming up with that kind of conspiracy, let them know your eyes are open. And let them know you — something else that’s wide open too. It’s got to be the ballot or the bullet. The ballot or the bullet. If you’re afraid to use an expression like that, you should get on out of the country; you should get back in the cotton patch; you should get back in the alley. They get all the Negro vote, and after they get it, the Negro gets nothing in return. All they did when they got to Washington was give a few big Negroes big jobs. Those big Negroes didn’t need big jobs, they already had jobs. That’s camouflage, that’s trickery, that’s treachery, window-dressing. I’m not trying to knock out the Democrats for the Republicans. We’ll get to them in a minute. But it is true; you put the Democrats first and the Democrats put you last.

The Dixiecrats in Washington, D.C., control the key committees that run the government. The only reason the Dixiecrats control these committees is because they have seniority. The only reason they have seniority is because they come from states where Negroes can’t vote. This is not even a government that’s based on democracy. lt is not a government that is made up of representatives of the people. Half of the people in the South can’t even vote. Eastland is not even supposed to be in Washington. Half of the senators and congressmen who occupy these key positions in Washington, D.C., are there illegally, are there unconstitutionally.

I was in Washington, D.C., a week ago Thursday, when they were debating whether or not they should let the bill come onto the floor. And in the back of the room where the Senate meets, there’s a huge map of the United States, and on that map it shows the location of Negroes throughout the country. And it shows that the Southern section of the country, the states that are most heavily concentrated with Negroes, are the ones that have senators and congressmen standing up filibustering and doing all other kinds of trickery to keep the Negro from being able to vote. This is pitiful. But it’s not pitiful for us any longer; it’s actually pitiful for the white man, because soon now, as the Negro awakens a little more and sees the vise that he’s in, sees the bag that he’s in, sees the real game that he’s in, then the Negro’s going to develop a new tactic.

These senators and congressmen actually violate the constitutional amendments that guarantee the people of that particular state or county the right to vote. And the Constitution itself has within it the machinery to expel any representative from a state where the voting rights of the people are violated. You don’t even need new legislation. Any person in Congress right now, who is there from a state or a district where the voting rights of the people are violated, that particular person should be expelled from Congress. And when you expel him, you’ve removed one of the obstacles in the path of any real meaningful legislation in this country. In fact, when you expel them, you don’t need new legislation, because they will be replaced by black representatives from counties and districts where the black man is in the majority, not in the minority.

If the black man in these Southern states had his full voting rights, the key Dixiecrats in Washington, D. C., which means the key Democrats in Washington, D.C., would lose their seats. The Democratic Party itself would lose its power. It would cease to be powerful as a party. When you see the amount of power that would be lost by the Democratic Party if it were to lose the Dixiecrat wing, or branch, or element, you can see where it’s against the interests of the Democrats to give voting rights to Negroes in states where the Democrats have been in complete power and authority ever since the Civil War. You just can’t belong to that Party without analyzing it.

I say again, I’m not anti-Democrat, I’m not anti-Republican, I’m not anti-anything. I’m just questioning their sincerity, and some of the strategy that they’ve been using on our people by promising them promises that they don’t intend to keep. When you keep the Democrats in power, you’re keeping the Dixiecrats in power. I doubt that my good Brother Lomax will deny that. A vote for a Democrat is a vote for a Dixiecrat. That’s why, in 1964, it’s time now for you and me to become more politically mature and realize what the ballot is for; what we’re supposed to get when we cast a ballot; and that if we don’t cast a ballot, it’s going to end up in a situation where we’re going to have to cast a bullet. It’s either a ballot or a bullet.

Malcolm X had the democratic party’s number: they depended on black votes but consistently came up with excuses why they couldn’t get anything done about Jim Crow. It sounds, to me, a lot like Barack Obama’s wringing his hands about how he couldn’t end the war in Afghanistan or Iraq, or close Gitmo: it was those damn dixiecrats, still at it, 50 years later. See also Howard Zinn on “The Southern Influence in American Politics” [stderr]

I’ve always been disappointed that the hispanic vote bloc and black vote bloc can’t seem to get their divisions behind them and begin to operate practically as a third party; they could make demands because they’d be crucial in putting anyone into or out of the white house. Especially since “no longer give a fuck” has become a pretty large vote bloc too. They could literally take over US ‘democracy’ if they pulled the levers of power effectively. That’s interesting, isn’t it? White America sees black people as “black people” – you know, a solid mass but in fact they’re humans like any others: politically divided and carrying a large proportion of apathetics.

Trump’s Modi Operandi » « I Already Did Not Like Him