I get lots of emails offering “guest articles” for blogs. By which they mean that they’ll pay me to post some bullshit marketing stuff as though I wrote it.

I’m sorry but you lot will continue to get exactly what you pay for. Which is, um… OK, that’s not the best way to put it. Anyhow, you’ll get the Authentic Marcus Experience(tm) whether I can help it or not.

In case it has escaped you, the internet is mostly bullshit, now. You should assume that anything that you see, which has a feedback or review process, or a content promotion algorithm, has been jiggered worse than a North Carolina election-map. Every part of the system has been suborned and nobody should trust any of it. Perhaps some of you recall back when I was still on Twitter and purchased 14,000 followers [stderr] – this is open, dishonest, bullshit. Welcome to the world of open, dishonest, bullshit – we will never escape now.

My inbox this morning: 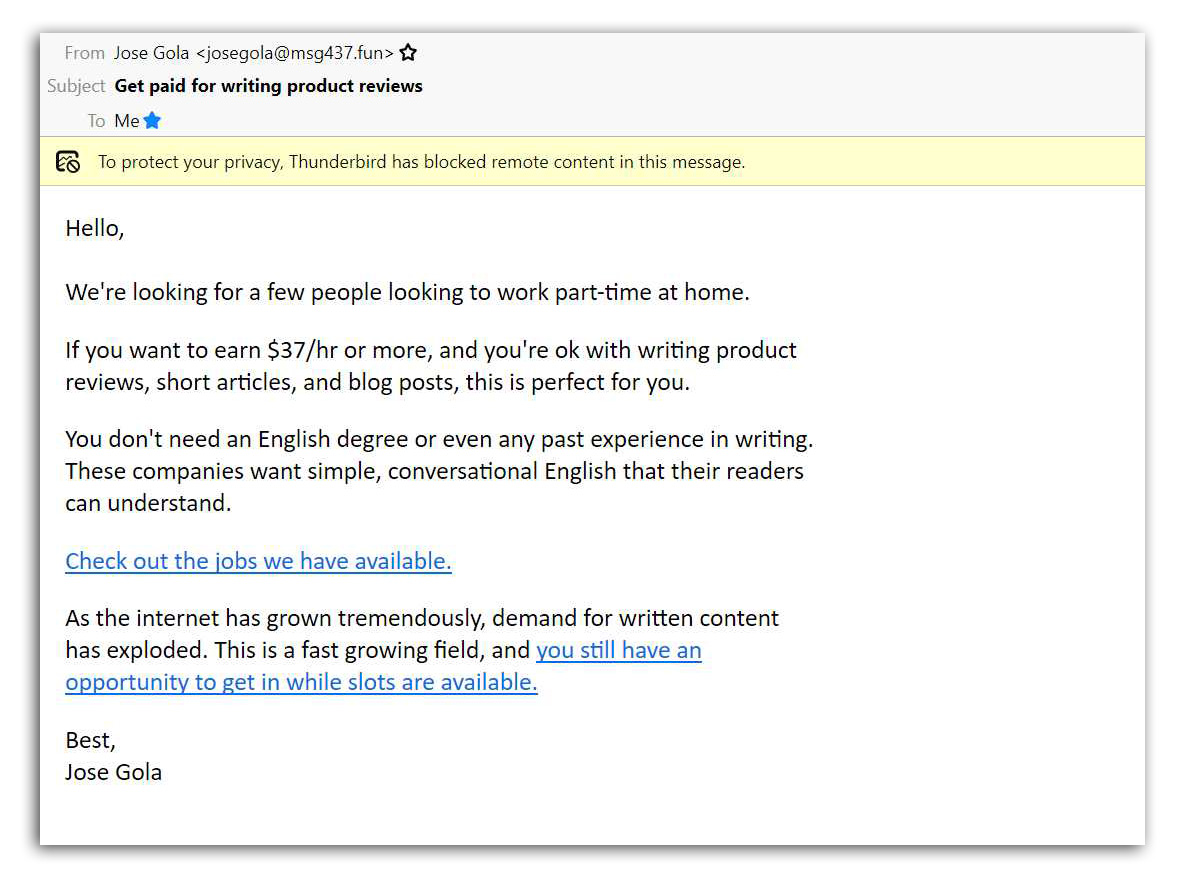 I am actually tempted to sign up to do that. It might be fun to write reviews that were surreal. The problem is, nobody’d notice it in the other, great torrent of effluent that is the internet. But imagine how fun it would be to write reviews like: [on a table saw] “I loved it. My son, who is 5, did not, but the doctors are giving him a good chance of recovering. This product is one of the best pieces of cheap, unsafe crap I have ever used! If you ever need to murder someone, give them one of these. 5 stars!”

The current trend in online marketing, now that they have realized that they have crapped-up all the avenues for crap, is to suborn content-creators into crapping up their content. Thus, I have to listen to my favorite podcasters humiliate themselves by pretending to be impressed by some stupid product or other, which I know they are not. Some of my favorite youtubers and podcasters have lost me as a listener; I’ve got better things to do with my time than polish my hatred to a glittering edge listening to them spout marketing words that someone put in their mouth. I doubt very much that Malcolm Gladwell will ever read this but, just in case: “@Malcolm Gladwell: Seriously, dude, after a couple bestsellers and a good career, do you need to spit someone else’s marketing in my face? Why don’t you say no to their money and write another book or two with the time? You sound like a jackass talking about those products and services and I know you think you’re being ironic and funny but you’re just a sell-out, and a cheap one at that. Fuck you and all the outliers you rode in on.”

If any of you want to pursue that opportunity, here’s the link. [sell your soul] By the way their business is so legit and un-spammy that they had to conceal their site; go figure.

I did know a guy who, early on, made money going around to small businesses in his area offering them glowing reviews on yelp for a low price. Seriously, this was just a friendly old hippie on a bicycle, who’d collect $20 from restaurants and whatnot, and post glowing reviews from a plethora of identities at a local library’s public access internet terminal. Nowadays, that has been automated into being a big business.

Big media, which runs on a steady influx of bullshit, sometimes gets its surrealism on and kicks against the pricks: [buzzfeed]

Jessica – not her real name – has spent well over $15,000 on Amazon this year, buying everything from Halloween decorations to a queen-size inflatable mattress. She’s purchased over 700 products, including three vacuum cleaners, six desk chairs, and no fewer than 26 pairs of earbuds. And even though most of the products are cheaply made, she’s given each a 5-star review. The twentysomething who lives on the East Coast isn’t a bad judge of quality – the companies that sell these products on Amazon reimburse her for the purchases.

Although the loot may be free to her, Jessica’s habit does come with a cost – if you’ve considered buying an Instant Pot recently, her 5-star review, complete with photos and a video, might have nudged you toward a knockoff instead of the real thing. It’s entirely fake, but Jessica told BuzzFeed News she doesn’t think she’s gaming the system; she’s trying to help brands grow their businesses in Amazon’s massive marketplace. “I’m just a pawn in their marketing scheme,” she said.

What if someone did the scheme I suggested above, and wrote surreal fake reviews? Would someone complain that the lies were dishonest? “No, you’re supposed to lie like this not like that!” Does the marketing company have a leg to stand on? Of course they can still sic lawyers on you.

Third-party sellers know what it takes to make it on Amazon: Get good reviews and a high search ranking. But attracting genuine customers is tough, so some sellers use a reliable cheat – bribes. Because of Amazon’s vast scale, inscrutable algorithms, and capricious enforcement of its own rules, unscrupulous sellers and paid shills largely get away with it.

It’s actually worse than that: Amazon has been known to manipulate their search rankings to preference Amazon’s own products. So when someone games the search rankings, they are taking money out of Amazon’s pocket and that’s one thing Amazon is never going to tolerate: it’s their scam and don’t you dare play it.

I had an idea as I was driving down to see my folks on thanksgiving, which was to have a day in which consumers show their power by not buying anything. Just for one day. I would, naturally, make that day “black friday” – the day after thanksgiving. The day when nobody spends a cent. And everyone says “if you don’t back off on the marketing bullshit, we can do this for a whole month until you back off on the ads.” The sad irony I bumped up against was that, since I had only had the idea that morning, there wasn’t enough time to market it – to get it out there and get other people to sign up to promote it. Marketing against marketing? Ah, forget it, I have real work to do.

Fake review schemes rely on the reviewers being, for all intents and purposes, untouchable. Back when Amazon started their mechanical turk service, a friend of mine who must remain anonymous, hired units on mechanical turk to post comments to any blog posting or youtube video that a certain other person posted. The comments were not required to be well-written, but they needed to be insulting, negative, and originating from genuine sockpuppet accounts. And each comment, at the bottom had to say: “this comment sponsored by [deleted]” The entire program was not intended to push down someone’s ratings or anything like that – it was intended to push the target’s blood pressure to the point where their head exploded. I believe the entire program cost about $100. There are similar services to mechanical turk in south asia and China; perhaps next time one of you is thinking of tossing $100 into the FTB legal defense fund you’ll toss some money into buying Richard Carrier a few thousand real people who follow him and assiduously and creatively shit all over everything he says. It’d be funny except I think I just described Patreon.