Celebrity culture has always made no sense to me.

There’s a political/moral argument to be made for why nobody should take celebrities seriously; it goes like this: if you believe in equality, you ought to recognize that celebrities are just regular people who are maybe more talented or creative and in the right place at the right time. But, in that case, what we admire is what they do primarily, as it flows from who they are to whatever degree. There’s a good chance that what they are is nasty – because that’s easy to hide from the fans, and people change, and maybe they have moods like the rest of us. If you’re not egalitarian, then you’re left believing there is something super special about certain people – including all their warts.

I learned this early from Bob Dylan. Not because Dylan’s a friend of mine, or anything, but I remember his amazing interviews with the San Francisco press, when he was first becoming famous. The press were trying to access his celebrity, but Dylan was trying (as it appeared to me) to get them to come to grips with who he was. They were trying to interview a celebrity, and Dylan was being a musician. He wanted his music to speak for him; they wanted to know what kind of cigarettes he liked. It was a crucial lesson in the vacuity of celebrity culture and I never have forgotten it. Dylan is rightly famous for his music and song-writing, and everyone who was trying to come to grips with him on any other axis was just being a shallow fool. I believe that’s a fairly common experience for some celebrities – they want to keep things real, and thoughtless fans and media simply want to wrap themselves in iconography.

Youtube and instagram and (formerly) MTV celebrity culture feast on vacuous iconography and marketing spin. There’s a creative reality behind it: some of the objects of attention are super-talented artists but some are not: the Monkees and Milli Vanilli, Vanilla Ice, and Nickleback come to mind. Celebrity culture builds them up as a puffed up what they are that conceals their reality. Somewhere in the celebrity framework is religion and politics – some celebrity politicians have a great difference between what they are and what they appear to be. I’d say that the degree to which a person is pure celebrity (as opposed to a talented creative individual) depends on the degree of difference.

There’s something about some people that appears to prep them to be followers, rather than creative in their own right. I don’t spare any respect for a rabid Bob Dylan fan, who just wants to be in his presence, but I’m thrilled to sing along with any amateur guitar player who wants to play One More Cup of Coffee around a camp-fire. I don’t understand the people who fall for the glamour of celebrity rather than the actions of the celebrity for which they are celebrated. The first question the journalist asks Dylan is “what poets do you dig?” Apparently too ignorant about the celebrity to know that he renamed himself after poet Dylan Thomas; perhaps that is an answer.

I was listening to the Diamonds In The Sky episode of the Snap Judgement podcast [sj] which is a harrowing description of how a bunch of journalists and hangers-on were invited to tour with Rihanna on a private 777. It became a sort of mini-Fyre festival: they were expected to sleep on the plane, everything and everyone was always late, and Rihanna spent her limited amounts of free time hanging out with her A-list celebrity friends, and the journalists only got to see her on two quick walk-throughs. Naturally, they were unhappy, but they were afraid to voice it because they were afraid they would lose future access to the great star. So they drank themselves into a stupor and waited for it all to end. It’s a fascinating episode because you can really feel the pain of these people, who were trapped in a situation where they had to confront their ideal of the star, and the reality of the star. Rihanna’s very pretty and talented and rich, without a doubt, but one thing that is also completely obvious is that she hasn’t got any time for a bunch of star-struck millenials who think they’re journalists.

For the record: these are my aesthetic judgements. This is all my opinion; I’m sure there are people out there who think Rhianna is awesome, and others who don’t. I have a strong aesthetic that performing artists should not be over-produced, over-stage-managed, theatrical fakes. Everyone who has ever known a musician knows that they’re mostly struggling to get paid, and it’s a dream to be a famous celebrity like Rihanna, so – more power to her. But I personally draw a distinction between the public face and the reality. I couldn’t name a song by Rihanna if you put a gun to my head, but I’ve seen loads of pictures of her getting in and out of expensive cars. Perhaps that’s her art-form. 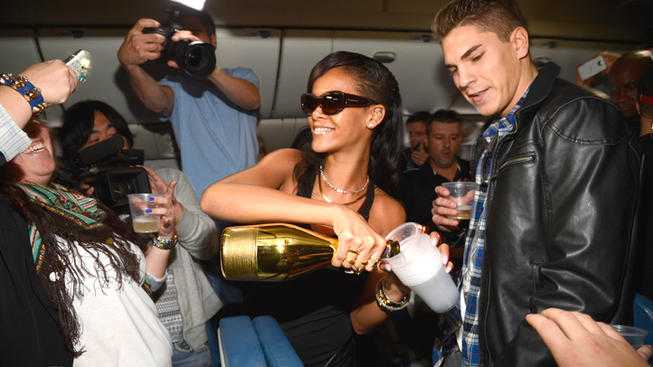 At around 30:00min into the podcast, the interview becomes about the journalists’ reactions to confronting the reality of the difference between the celebrity and the person. They realized that they never met the person; all they were left grappling with was the puffery and augmented glamour reality. The overall take-away seemed to be that none of them felt they could tell about what a shitty scam was pulled on them, because they were afraid that, if they ever did meet Rhianna, she’d not talk to them. What an abusive relationship; what kind of submission is required to be a journalist?

I came back with more of an obsession with Rihanna, which I didn’t expect at all. I thought I’d have enough self-possession and dignity to hate her afterwards, but that was false.

If one of your ordinary friends treated you that way, would you tolerate it?

This is more of the voluntary human servitude that De Boétie writes about [bd] – the same mechanism is in play, here, as when the royalty of ${wherever} dress up in expensive stuff that they took from the people, and prance around – and everyone smiles and cheers.

To achieve the good that they desire, the bold do not fear danger; the intelligent do not refuse to undergo suffering. It is the stupid and cowardly who are neither able to endure hardship nor to vindicate their rights; they stop at merely longing for them and lose through timidity the valor roused by the effort to claim their rights, although the desire to enjoy them still remains as part of their nature. A longing common to both the wise and the foolish, to brave men and to cowards, is this longing for all those things which, when acquired, would make them happy and contented.

It seems to me that that’s the essence of star-power, as well. Shorn of the glamour, are they still talented and interesting? Or, were they talented and interesting once upon a time, before they were suborned into the corporate profit-making machinery? The greatest of the stars are the ones that “sell out” big at the height of their game, and build a massive production company around themselves, that ensnares and enraptures the members of their audience who long for something. What I find sad is that those members of the audience don’t see that the star has probably moved far from what justified their stardom in the first place. I continue to see Bob Dylan as a complex sort of counter-example: he’s got amazing star-power but he’s been on the road delivering masterpieces more or less constantly since he was a kid. He’s undeniably good, and never rested his reputation on kissing the media’s ass, or had a make-up line.

As I’m writing this, I’ve been watching The Boys, which also has some pointed by-play about the relationship between celebrity and reality: the superheroes are cynical, violent, fakes – except for the ones that really are super-powered and psychopathic. In a time when we live with a fake star in the US White House, it’s a bit heartening to see that there are some people willing to subliminally explore the interplay between star glamour and the reality of being a star.

To me, venerating big stars for their stardom is like venerating a bottle of ketchup for the beauty of its label. Worse, it’s participating in a sort of ritual sacrifice of the artist, in which they are exposed and eventually destroyed for the gratification of their fans.

None of this should be construed as criticism of Rihanna. She’s done her thing and she’s good at it. I have done speaking tours which were far more low-key and easier than the kind of performances she’s putting on, and I can’t even imagine how tiring it must be for her to make the nightly performance of being herself. I wonder whether, sometimes, she wants to take off her mask and be whatever’s behind it, or has she grown into that mask so thoroughly that all there is, is emptiness?

I hate the degree to which marketing has made everything it touches fake. Why can’t they sell what’s good and real? Please don’t tell me there’s not enough good, real, stuff to go around.

Celebrity life takes people in and chews them up and spits them out. I’m sure that someone like Dylan, who has toured all his life, has developed a very strong inner core of his sense of self; we see that sometimes in flashes that – I have to admit – appear as moments of him hating his audience. But how can someone sit there and get brain-addled over, let’s say Britney Spears, and know that her star-life is going to make her crash and burn, and then they shift their attention to the next one? It’s a fucking cruel grand guignol spectacle, is what it is. As Ray Wylie Hubbard (who has been touring for a long time, too) says, “Rock and Roll is a vicious game.”

[Verse 4]
So now it’s tattoos and piercin’s and leathers and groupies
And managers, and agents, lawyers, publicists and chauffers
And the party’s never gonna end as far as anyone can see
And then a friendly stranger shows up and says, “The first one’s free”

[Verse 5]
And now the band has become the darlin’s of the media – they’re all the rage
And there’s hysteria and public appearances and fistfights backstage
Ah, it seems the gods have smiled upon the band and have embraced them hell-bent
So now it’s carte blanche, ’cause money talks even in hell

[Verse 6]
And then comes E.R.s and stomach pumps and machines that kickstart the heart
And the band breaks up and the bass player O.D.s as the album reaches number one on the Billboard charts

More Shots Fired in The War on Reality » « Rewriting The Holocaust