Just a couple of quick shots and some comments on grinding.

When you do a damascus/core/damascus weld-up, a big piece of the game is getting the core in the right place. If it gets bashed too hard and goes out of position then you may wind up with a piece of something on the edge of the knife that is not core – and that’s super bad if you’ve used facings (like wrought iron!) that won’t harden. Then you’ve got a dead spot in the cutting edge and you may as well throw the whole thing away if you can’t grind it back. If you look a bit south of midway you can see one of those spots but I’m not worried about it because final shaping and polishing will pull that back some. It won’t be where I want it but it’ll be acceptable.

So, usually what you do is quench the blade, temper it, then do a rough grind for where you think the edge is going to be, then etch it and see what it looks like. It’s one of the moments of truth. 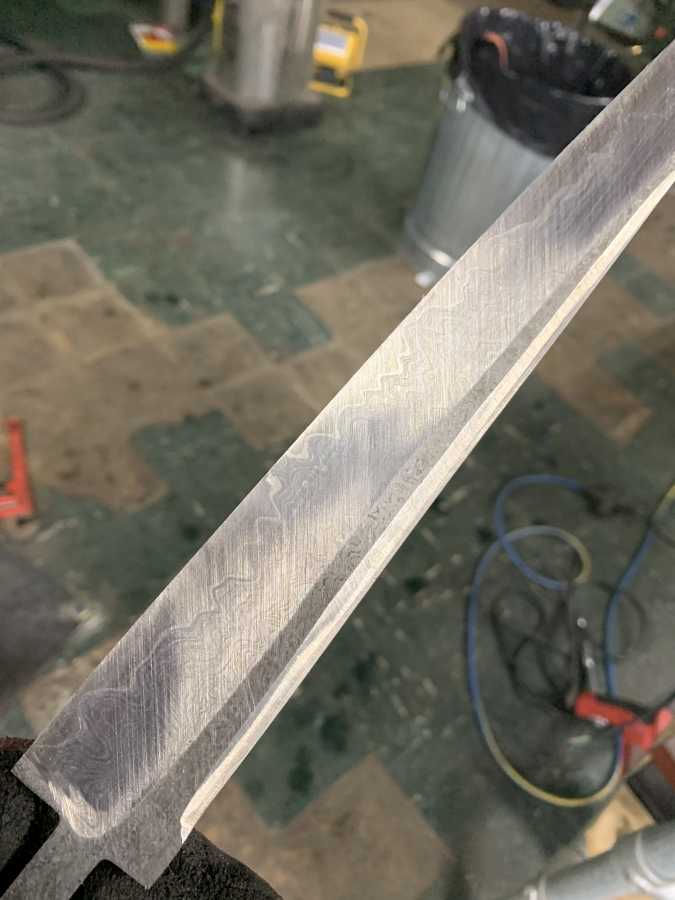 That’s the edge of the huge pwning knife. It looks like everything is in place. That’s just one side of it but the other side looks OK, too. Sometimes you have to adjust which side gets more metal removed, and then you have to flatten the side more, which is a fraught operation.

You can clearly see the nickel transition line that I put in there. Best of all, there are no big holes in the welds. It all looks good and tight, which is nice because the side-pieces were cut and stacked and welded a total of 3 times to get that much layering.

My faux suminigashi on the sides is a mixture of stuff and it’s super tough. Getting scratches out of it turns out to be exceedingly unpleasant. Oh, well. 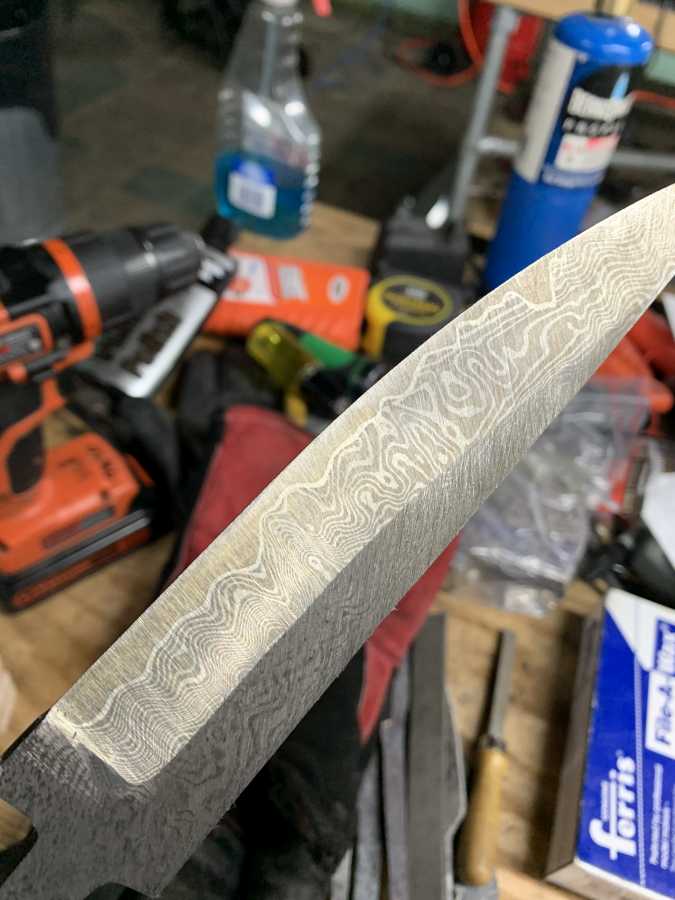 That is the one with twist damascus on the sides, ground back to show the 1095 core and transition line. That thing is going to look wild after it’s parkerized or etched or soaked in coffee. The twist should turn into mad black and silver.

Again, everything appears to be placed where I wanted it. I’m going to call that a successful operation. Best of all, both blades quenched straight and hard and true and I’ve tempered them back until they are springy and tough. At this stage, I usually get frustrated with polishing out scratches and let them sit on the bench for a while to see if the scratches just sort of … come out on their own. So far that has not happened but you never know!