Charly suggested stainless steel hose clamps, as an easy way to keep large chunks of wire rope from fraying while being chop-saw’d.

Well, they’re re-usable and they really hold well. It’s a lot nicer than wasting lots of steel wire and farting around with twisting it and clipping it. 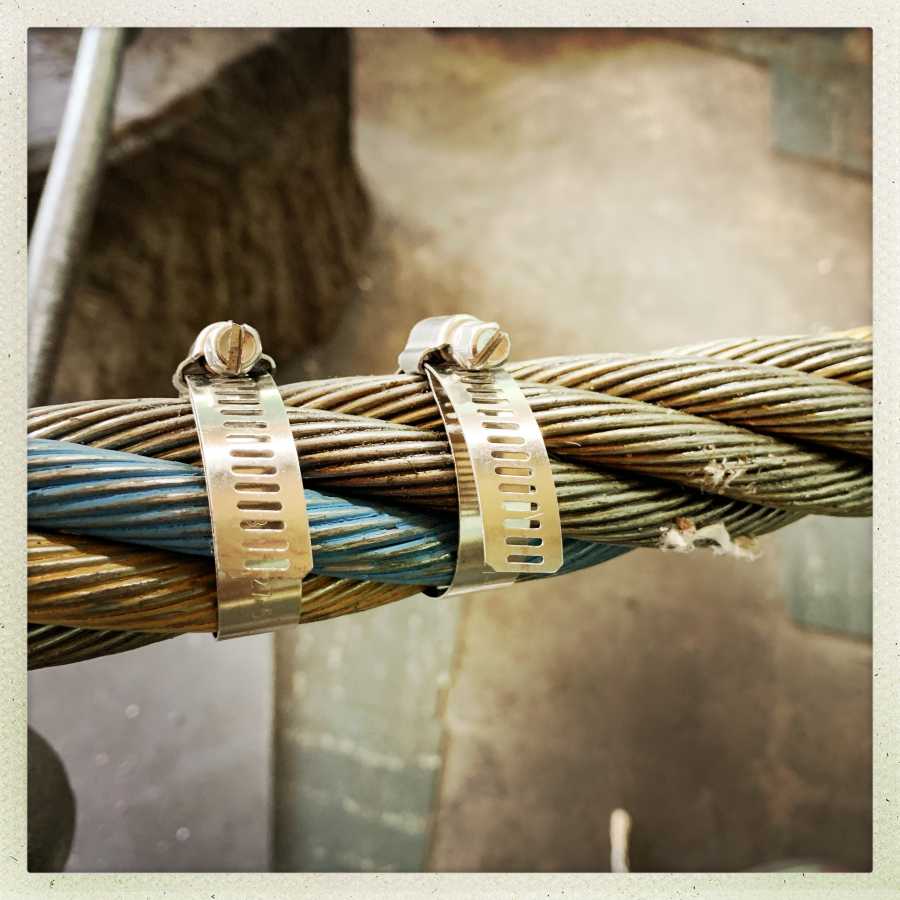 The main thing is to keep the strands from coming apart, because if they do, I wind up with a puddle of screaming hot 7″ long wires on the floor. This way they don’t come apart and I can take the MIG welder and stick the ends together so they won’t unwind in the heat. Some day I may try just leaving the hose clamps on, because the stainless won’t stick to the high carbon steel, but it will certainly ruin them if I run them under the press. 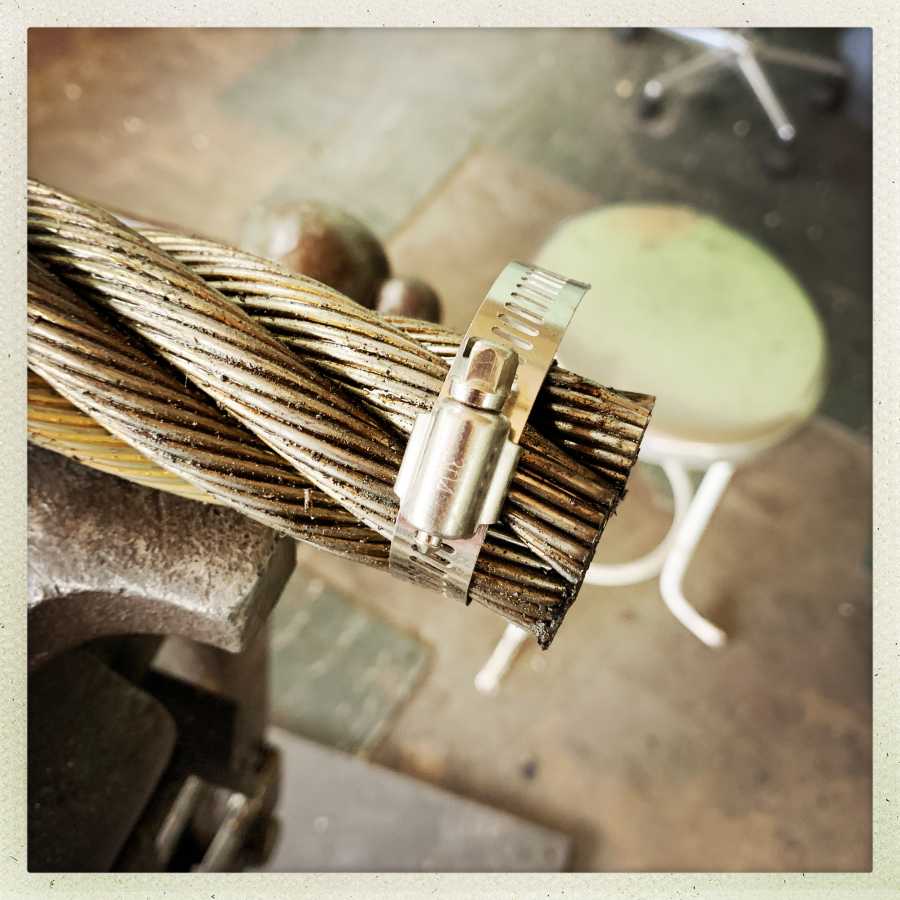 When you put the chunk of rope end-up in a machinist’s vise and start welding the top together with the MIG, it gets hot and the thick grease that fills the strands leaks out into a big stinking hot puddle that can catch fire and smoke. On the other hand, it’s a source of carbon and when you put it into the furnace, it helps act as flux. It also stinks and fills the room with smoke, albeit briefly. 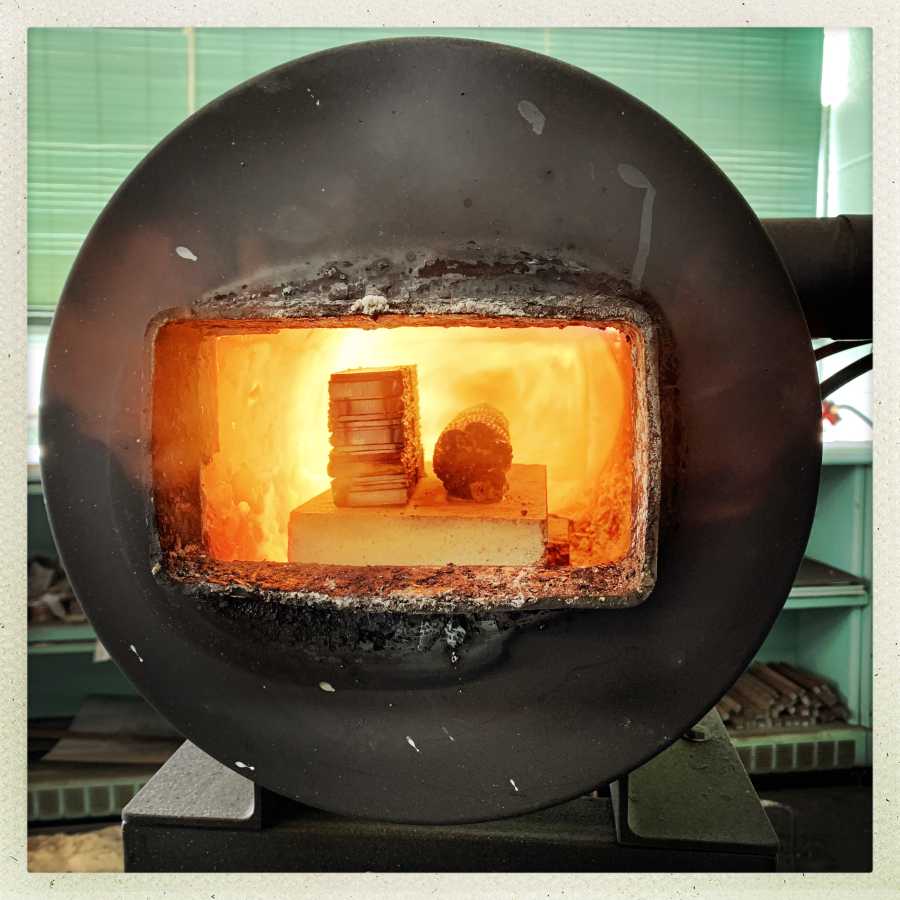 The forge hasn’t come up to heat, yet, so things are not glowing. When it’s at welding temperature, everything is yellow-orange, even the fire-bricks and (especially) the billets. The flux bubbles and sizzles on them like grease. Then, you just reach in with some big strong tongs and pull out 10lb of screaming hot metal and put it in the jaws of the press for a nice squeeze.

After a bunch of squeezing and occasional hammer-blows to correct its straightness, the stack of pieces of separate metal slowly become a single piece of metal. I did not photograph the cable, because I wasn’t planning on posting pictures of that operation (it’s pretty ordinary to me, now) but the rope slowly turns into a rectangular bar about twice as long as the original chunk. Usually I cut it in half to make it easier to handle. The stack of pieces is about 20 pieces of various stuff, 3″ tall and 4″ long. By the time it was ready to put in the annealing bin it was about 1″ tall and 9″ long. When it’s cool and soft I’ll bandsaw it into 4 or 5 chunks, surface grind the faces, stack them, and re-weld them into another bar, which will be 80 or 100 layers. 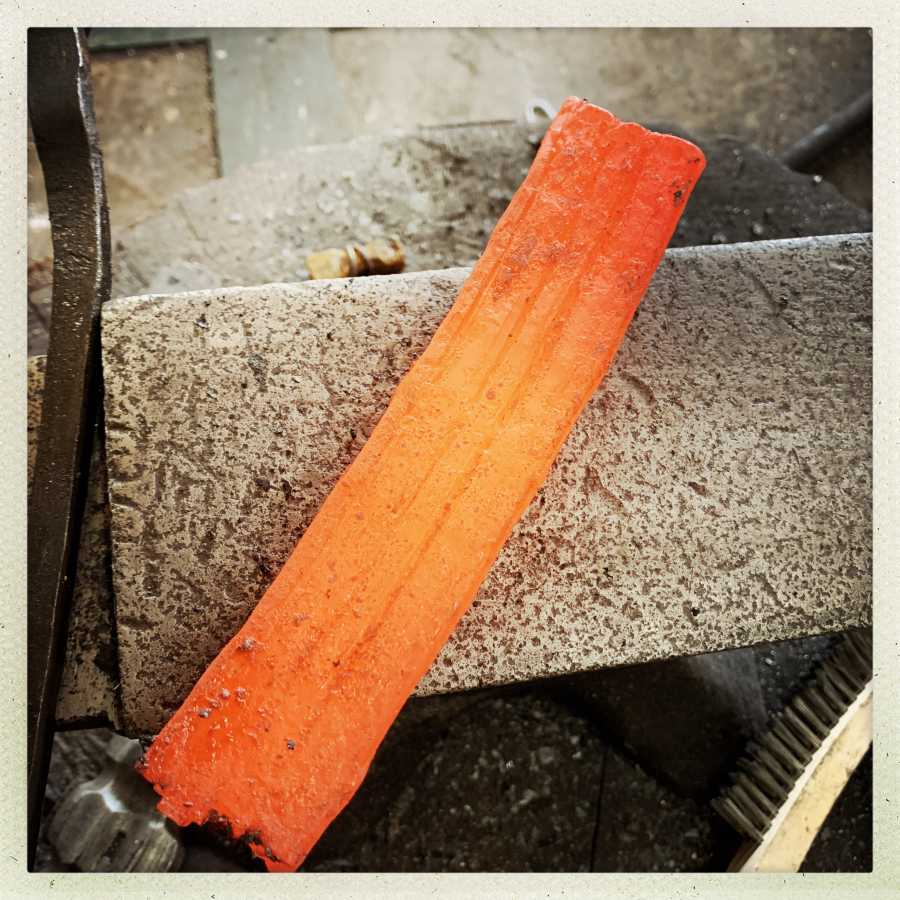 That’ll be good for bandsawing into more pieces and welding those on either side of some high carbon steel to make 3-layer composite blades; it’ll make 5 or 6 small blades or 2 or 3 larger ones. Part of why damascus steel is expensive is because you’re turning a lot of steel into carbon dioxide. There’s also effort, time, and operator risk.

That stack is an experiment in making something that ought to look like Japanese “suminigashi” (jewel steel); it’s a variety of things: W-2, 1095, cheap steel from the hardware store, and 15N20. Because the different layers will have various nickel content and hardness, the metal will polish to reveal a subtle pattern, which can be brought out more clearly with an acid etch or parkerizing (etching in phosphoric acid and manganese dioxide).

This is what passes for “a really fun afternoon, in badger-land.”

Thanks again, Charly! You saved me 15 minutes and some wiring, which is always nasty unpleasant business.

When you pull a chunk of hot metal out of the forge with tongs, it’s going to want to flip in the tongs straight toward you which means you really need to keep an eye on what’s happening and be prepared to get your feet out of the way if you lose a grip on the damn thing. It’s not just hot, it’s heavy – you’re holding 10lb of steel at arm’s length, plus the length of the tong handles, and it’s acting like a Type 1 Lever. It’s good exercise for those rotator cuffs, believe me!

In the time it took for me to get my glove off, grab my phone, and snap the picture of the billet, it probably raised the temperature of that piece of my anvil to about 750F – hot enough to set your hand on fire. [no, literally, the fat will ignite] It does not show, at all. I rarely have people in the shop when I have the heat up, because I’m afraid someone will do something like try to sit on the anvil. Usually, if I have a guest in the shop I make a point of squirting water on various things so they can see that water just explodes into steam before it even hits the billet. It’s an unforgettable lesson. “It’s polite and a good idea to keep your hands in your pockets” in a blacksmith’s shop.

Speaking of Cruise Missiles » « About That Stealth…?