The disaster that is looming ahead of us is nebulous, and its vagueness has made it incomprehensible: we focus on a few signs and indications and hope that better heads and wise leaders prevail.

What are those better heads? And who are those wise leaders?

We’ve got mountebanks like Elon Musk, telling us that we should try to terraform Mars (given what a great job we are doing terraforming Terra, why would anyone expect the crew of Musk’s lifeboat to experience anything but a cold lonely death?) and we have leaders holding meetings to thrash out resolutions that have gigantic backdoors built into them for campaign contributors and the military. The techno-ignorati and mountebanks have glad-handed civilization along, long enough, that when the motherfucker catches up with us, it’s not only going to be too late, it’s going to be emotionally traumatic when the whole thing sinks in. Not that that will make the slightest bit of difference.

“The Motherfucker” is how I have come to think of it. [This stuck in my mind from an old rant by Henry Rollins in which he called El Nino “The Motherfucker”; I think that it’s more appropriate for climate change in general]

It is not “sea level rise” because we could cope with that; it would just suck a lot. It is not “dead zones in fisheries” like the Bay of Bengal (food source for tens of millions of people) becoming a deoxygenated septic tank with no fish in it, or the Gulf of Mexico being a biological wasteland at certain depths, thanks to the gigantic uncontrollable oil spill from Deepwater Horizon (200 million gallons and still leaking) and it’s not the massive flooding that is tearing up the Mississippi’s surroundings – New Orleans is one more flood away from being a dead-zone and the dams in the area are being furiously vented into farmland to prevent the city’s levees from getting hit with more pressure than their jury-rigged repairs can handle. After all, it was an election year when they did the repairs – no sense letting another party get into office and take the credit – so both parties will wring their hands and point their fingers when the city is obliterated and tears down the US insurance industry with it. Good riddance to those bastards, anyway; it’s just too bad they won’t be able to grace the elegant wrought-iron lamp posts of New Orleans’ Vieu Carre. 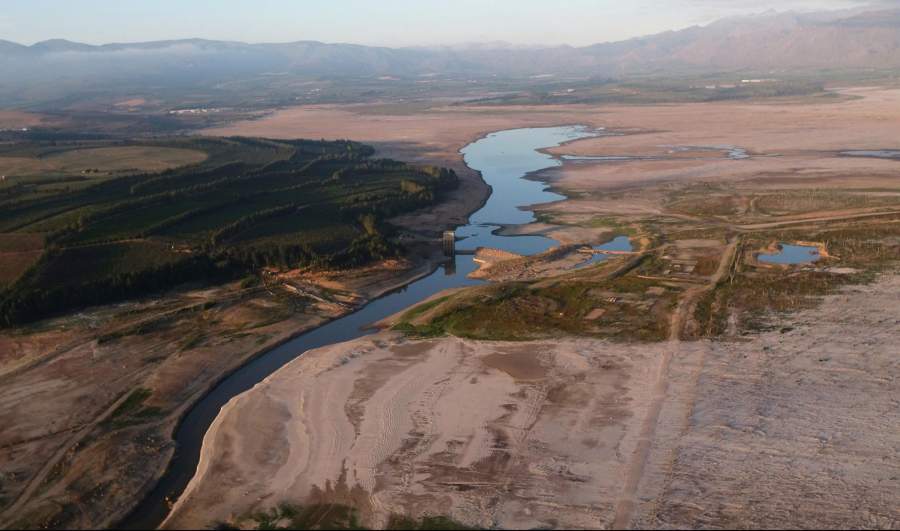 We’ll never get to see Mitch McConnell swim; like John McCain and pappy Bush and Reagan, they’ll die comfortably in some bed of some disease that’s reserved for rich old people. They may be the last generation (I hope I am) that gets to die like that; in the benighted religion-addled middle ages that self-hating perverts like McConnell fetishize, the high and the low wound up in the same rotting heap outside of town when the plagues came through. That’s how it’s going to be again. It’s as if A Canticle for Liebowitz was optimistic, or something. 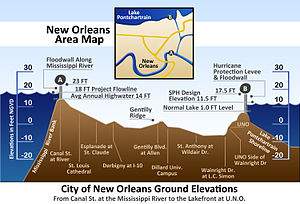 Of course it’s going to be worse for the powerless. And the powerless that are going to take it on the chin hardest are the ones that have been afflicted with generations of corrupt politicians who have continued to sell them down the river. South Africa is an obvious example: ruled for generations by imperialist racists, the locals were literally treated as disposable. Comes a time when it turns out that the extractive rulers didn’t worry about infrastructure, just keeping the poor in line. Does that sound familiar? 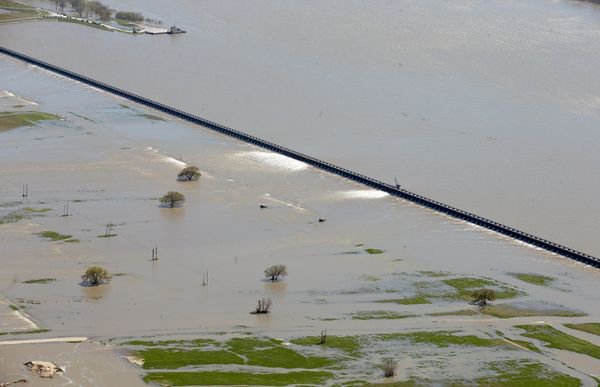 Right now, at this moment, huge amounts of water are being released into farmland elsewhere in the delta, to bring the water-level down so it doesn’t overwhelm the levees again. Following the last disastrous flood of the city, the minimum was done so that victory could be declared – and the poor shrugged, dusted themselves off, and started rebuilding. You know those “infrastructure” bills that Washington’s elite are wringing their hands over: this is the “infrastructure” they are talking about. That and New York, Miami, Boston, and New Jersey. New Orleans’ pumping stations date back to the 1920s, which is probably not a bad thing, since they knew how to engineer in those days – imagine what it’d be like if the city was depending on crap made by the beltway bandits who brought us the F-35? Right now, farmers are watching the US Army Corps of Engineers decide whether or not to open the Morganza spillway and flood 25,000 acres of farmland above Baton Rouge, to prevent the city from being inundated. The Bonnet Carre spillway has already been open for weeks.

That’s going to impact crops. The silt probably won’t help the Gulf of Mexico, but it’s probably already beyond repair. 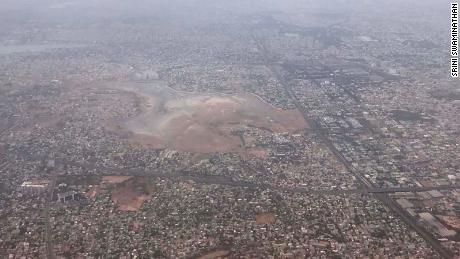 That is Chennai’s main reservoir. What is not there? Water.

As the US midwest floods, parts of India are taking it on the chin, hard. India is experiencing one of its worst heat-waves in recorded history. [cnn] It’s so hot that people have to just lie there and not do anything: the heat will kill them if they exert themselves. Lying around in a wading pool would be an ideal option for the 4.6 million people in Chennai, which is also experiencing one of the worst droughts in recorded history. One of the problems with advanced civilization is that it allows us to build more complex interdependent systems, and push the failure-point farther away.

When The Motherfucker hits, it’s bigger and badder. That’s the problem with kicking the can down the road.

Today I was listening to a podcast where an experienced journalist was interviewing an energetic young person about the “Green New Deal.” They had lots of pointed questions about practicality, where the money was going to come from, etc. The young person sounded sincere and – I’m sad to say – ignorant. It’s not enough to say “we have a program of social reform that includes climate change” – they’re going to be pecked to death by duck-quacking questions like “where is the money going to come from?” [I have a suggestion for that] the reporter was oh, so practical. Because our stupid species dying out is really something we need to be practical about. The young person should have told the journalist about The Motherfucker. There’s nothing practical about what’s coming and radical responses probably won’t even be enough. Placing our faith in politics turns out to be a bad move because politics means “politics as usual” which is a lot of what got us to this situation in the first place.

When I think about this stuff I start to go into a panic. I also begin dropping pieces of information that I simply can’t cope with; I have to pick them back up later and try to look at them carefully. When I tried to learn what the current leak-rate from Deepwater Horizon looks like, I stumbled across another one that (naturally) was not big news: MC 20 Saratoga. [poo]:

Back in November last year, the US Coast Guard directed Taylor Energy to implement a new containment plan which “must eliminate the surface sheen and avoid the deficiencies associated with prior containment systems.”

“Surface sheen” means “visible on the surface” i.e.: let it keep leaking so long as it’s not making a great big plume of oil.

That’s what the dead zone in the Gulf of Mexico looks like, last year. No surprise: it’s bigger than the year before: 2,900 square miles. That’s a gigantic region of anoxic water – something swims into there, it dies and falls to the bottom where it sits. It’s going to make a lot of fossils, someday.

If I sound a bit panicky about this, it’s because I am. The American public seems to be focused on sea-level rise, because that’s important, but it’s only one manifestation of a vast set of interconnected problems, each of which is disastrous. For example, the arctic permafrost was considered “possibly going to be melting within 70 years.” Well, it’s already well on its way, today. [ew] With that comes the terrifying possibility of frozen methane being released, which will cause firestorms and breathing “dead zones” on the land, in addition to releasing massive amounts more carbon. That’s the hypothetical “runaway feedback loop” that takes us right into the Permian Extinction scenario and it looks like we are in the early stages of that happening. Meanwhile, the US says it doesn’t expect its carbon emissions to start to go down until around 2050 and we’ll be lucky if there’s a reduction in the rate of increase. That isn’t going to make a whit of difference if the methane starts dumping into the atmosphere because it’s going to outpace human emissions and will continue to do so for centuries, since there aren’t even good models for when/if the planet starts to cool back down. [ls] 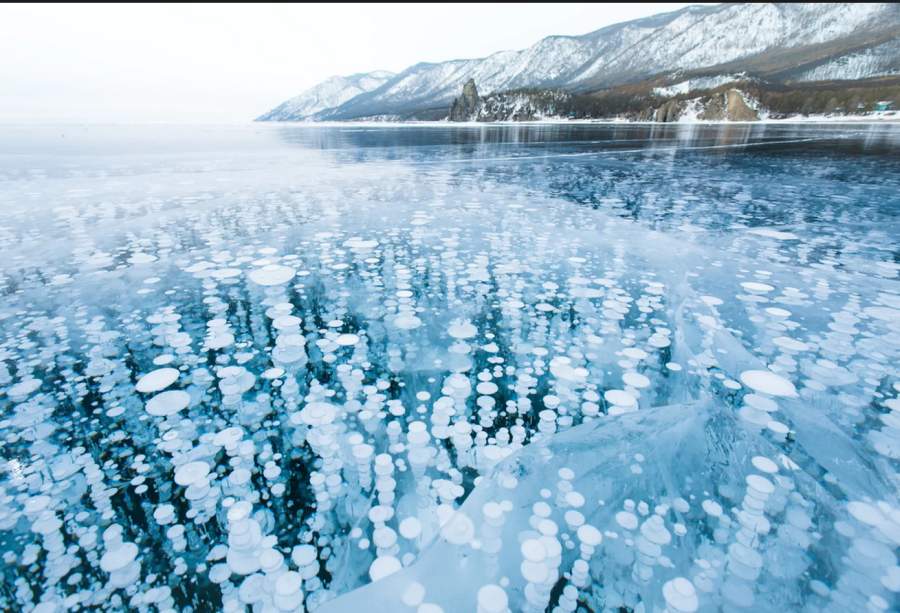 Methane bubbles in the ice in an arctic lake

All day long, the surface of Esieh Lake in northern Alaska shudders with indigestion. This Arctic lake never fully freezes. Stand next to it, and you’ll hear it hiss. Watch it, and you’ll see it boil with ancient, bubbling gas. Light a fire over it, and the lake will fart a tower of flame higher than your head.

Another tocsin is this: right now we’re at about 460 parts per million of CO2 in the atmosphere. At around 600 parts per million, people begin to experience rapid cognitive decline. We don’t know what kind of permanent damage it does, but when you don’t have enough air getting to your brain, you get stupid. [yale] When it gets up around 1000 parts per million, you start to get slow and lazy and head for a coma and death. Some estimates show the “die” part happening around 2100AD if the worst-case carbon scenario happens. The best-case is not going to happen, the “not so horrible case” still puts some of humanity into brain-damage territory for hundreds of years and the case that the ICC thinks is most likely has everyone headed for cognitive decline and brain-damage starting around 2050AD and getting worse until 2100AD. Remember, 2050 is around the time the US strategists think we might be able to start turning down the increase rate of our carbon release. By that time, China’s going to be blasting out way more carbon than the US. Perhaps the US and China’s strategy is “when people start to die in large numbers” we won’t have as many people driving cars. 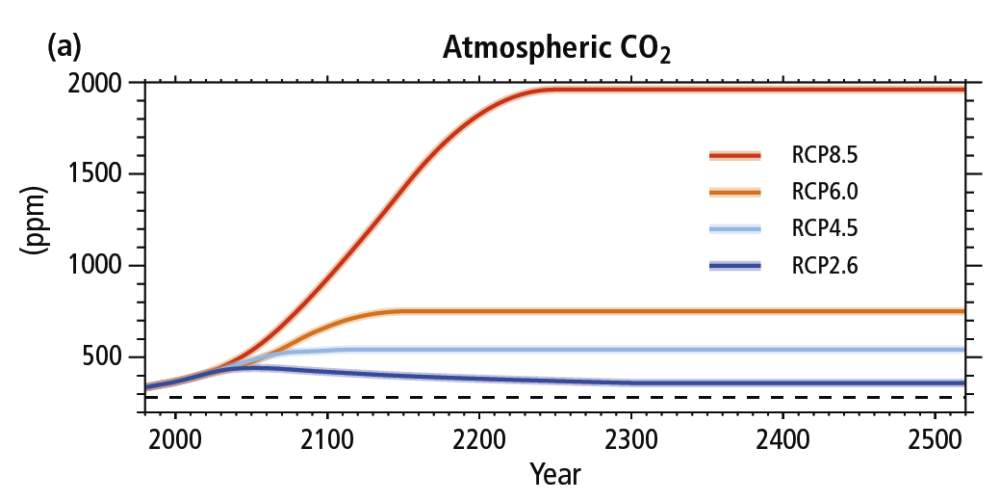 The current trend-lines don’t significantly separate until a while after 2050, which is around the same time that parts of the planet become uninhabitable and there are mass die-offs. The RCP8.5 scenario is runaway thermal feedback from methane release – which is the scenario we’re actually heading toward. That puts Permian Extinction 2.0 happening around 2100AD and completing by 2200AD. 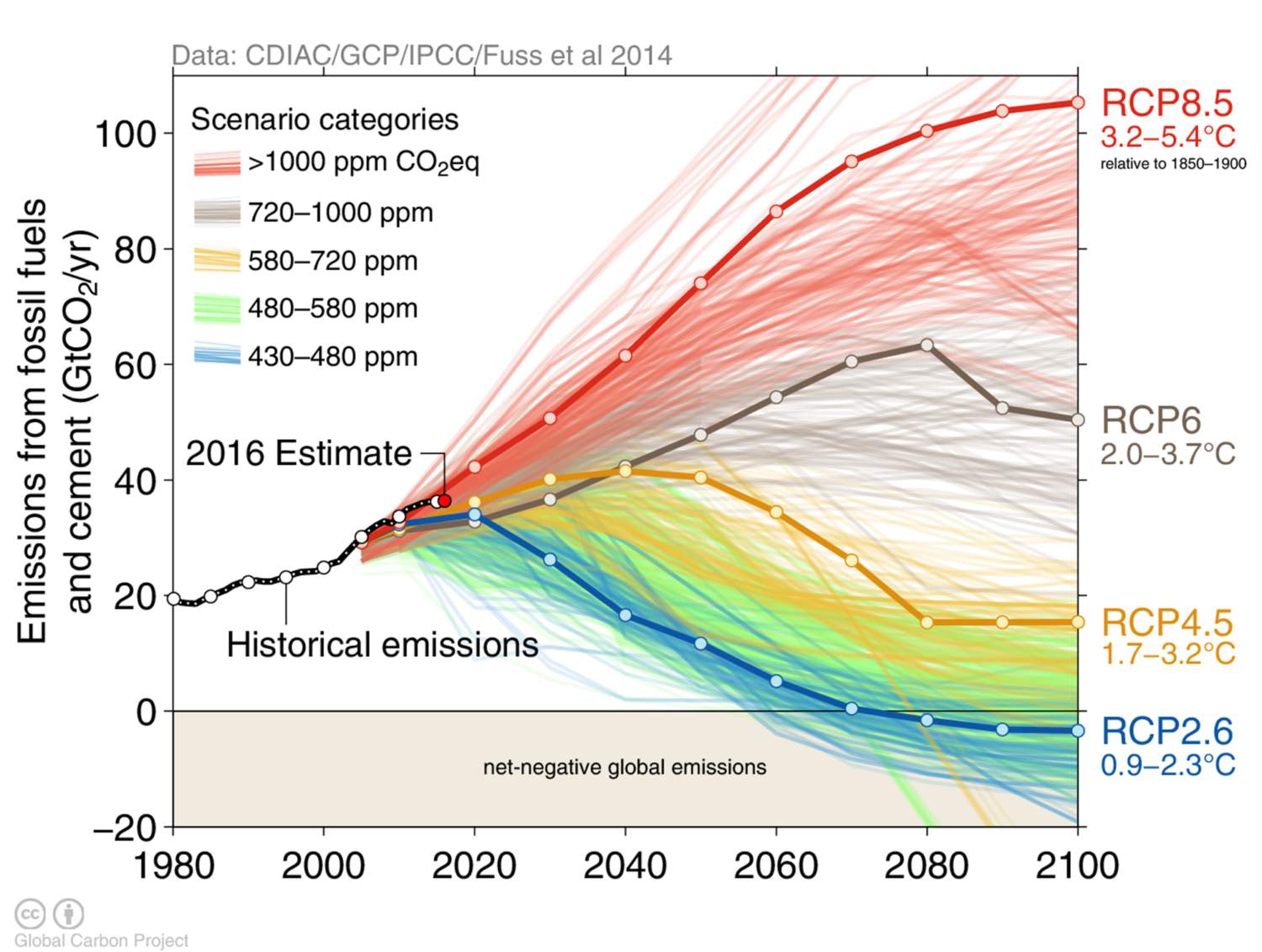 You’ll notice we’re tracking right below the worst-case scenario, and well above the “we’re into brian-damage country” – actually none of those scenarios look anything like good. When will lack of oxygen affect the development of fetal brains? There: that’ll give the anti-vaxxers something to really worry about.

Pretty Dead Things » « How Not To Do It: Iran Edition