The US has always been a racist apartheid state; it’s just been trying to claw its way from that abyss for a few decades and has been back-sliding pretty badly lately. The recent kerfuffle about the Trump Administration’s adding racially charged questions to the census is not even remotely new.

By a coincidence, I had been ignoring several letters from the government telling me I needed to fill out the census under penalty of vague threats, so I decided to actually do it. Except, I’d treat it as a social science survey and make sure I gave the most bullshitful answers possible. That turned out to be hard, because the questions were more bullshitful than my answers. See what I mean: 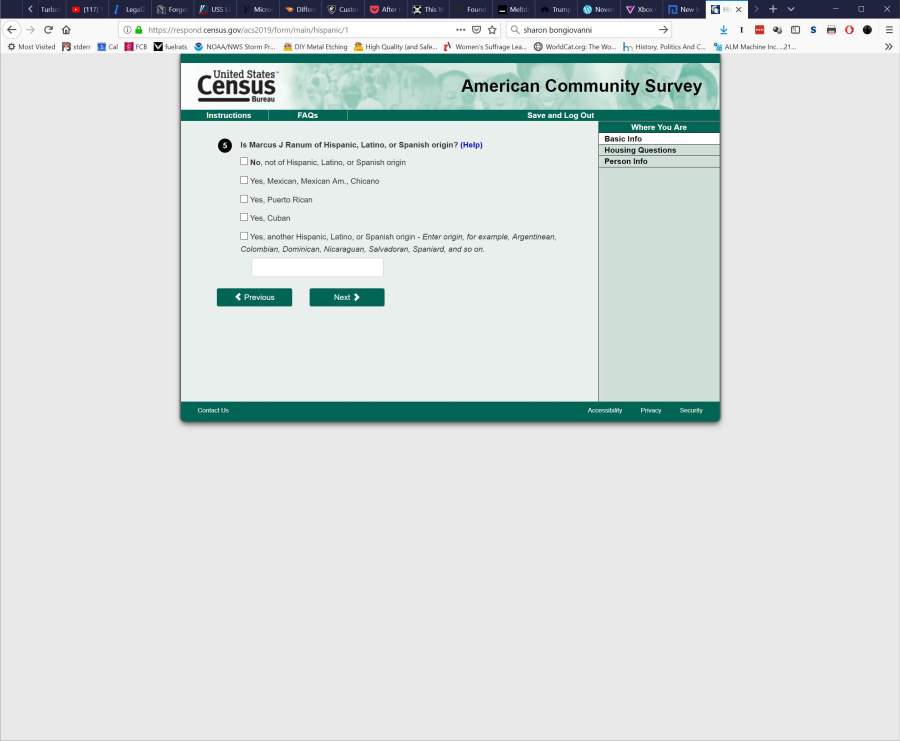 Of course, the people who are asking the question don’t know what “hispanic” is, either, they’re just looking for “average voting-bloc member” so they can decide if this part of Pennsylvania needs to be gerrymandered to make it more likely that someone white (whatever that is) gets elected.

That question was the first question out of the gate once it verified my identity. It’s kind of a dead giveaway what they’re interested in. 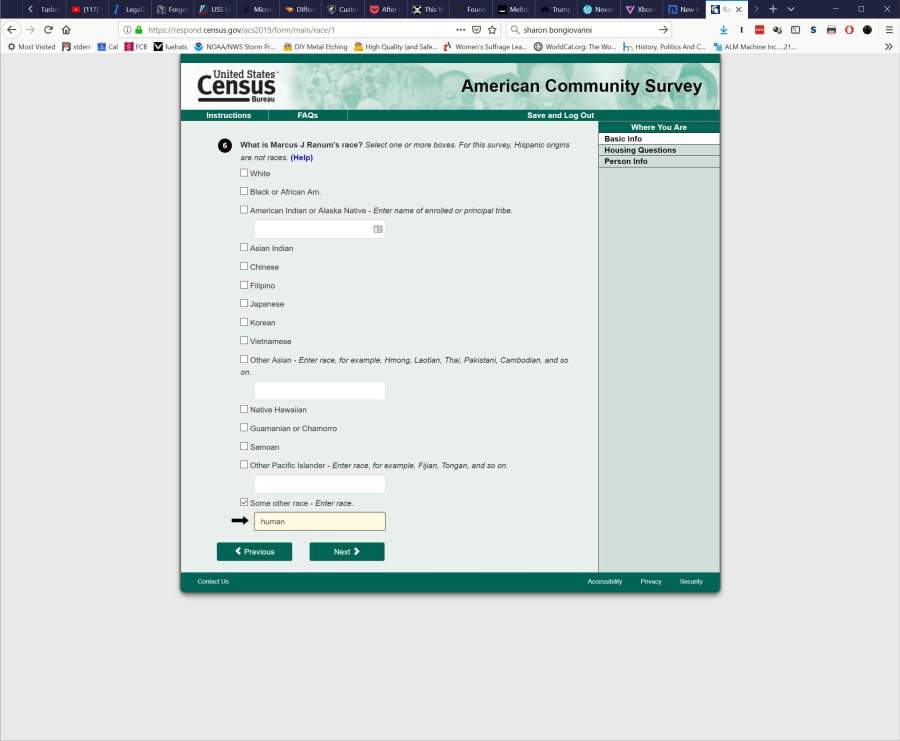 Of course, the census is not being used for racist purposes. That’s why the 4th question is: what’s your race?

Naturally, I put the only correct answer that can be given to that question, unless the person sitting at the keyboard is a dog or a cat.

Note the caveat at the top: since they already asked “are you hispanic?” they then say “Hispanic origins are not races.” Well, that’s true but only because races are entirely a fiction. If they were asking “what species are you?” then we could still have a resounding debate because it turns out that species is also kind of complicated. As a pale-skinned person whose ancestors were Irish and Norwegian, it turns out that I’m around 2% Neanderthal. Does that matter? Why isn’t that an option on the question? I’m more Neanderthal than I am ‘white’, you ignorant racist American shitheads. That’ll teach you to assume; it makes an “ass” out of “u” and “me” – I might not even be human; so let’s clarify that. 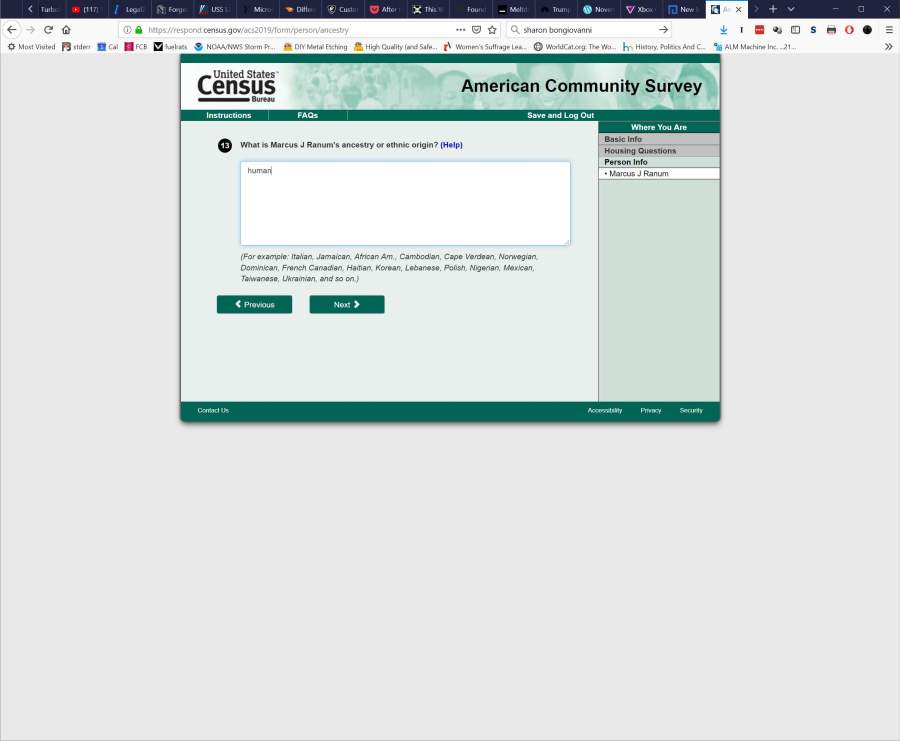 Not content to be overtly racist, the US Government then wants  to ask my “ancestry” or “ethnic origin.” What am I supposed to put there? “hispanic”?

It was sorely tempting to write a fairly lengthy response explaining that my ancestors were scandinavians that interbred with neanderthals way back and may have traded with the moors in the 13th century and who were invaded by the Hanseatics around the same time, so there might be some Goth in there but we don’t want to talk about that, do we? And on my Irish side, well, heck, there might be some Dane, or even some Roman (what US Government chucklefucks might render as “Italian” though the Roman military included people from all over the place so for all I know I could have some North African via Rome) since Ireland was invaded by England, way back, there could be some of that, too. Who knows? Personally, I don’t think I am very Norwegian because I loathe lefse and lutefisk and I think Irish cuisine is pretty horrible but I love pizza so that’s probably the Neanderthal ancestry and Roman/Italian coming to the fore, right?

Naturally, the racist wet-wipes that write these census questions probably think they are members of a single, simple “ethnicity” and they are probably confusing it with their skin color because they’re clearly ignorant (probably ‘white’ – white people have notoriously low IQ but are very violent and tend toward imperialism) What the hell is “ethnicity” anyway? If they think they are “white” there’s probably a good likelihood that pale-skinned Europeans have some Russian in them since WWII, or some Mongol in them since the 13th century when the mongols tried to turn around the decaying genetic legacy that degenerated into “white people.” Tried, and failed.

This is lefse: It’s like a potato-based naan bread without any flavoring and no ghee. 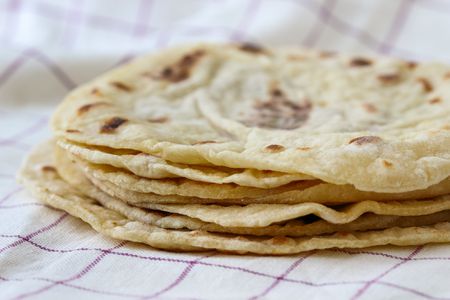 And this is lutefisk: it’s like if you took whitefish and soaked it in lye. It’s ‘white people kimchee’ except the only flavor it has is bad. 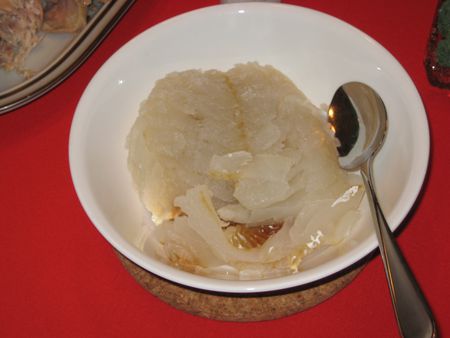 Joking aside, isn’t it remarkable how dumb racist chucklefucks often seem to mistake cuisine for ethnicity? Well, obviously, if you eat lutefisk and lefse you’ve got to be white.

What is The Pentagon’s CO2 Footprint? » « And Now: A Message From Your Algorithm