Where we left things at last update, the steel building company was sending out a welder to cut out the gussets and move them. This happened, and the assembly of the building resumed.

But only briefly. According to Ken’s crew, the guy showed up, his oxy/acetylene tank went empty, and he drove into town looking for a recharge, then came back and ground the gusset out with an angle grinder. Next, he welded it back in another place, painted it nicely to match the rest of the beams, and left.

The perceptive cynics among you (which is: all of you) probably noted my wording “welded it back in another place” not “welded it back in the right place”; that was deliberate. The company had sent him with another CAD-generated drawing that had the bolt positions and new gusset position, so he used that rather than, you know, measuring the actual beam that was actually sitting there 3 actual feet away. Then, he left. When Ken’s team hoisted the beam up on the crane, there was a gusset in a different, new, wrong place. According to Ken, it was actually wronger than the old place. They cut the gusset out with an angle grinder and assembled the beam in and bolted it down, then stick-welded the gusset somewhere where it fit. This building does not lack strength and if it falls on me because of a mis-positioned gusset, I really won’t care very long. 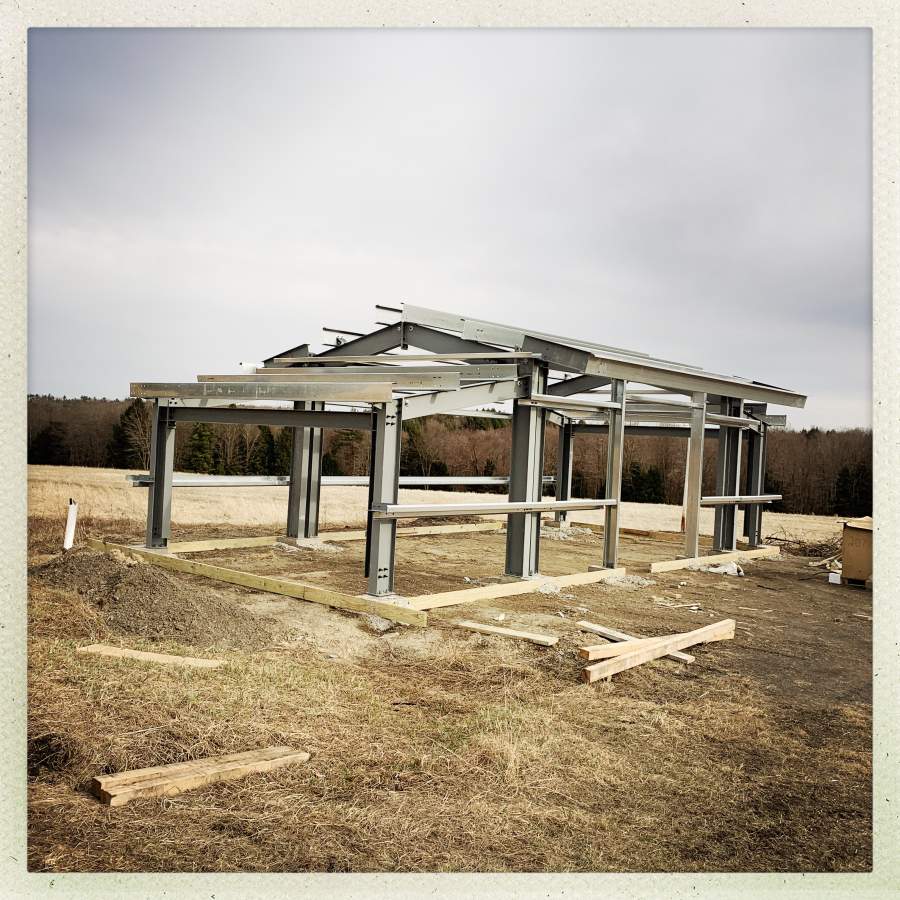 There’s also a nice header-beam across the side near the driveway (left hand edge of the building) that matches the beam at the field-side of the building. The field side of the building is the side that’s supposed to be open, where I am going to build a dojo-porch-oid thing and sliding windows. Ken said “that looks suspicious” and pulled up the plans and said, “yup” – sure enough, the building company had managed to read the email and diagram in which I said one side of the building was to be open, and made both sides open. I began to hypothesize that over-use of CAD may decay one’s faculties over time. Of course, I should have read every page of the diagrams and been able to understand them (I tried but they are not exactly marvels of clarity) – if I had, I would have noticed that the engineer’s diagrams bear no great resemblance to the pictures that I sent the engineer in the first place. I assume that’s a generic problem with engineers.* 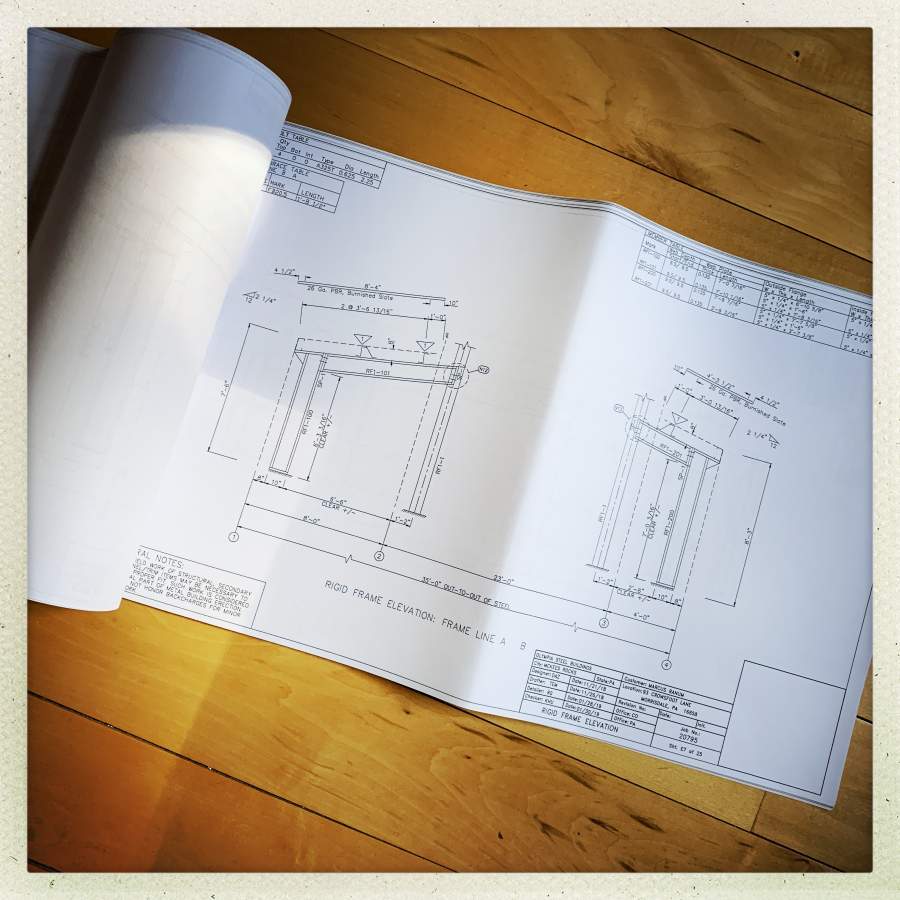 Engineering diagrams are pretty interesting. In a sense, they’re familiar: they’re a program for building a building. The main diagram has regions that are called out as details (e.g.: the anchor posts) and you can see how the anchor post bolts are to be arranged by reading the detailed specification for the bolts on the anchor posts. That’s on its own page. The main page does not have a little note like “see page 4” but if you read through everything you find a page that says “anchor post bolts, arrangement A), B), C)” and then you look at the main page and you see a little C near the anchor. So, my brain goes, “aha! That’s a function call where you call anchor_post(C) except this engineering diagram language does not have a linker so it has no tight binding between function name and its code.” Then I cursed engineers for a little while, because programmers figured out (at least, until languages like php came along) that strict typing and linking is a good idea. Software engineers may want to re-think calling themselves “engineers.”

Then, my day was ruined with a semi-coherent phone message that said something like “Hey I am the meter reader from the water company and I noticed that you’ve got 12,000 gallons more this month than last month. If you need more information you can call me [deleted].” Ohhhhhhhhhh noooooooooooooo. This is not the first time this has happened; the last time it was during the horrible arctic freeze a few years ago and it was one of the side-lines off the main water feed; the one feeding the stand-pipe in the barn. Naturally, I immediately thought “what if Ken’s guys managed to use the post-hole digger to get down and snap that PVC pipe!?” I texted Ken and he said there was no sign of any water and he didn’t know. So I made a bunch of phone calls including to the excavator who ran the line. 20 hours later, I still have no idea what to do – everyone appears to be busy at job sites. Meanwhile I know that somewhere I am paying to return pennsylvania spring ground-water back to the ground-water. There are times when having a house set back a half mile from the road is a big disadvantage. Another of those times is when you’re delivering a piece of machinery that weighs tons.

The situation is weird: I don’t have an idea what to do, so I’ve got to wait I suppose. Meanwhile, it’s just killing me to know that thousands of gallons of water are going somewhere. In the grand scheme of things it’s not like it’s gasoline – it won’t hurt anything and at most it’ll be a couple hundred dollars. What’s going to be expensive is the backhoe and finding the crack and digging it out. I bet it’ll be a mud-pit!

Meanwhile, I have the fabricators in Clearfield collecting me an assemblage of tube steels and rebar, and doing some welding (the stuff that needs to be nice) and I’m going to complete the reinforcement for the hammer pad next week, then Ken’s crew will dig the holes, pour the concrete, and we’re one step further down the path to something nice. It’ll actually be pretty close to done at that point except for figuring out how to close the extra open end of the building. Plans for that are to put some wood beams across the steel, so I can mount shelves onto them and we can screw some sheet metal down and be done with it. There are a few features of the reinforcement/floor that I’m particularly pleased with, but I’ll wait with bated breath to see if they get screwed up, first.

[Update: After some additional freakage I went and re-played the message the guy from the water company left me and was horrified to discover that he was not talking about my house he was talking about my shop – 10 miles from here on the other side of the mountain. Now, that’s a puzzler because my shop has only a single feed-line into the building that’s hooked to a single run of pex tube that goes to the toilet upstairs and the darkroom. I was just over there yesterday and if either of those was leaking, I’d know. 12,000 gallons of water would be – really obvious. So, this is one of those “good news, WTF news” situations – at least it’s not my home water-line that’s broken, but now I have no idea what’s going on at all. I’m already theorizing that maybe the toilet tank valve was damaged by freezing in the winter and it’s just been running water down the back of the toilet or something. It’s got to be the toilet because there’s nothing else on the line. When I set the plumbing up, I put ball valves everywhere so I can isolate everything, which I will immediately do. Then I will come home and have some wine and sort it out next week.]

*I begin to wonder if it’d be interesting to see who is better at building a building:

Judging by the atheoskeptical community, I will try to get a wino, if there’s a next time. Or I’ll just re-train as a wino.

Let Me Stake This Out » « Ask The Strategic Genius: The Hammerstein-Equord Algorithm