Congestion pricing seems like a good idea, doesn’t it?

My first encounter with congestion pricing was in Singapore in the late 1990s; [dot] when you went into certain areas of the city, all you saw was taxis. Personal cars are an expensive luxury anyway, so keeping the roads clear for taxis makes a sort of sense. Besides, the costs can be passed on to the customer, so it doesn’t really matter to the taxi operator. That’s what the driver of my taxi said, anyway. 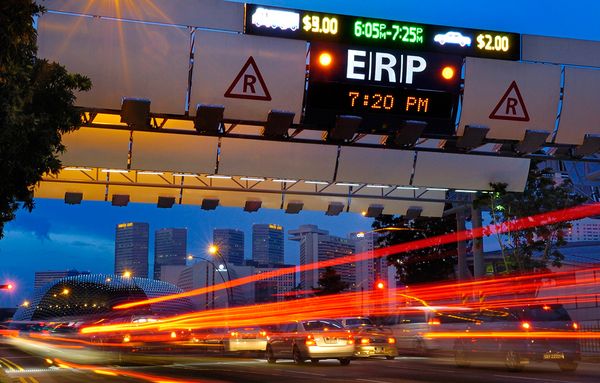 Flip the issue around and it looks like an Elon Musk-esque solution that operates for the convenience of the wealthy: if you make it more expensive to operate a jalopy on the road, then there will be fewer jalopies on the road. Anyone who can afford a Bentley or a Lamborghini can afford the additional tax. Let’s build an expensive hyperloop instead of affordable low-cost public transportation!

Back when I was working on Wall St. a lot in the 1990s, the streets down there were more or less permanently taken over by Lincoln town cars and the occasional limo or taxi. Anyone who’s got a town car service is not worried about the extra tax, and getting all the jalopies and Uber drivers out of the area will just make it less crowded, or at least it’ll be crowded with shiny black gas guzzlers.

Naturally, these systems encourage cheating. In order to collect the taxes and levy fines, Singapore built a powerful infrastructure of toll systems (in the picture, you can see the transponder readers on the overhead, just like Fastpass systems here in the US) – hundreds of thousands of dollars in order to catch the cheaters when, ironically, the worst of the cheaters are riding in the limos. It’s a good application, we are told, for license-plate scanning technology. Never mind that it hasn’t worked well in Pennsylvania [stderr] because the scanners can’t tell a Virginia stolen car’s plate from a Pennsylvanian’s plate. 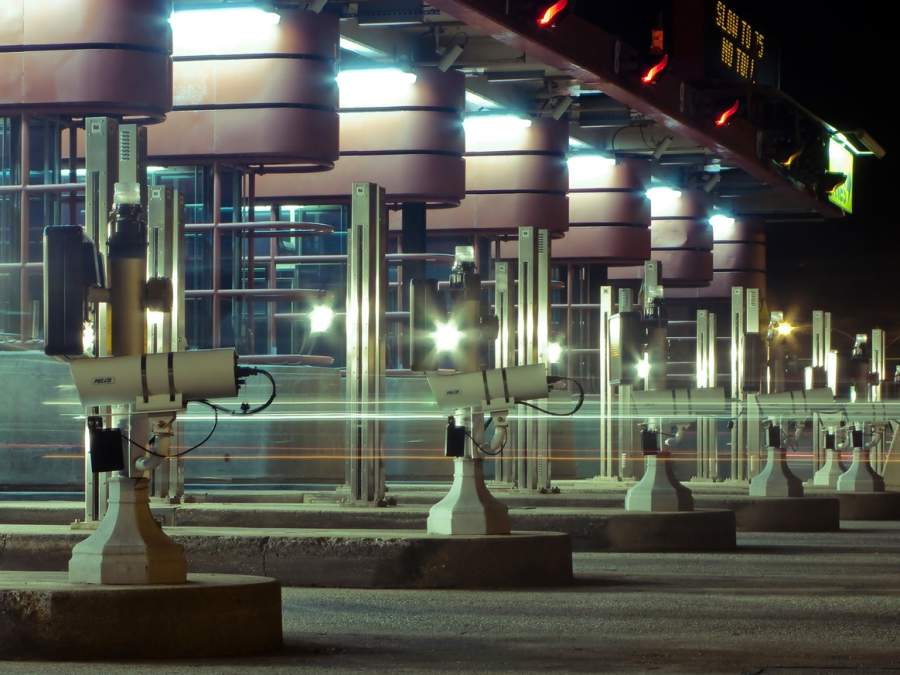 Techies seem to love this stuff, and seem to want to ignore the rather obvious fact that all those license plate scans are going into police databases, somewhere. Every advanced nation is eyeing license plate scanning as a way to solve … something. But ultimately all these systems will do is increase and ratify inequality. The WIRED piece describes, in drooling language, how the I-66 corridor – a permanent traffic jam waiting to happen – has been turned over to the rich, with a $40 toll lane for oligarchs:

There are plenty of reasons for outrage coming out of Washington, DC, these days, but this week the divided region found a common enemy. The express lanes on Interstate 66 near DC, previously reserved for vehicles carrying two or more people, opened up to solo travelers. Except those single-occupancy vehicles have to pay a toll, one that fluctuates according to demand. The world watched, aghast, as tolling prices hit $40 for folks headed into the capital on Tuesday morning.

The idea was sold as traffic reduction but if you have driven in Singapore, lately, you’ll have noticed that it only reduced inexpensive traffic. The same could be said for the I-66 “high occupancy vehicle” lane: in Washington a “high occupancy vehicle” has 2 people in it. Washingtonians have been known to buy lifelike fake passenger dolls so they could take advantage of the less congested lane; it’s typical of the American automotive mentality that people would rather buy a $1200 doll than have to save money by joining a carpool. Washington’s public transportation system, meanwhile, is decrepit and falling apart, and new line construction has been overshadowed by massive cost overruns that have as much to do with corruption as rising property values.

When I read the coverage about this topic, I’m always left scratching my head and wondering if I am the only one who sees it this way. People around the world have been so acculturated to the idea of taxes on luxuries that they never seem to realize that such taxes simply serve to increase inequality of outcome. Or, perhaps they’re hoping that Elon Musk’s hyperloop gets built and periodically turns a bunch of Los Angeles oligarchs into squashy red paste. It’s their fault for not being able to afford a helicopter like Musk’s or Bezos’. 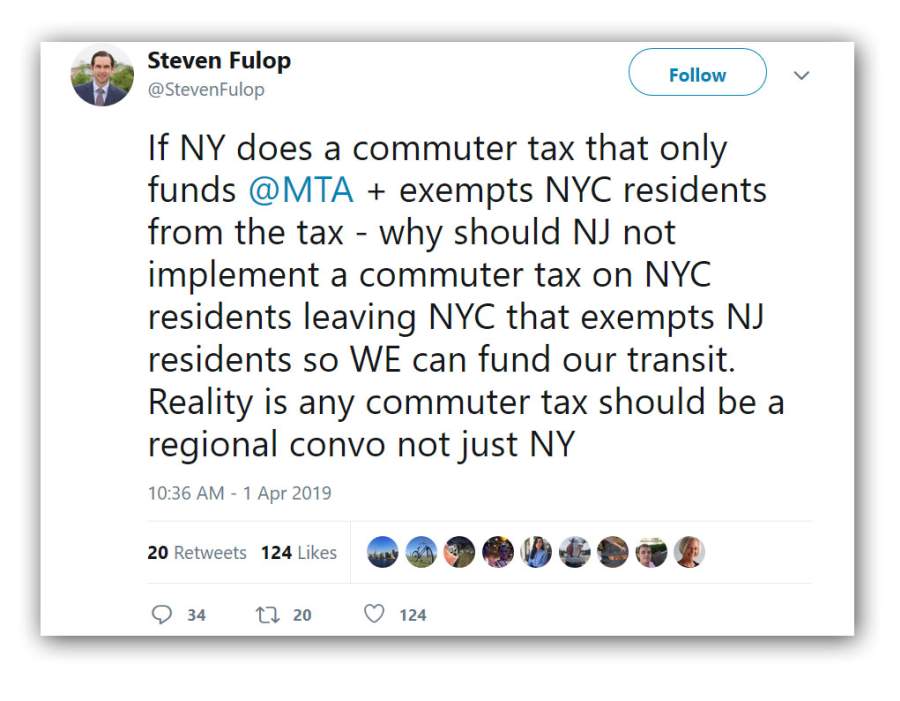 Few people also seem to look at the effects on non-load roads that suddenly become loaded roads. When the “Cross County Connector” outside of Washington went up, people started driving at high speeds through formerly quiet neighborhoods. That wouldn’t have mattered if they had been poor people’s neighborhoods but some of them were Potomac, Maryland where people like Michael Moore, and assorted diplomats live. The last time I drove in Potomac it was late at night and my car’s tank was on “empty” and I couldn’t find a gas station because the local residents have turned the streets into a warren of speed bumps, banned convenience stores and gas stations, and made the area inhospitable for travelers who hop off the freeway looking for road services. The next step is gated communities and private security guards (or “off duty police” cashing in on their badges). Not too surprisingly, the neighbors of these people “get it” [nj]

The last time I took the NJ Trans train into New York, from Netcong, the train was dilapidated, late, and smelled like pee. Every car smelled like pee. Since then I take a commercial bus from Allentown. Buses really jam the New York streets around the port authority building, but it’s not Wall St. and it’s not a rich neighborhood so … the overwhelming sentiment in the US remains “screw people who aren’t rich”, which is surpassingly odd since most Americans aren’t rich.

In Guangzhou, the Chinese are experimenting with the same thing except they’re more overt about it. Restrict private vehicle ownership by making it more expensive. [nyt] Does anyone want to bet that idea was thought up by an oligarch or aspirant to the oligarchy?

Back in 2013 I was an invited speaker at a security conference in Qatar, funded by some royal heir. It was lavish: first class seats on Emirates Air, a bentley picked me up at the foot of the jetway and drove me in through customs (I stopped and sat in padded comfort while the driver ran into the customs building with my passport and asserted that the person in his car matched the picture on the passport) Driving in quiet darkness to the Ritz Carlton in Doha, I asked my minder, who was along for the ride to make sure I checked in smoothly, “where is all the traffic?” and they informed me that there is a private VIP road to the airport, for all the bentleys and lamborghinis. Then I stupidly said (forgetting that I was in a monarchy) “Thank you for giving me the royal treatment.” They looked at me and said deadpan, “the royals have their own airports.” The interior of the bentley smelled like pears’ soap and leather.

The reality of commuter traffic is that every city needs nice, efficient, clean, safe public transportation. If it’s absolutely necessary to throw a bone to the wealthy, have first class subway cars, like the Paris Metro used to. Maybe even have a VIP train every so often, with VIP lounge chairs, a DJ and Cristal and cocaine at the bar, for all I care. Bezos and Musk’ll take their helicopters, which, I wish reeked of pee.

I have pictures I shot of the suite at the Ritz in Doha; it was absurd: a dining room for 11, a walk-in closet the size of my bedroom and a bedroom the size of the first floor of my house. I wish they had just given me the money for the tickets and hotel room and let me fly tourist class and stay at the Hyatt and pocket the $20,000 or so difference.