Saturday, we picked up our rental car and headed down the Pacific Coast Highway toward Monterey. It was pretty foggy; for her first week in California Anna got no day without constant drizzle.

The fog was a perfect 18% gray, and I noticed some unsettling things: there were lots of “floaters” in my field of vision, and they were different from the usual ones. These were sharply defined black points with white haloes. But that wasn’t what bothered me: it was the large “jelly fish” thing in the lower right of my field of vision. I switched eyes and verified that it was unique to one eye (i.e.: it wasn’t something in my brain) then observed that it tracked with my eye: something was wrong with my eye. By now some of you already know where this story goes.

Back in 2002 or so, one guy I knew in the security industry (he has since died) had a retina completely detach, rather suddenly. He said he saw “floaters” and then a black curtain drew across his eye and he never saw with that eye, again. I was trying to play the situation reasonably cool, which means that I was not screeching like a scared chimpanzee and flinging poo around like a congressman. When we got to the hotel in Monterrey, I checked around a bit and found a local hospital with an ER that had an opthamologist (but it was Saturday late in the afternoon) and a local opthamologist who listed an emergency contact number. Since I had it in my mind that this was an emergency, I left a message on that number and started to sort out my plans for getting to the ER. But, lo! A nice-sounding opthamologist called me back on my phone and said “this is nothing to mess with” and suggested I could meet him at his office in 15 minutes. 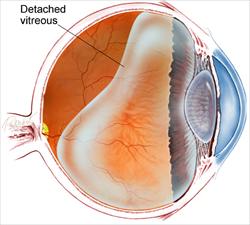 15 minutes after that, I was having bright lights shining in my dilating pupils, and all sorts of close examination from various angles with magnifying lenses. My assumption was that I was going to probably lose an eye, at worst, or have some kind of surgery, at best. But, no: it turns out (as he explained to me, very clearly) the gooey stuff in our eyes sometimes dries out, and if our eyes are particularly egg-shaped – as those of us with nearsightedness’ are – it detaches from the back of the retina and doesn’t really hurt anything but it’s a problem to keep tabs on. Sometimes it can pull the whole retina away with it and then it’s a bad, bad day.

I’ve been walking around all week with a “jellyfish” in the lower right of my field of vision and it may be a new part of my reality – it sounds to me like one of those “If it doesn’t get worse it’ll probably get better but maybe not much” kind of situations.

It’s good to know the symptoms of these sorts of things, and to understand what is an emergency and what is not. I don’t recall at any point of my life being taught, “here is when you walk, and here is when you run.” I suppose the list of things that can go wrong is too big to pre-load us with sensible responses, until we’re at the point where they become obvious.

I’m 57 and my joints are falling apart, my eyes are not so hot, my brain is definitely not what it used to be, etc. I know that Making Marcus Great Again is not an option; I suppose I should just be glad that the wheels haven’t come off with a bang yet.

A big tip ‘of the eyeball to Dr Leland Rosenblum, MD., who dropped what he was doing (he said something about “it being a boring meeting, anyway…”) and came to poke around at my head and diagnose a scary situation. I hope that doctors like Dr Rosenblum periodically remember how much comfort they can bring when the situation is scary; their calm and professionalism is the best of what modern medicine offers.

Someone needs to write a book like: “Now that you’re at the age where you are falling apart…” – it should have a list of things you absolutely must know, and then a big indexed load of “things that are emergencies” and “things that are very expensive” and “things that will probably be OK if you don’t pick at them.” I guess medicine is too much of a moving target (that’s a good thing: I remember when they taught us a version of CPR that didn’t work very well) I’m just super glad that people like Dr Rosenblum are there for us when we need them. He’s way better than a whole fleet of F-35s.