When the media report on police crimes, they still use credulous language. What does that say?

There’s a lot to unpack in this story [nbc]:

“The no-knock warrants are going to go away like leaded gasoline in this city,” Police Chief Art Acevedo said after a raid in which two suspects were killed and several officers injured.

Good news, and it’s about time. Note the way the raid is described: “two suspects” killed and “several officers” injured. But wait:

Last week, it was revealed that an affidavit to justify the warrant appears to contain “some material untruths or lies” and police Chief Art Acevedo said an officer will likely be criminally charged in the case.

So the warrant was based on an affidavit that was untrue. In other words, the warrant was obtained falsely. That means that the two “suspects” that were killed were not “suspects” at all – they were “citizens” or “victims.” The language of police authoritarianism makes you a “suspect” if you have any kind of interaction with a cop, and that’s how the news often reports it, too. 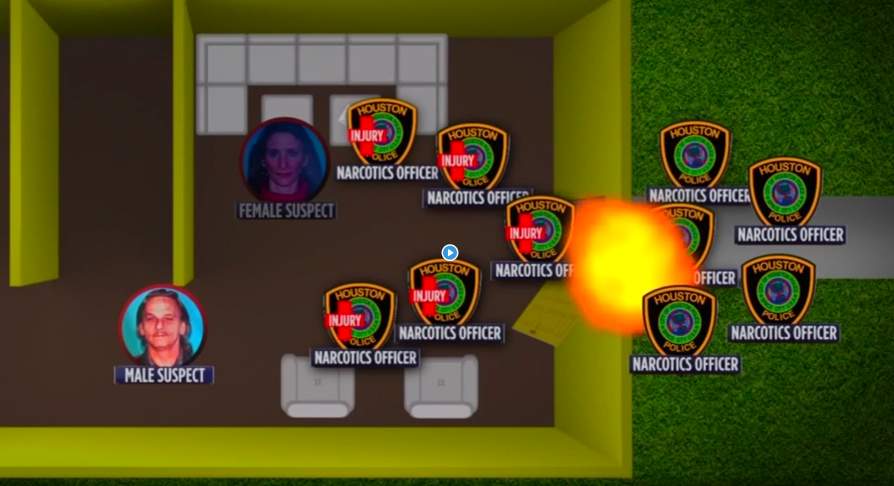 “The family was murdered,” Eileen De Los Santos, a longtime friend of those killed in the raid, said during the meeting, according to the station. “I would like for someone to use the word ‘murdered,’ because they were murdered.”

That is correct; it was murder under color of law. I find it odd that the news reports “suspects” were killed when the “suspects” would be the cops.

The Harris County District Attorney’s Office has said that it is investigating every aspect of the incident. District Attorney Kim Ogg said at Monday’s meeting, “What charge is going to be presented will be based on the evidence and the evidence is still being collected,” according to KPRC.

Last week the local station obtained police documents that say the warrant was justified by a claim that a confidential informant purchased heroin at the home that was raided and that a weapon was observed there. But investigators have been unable to find that informant.

Narcotics Officer Gerald Goines provided the names of two confidential informants, but one said they did not work with Goines on that case, and the other said they purchased heroin from a different home at Goines’ direction five miles away, according to the documents.

Investigators interviewed everyone on a list of informants that had worked for Officer Goines and all denied making a buy for the officer from the Harding Street home or ever buying drugs from Tuttle or Nicholas, according to the documents. After the raid, police said they found several firearms at the home, along with marijuana and cocaine, but no heroin.

Goines, who prepared the search warrant, has since been suspended, according to Acevedo.

Goines is the “suspect.” He was also shot and wounded during the raid.

The whole notion of “no knock warrants” is, to me, a textbook example of an “unreasonable search” – in fact it’s exactly the kind of militarized searches that the colonists were reacting to, that made the 4th Amendment part of the constitutional rights reserved for the citizens. Law enforcement has consistently pressed against those rights, twisting and interpreting them in order to moot them. It’s disturbing when law enforcement isn’t happy even with the reduced citizens’ rights and its members lie to get warrants.

Here is a bit more about how the story is reported: [abc]

Police recovered two shotguns and three rifles from the residence and seized marijuana and a white powder they believe to be either cocaine or the powerful synthetic opioid fentanyl, Acevedo said at the time. But officers did not seize any black tar heroin, he said.

One of the suspects, Tuttle, charged from the back of the house firing a .357-caliber Magnum revolver at the officer, hitting him in the shoulder, Acevedo said.

The police recovered two shotguns and three rifles and not a .357-caliber magnum revolver? How odd. One of those shotguns was probably a typographical error.

Also, the reporting baldly transmits Acevedo’s official line, which makes it sound like he’s the good guy who has decided that “no knock” warrants are a bad thing and he’s discontinuing them. Elsewhere, it is mentioned that Internal Affairs is investigating the use of “no knock” warrants and officer Goines’ actions:

But an affidavit filed in Harris County District Court on Thursday by Houston internal affairs detectives investigating the raid indicates the confidential informant Goines said conducted the drug buys on his instruction claims he never even went to the house.

It sounds like two people and a dog died, and others were wounded, over a small amount of weed. And, now that they have screwed up massively and are being investigated, the cops have decided to lie low for a while, until Internal Affairs goes away.

There is a report presented by the police chief here [po] and it seems to me that the presentation is a bit dishonest. Acevedo tells the literal truth “Officers were serving a warrant” but lies by omission, not mention it was a “no knock” warrant. It is relevant. The description of the incident provided by the police makes it sound as though they were just there, you know, serving a warrant, and came under fire – not smashing the door, charging into the room, shooting a dog, and then taking fire from the people in the building. It also sounds like a class-1 clusterfuck (with oak leaves clusters) with the cops bunched up in the door swapping bullets with the about-to-be-deceased.

“He said Goines, who has been with the department for 34 years and was previously shot twice in the line of duty, has been relieved of his duties and will likely face serious criminal charges.” – we’re supposed to believe that Goines was the only one who was involved in falsifying the information in warrants.