Pacific Gas and Electric’s (PG&E) lawyers are apparently convinced that some of the wildfires may be a result of PG&E poorly maintaining lines, therefore PG&E might be provably culpable, therefore…

… Declare bankruptcy! Now, you can’t get at any of our money. [guard]

Faced with potentially ruinous lawsuits over California’s recent wildfires, Pacific Gas & Electric Corp filed for bankruptcy protection Tuesday, in a move that could lead to higher bills for customers of the nation’s biggest utility and reduce the size of any payouts to fire victims.

The Chapter 11 filing allows PG&E to continue operating while it puts its books in order. But it was seen as a possible glimpse of the financial toll that could lie ahead because of global warming, which scientists say is leading to fiercer, more destructive blazes and longer fire seasons.

PG&E cited hundreds of lawsuits from victims of fires in 2017 and 2018 and tens of billions of dollars in potential liabilities when it announced earlier this month that it planned to file for bankruptcy.

The “corporations are people, when it comes to free speech” doctrine sort of looks sketchy when a corporation decides to shoot itself in the head rather than face the music. And, also – coincidentally – the corporation takes the hit, not the independent human beings who ran the corporation and made the decisions that the mindless and heartless corporation executed on.

$71 billion in assets, and billions of dollars in liabilities? Sounds to me like maybe they should have taken a bit less profit, hired a few more workers, and maintained their infrastructure better. It’s absurd to declare bankruptcy with $71 billion in assets; I’m sure they could get a low-interest loan from some Russian oligarch… No, ctrl-Z that thought.

When I read that story I immediately thought, “I’m sure those executives all leapt up to put on their golden parachutes, hooked up, and clawed their way to be the first in line at the door.” I don’t see any documentation about that, but the executives of PG&E don’t seem to be doing too badly: [sal] 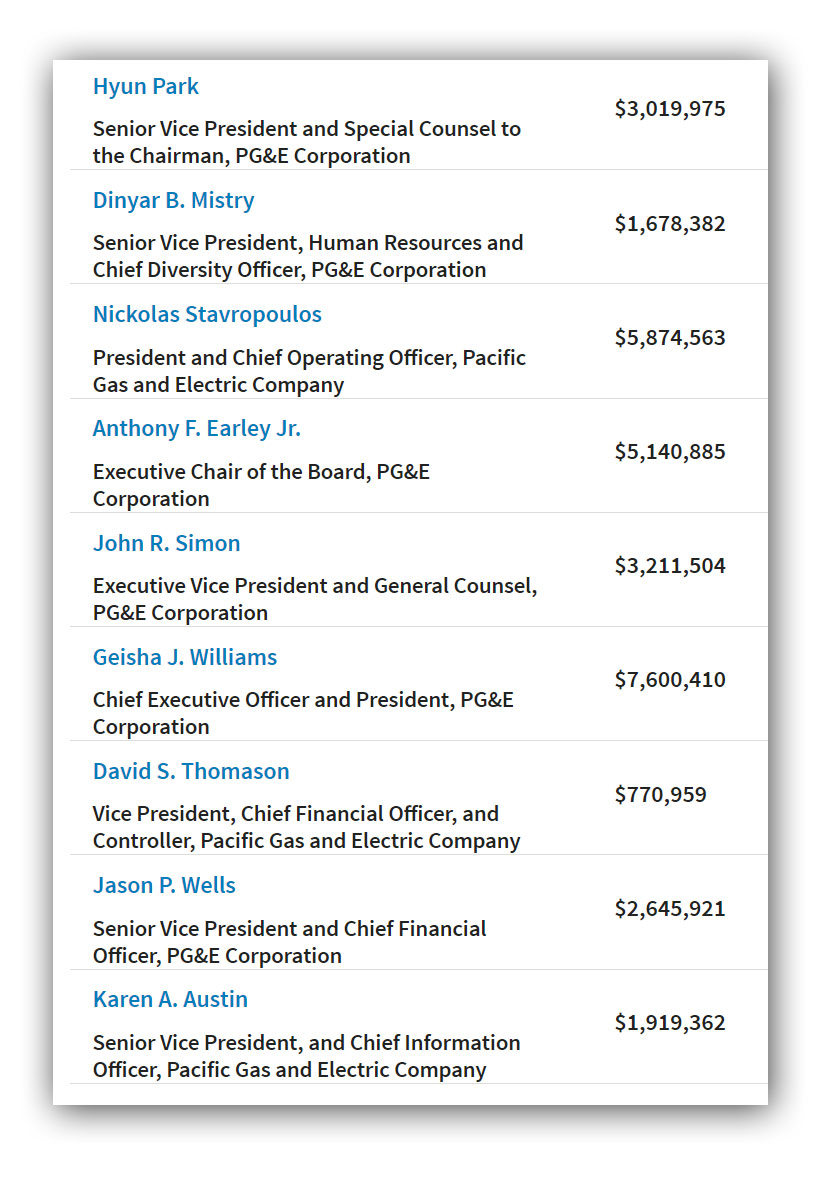 Being the captain of a sinking ship is great. Not only do you get to sink it, you get all kinds of cool gold braid and, when you swim ashore, shake yourself off, and go to the captains’ roost, your golf buddies will help you get another job as a captain. Meanwhile, the people whose houses burned can fight over the scraps that the lawyers don’t want.

Hahaha, I’m kidding. There are no scraps the lawyers don’t want.

We Need Better Liars in Office » « Caring About The Workers