It’s necessary to have people out there to help collect information about what’s happening in the world; ideally they then report on it reasonably honestly.

It seems to me to have been adequately established that the US pullout from Syria makes Turkey happy because then they can resume their decades-long attempt to wipe out the Kurds. 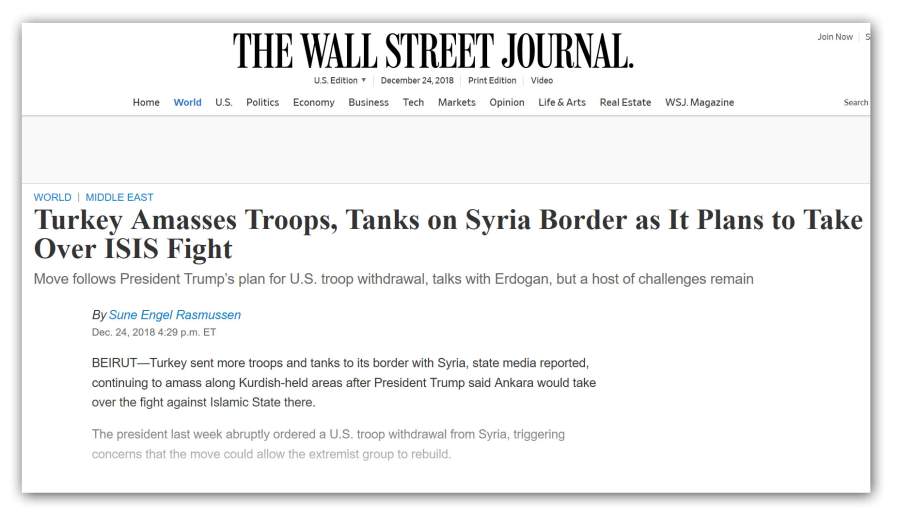 Does anyone believe that? Did the Wall Street Journal just go print some press release from the Turkish Department of SomethingSomething?

I find myself in the awkward position of agreeing with the stereotypical Trump supporter, who claims that the “mainstream media” is full of fake news. If that’s not fake news, I don’t know what is. The rest of the Imperial American War Party are not pretending that the conflict in Syria is going to result in anything more than slaughter, land and resource grabs – why is The Wall Street Journal pretending?

Oh, and don’t forget: the US is deeply concerned about sovereignty which is why they wagged their finger most seriously at Russia when they obliterated the US’ proto-puppet state in Ukraine. Since Turkey is about to flat-out invade Syria, we will surely lodge a most serious protest! Perhaps we will even complain to the UN!

How stupid do they think everyone is? Oh, wait. I think I just figured it out. We have always been allied with EastAsia.

The Kurds are going to lose badly; they have made the mistake (thanks to the US) of collecting their forces to where they can be destroyed. I hope they make the Turks suffer for what they are going to do, but it’s probably going to be pretty one-sided.

I just realized there’s a flaw in Orwell’s 1984. Why would INGSOC bother propagandizing its people, at all? The society is set up so that there’s nearly zero chance of a successful revolution and the machinery of state power is completely overwhelming. There’s no need to pretend. If “the object of power is power” is all, then power wouldn’t waste its time trying to appear palatable to anyone; that’s not power. Absolute power absolutely does not give a shit.

The World Slides Further Into Nihilism » « The “Be More Cynical” Quiz!