It seems silly to worry about polar bears and whales and whatnot, when humans appear to be lining up a Permian Extinction-style wipeout for everyone. But it seems as it humans are rushing toward the freight train screaming “come at me, bro!”

TOKYO – Japan announced Wednesday that it is leaving the International Whaling Commission to resume commercial hunts for the animals for the first time in 30 years, but said it would no longer go to the Antarctic for its much-criticized annual killings.

Japan switched to what it calls research whaling after the IWC imposed a moratorium on commercial whaling in the 1980s, and now says stocks have recovered enough to resume commercial hunts. 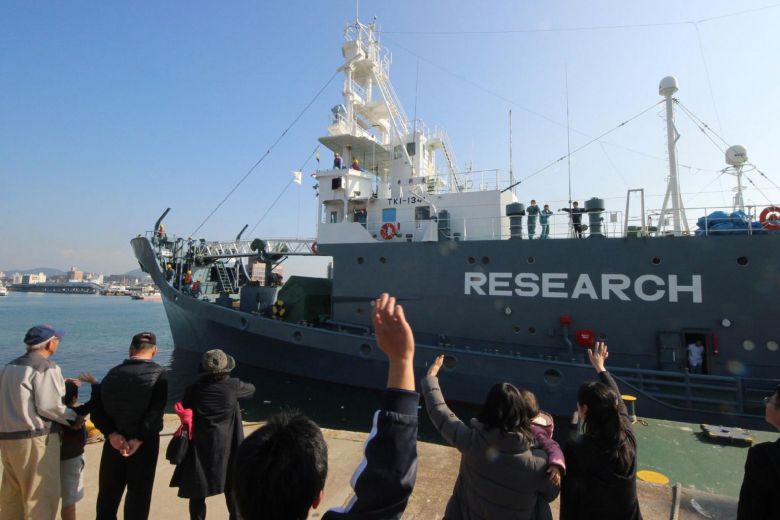 Of course it’s research! It even says “research” on the side. In Japanese.

As I mentioned before, [stderr] this is not exactly “nihilism” – nihilism does not argue that the powerful should go out of their way to prey on the weak. This is more like: someone told Japan’s elites that eating whale was bad, so now they must re-establish their elite credentials by demonstrating that they can overcome any attempt to control them. Basically, “for every whale you save, I’m going to eat two!” Perhaps the word is “Thanotic”? Are our politics in love with death?

“Research whaling” – it’s not research if you eat it. That’s lunch.

I am reminded of a bad joke which ends with the punch-line “so much for your fucking canoe.” That appears to be some humans’ reaction to the radical idea that a) resources are not infinite b) by-products of industrial processes do not magically vanish off the planet when we are done with them c) we are not the only people whose lives matter. What’s next, the LAPD announcing that they are so annoyed by Black Lives Matter that they have decided to raise the ‘bag limit’?

In the meantime, I wonder if the Houthis would spare one of their wire-guided anti-ship missiles? That big slab-sided upper works is a great target. “Oh, we just decided unilaterally to resume bombing Japanese ships like we used to.” Oh, oops, did I say that out loud? Gazing into the abyss and all that.

Smells Like Rotting Justice » « Why Do We Trust The News?