What if your “good guys with guns” turn out to be the Keystone Kops?

In news that should not surprise anyone but Americans, “sky marshals” have developed a glorious history of misbehavior and incompetence. The short form would be: “you can put cops on a plane, but they’re still cops.” I suppose we’re to be grateful that there haven’t been any incidents in which they have shot another passenger in the back and claimed they were “scary.”

CNN has a collection of some of the known incidents. I tend to believe that the “iceberg rule” probably applies: things are actually much worse; these are the screw-ups that were caught on camera.

The cases ranged from seemingly mundane issues, such as improper storage of weapons, to situations in which air marshals allegedly jeopardized public safety.

In 19 of the cases, air marshals allegedly fired their weapons accidentally. For example, the documents state that in 2017 an agent based in Charlotte, North Carolina, “unintentionally discharged a personally owned firearm resulting in a gunshot wound to his right foot.”

It’s the specificity of “right foot” that makes me wonder if they track left foot incidents separately: “The good news is that our left foot shooting incident-rate has dropped 50%!”

A 2013 case described an air marshal mistakenly firing his weapon inside a hotel room and damaging a television in an adjoining room.

More than 70 of the incidents relate to lost, misplaced or stolen weapons. At least three of those cases involved air marshals forgetting their firearms in airplane bathrooms. Two others involved weapons misplaced in airports.

It does not take a strategic genius to figure out that the worst way to create a “weapons free zone” is to bring weapons into it in order to enforce it. I’m a bit more baffled by the misplaced weapons: carrying a weapon safely is, literally, the one job that air marshals are supposed to be doing. Fortunately, that’s the one job – because “bad guys” don’t seem to appear on planes very often. They are probably scared of air marshals. 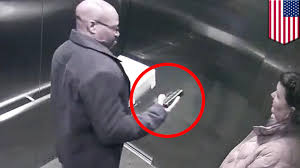 Jackass Cop Daryll Jouette about to fire his service pistol in an elevator. [Edit: note the way his hand covers the slide. Not only is he about to make a stupid move, it’s going to really hurt his hand.]

On one occasion, an air marshal allegedly left his gun inside a Bed Bath & Beyond store in Totowa, New Jersey. In another, an investigation was launched after police found a “range bag” containing a gun box and ammunition in a school park.

I did not realize that we had Bed Bath and Beyond marshals and school park marshals. Joking aside, this illustrates a problem with gun-carrying, namely that it is at risk the entire time it is deployed. No “bad guy” in their right or wrong mind is going to try to take a gun from an aware air marshal.

TSA has investigated 35 incidents in which air marshals were alleged to have unintentionally or inappropriately discharged or brandished weapons between 2007 and 2017. Of those, 27 incidents were substantiated and resulted in disciplinary action, while eight were cleared with no action taken.

“Cleared with no action taken” is scary to me, because I always see that as a red-flag for abuse. In my mind it translates automatically to: “we had some cases that we decided not to pursue because we like that guy.” That sort of internal process of self-regulation is designed for abuse – ask the Roman Catholic Church.

This stuff is so depressingly predictable it makes me want to just dig a hole and crawl into it and wait for everything to be over with. I feel as though the signal accomplishment of the Trump era is “oh, you really want something to complain about?!” demonstrating that demanding better is pointless because there is no bottom to how bad things can get.