Trump’s not just an abusive jerk, he’s a manipulative asshole too. And it seems he takes every change that he gets to display his power against those that are weaker than him. 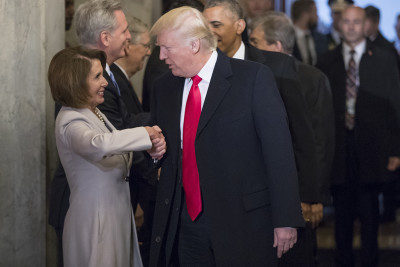 Look at the picture for a bit. First, he’s trying to lift Pelosi’s arm up past her shoulder. If she’s got any rotator cuff damage (as most of us over 50 years old do) that could be quite uncomfortable. Also, it’s as if he’s trying to rip the stitches at the armpit of Pelosi’s dress. Then he’s pronated her palm and is pressuring her wrist out, which is effectively pulling her into him. Look at her face. It’s the schoolyard bully scene.

I’m not a fan of Pelosi but I wish she’d shouted “let go of my hand” and kneed him in the groin if he didn’t, immediately.

Trump turns shaking his hand – normally a respectful exchange of greetings with a peer – into an act of submission. Do not shake hands with the president, he’s not worth it. Nobody should want a photo-op like this.