I’m mad at myself for not thinking some things through that I should have seen coming a mile away.

Grinding metal creates lots of dust – sparks fly everywhere, at all angles, and it’s just unavoidable. Or, is it? Here’s the problem: it needs to be avoided. When I was a kid I didn’t take it particularly seriously but lately I’ve had opportunity to pause and reflect about what kind of stuff I may be breathing in. I mentioned Dan U., who died at 40 of mesothelioma because he was young, and immortal, and didn’t wear a breath mask. Sensei Bell wears a breath mask, now, but he’s got respiration problems from years of breathing in metal dust and forge gases. [stderr]

I’m 55, and I could probably do like Ansel Adams and say “something else will kill me first” but from what I’ve seen of mesothelioma and COPD I don’t think either of those is a particularly great death. I’m holding out for a massive stroke while I’m asleep after watching a great movie, or something like that. I probably won’t get that, but I damn sure don’t want the shortness of breath or cancer. 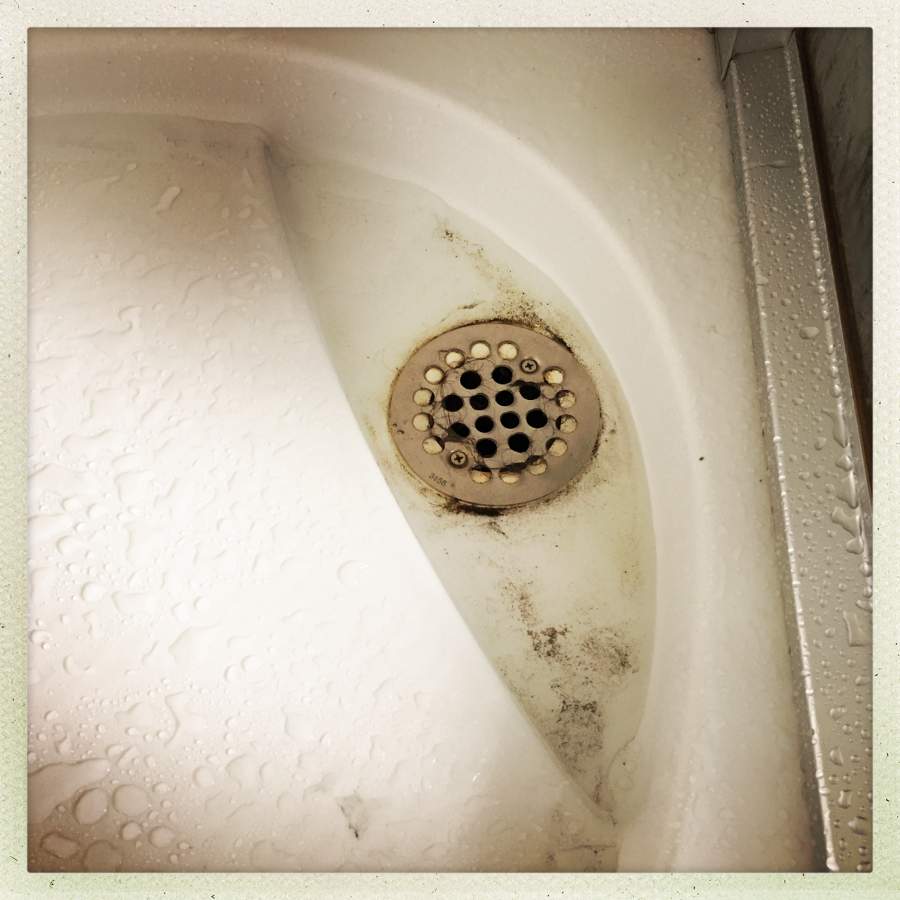 The problem, in a nutshell

Even if I am wearing a mask, I get home and my hair is full of dust. That’s just a bit of what rinsed off me one time – sometimes I rust after I shower.

I’ve been wearing a small silicone half-mask, but dang that thing is awkward with my face-shield and earmuffs, too. I may as well be wearing a space-helmet. So, I looked for one of those. Alec Steele wears a 3M Powered Air Purifying Respirator (PAPR) which is, pretty much, a space helmet – it’s got a belt-pack that provides filtered air at a steady rate, so you don’t have to suck against the resistance of a filter pack. That extra bit of effort translates into whooping gasps for air when you’re standing in front of a running forge. None of this is good.

Searching around on ebay, I discovered that the head units of the PAPR are relatively cheap – what’s expensive is the batteries. And for some reason, 3M is cagy about the power formula of the batteries. It took me a while to find out that it’s 4.8V DC, 4a – which means that a $2 DC stepdown transformer (12V DC to 5V DC) will allow a USB portable recharger pack ($20 on ebay) to do the same job. I ordered parts and am waiting for everything to arrive and I’ll see if I can make the mask’s air filter pump work without shorting anything out.

Then, there was the other day – I was prepping a stack of victorian wrought iron and something was nagging at the back of my mind. It was the paint. The lovely orange-red paint on the wrought iron. I grew up in Baltimore; I know what lead paint looks like. I had been dancing around in a fountain of lead dust of my own making. Other than the fact that it’s plenty of fun, none of this is good.

A lot of knife-makers like Alec and Haley DeRosiers have “grinding rooms” – a room set up for where you can fire sparks all over the place, and there’s nothing flammable – where the working surfaces are designed for being swept down and swept up. Great idea. It’s much better than my arrangement, which consists of sweeping up tons of dust about every other week.

Right about then was when I sat down, pulled on my engineer’s boots, and started kicking my own ass. There’s something I didn’t mention to you all: attached to the 1st grade classroom (where my shop is) is a door to the Principal’s Office. The Principal’s office has a big old steel-case desk that weighs about 200 pounds, an old IBM selectric typewriter, some rotary dial phones, and other than that… It’s a perfect grinding-room. It’s about 8 feet by 8 feet and has a little closet for storing abrasives, it’s perfect. What’s not perfect is the rest of my shop. If I move the belt sander and angle grinders to the grinding room (which is about right) then my main workbench could be half the size it is, and could be a clean assembly bench not a powder-covered EPA superfund zone. But I built that workbench so thoroughly that the idea of taking it apart feels like satan laughing at me: “you built a nearly indestructible workbench, mortal, and now you have to disassemble it, saw it in half, and re-assemble it.” That means sawing the frame tubes on the bandsaw, but first that means disassembling them. Etc. It’s going to take my shop down for a week, at least, and it’s all my fault for not thinking a little bit harder before I got started building the shop.

In the end, it’s all good news. I’ll put an air filtration system in the upper part of the grinding room, and I am going to build an external feed air pressure filter system. That’s short for “knocking a hole in the wall and running a shop-vacuum hose down from an arm on the ceiling, then setting up the hose on the out-flow of a mini shop-vac with a HEPA filter on a speed control.” It ought to be like a PAPR system except it’ll be bringing in cooler air from another room. We’ll see how it works in practice. Total cost of the components was $30 on ebay and I have them all in my “to do” box in the hall. Did I say “to do box”? It’s a great big phalanx of boxes.

First, I need to build Grinding Bench 2.0, and Grinding Power Cord Management and a shelf for the collection of angle grinders and a hanging rack for the belts and disks and whatnot. Somehow I will hoist a great big Jet air filtration system up to the ceiling, and I’ll put a sheet of plywood over the door to the rest of the building and seal it off so no dust is going under the door. No, wait – that reduces the number of fire exits my shop has by one, which is not good. I think I’ll make a curtain with a weighted bottom. That’ll be a moving blanket tacked to the door frame at the top, with a hem at the bottom full of stuff. 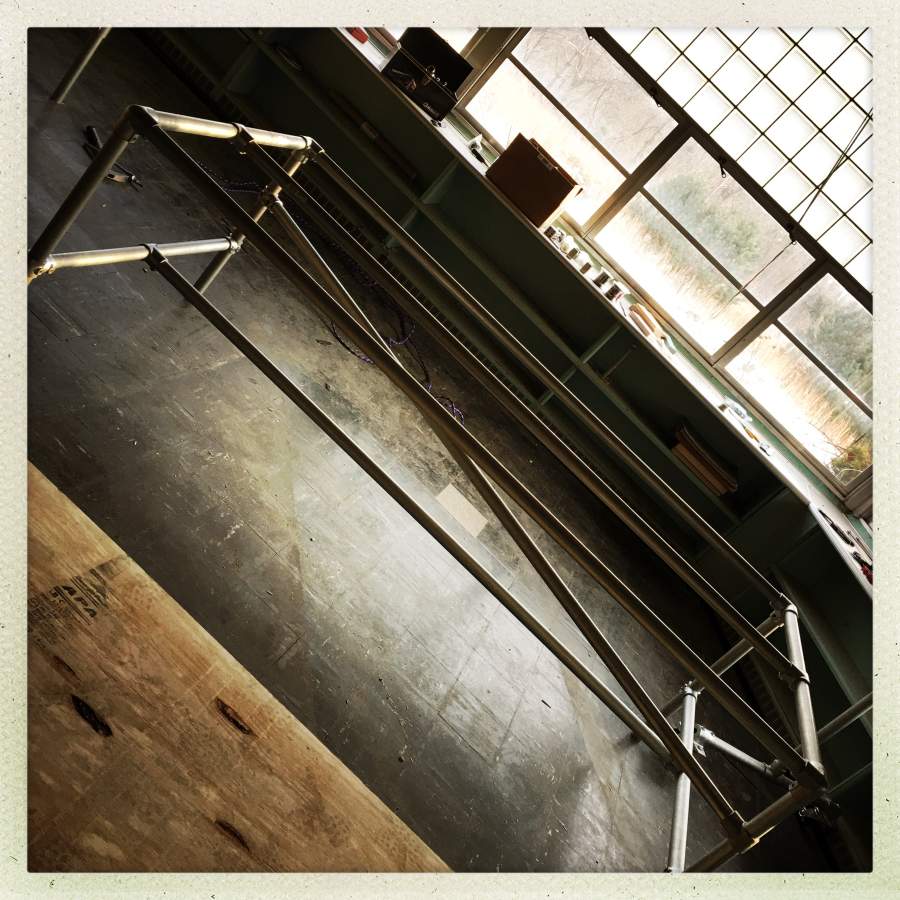 Perhaps this will give you some understanding of why I track the F-35 program: I am profoundly sensitive to the consequences of “mission creep”, “feature creep”, “specification creep” and “cost overrun.”

Time to call in a dumpster.

The beeswax finish on the oak plywood of Grinding Bench 1.0 was not so great – hot sparks stuck and clung and burned their way into the wax, refusing to come out. Grinding Bench 2.0 will be covered with a sheet of 20g brushed stainless steel. That should dust right off. Of course it means I’m going to have to figure out how to hammer a lip along the edge of the sheet. I may just haul it to the machinists – they have a bender and I won’t be stuck trying to make a mess of it with an oxyacetylene torch and a hammer.

When I have moved the grinder, I will re-do Grinding Bench 1.0 to be a 4×4 square, which will give me more room at the end near the windows, where I have the bandsaws. It turns out I spend a lot of time working the bandsaws and I don’t like being between the Scylla of a bench covered with hot stuff and sharp things, and the Charybdis of a metal-cutting bandsaw with a raker blade. A few more feet of distance would be comforting.