Lately, I’ve been thinking of wrapped handles – especially after seeing some of the beautiful work kestrel does, and some of the Japanese-style wrappings on Michael Bell’s sword mountings. What’s something tough, beautiful, interesting, weather-proof? 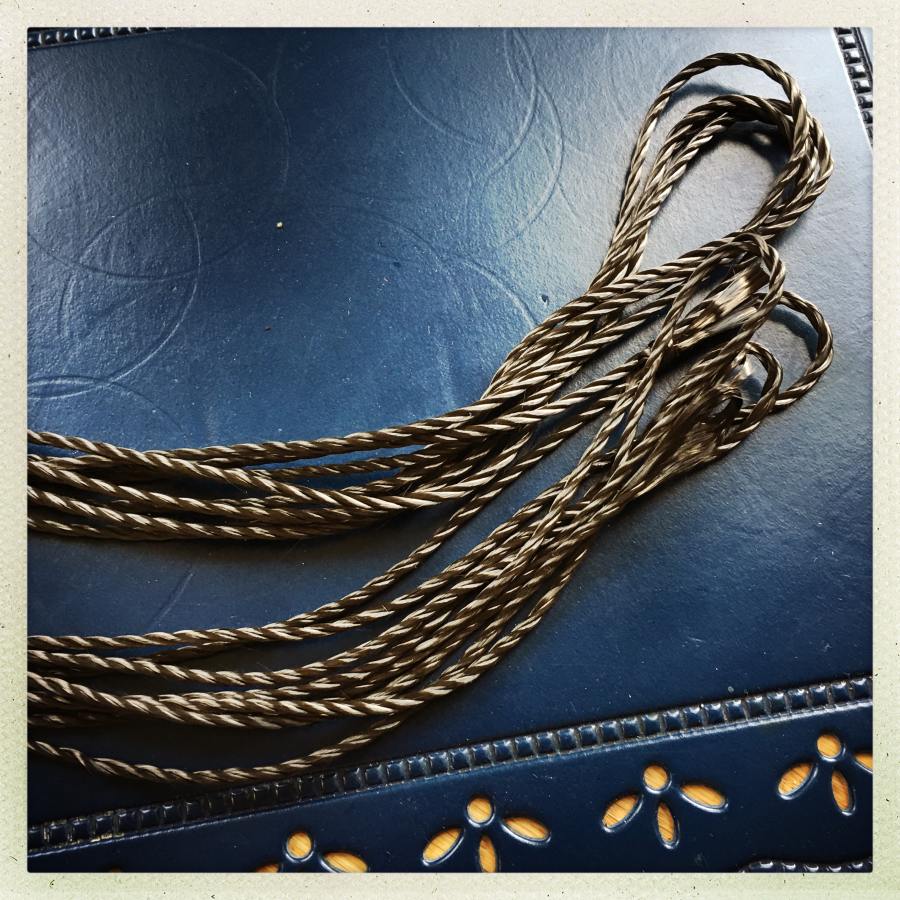 I got a piece of carbon fiber cord on Ebay, and it’s beautiful stuff. My plan is to leave it tied around the porch rail until next summer and if it still looks good, maybe I’ll think about using it on a handle. One of my pet peeves in the current knife-making scene is a lot of people just use stuff without thinking about its weathering properties. I’ve seen people assembling blades using glues that have no shear strength at all, and finishing them with urethanes that are incompatible with the silicones they are using elsewhere. After posting a few compatibility charts on the beginning knife-maker list on facebook, I gave up. By facebook’s nature, a problem becomes a moving target as whoever gets interested in the field drops in, starts from scratch, and asks the same questions immediately.

I got to the point where I was using my friend Andrew’s stock response, which was: “hours in the darkroom can save you minutes in the library.” This is how curmudgeons are made.

Anyway – the carbon fiber cord has to be felt to be believed. It looks like, and feels like, fine silk – but it has as much “give” in it as stainless steel cable. I.e.: none at all. It feels like you could tow a tractor with it. (“hey, that gives me an idea” as he looks out over the field at the neighbor’s tractor)

But then I got to wondering: is it dangerous to have nanotubes floating around in your environment? If I recall correctly, we don’t entirely understand the process whereby asbestos causes mesothelioma – other than that the fibers ‘irritate’ cells (I assume that means “penetrate and kill”) which increases the body’s tissue self-repair rate, while also increasing the chance of DNA getting damaged. Boom: cancer. I lost a friend, Dan U., to mesothelioma in 2012 – he was one of those once-strapping lads who was too tough to wear a filter mask while he worked on an asbestos abatement project to get college money. He was dead at 40.

This seems to me to be an unknown. I did some searches on medline and it appears that “we don’t know yet” is the consensus. Which means, “maybe having carbon fiber knife handles is a bad idea.” It might not be a bad idea, but it might be the equivalent of thinking “wow this fire-retardant asbestos’d make a great knife handle because it’s fire retardant and that’s just tactical as heck!” I did more research and one thing I saw, which I came to dislike, is experienced knife-makers teaching other people how to take a chunk of carbon fiber and turn it into airborne dust particles using a belt sander. If you’ve never used a serious belt sander, you don’t know what dust is (unless you have experience brushing horses, which are great big bags of farts and dust as far as I can tell) – you wind up with a layer of dust on everything and all over you. I started to wonder if knife-makers should be wearing tyvek bunny suits and positive pressure respirators while they work on the stuff. That’d sure dampen enthusiasm for that as a handle material.

Another handle material I wonder about is fossilized bone. First, it smells like a cat’s butt when you’re grinding it, but it’s porous and it’s been harboring dog knows what kind of generations of anthrax or whatnot. I don’t use fossilized bone, but a lot of people do.

I’m sure wood’s bad too. Back when I was in college I did some dagger handles in ebony, and I was hawking up black goop from my sinuses for weeks. Maybe that was a fatal injury, like Dan’s.

Dust management is a huge problem and I’m going to be getting to that, and discussing that in more detail later, but in the meantime: do any of you know about dangers inherent in raw carbon fiber nanotube material?

I know that most applications of carbon fiber involve bonding it with some kind of epoxy or polyurethane resin. That keeps the stuff from abrading and flying all over the place, but the resins are generally going to degrade over time or exposure to the sun. Using resins for knife handles is also a big rage, but I’m not convinced that’s a great technique, either, because it may not weather well. I think I’m going to make a couple of handle slabs out of resin and tie them to the porch railing with this nice carbon fiber cord, and I’ll see if there’s anything left, this time, next year.

“By facebook’s nature, a problem becomes a moving target as whoever gets interested in the field drops in, starts from scratch, and asks the same questions immediately” – this was the problem that resulted in people writing “Frequently Asked Questions” (FAQs) back in the USENET days. [fwfaq] [otpfaq] I just kept thinking “oh no, not again. I am not writing another FAQ.” But someone’s gotta do it.

The American Way of War » « Pickling and Canning