Pickled beets are ridiculously easy to make, they just require a bit of time. They’re a perfect project for a sunday morning (since you don’t waste time in church!) or a rainy day.

You can put all sorts of things into the pickling juice. I have a friend who puts chili/garlic in so they come out kind of like kim chee. A typical recipe like this one: [lbc] has the basics: sugar, salt, vinegar, a hint of cinammon. 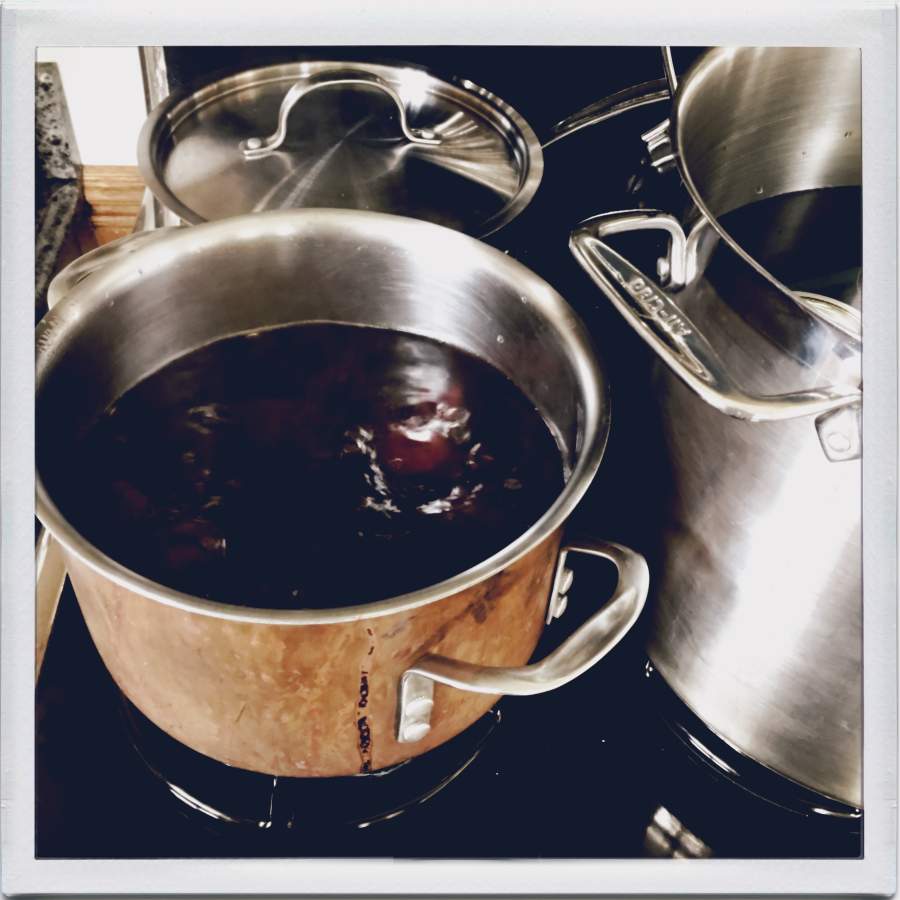 About 8 or 9 big beets or the equivalent will fill 5 largeish canning jars. How’s that for precise?

Don’t peel the beets, or cut the greens off close to the top. I just whack them off about 3″ from the beet. The greens don’t taste great in my opinion. They’re also more likely to have gunk on them. I rinse the beets, maybe scrub them gently to get dirt off, and that’s it for now.

One of the great things about canning beets (or cabbage or peppers) is that precision is not a requirement at all. The only thing you really need to be careful of is your sanitary technique. So, a word about that:

Don’t touch your face, put your hands on your counter, pick up the cutting board you just used to debone a chicken – that sort of thing. I like to do this process so that I’m not doing anything else. It reduces the chances of things going wrong. But the odds of things going wrong, honestly, are pretty low. Use the mason-style jars with the indicator top (the little spring region that pops up if the pressure in the jar goes up – a sign of bacterial action) If the top pops up don’t even open it. Put it in a bag, tie it off, and toss it out. If stuff starts growing in the jar, bag it and get rid of it – don’t go sniffing at a pseudomonas culture going “wow that smells bad.” Yes “smells bad” is evolutionary programming trying to tell you to stay away. I’ve done a lot of canning in the last 20 years and only ever had one can go bad and I knew it was going to happen (trying to sterilize a culture using a microwave instead of slow boiling it).

In the picture above, we have water and beets (you’ll add stuff to the water later) and in the pot next to it is water with the canning jars. The canning jars are completely submerged and are filled with water, then the whole thing is brought slowly to a gentle boil. Do not tighten down the lids of the jars. Coincidentally, the beets are completely submerged in water and also brought slowly to a gentle boil. Keep the beets at a gentle boil for about 40 minutes. The jars, too. You can turn them down a bit if you want but I leave them hot. 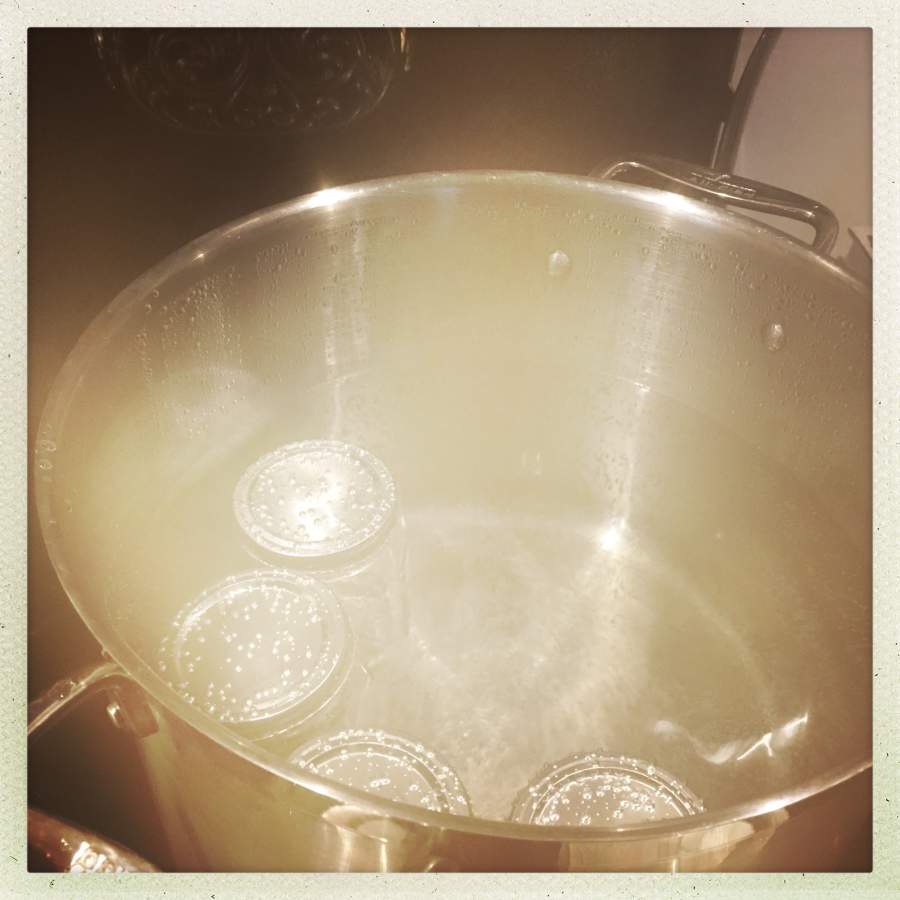 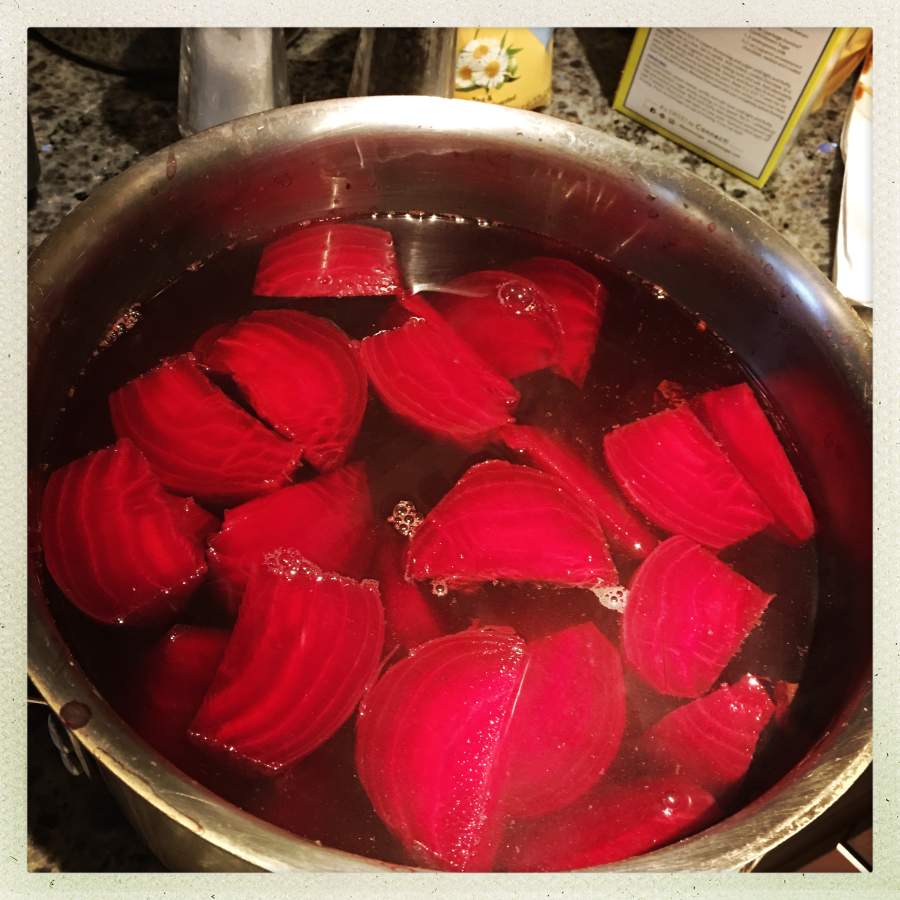 When the beets are cooked, the skins will slide right off with a fingertip.

Fish them out of the juice with a spoon or something – don’t dump the juice you boiled them in!

I use a butter knife and just scrape/peel them off. Then cut them up like oranges and toss them back into the juice pot. When they’re all cut up, I add the other stuff to the pickling sauce:

Then fish the jars out of the boiling water, one by one, dump them out (into the boiling water pot) and fill them with beets and juice to about 1/2″ or 10mm from the top. Try to keep the beets covered with juice. There should be plenty of juice and beets but you may wind up with too much of one or the other. Plan better, next time!

Joking aside, if you get desperate for juice you can add a bit of the boiling water you’ve got going on right in the next pot over. 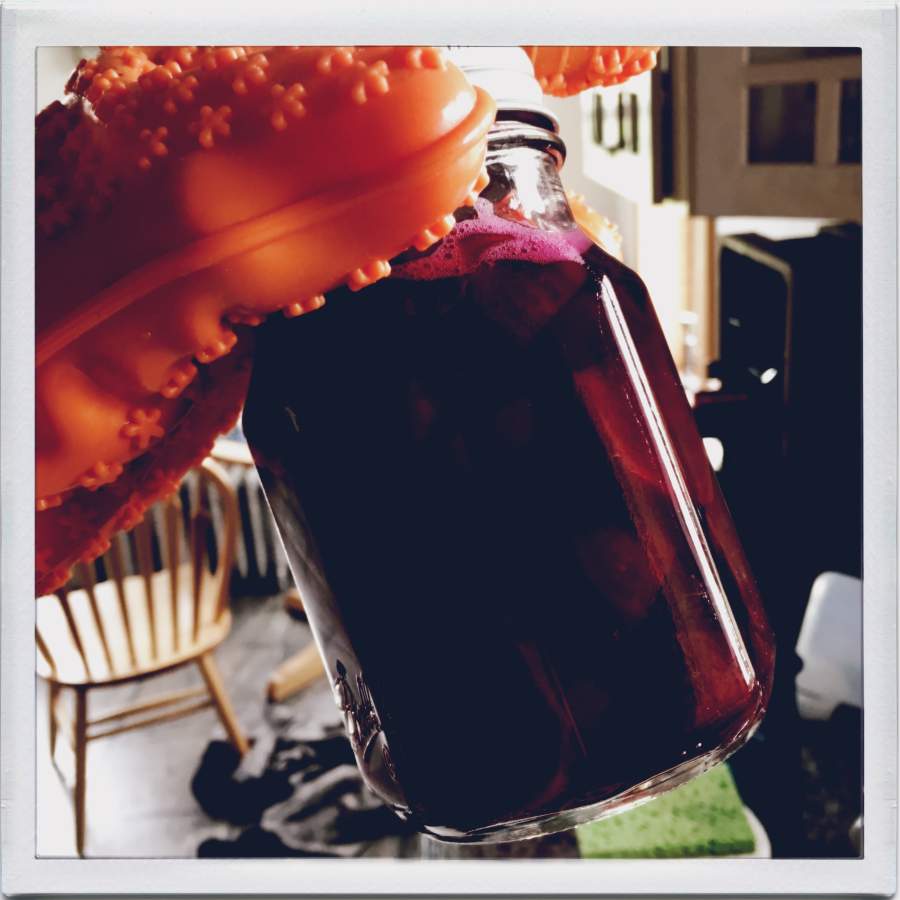 A note about the orange cthulhu-mitts: that’s an “etekcity silicone oven glove” and I highly recommend them. They are about $20. They’re kind of amazing: you can reach right into the boiling water and pull out a jar, then handle it for quite a bit, without any problem. Be careful not to let the gloves heat up too much, though – if you reach into boiling water you’ll be fine but don’t fart around in there and if the temperature starts to build up run cold water over your hands fast. Just think of it as a problem of thermal management (which it is) and you’ll be fine. It does feel exceptionally weird to reach your hand into a huge pot of boiling water. Try it with a finger or two first and have cold water running so you can get an idea how long you’ve got. 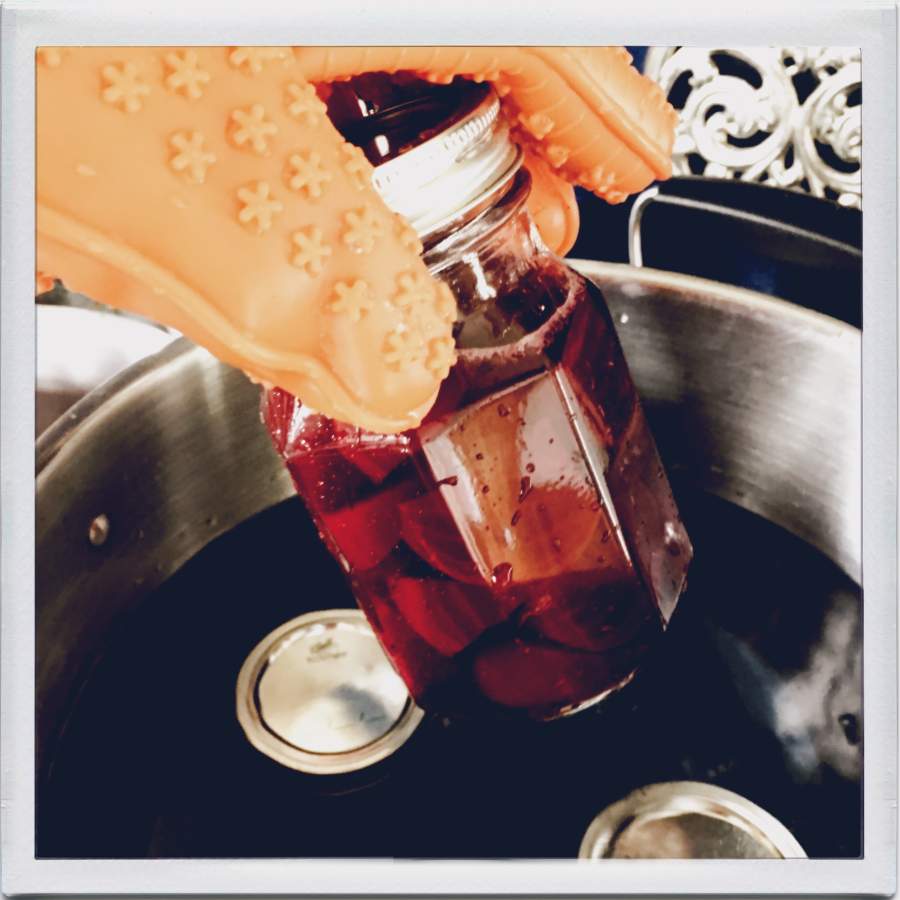 Put the lids on loosely (but not so they will rattle off in the pot) and put the jars in the boiling water for another 10-15 minutes. After that you can fish them out, tighten the lids, and put them somewhere to cool. When they are room temperature I put them in my refrigerator (I usually have lots of space in there)

Caine was my #1 product tester, among other things. I was always testing new soaps, blades, paper, whatever, and she was always very patient. I had been planning to send Caine and Rick a jar of these when I came upstairs, fired up my email, and read a message from Rick that she’d died. I’ll probably always associate pickled beets with her, now. I remember when I first showed up on Pharyngula, in the scienceblogs days, she helped break my attitude in. I’m going to miss her.

Sunday Sermon: The Truth Leaks Out » « The Real History of a Time