Here’s the part that horrifies me: when I hear “wedding party hit by air-strike” I assume that it’s notable because it’s a wedding party, and that what we’re seeing is just probability in action.

Lots of other people are getting killed, too, but we just hear about the notable bombings. I suppose part of that is setting up a circular notion of “notable” – we noticed it because we noticed it. But than that means there is a gigantic amount of misery going on that is not notable – it’s the tip of the iceberg that we see, not the much larger mass below the surface.

This is slightly old, but it’s happening all the time [nyt]

Wedding Is Hit by Airstrike in Yemen, Killing More Than 20

I can’t read that without noting the Orwellian elements: the use of passive voice (“is hit”), the vagueness (“more than 20”), and the blurring of the importance of the individual. Does the individual matter? “More than 20” were killed – does it matter that one of them was the bride? Or that the would-have-been groom was badly wounded, too, and wound up in intensive care?

When I read the article with a deconstructing eye, I can’t help but see how the New York Times is complicit in downplaying the event. Let’s look at more:

An airstrike on a wedding party, carried out by the Saudi-led coalition waging war in Yemen, killed more than 20 people and wounded dozens of others, including the groom, Yemeni officials said Monday.

The airstrike was carried out by “the Saudi-led coalition” – the Times gently points us toward Saudi Arabia as the perpetrators. After all, they are leading the coalition. How many of the Times’ readers are aware that France, Britain, and the United States are part of that coalition? In a non-bizzaro-world version of The Times wouldn’t that read:

When we read The Times’ take on the event, is it unintentionally directing the reader away from the US/French/British involvement in what is clearly a war crime – or is it intentional? To what degree is The Times complicit, as propagandists? Are we willing to believe that professional journalists, who are supposed to analyze and report on events, managed to accidentally hit on a formulation that directs the reader’s attention away from the US/French/British involvement?

The strike hit an isolated village in northwestern Yemen, where families had gathered to celebrate, late Sunday.

Because strikes, you know, just do things like that. It’s what they do. The Times directs us away from the facts – the precious facts – while still reporting on the event. There are some facts: “the strike hit an isolated…” but more facts are left out. Whose aircraft dropped those bombs? Why? Under what rules of engagement does ${whoever} have such poor fire-control that their strikes hit a wedding?

It fascinates me and horrifies me at the same time – here we have one of “the world’s great newspapers” – and they’re not serving the news, they’re manipulating the news. It’s like reading a piece by Sam Harris [stderr] and slicing it finely, only to discover that it’s extraordinarily manipulative. Which leaves you with the question: “is this manipulation accidental or deliberate?”

To ask the question is to answer it: nobody is instinctively or accidentally manipulative like this. It doesn’t happen. Pathological liars sound like Donald Trump – disconnected from reality – whereas this is finely manipulating our reality through careful and deliberate use of language.

After the attack, people posted online what they said were survivors collecting mangled and charred bodies. One widely shared video showed a young boy clinging to the shirt of his dead father, crying, “No, no, no.”

Such a fascinating construction! “… what they said were” throws a very slight shading of doubt. Were they, or weren’t they the survivors? By implying a slight uncertainty the New York Times is dangling red meat for conspiracy theorists to make sandwiches of evil from – maybe those people were “crisis actors” or something. Am I demanding too much honesty, here? Am I being unreasonable? Why doesn’t The New York Times report this as:

After the attack, people posted pictures of survivors collecting mangled and charred bodies.

It’s similar to the process of deconstructing Sam Harris: if he adds an extra word where he otherwise might not have had a word, you check and see if that word is manipulative or otherwise carefully chosen for effect. The writers at The New York Times are better than Harris; it’s doubly distressing to see them making the same maneuvers.

The Times offers some analysis, a ways into the article:

Saudi Arabia, the United Arab Emirates and other Arab countries, with support from Britain and the United States, have been bombing Yemen for more than three years to try to remove an Iranian-aligned rebel group known as the Houthis from the capital, Sana, and to restore the internationally recognized government. 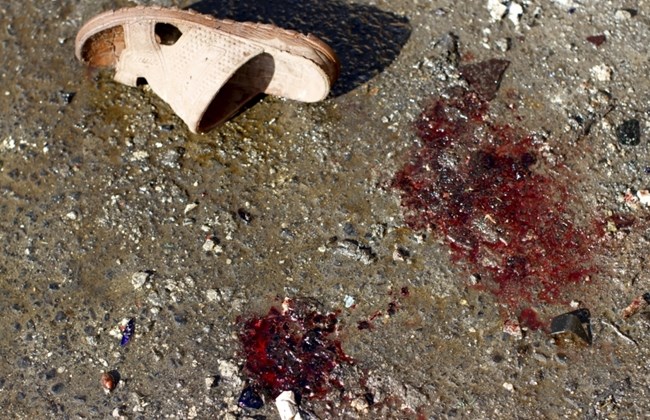 Now, we see a statement of fact. That’s nice and direct, isn’t it? Except it’s subtly keeping its thumb on the truth-o-meter, by accepting as fact one part of the sentence, in order to ease through the idea that another part of the sentence is also factual. What do I mean? Imagine if we re-wrote that sentence to present the same standard of truth as the sentence we looked at earlier:

Saudi Arabia, the United Arab Emirates and other Arab countries, with support from Britain and the United States, have been bombing Yemen for more than three years supposedly to remove an Iranian-aligned rebel group known as the Houthis from the capital, Sana, and to restore the internationally recognized government.

Is that a big difference? It’s much more subtle well-poisoning than Sam Harris uses, but this is The New York Times, we expect higher quality work from them. If that were “supposedly” were positioned in that sentence the way I positioned it, it subtly calls into question the claim that the Saudis are trying to “restore the internationally recognized government.” Let’s bend it further, for the purposes of stress-testing the sentence’s structure:

Saudi Arabia, the United Arab Emirates and other Arab countries, with support from Britain and the United States, have been bombing Yemen for more than three years supposedly to remove an Iranian-aligned rebel group known as the Houthis from the capital, Sana, and to try to restore the internationally recognized government.

The conflict has killed more than 10,000 people, displaced millions and caused what United Nations officials have called the world’s worst humanitarian crisis.

How naughty of “the conflict” to just go and do that. Let’s re-write that one, too:

Saudi Arabia, the United Arab Emirates and other Arab countries, with support from Britain and the United States have killed more than 10,000 people, displaced millions and caused what United Nations officials have called the world’s worst humanitarian crisis.

I’m just shuffling words around, but words have meaning. My choice of position and my choice of the words has radically changed the tone of the explanation, but my re-written version is true, based on what The New York Times itself said, just a few sentences earlier.

As Howard Zinn says, history is as much what we don’t report as what we do: what we leave out matters as much as what we put in. And when I deconstruct this reporting from a great, reputable, newspaper, my picture of historical truth turns to dust. Elsewhere, the same incident is reported as: [in]

Wait, what? They got the bride, too? Call me a romantic but the tenor of the story changes substantially when it’s reported with the death of the bride at her own wedding. I know that it does not matter – everyone who died or was wounded has suffered unnecessarily – but there is an emotional story-arc that gets invoked in me as I imagine the bride and groom, perhaps blown apart just as they were about to kiss. That emotional story-arc is manipulation (me manipulating myself, or more precisely “my emotional reaction to the situation as reported”) you can imagine how that flashing instant of fire and noise could be turned into a movie about those people’s lives and love.

The New York Times blandly carries forward one of the oldest attempts to excuse a war crime: “they’re not fighting fair.” Can we fault them for not mentioning that that’s no excuse at all? The fact that Houthis may be hiding in civilian areas does not excuse bombing a wedding.

Do you think it is unfair of me to declare that The New York Times has taken a side in its reporting of this incident? Is this fair and balanced journalism?

Propaganda embedded in everything forces me to run my brain extra hard, as I try to deconstruct the subtext  in everything. I realize that that’s what conspiracy theorists do; they cherry-pick out the confirming details in the text and the subtext. The way news stories are told today has made me so allergic to propaganda, I see it everywhere and that makes me want to shut down and stop reading, stop thinking, stop seeing. Because all I see is lies, lies, lies. The line between where I am, and a conspiracy theorist is they see lies, lies, lies, and fragments of truth.

I used to believe that journalists were concerned with the truth. I was so fucking naive. Like a lover betrayed, my hatred for them is profound, and I look at everything closer than before. I spiral into paranoia.