The Korean nuclear program was carried out secretly, and they acquired the components and capability to build a bomb but did not proceed to enrichment or to producing the firing circuits and weaponizing a deliverable warhead.

The US didn’t really complain at all, because it was the South Koreans. While the IAEA noted that some plutonium had been diverted and refined, they decided it was too small an amount to matter, so they didn’t issue a formal finding of noncompliance. The US did pressure France into not selling them the research reactor that they wanted. When South Korea signed the Non-Proliferation Treaty (NPT) there was no further pressure applied, and the South Korean government declared its desire to de-nuclearize the peninsula. 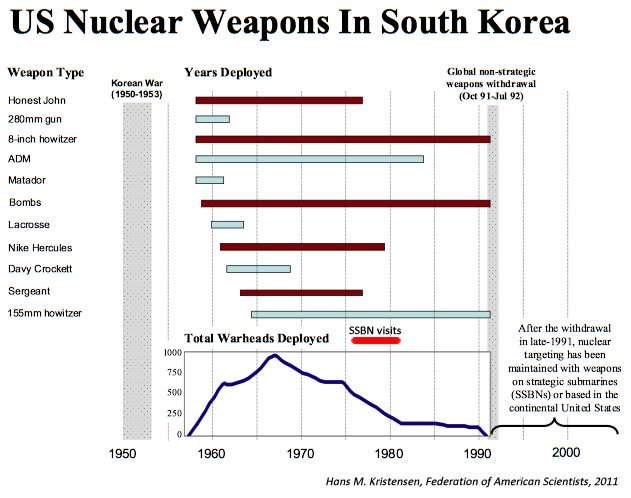 De-nuclearizing the Korean peninsula in 1970 would have been difficult. In 1969, there were over 800 US nuclear weapons, of a variety of types. The US began stationing weapons there four years after the Korean War wound down. If you’re into building time-lines in your head, and you know that the US Bomber Command continued to ‘service’ targets all over North Korea (killing over 1 million noncombatants) for over three years, the timing is pretty obvious: once Bomber Command had flattened North Korea the US moved in nukes so it could deter the North Koreans. The NPT was established in 1970, with South Korea signing it in 1975.

Section VI of the NPT says that all the signatories will work toward global disarmament; that’s a piece of it that none of the nuclear powers that have signed it ever took seriously, which is sad because it’s the main “quid” that goes with the “pro quo” – non-nuclear powers are supposed to not attempt to develop nuclear weapons and in return the powers will share with them the benefits of peaceful nuclear technology, and to look forward to a nuclear free world when the powers get around to disarming. They’re going to have to be very patient.

The other important part of the NPT that has been largely ignored is the non-proliferation part:

“Transfer” and “control” – what do they mean, in a treaty, and how are they interpreted? When the US signs a treaty like the NPT, those sort of words are interpreted Humpty-Dumpty style: exactly however we want them to be. 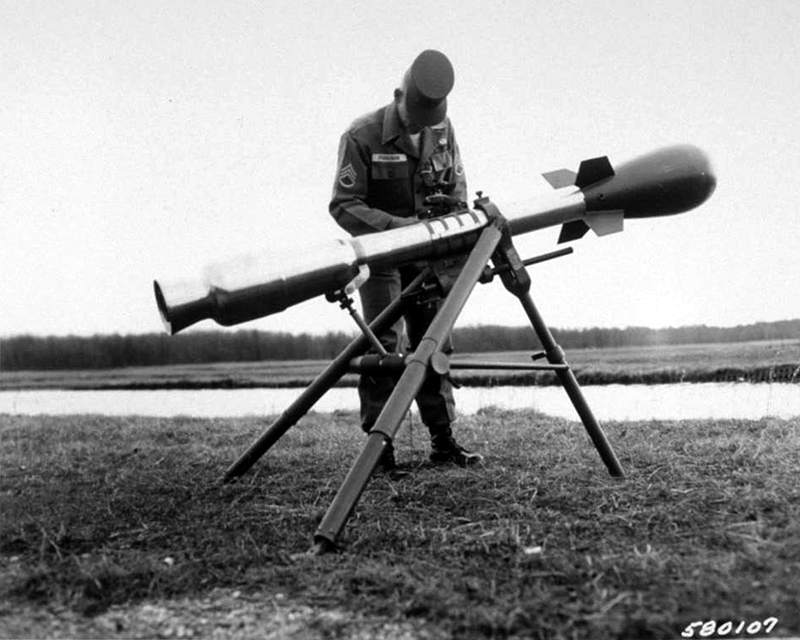 It was the United States that nuclearized the Korean peninsula in 1958, initially keeping them mostly secret (naturally) because most of the weapons deployed were intended to blunt Chinese “human wave” attacks in the event that there was another war like the 1950s one. The Chinese would have been understandably upset to know that the US had built up a massive arsenal right in their back pocket, capable of striking across the border with no warning of inbound missiles. In that sense, the US was following the grand tradition of militaries everywhere: preparing to re-fight the last war. There were some absurd weapons systems such as the ridiculous “Davy Crockett” rocket-bomb, which was a tactical weapon with a 20-ton warhead and a 1.2 mile range. It’s not true that the firer would be within the blast radius, but the weapon was so simple that it had no controls on it at all: anyone who got their hands on one could use it.

Allegedly the US removed its nuclear weapons at the request of the South Korean government in 1991. The US’ response was to step up “visits” by ballistic missile submarines. [fas] Basically, there’s a ballistic submarine within range of North Korea all the time, and there has been since 1991.

Recently, the US has deployed 800,000+ munitions of various types to Guam, almost certainly including nuclear weapons.

We sure know how to ‘denuclearize’ a place, don’t we? But it’s OK, we’re the good guys!

I have my suspicions about the South Korean ballistic missile program. Why build ridiculously expensive ballistic missiles just to carry 1,000lb (600kg) of high explosive? Theatre rockets like Multi-Launch Rocket System can do that. That payload weight is the giveaway: a basic nuclear warhead weighs about 600-900lb, depending on how modern/miniaturized it is; add control systems and thermal management for re-entry and you’ve got an nuclear missile.

Japan’s commercial space-launch capability is also easily weaponizable into a ballistic missile system. And, the US has violated Japan’s expressed desire to not have nuclear weapons stationed on their land.

If you look at nuclear deployments in terms of grand strategy, the Soviet attempt to put nuclear weapons in Cuba was “containment” of the growing US empire. It failed.

The US touts its ballistic missile subs as “deterrent” but (I bet you already know what I’m going to say) that’s bullshit: they’re also a very useful platform for getting a ballistic missile or a cruise missile close enough for a decapitating first strike. All that rigamarole around “freedom of navigation exercises” where China is trying to establish a naval buffer zone? That’s the US trying to maintain its ability to park nuclear-armed ships in China’s back yard. Imagine what would happen if Chinese nuclear-armed ships had a state visit to Veracruz? That won’t happen because a) the Chinese aren’t stupid and b) they saw that the US was willing to go right to the brink of a full nuclear exchange during the Cuban Missile Crisis.

If you’re starting to get the impression that maybe the South Korean government doesn’t want the US positioning weapons systems like THAAD in its back pocket, especially while they are trying to open discussions with the North Koreans – that impression is correct. What is keeping the Koreas at eachother’s throats? It’s US policy.

A Story About Dogs » « Nailed It