Welding has always seemed like a big scary thing to me. I really have no idea why. My favorite theory is that I’ve seen a lot of bad welding and I don’t like to be bad at anything, so I’ve just avoided it, coward that I am.

There are so many things that we do, which we need to realize that “everyone is bad at it, at first” – which applies, I think, to all learned behaviors. It even applies to most instinctive behaviors; if your parents have every shown you footage of your early attempts at walking, you probably know what I’m talking about. But I don’t want to jump into the whole nature/nurture debate this morning. 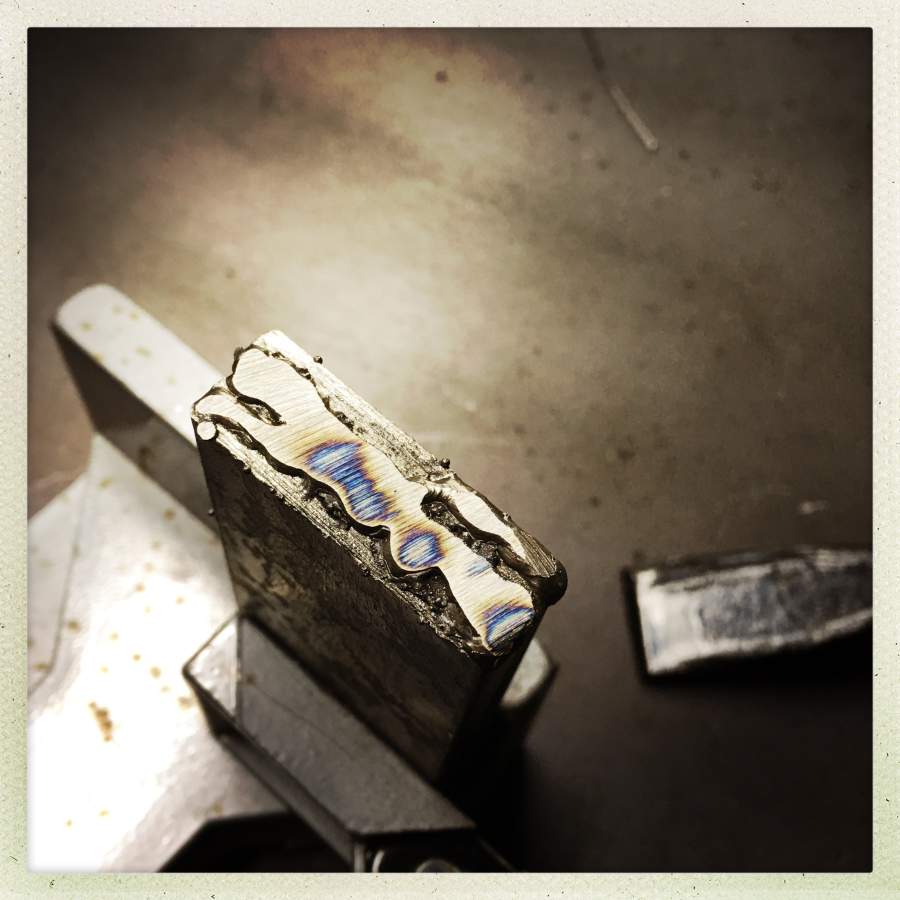 my first weld; ground down to see if the metal was strong

For forge welding, you pretty much are required to have a stick or MiG welder that you can use to tack together your stacked pieces of steel so they don’t shift around when you put them into the heat. It’s also very very useful to have a welder so you can tack a handle onto your work-piece, instead of having to rely on tongs to hold it when it’s in the forge. When I was at Dragonfly Forge, I was constantly struggling to figure out how to get a good grip on my blade without it slipping – more difficult than it seems because the tongs get soft from the heat, too, and then you’re hammering on your work-piece, which tends to shake it right out of the tong’s grip. 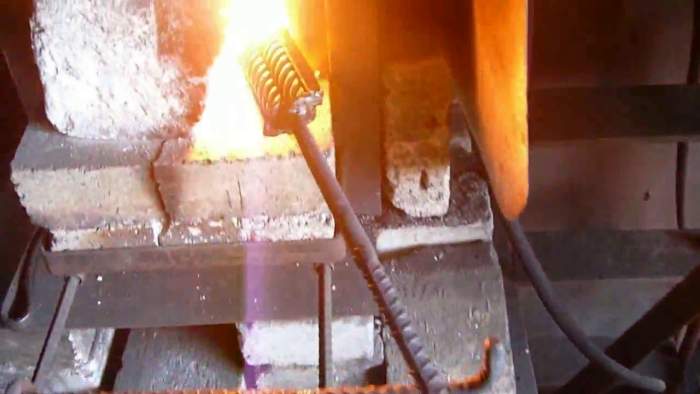 screen-grab from ‘shurap’ showing welded rebar handle on a billet

The state of the art solution is to weld your billet onto a length of rebar. Problem solved. That screenshot is from Ukrainian blade-smith Dimitry Shevchenko [yt] who does remarkable work in steel. When you’re done, you chopsaw off the rebar and grind the weld away.

So, it was a big hurdle for me – setting up a MiG machine requires reading directions and following them, then you gotta get a tank of shielding gas, etc. It was easy to just keep putting off and putting off. Monday I got my tank, yesterday I hooked everything up, and chopped a bunch of chunks off some mild steel stock, and embarrassed myself with a welder for about an hour and a half.

It is intimidating to have that sizzling ball of annihilation right next to your face, but it’s not as bad as I had feared. After an hour I was able to butt two pieces of steel together and not hate myself. 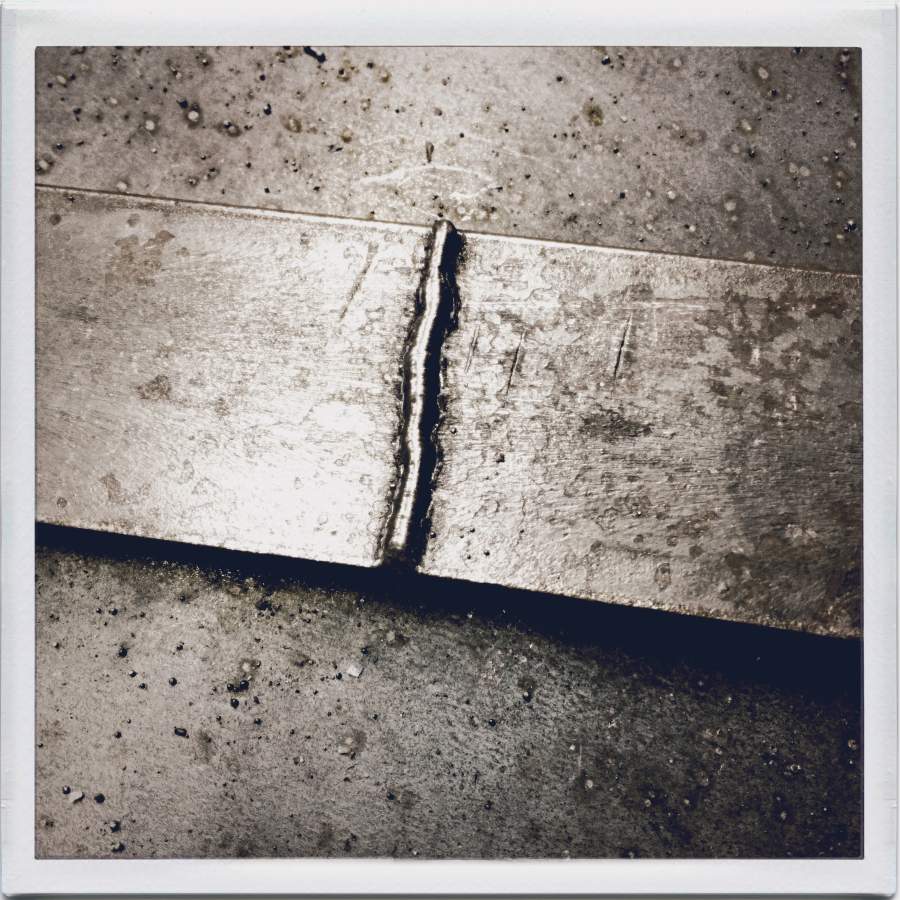 Yeah, yeah, I know that’s as meandering as Hadrian’s wall, but you should have seen where I started! As long as I am improving, I feel OK because I know that eventually I will improve enough that I won’t be embarrassing myself.

Accepting that we are beginners, always, and that we’re always improving – it seems like an important lesson in life. We can never jump straight into being good at things, unless those things are so easy that it’s no accomplishment to be good at them.

Meanwhile: other progress. I had the engineer from the propane company out and he took a look at everything and muttered things under his breath and decided that I needed to drill a 3/4″ hole through the wall so that the feed-line could come in. Sunday, I spent 2 hours with a hammer drill and shooters’ earmuffs and an increasing-sized selection of bits, and made an 18″ long hole through cinderblocks that had been filled with cement and allowed to cure since 1957. That accounts for my relative silence monday: my hands hardly worked the next day.

The propane tank install is scheduled for Feb 7. With a bit of luck I can test-fire the forge then.

Except for the propane, I am ready to go. Oh, yeah, I need to bolt down and wire up my grinder, and make myself a shop apron.

Yesterday I ran across discussion of the work of a bladesmith named J.D. Smith (I know, right?) who does some really gorgeous pattern-welding work. [jds] Apparently Smith has experimented extensively with adjusting the atmosphere in his forge and has figured out that if you run your forge so that the flames are burning all the oxygen up before it gets to the billet, the billet won’t oxidize, naturally. Oxidation is a huge issue when making pattern-welds since oxidized surfaces inhibit welding – the usual response of smiths has been to use flux, generally borax. Borax flux, when hot, corrodes the heck out of anything it touches and also can squirt out of a weld and onto you. The Japanese sword-smiths used rice hulls and grass that would carbonize (steel loves to stick to carbony stuff!) and the carbon would act as a flux. Shevchenko uses kerosene – the kerosene burns off and leaves a thin layer of  carbon behind and also serves as a flux. I find all this to be fascinating and all of the crafting I do is that sort of “what if?” directed trial-and-error. Playing with this stuff is going to be a blast.