Some of the fake news that the righteous fringe get is the Jim Bakker sort: it’s the end of days, buy our bucket of tasteless high-calorie chum. Sometimes I get really nasty stuff, like this.

I’m not sure what to call the subgenre of politics this is targeting – probably “anti-immigrant survivalist” or something like that. It’s from one of the same spam-senders that keeps offering me ‘tactical’ gear – aimed at the fear-addicted ignoranti: 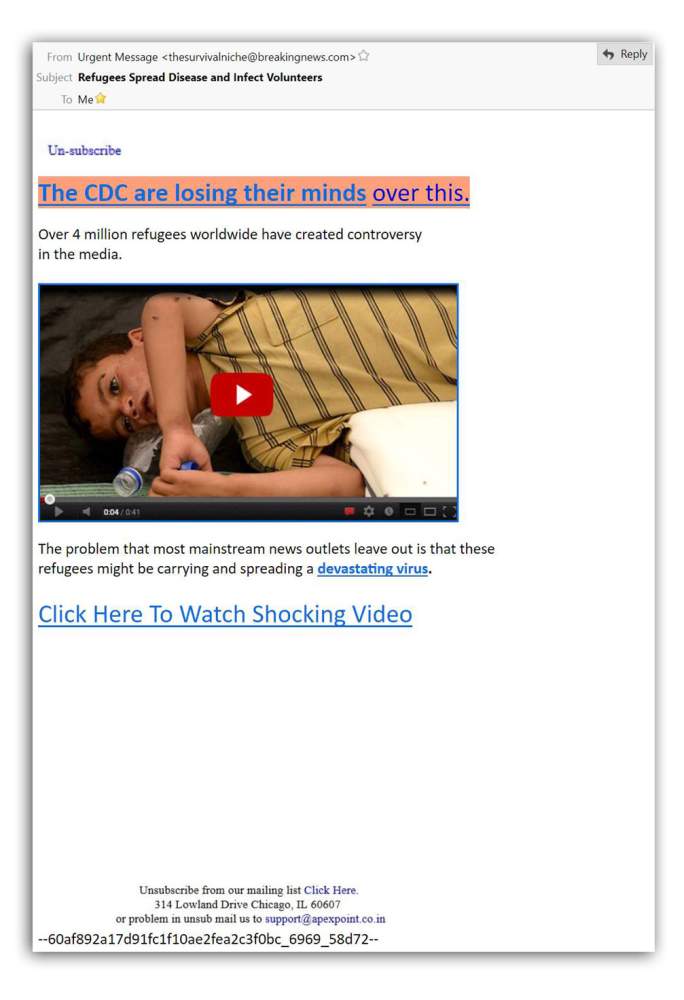 I’m having a little trouble forgetting the UN relief workers who brought a cholera outbreak to Haiti, but I doubt that the American fringe would care about that. And somehow I doubt they are thinking about the horrible, devastating viral plagues that the Europeans brought to the Americas, killing millions – those aren’t the immigrants they’re worried about here.

No, it’s playing into some bizzaro-land fantasy in which disease-bearing immigrants come here, probably from some Middle Eastern or African country that we turned into a failed state. The American prepper with the tactical gear is, not to put too fine a point on it, preparing to club down the victims of his own aggression. It’s just another way that America, a nation of immigrants and colonists, shits on people that are, basically the same as them.

The underlying appeal is the same one that American racists made from the civil war, onward: these dirty immigrants are going to infect your children, your daughters, and probably rape your women. So: buy guns and maybe a tactical spork to protect yourself. Part of the beauty of this appeal is that the customer will never get to find out that it’s all bullshit because they’ll never be attacked by an immigrant – the immigrants are almost certainly much more scared of Americans than the Americans have any business being of them.