Researching a bit about the Mizar, I stumbled across an account of the NR-1, written by one of its officers. [nr-1] If you’re interested in cold war exploration stories, and “going to sea in very awkward shipboats” stories, it’s pretty good. 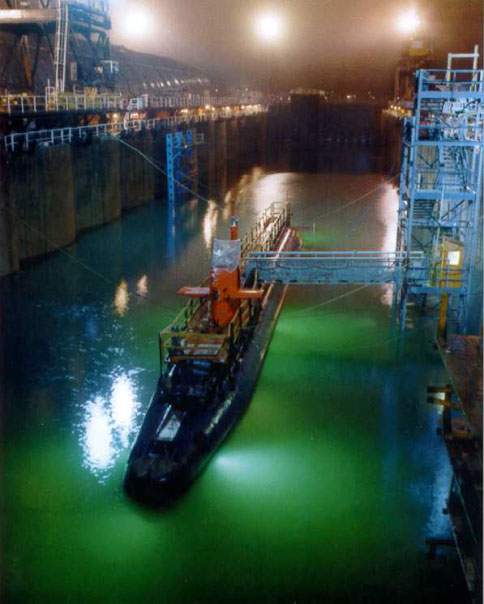 I had heard of Trieste and Alvin, naturally, they appear from time to time in National Geographic. The NR-1 doesn’t – its existence was mostly classified. For one thing, it was a highly unusual shipboat – while most deep sea exploration shipvehicles were small and cramped, NR-1 had a 145+ foot-long hull for a crew of 11, and was powered by a small nuclear reactor. NR-1 was a special project started by Admiral Hyman Rickover, the brains behind the US “nuclear navy” – a spec sheet for the NR-1 is on the Federation of American Scientists site [fas] – like everything Rickover built, it was amazing.

Most of the deep sea exploration and recovery shipcraft in the 60s and 70s depended on a surface tender; they’d dive down in the morning and come back up for air and resupply in the evening. That meant that they couldn’t go far from the tender, and they had to head to port in bad weather. The NR-1 didn’t have that problem – it could stay under for 45 days, if necessary. Apparently the main constraint on its dive-time was the size of “the brown mountain” in the sanitary tank. The author reports one encounter at sea:

The sub’s crew members who had gone aboard the tow ship took turns dropping their empty beer bottles into the churning wake so the glass containers would drift back and knock against the bobbing submarine, irritating whoever was standing watch on the bridge.  But having been kept in the Azores until it was too late to avoid the North Atlantic storm season, the Mizar was soon barely able to make headway in the strong seas with the NR-1 in tow, so the ocean tug USS Kiowa was summoned to take over.  The Kiowa was used to rescuing huge vessels like battleships and messaged her first question, “How much diesel fuel do you have?”

“Well, how long can you keep your power on?”

It took the tug’s veteran chiefs a while to figure out how to work with the small nuclear-powered sub, but they adjusted, got the ships aligned, then turned the tug’s blunt nose into the rough waves and headed for Connecticut. 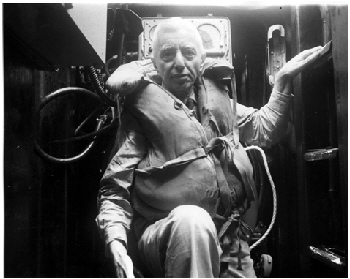 Rickover in the “doghouse” – the sail of the NR-1

The account of NR-1‘s sea trial is also pretty fascinating. It was at the time when Hyman Rickover was at the height of his power and prestige, and he had a legendary approach to sea trials: he would be aboard and pilot the ship. If there was a problem on the first dives, the shipyard at Groton or Electric Boat would get to explain to the President how they had managed to lose a US Navy Admiral.

In my previous posting about submersible stuff, I made a time-line of how the discovery of the Titanic in the 80s does not line up with the undersea exploration capabilities that were cruising around the area at the time. [stderr] I was looking for mentions of Titanic in the NR-1 book, but instead I found something just about as interesting:

The LSD flooded her dry well and dipped her aft section below the surface, and using only handheld flashlights for illumination beneath the tent, the NR-1 slid into the warm, salty waters of the Med and immediately dove to the sanctuary of the bottom, where it came to a dead halt.  The entire operation took only twenty minutes.  As long as the NR-1 remained deep, silent and motionless, it would not be picked up by Soviet sonar, because the floor of the Med is a centuries-old junkyard.  Ships of a dozen vanished civilizations litter the seabed and it is impossible to tell one from another.

I had never really thought of that, but it does make sense – if you’re looking for a Soviet SOSUS sensor at Gibraltar, you’re looking at a part of the Mediterranean that has had millenia of shipwrecks of all types. What an amazing thing, to be able to fly around in that.

While on the mission, the NR-1 caught a glimpse of its future by seeing the distant past.  On the floor of the Med, the submarine, with its view ports and TV cameras, was able to see things that had lain buried in the silt for untold eons.  Steering through one passage, it rolled up on the skeletal remains of what was believed to be a galleon that had sunk during the years when the Italian peninsula was a mere province of Greece, perhaps even prior to the rise of that great civilization.  The wood had disintegrated over the centuries, but the iron fittings were still there, as were remnants of the scattered cargo.

A jumble of amphorae on the ocean bottom reveals the final resting place of an ancient Roman merchant ship
(http://www.fas.org/man/dod-101/sys/ship/docs/nr_1.htm)

The discovery had nothing to do with the official mission, so the find was more of a curiosity than something to be studied.  Jack Maurer reached the manipulator arm out, gently plucked up a vase, and put it in the collection basket as a unique souvenir.  He thought little of the peculiar artifact as years passed, and left it on a shelf in his home until the day it was broken when the Maurers moved to Monterey, California.

An art expert spent three months carefully piecing it back together, and encouraged them to have it identified.  A curious archaeologist from the de Young Museum in San Francisco determined that the beautiful vase, some ten inches in diameter and nineteen inches tall, was either a Greek or Phoenician amphora dating from the third or fourth century B.C.  When experts wanted to know how such a rare piece of pottery had come into his possession, Maurer could only reply with a mystifying, “Sorry, I can’t tell you.”  He also did not want to reveal that after picking up that one small vase, the NR-1 rolled right over a lot more of them as it continued on its true mission.  Science still wasn’t a part of the job, but the little vase was a harbinger of great discoveries yet to come.

Perhaps this accounts for the boom in underwater archaeology that started in the 1970s – it seemed to me like every month, Jacques Cousteau and Calypso were on another National Geographic-sponsored exploration of another sunken ancient ship. But it’s not as though submersible spooks would have anything to do prowling around the Aegean off the coast of Turkey, during the cold war. Would they?

Once again Robert Ballard “found” the ships on an offset time-line, again with support from National Geographic. [cj] Were the ships that were found in 1999 actually found by spy-ships long before?

TEL AVIV, Israel — Phoenician mariners sailed more than 2,500 years ago into the uncertain waters of the Mediterranean, praying to their storm god for a successful voyage — only to meet death in a fierce tempest.

The vessels’ cargo — large ceramic containers of wine — probably was headed to the Pharaoh’s table in Egypt or to the Phoenician colony of Carthage in present-day Tunisia, Ballard told a news conference Wednesday in announcing the discovery.

The ships’ contents indicate they set sail from the Phoenician port of Tyre — now a city in Lebanon — around 750 B.C. Both vessels were transporting hundreds of ceramic jugs, called amphorae, filled with wine.

Remarkably, the amphorae were found intact, stacked snugly in rows, unlike the shards typically unearthed on land. Archaeologist Lawrence Stager, one of several Harvard University scientists on Ballard’s team, said the discovery of the pristine jugs “was one of our greatest moments.”

The ships also were almost perfectly preserved — a result of the bitter cold deep-sea waters, where sunlight can’t reach, the pressure is intense and sediment scarcely accumulates.

I have no problem with this, at all. I just think it’s interesting. Note that Ballard’s discoveries, unlike Cousteau and Calypso‘s, are all deep water wrecks.

Also relevant to my earlier posting, the NR-1 book includes an account of the ship’s exploring for a Soviet version of SOSUS listening devices. Once again, the US is concerned that the Soviets/Russians are doing to it, what it’s already done to them. [stderr] This was in the 1970s.

Other pieces of puzzle snapped into place while I was researching these pieces. I already knew about SURTASS (SURface Towed Array Sonar System) which uses a differential imaging technique to get very precise echo maps from ship sonar; SURTASS is used – I believed – to attempt to detect deeply submerged submarines, but it may actually be used for mapping the ocean floor.

Back in the 1980s I knew a guy who worked for the part of Martin Marietta that built some of the SURTASS systems. One day he came over and gave me a cinderblock-sized chunk of silly putty. Apparently they have large quantities of silly putty because they use it to pack some of the delicate components of the towed array; the non-newtonian bounce of silly putty is supposedly exactly the right thing for that application. I could not determine (and he said he didn’t know) if silly putty was invented for that purpose, or whether it was just the right material for the application.

Unrelated: one of the ancient Roman trade-ships was carrying amphora of fish-sauce – basically, Worcestershire sauce: fish, guts and blood and vinegar, sealed and allowed to ferment. Apparently it was a major source of “umami” flavor for the Romans. Bon appetit! I’m also reminded of the fresh and still edible butter that was recovered with the Vasa– it was cold enough at the bottom of Stockholm Harbor!

Little Fentanyl Stories » « What Did They Know, and When?