The new cold war is sort of like “double secret probation” cold war: it’s a cold war that we’re not even going to admit is taking place, therefore not only can people not ask “why?” they don’t even know what to ask. Characteristic of the first cold war, the new cold war depends on lies: the Russians are doing bad stuff so we need to spend money or deploy troops or something, in order to stop them. It may even be true, but it’s lies by omission. [wapo]

BRUSSELS – Russian submarines have dramatically stepped up activity around undersea data cables in the North Atlantic, part of a more aggressive naval posture that has driven NATO to revive a Cold War-era command, according to senior military officials.

The apparent Russian focus on the cables, which provide Internet and other communications connections to North America and Europe, could give the Kremlin the power to sever or tap into vital data lines, the officials said. Russian submarine activity has increased to levels unseen since the Cold War, they said, sparking hunts in recent months for the elusive watercraft.

“We are now seeing Russian underwater activity in the vicinity of undersea cables that I don’t believe we have ever seen,” said U.S. Navy Rear Adm. Andrew Lennon, the commander of NATO’s submarine forces. “Russia is clearly taking an interest in NATO and NATO nations’ undersea infrastructure.”

NATO has responded with plans to reestablish a command post, shuttered after the Cold War, to help secure the North Atlantic. NATO allies are also rushing to boost anti-submarine warfare capabilities and to develop advanced submarine-detecting planes. 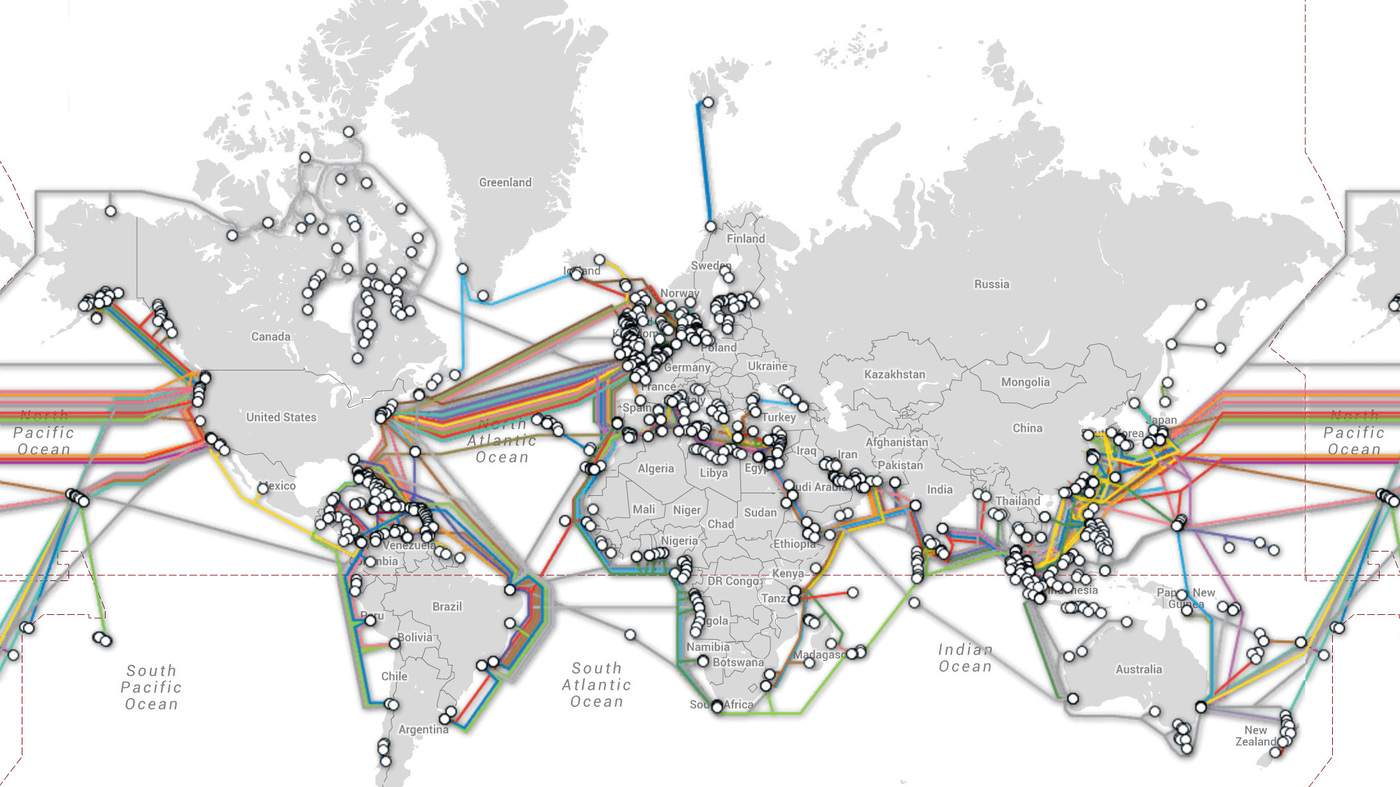 Map of submarine cable systems and their landing stations.

What’s more than slightly goofy is that the “command post” that is being ‘re-established’ after being ‘shuttered’ after the cold war is a cyber war command post. [wapo] Oh, got it: it’s not “defensive” activity, at all. The US and its allies have no idea how to defend in cyberspace, all they do is attack. There are other parts of the story that are being de-emphasized: the underwater cables carry civilian traffic; if there is NATO “undersea infrastructure” at play here, it’s because NATO made the mistake of piggy-backing military communications atop civilian infrastructure. That’s not to say that’s not a highly prevalent thing – it happens all over the place because laying private fiber is expensive – but placing civilian infrastructure at risk in order to save money on military infrastructure is suspiciously like putting one’s antiaircraft battery next to a hospital in order to save on parking. One of the problems with cyberwar is that it blurs the lines between military and civilian on both the offensive and defensive side of the equation: preparing to attack almost always means attacking the target’s civilian infrastructure, defending one’s own systems means taking civilian infrastructure exposure into account. If you’ve been watching what’s been going on in US cybersecurity policy, the government’s attempts to help fortify civilian infrastructure consist of: complaining a great deal about Russia, China, and North Korea. 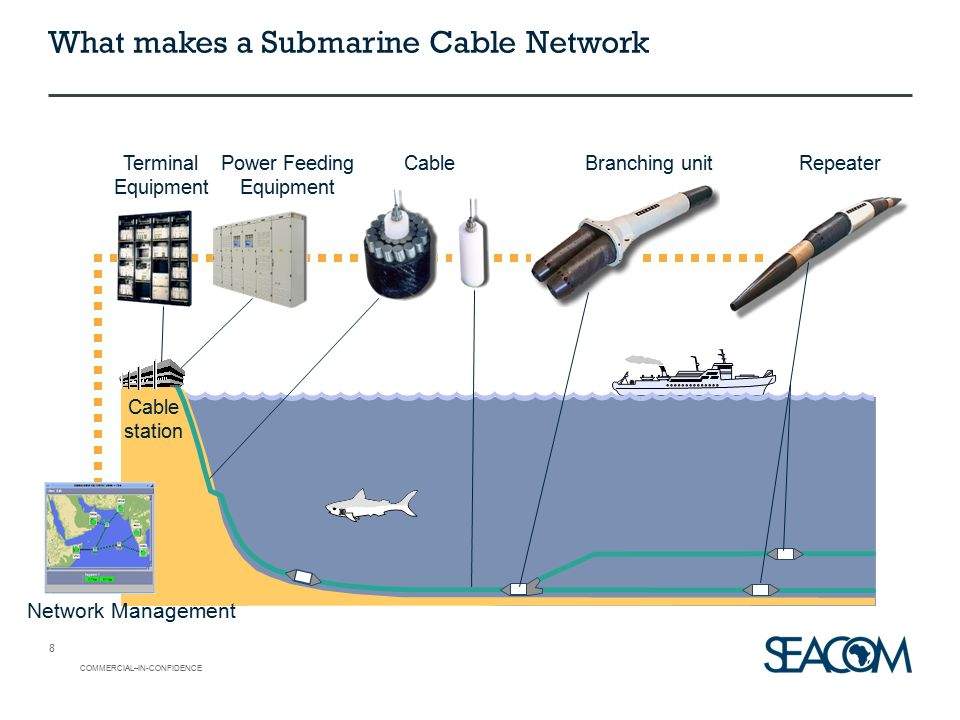 It oughtn’t shock anyone at all to know that fiber-laying is big business and there are plenty of companies that specialize in sending people down into dark, cold water to debug, repair, or destroy lines. There is an entire ecosystem of companies that provide branching units, power repeaters, base power feeding, etc. It’s probably a given that the US NSA is tapping the hell out of fiberoptics into and out of certain places; perhaps they’re worried that the Russians are looking for unexpected branching units on their fiber? Or are they worried about unexpected branching units on US fiber? Either way, it was a bad game to get into, in the first place – though it was probably inevitable that someone would get into that game, eventually.

Frankly, any country that doesn’t expect their cable infrastructure to be attacked if they get in a tiff with a 1st world power, has probably been asleep at the cyberwar console.

Could Russia, or anyone else, cut undersea cables? Of course they could. They could also drop bombs on the termination-points – which is what the US appears to do when they go to war, nowadays. When the US launches an attack to “degrade command and control networks” that usually means that they just bombed some country’s civilian communications infrastructure to rubble; in case you have any questions, that was what the first tomahawk cruise missiles to hit Iraq did. There is no line between civilian infrastructure and military infrastructure any more; to be fair, in the US’ viewpoint, there never has been. That dates back to World War II.

The cable hit in Wednesday’s apparent sabotage was the South East Asia Middle East Western Europe 4 (SEA-ME-WE 4) – one of the main cables snaking under the Mediterranean, Mena said.

In the statement on his official Facebook page, Col Ali said the divers were arrested while “cutting the undersea cable” of the main telecommunications company, Telecom Egypt. 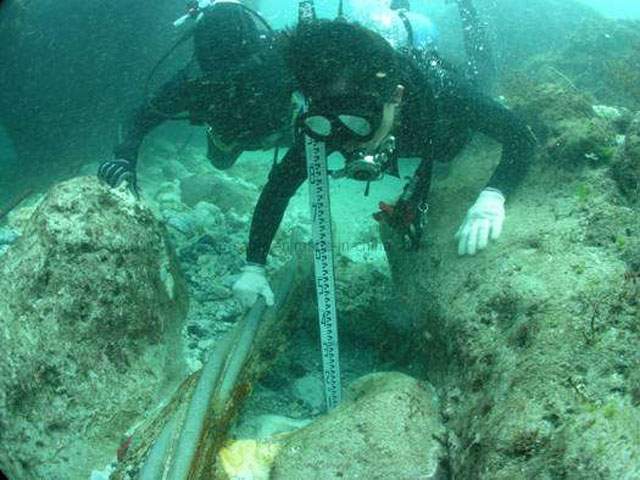 that’s a lot of armor on that cable

I couldn’t find any resolution regarding the divers: who were they? Who did they work for? This is not a leisure-time activity like bashing mailboxes with a baseball bat; one does not simply wake up one day and decide to undertake a dangerous dive with specialized gear so that they can make facebook a bit slower. Being the cynic I am, I assume those divers were not Russian because – if they were – it would be all over the news.

You’d think that there would be bulk encryptors at each end of a cable; that would also provide a nice way of detecting if someone began altering or injecting data. But, given how lame security tends to be, I’d be willing to bet that someone screamed “Eee! encryption will slow things down!” and the traffic is mostly plaintext. That’s how it is. That’s how it has been.

To get some perspective, we need to go back to Operation Ivy Bells, in 1969(?)-1970(?) [ib] back around the time when Cousteau was shaking the bubbles out of mixed-gas deep diving. I was an avid reader of National Geographic back then and I remember one volume had pictures of a military submarine with a “long term pressure chamber” for research in submarine rescue. I haven’t been able to find that issue, but there was a great deal of research being done in 1966+ on deep-diving and operations at the continental shelf depth. [Search for Conshelf I – III for some really interesting stuff!] While Cousteau’s teams were exploring what happened to people who were kept under depth-pressure for days, the NSA/CIA/US Navy were working on installing a cable tap on the communications cable the Soviet Navy had across the Sea of Ohkhotsk. The first generation taps had to be changed out manually (!) every so often, but eventually the system switched to nuclear-decay/thermal-powered taps that could keep a years’ worth of data. 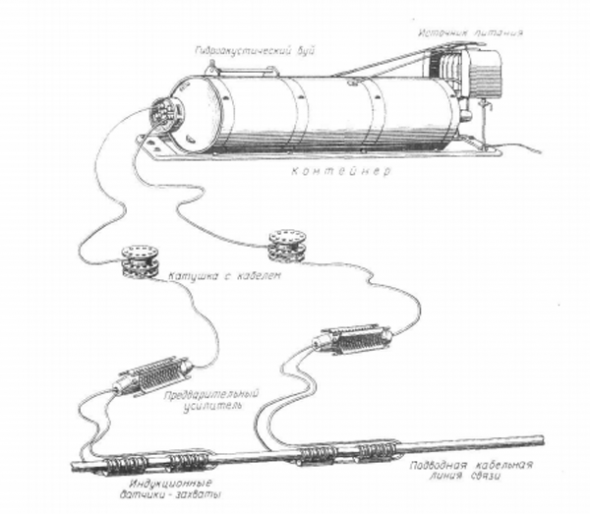 I’m not saying that we should ignore what the Russians are doing; they probably are looking at and mapping the cables. After all, that’s what the US did.

What annoys me about all this propaganda is that the American people remain ignorant (by design) of the deeper history that’s going on around these cold war events, and therefore fall for the message to “be afraid! be very afraid!” and whip out the checkbook whenever there’s a scary Russian spotted doing something scary, like the scary things that we do all the time.

Usually, when I hear someone from Washington ruminating about a scary thing the Russians might do, I assume that the US intelligence services have already done it, first, and are perhaps worried about being repaid in kind. I remember when Stuxnet first happened, and the US was busy fanning itself on the fainting-couch going “what if someone did that to us?!” 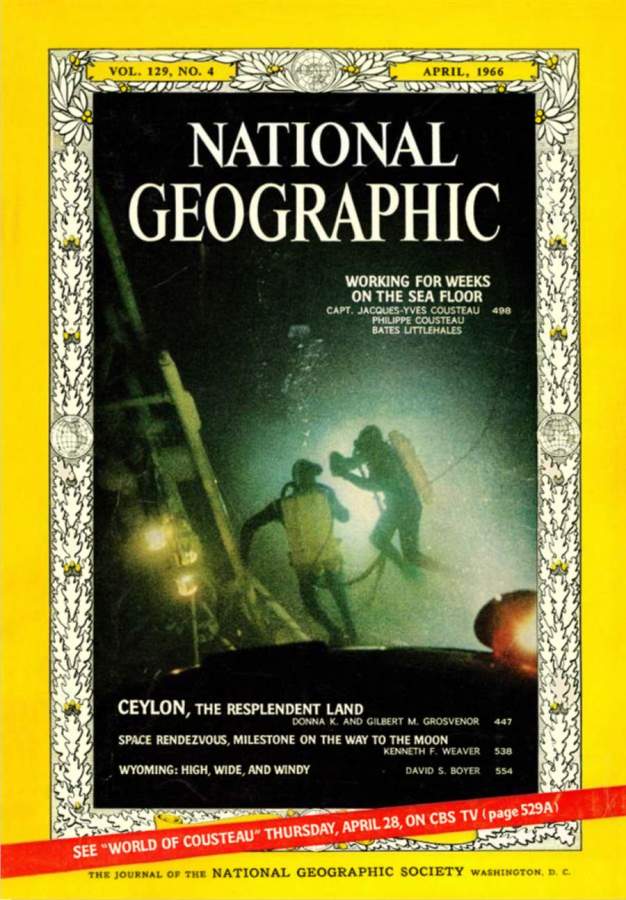 Watch that clever hand-gesture around “NATO” – what NATO are they talking about? The only NATO member that is on the other side of the Atlantic is the US. And the Navies of NATO are: the US Navy, the French Navy, and the tattered remains of the German and British Navies. This is just another move by the US to complain about Russian actions toward NATO when really it’s all about the US; NATO is just a stalking-goat for US naval hegemony.

The stories around Operation Ivy Bells are pretty amazing. For one thing, the project grew so large and important that there were multiple taps in multiple locations, and multiple submarines servicing them. One of the submarines, the Seawolf got stuck in muck on the bottom and the captain nearly self-destructed the boat to avoid having to ask for help.

If, by some chance, you are naive enough to think that the US is not carrying on the same kind of games, the USS Jimmy Carter, commissioned in 2005, is a surveillance submarine of the Seawolf class. I’m sure the name is a coincidence. [wik] [“Jimmy Carter has additional maneuvering devices fitted fore and aft that will allow her to keep station over selected targets in odd currents.”] [the week]