The last few days I’ve been limping around with every muscle in my body pulled and aching to some degree or another.

I started on wednesday with an empty dumpster. 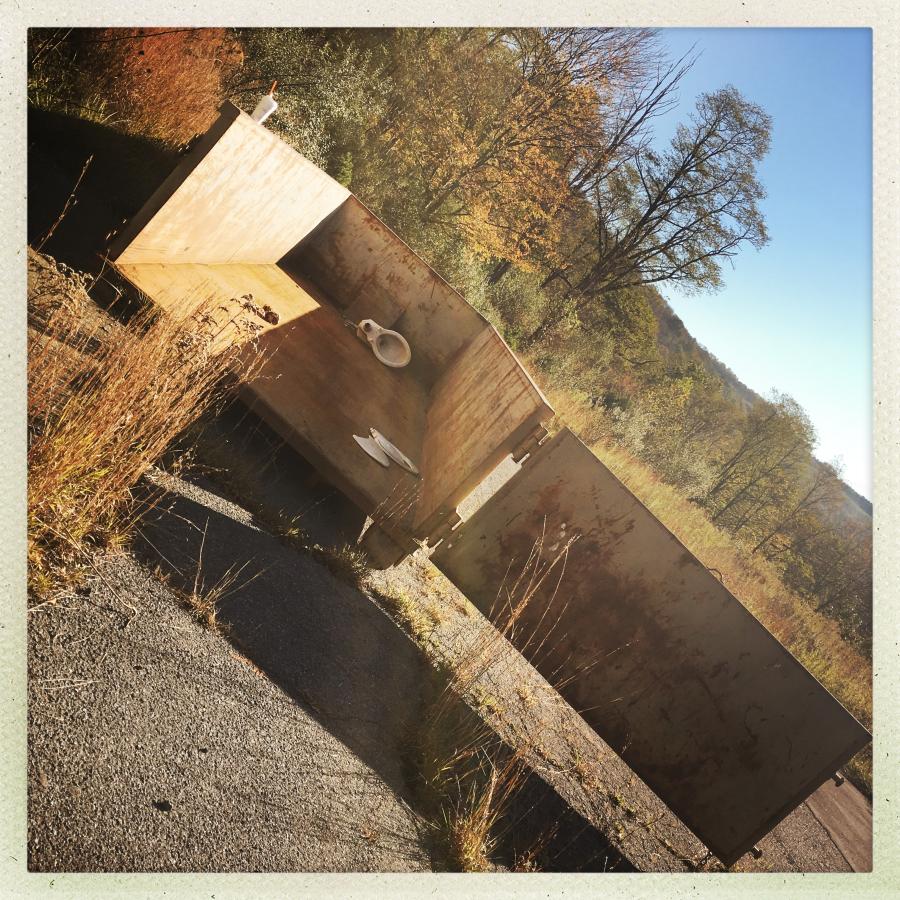 Well, mostly empty, anyway. The toilet is the old one I replaced 2 years ago; it has been sitting (“resting”) in the basement waiting for me to have a good way to get rid of it. 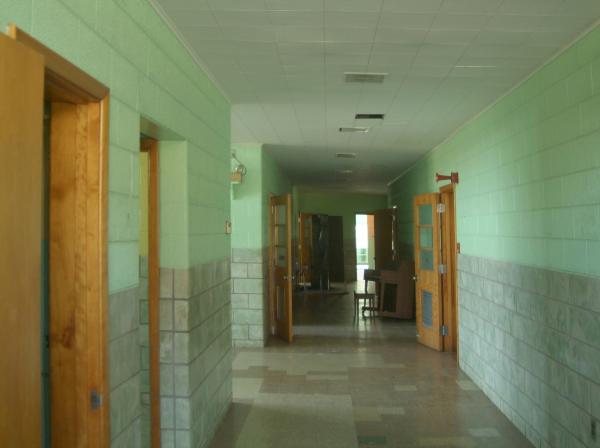 A brief bit of back-story: in 2006, I bought a decommissioned elementary school to use as a photography studio, woodshop, sewing room, darkroom, offline library, and place to store stuff. Basically, it’s a 5,500 square-foot closet with off-street parking on 9 acres with a view from a bluff over the west branch of the Susquehanna. I had been looking for a store-front I could rent in Clearfield, and turn into a studio/darkroom, but the real estate agent I was talking to said, “why not look at the elementary school? nobody wants it, and it’d be cheaper to buy it than to rent someplace.” So, that’s how that happened. I’m embarrassed by how inexpensive real estate is around here; let’s say that I owned the place outright for about $250/month. There are downsides, of course: fixing the roof has been a pain, it’s been broken into once and I spent a week running wire and installing an alarm system. When I got it the well pump was broken (since then city water has come through), I’ve had to put on MOPP gear and remove asbestos, etc.

Over the course of the last decade, I’ve done several “winter project”s – usually, I take some room of the building and convert it, or organize it, or sometimes mess it up much worse. In 2015 I retrofitted the girls’ bathroom into a steampunk-style darkroom for wet plates, in 2014 I renovated the 2nd grade classroom into a photography studio with a built-in cyclorama. My work-year usually has two seasons of busyness: spring and fall – winter is fairly dead. So it’s great to have someplace to go and a project to work on.

Since I’m going to be doing more knife-forging, I decided to empty out the 4th grade classroom, which had become a sort of dumping ground for large, awkward things. 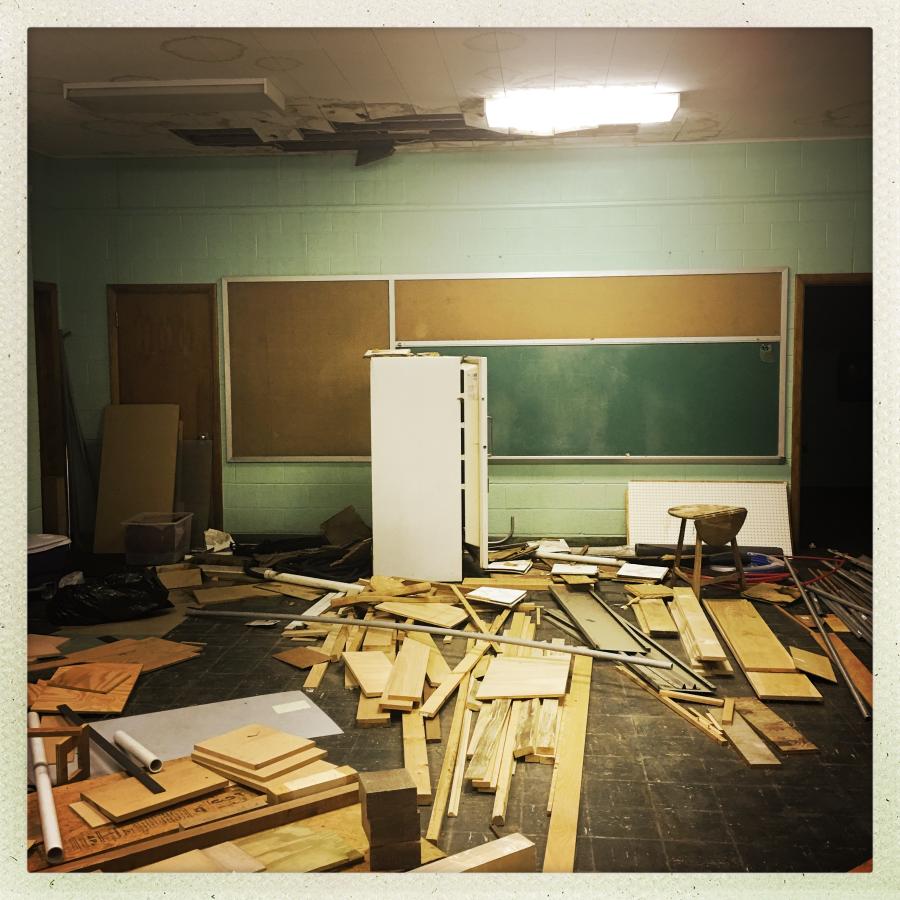 Well, it’s nice to have a flat place where you can lay out lumber scraps. And, something like a freezer chest is awkward to get rid of, and if it’s not bothering anyone, it may as well sit.

The reason I included a picture of the front hall is because the best place to put a dumpster is at the exact opposite end of the building from the 4th grade classroom. I know: “first world problems.” So I spent a very long wednesday hauling the larger stuff out to the dumpster, then sorting through the lumber to figure out what goes in the dumpster or what goes back to the farm to get stored in the horse-barn (there is a nice storage room there that is perfect for lumber) Each trip back and forth is on concrete, and I think I must have walked 10 miles and probably moved 4 tons. 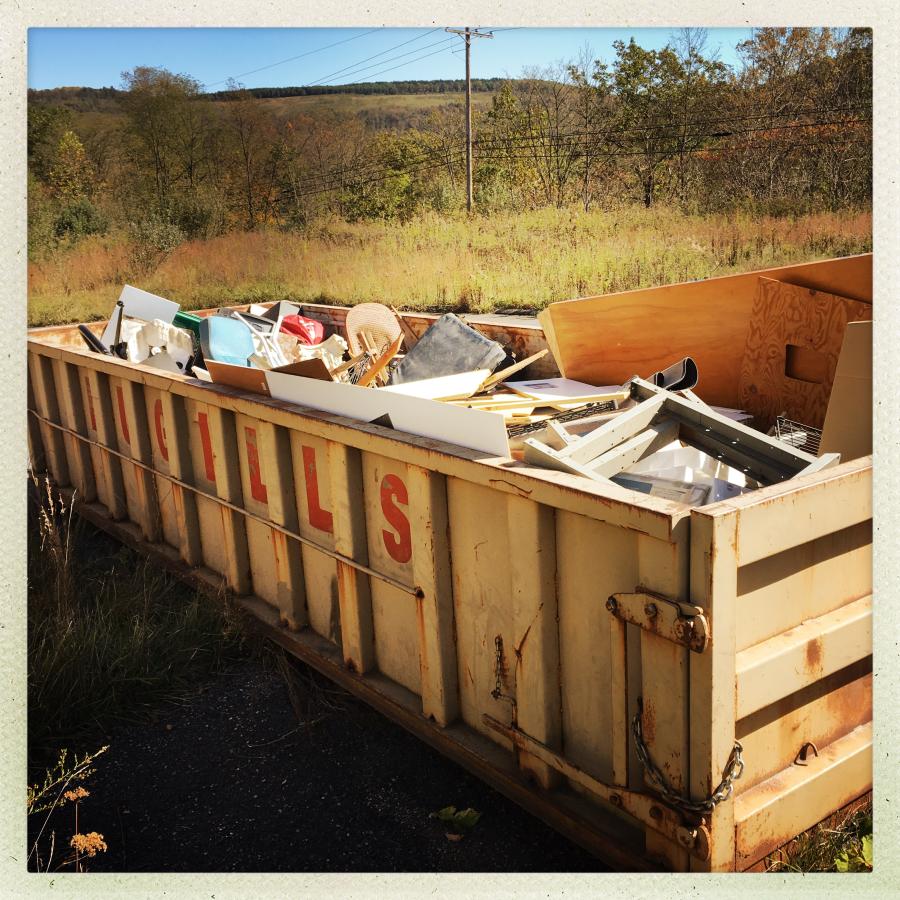 I spent a few hours on saturday moving more wood and pulling up some of the rotten floor tiles (bare concrete is fine for a metal shop!) and made a lot more trips to the dumpster. There is a decade of accumulated bizarreness in there – seats from my old Suburban (2003) and my old jeep (2006) and my step-van (2008) various stands and props I welded together – stuff like that: heavy junk. The dumpster services around here recycle construction parts so I’m pretty sure a lot of that stuff won’t go to waste.

When I renovated the 2nd grade classroom and set it up as my photography studio, I pulled down the ceiling tiles and the wooden supports they were nailed to. It is nasty, dusty, dirty work, but it makes a big difference to how to the room looks and feels, especially since I can then get up into the ceiling and re-do the electric system. The building was constructed in 1957 and the wiring is decidedly not modern. So I will probably get another dumpster in and pull down the ceiling next week. I have a cordless sawz-all that will make a dogawful mess of that in a real hurry. Then it’ll be a simple matter of cleaning up.

I’m 54, now, and my joints are starting to ache for the first couple of hours of each morning. It gets worse every year, which makes me realize, as the sages say: “getting older sucks.” I think the worst part of this whole project has been facing the decision of whether or not to do it, at all. Do I want to spend a few hundred hours setting up a nice forge-shop and use it for a decade before my joints completely give out? What if I start to fall apart even faster? I don’t want to just give up and become a hermit that plays computer games, blogs, and solves internet security problems but I am starting to get a visceral sensation of what it feels like when the signs start saying “Freeway ends, 20 miles.” I’m incredibly fortunate that I was in on the beginning of a new industry and that has positioned me to lead the kind of life I do. It was all luck.

Pedal to the metal.

As the project progresses, I will probably post pictures now and again. It may not be interesting, so I’ll keep an eye on the page-view statistics and if The Commentariat collectively is not interested my busy-work, I’ll know and I’ll stop posting them.