Artificial intelligence programmers are getting good results with self-training neural networks. That’s something I originally thought [stderr] wasn’t going to work, but I revised my opinion when Dota2 champion Dendi got beaten by a neural net that trained to play against a copy of itself. [stderr]News is that a google AI that had trained against itself, defeated some humans and previous AIs that had trained against humans. [ars]

But there are some situations where an AI can train itself: rules-based systems in which the computer can evaluate its own actions and determine if they were good ones. (Things like poker are good examples.) Now, a Google-owned AI developer has taken this approach to the game Go, in which AIs only recently became capable of consistently beating humans. Impressively, with only three days of playing against itself with no prior knowledge of the game, the new AI was able to trounce both humans and its AI-based predecessors. 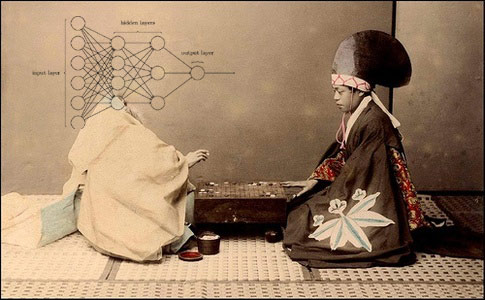 Watching the Dota2 game with Dendi, I could see that the AI’s play was similar to the human’s – it just didn’t make a single mistake and its fire control was slightly better balanced. In other words, it played like a human, but better; one of the possibilities I am wondering about is whether an AI that was not training against humans would invent its own new tactics. If it was playing against an AI that had trained against humans, and beaten them, can we expect it to play like the humans, only better?

One other thing that occurs to me, is that with an AI we have things we can measure: how many neurons are involved in the AI’s “thinking” about each move? How many cycles does it take? How much memory gets accessed? Is there a way of determining which neurons in the AI are being used to ‘remember’ games versus ‘strategizing’? Can we tell them apart? Given an AI that plays Dota2 at a superhuman level, and an AI that plays go at a superhuman level, can we make any inference about which game is ‘harder’ based on the AI’s internal computation? Would that match a human’s intuition about which game is ‘harder’? Note: I scare-quoted ‘harder’ because I have no idea what that means – perhaps ‘harder’ may come to be defined in terms of how many cycles of a certain type an AI needs to win.

The DeepMind team ran the AI against itself for three days, during which it completed nearly five million games of Go. (That’s about 0.4 seconds per move). When the training was complete, they set it up with a machine that had four tensor processing units and put Zero against one of their earlier, human-trained iterations, which was given multiple computers and a total of 48 tensor processing units. AlphaGo Zero romped, beating its opponent 100 games to none.

Tests with partially trained versions showed that Zero was able to start beating human-trained AIs in as little as a day. The DeepMind team then continued training for 40 days. By day four, it started consistently beating an earlier, human-trained version that was the first capable of beating human grandmasters. By day 25, Zero started consistently beating the most sophisticated human-trained AI. And at day 40, it beat that AI in 89 games out of 100. Obviously, any human player facing it was stomped.

So what did AlphaGo Zero’s play look like? For the openings of the games, it often started with moves that had already been identified by human masters. But in some cases, it developed distinctive variations on these. The end game is largely constrained by the board, and so the moves also resembled what a human might do. But in the middle, the AI’s moves didn’t seem to follow anything a human would recognize as a strategy; instead, it would consistently find ways to edge ahead of any opponent, even if it lost ground on some moves.

We can’t transfer assumptions between human cognition and AI cognition, so we won’t be able to dissect how the AI thinks and make inferences about how a human thinks. I wonder if AI will help us learn more about ourselves.