I only see spam when I check my email on my iPhone; my desktop and laptop have some nifty bayesian spam classifiers that are about 99% accurate. On most days I never see any spam at all. It might be fun to do a breakdown of the various forms of spam that I get, but roughly it’s about 30% erectile dysfunction, 25% political (lots of anti-Obama and anti-Hillary. Still anti-Hillary) , 20% tactical/paramilitary gear, 10% how to pick up girls, 10% hair growth, 5% brides for sale.

There’s also a lot of spam I can’t read; I get stuff in a variety of languages, from everywhere I’ve been in the world. I can’t tell if it’s from hotels I’ve stayed in, or goodness knows. I get Polish, Japanese, Chinese, a bit of Hungarian, and even some French. How do I get on all these spam lists? Most likely from grazer-bots – I’ve had my email address in a bunch of places for a long time, and every so often I get a new thread of spam from a new source and it never stops. The worst was back in the 1990s when I taught classes in spam-blocking at USENIX – some spammers retaliated by using my email as a sender, and also signed me up for a lot of stuff. My incoming spam-rate fluctuates, though. I suspect that, over years, some spammers stop and do other things, and eventually I no longer get their important messages.

I don’t assume that the spam that I get shows any kind of targeting; I’ve never donated to a political party or politician except Chase Iron Eyes, so I assume the anti-Obama and anti-Clinton stuff is just being carpet-bombed out there. Am I getting a cross-section of a form of American media? Are most Americans getting these important offers? 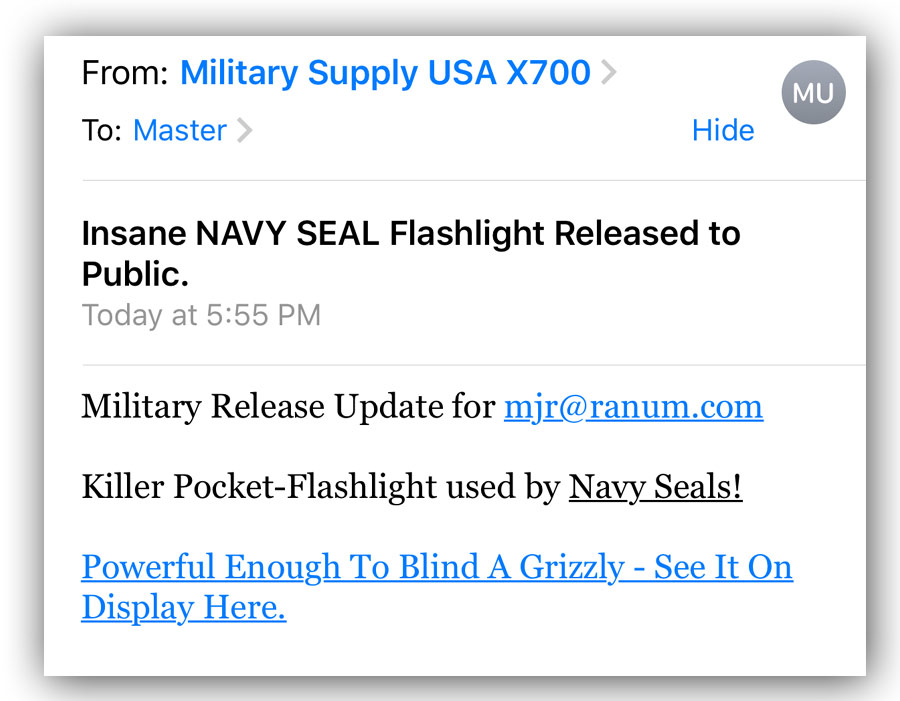 That’s really sad. Under normal circumstances, I’d never see any of this stuff. If I were going to buy it, I’d have already bought some. Because it’s free, they can be incompetent at marketing. Generally, I have a very low opinion of marketing communications. One example that particularly annoys me is United Airlines’ Visa card: I have been getting an application in the mail every month for 12 years. I am not exaggerating. The crazy part is that I actually already had a United Airlines Visa card for about 5 of those years. Occasionally I think about writing the CEO of United’s office and suggesting that they drag their marketing communications firm off the plane.

Now I am beginning to wonder whether there is an underlying demographic at play in all these spams. Check out this one: 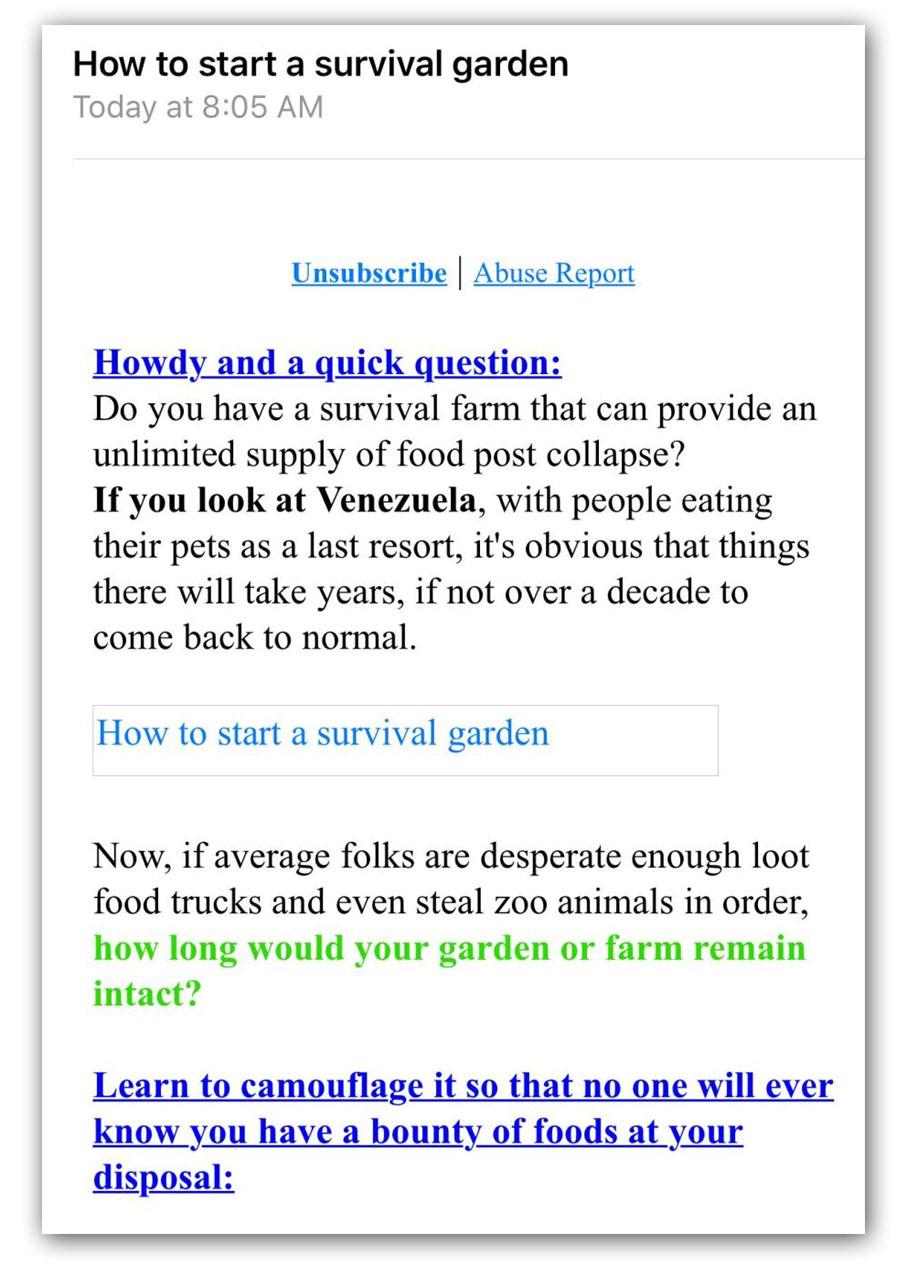 The people producing these ads are reaching toward a population of people who are afraid and uncertain about the future. The anti-Clinton and anti-Obama messages are not simple political garbage, they’re oriented toward conspiracy-level thinking. Why are they still attacking Hillary Clinton?

Jim Bakker is selling survival food (I wonder if the Puerto Ricans would choke it down?) and talking about apocalypses and conspiracies. The tactical pen and flashlight purveyors are appealing to people who appear to be prepared to believe that there will be a great big meltdown in which desperate “average folks” are wandering around trying to find food – food that the insider is smart enough to be growing in their concealed garden. When the apocalypse comes and grizzly bears are snuffling around, they can put on their sunglasses, blind the bears with their flashlights, and poke holes in them with the concealed Strike Pen.

Apocalypse planning is another axis of America’s deep ignorance-based fear-programming. Americans have been propagandized for several generations to believe that there is a threatening enemy out there – an enemy that the government can protect us from.

By the way, the “unsubscribe” links on most spam actually flag you as a live address – so you get more spam. Unless it’s a semi “responsible marketing” company like mailchimp or constantcontact, don’t use that sort of link. If you start getting spam from real companies: call the CEO’s office and tell them succinctly that you regret that now you’ll never be able to do business with them, since they’ve spammed you.

I actually have a case of Meals, Ready to Eat (MRE) in the basement – not because I’m afraid things will go horribly wrong – but because someone gave them to me. The current generation of MREs sure are better than Vietnam-era C rations. I’ve been snowed in here a couple times, once for nearly two weeks. For me, “survival rations” are Kitchens of India heat and eat curry, and rice. [amzn] The Kitchens of India is $1.70/helping, which is more than the $50/helping Jim Bakker’s garbage costs, but it’s delicious!

Augason Farms is the company that produces Bakker’s bucket-o-glarp products. I was curious as to whether or not it was, perhaps, owned by Bakker and if he was dealing from one hand to the other, but it seems to be a separate business. Although – it looks like the Auguson Farms people are pretty active in the glarp business. [auguson] Their parent company, Blue Chip Group also sells emergency preparedness stuff. [bcg] I have a mormon friend who explained that the mormons value self-sufficiency because they actually have had the US Government try to launch pogroms of eradication against them. 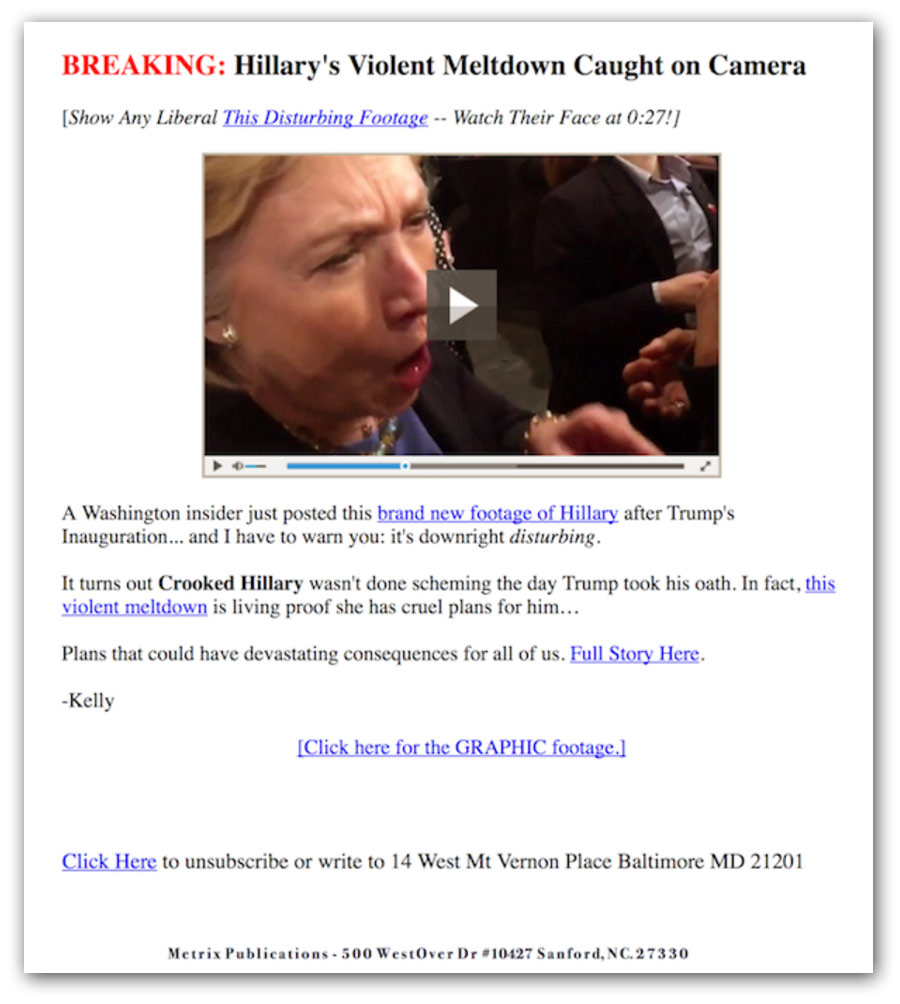 West Mt Vernon Place in Baltimore is right near the Walters Art Gallery and the Engineer’s Club – I am tempted to wander by next weekend when I’m in Baltimore – but why is Metrix Publications in Sanford, NC, telling people to write to a place in Baltimore?

Anyway, this weird anti-Hillary spam comes about once a week. Is there a substantial propaganda campaign still trying to fuel Hillary-hatred in Trump’s followers? I wonder if this is just playing to a certain demographic, or reinforcing that demographic? Probably a bit of both; it seems to be remarkably similar to the religious mind-set: there are powerful forces out to get you, you need to believe in the dear leader and his anointed ones, you need to buy our buckets of horrible food-substitute, you must wear the glare-resistant sunglasses of war, and carry the grizzly bear-blasting flashlight with the striking edge, and your pen of mortal wounding. I feel like looking at this spam is giving me a view into the demographic that was targeted by the Trump campaign and Jim Bakker. I’m extremely suspicious of the social sciences, but it’s as if someone read Altemeyer and said “Let’s use this a a blueprint.” [stderr]

Get Them While They Are Young » « More AI Self-Training Victories