This is a technique that was originally posted by Susie Bright [bright] but it evolved.

First, you take a bunch of ingredients. You can tweak the ratios of any of these without harming the overall recipe. You’ll notice I have a couple dried chipotles; I put them in, you might not want to. Or you might. This is very touchy-feeling “do as thou will’t shall be the whole of the law” kind of stuff. 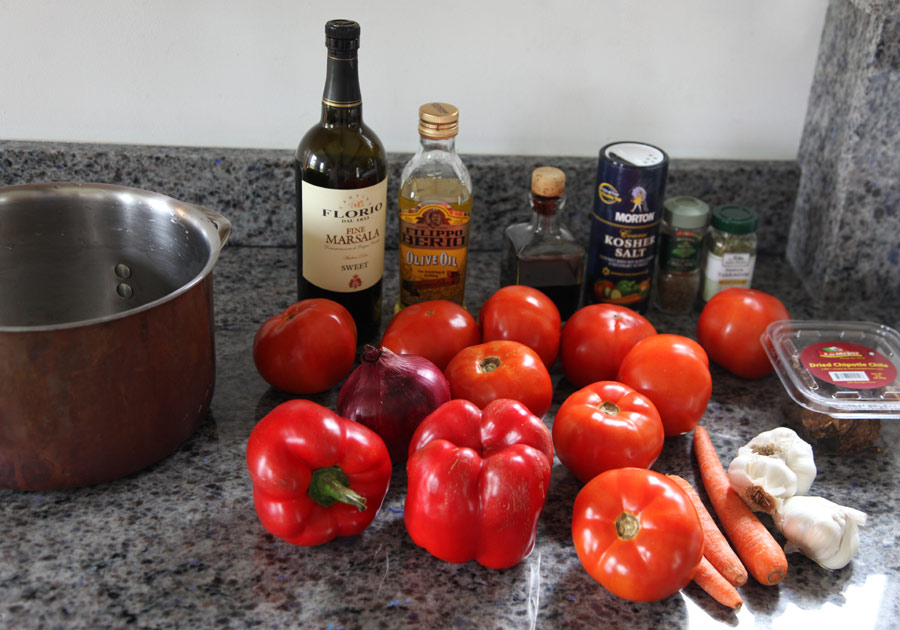 This recipe is best if you own a vacuum bagger, but if you don’t you can use ziploc bags if your clean technique is good. 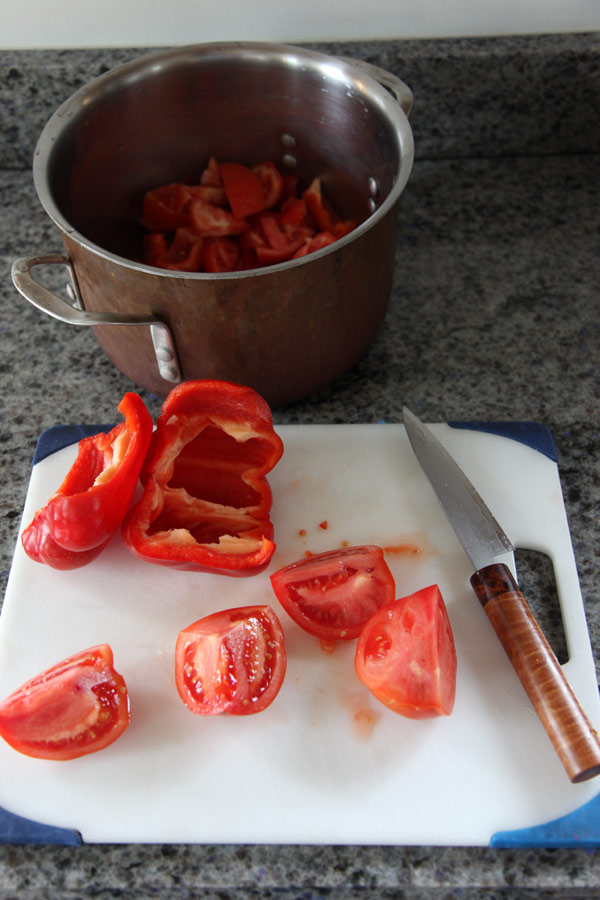 The large pot is only there as a convenient place to store things. You don’t need to cut anything to any particular size, it really doesn’t matter much. 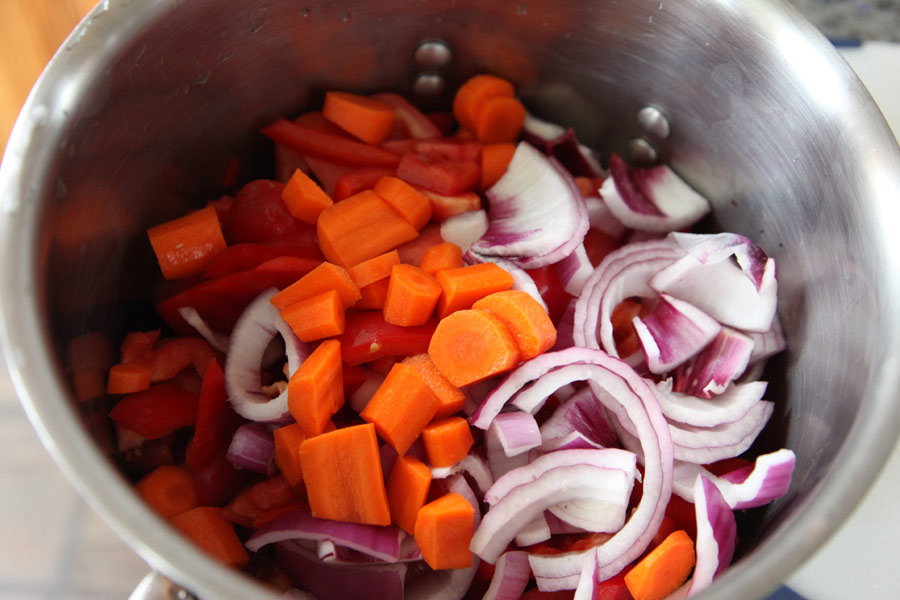 You will wind up with a pot full of ingredients! To those, you want to add salt, balsamic vinegar, and olive oil. I usually add about 1/4c of olive oil at this point, and 2tbsp of balsamic. When it’s all finished, I add more to taste. 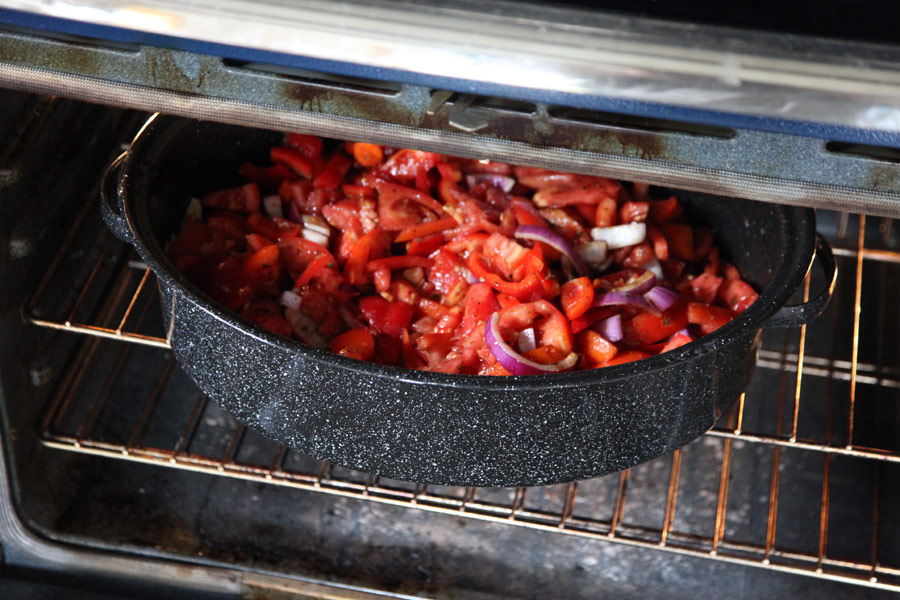 Then, it all goes into a turkey roaster or something that you can roast it in. Which goes in the oven.

Set the temperature for 250 degrees F, and forget about it for an hour or two. After an hour or two you will be unable to forget it because the smell will begin to dominate your house and you will be walking around with strings of drool hanging from your flews.

If you want to torment yourself, you can stir it every so often. But it doesn’t really matter. You’re just fooling yourself. 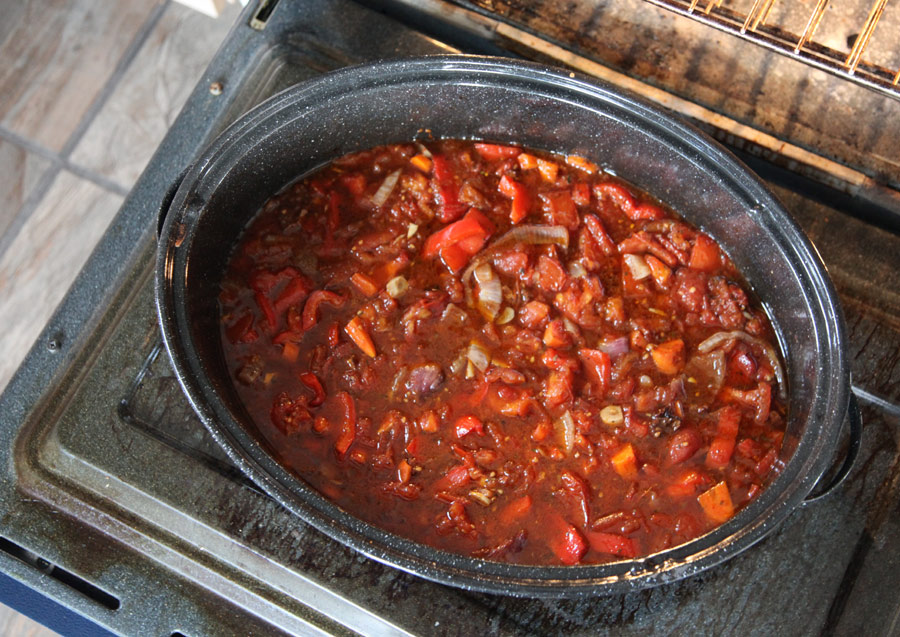 I slow-roast it down for anywhere between 2 and 5 hours. This is a great recipe for if you’ve got company and you want to do something like set it up and have it ready for when they arrive – if they’re unreliable guests and aren’t likely to show up on time. I don’t know if you have friends like that, but I used to. Now, I don’t invite people like that over, any more, which is simpler. 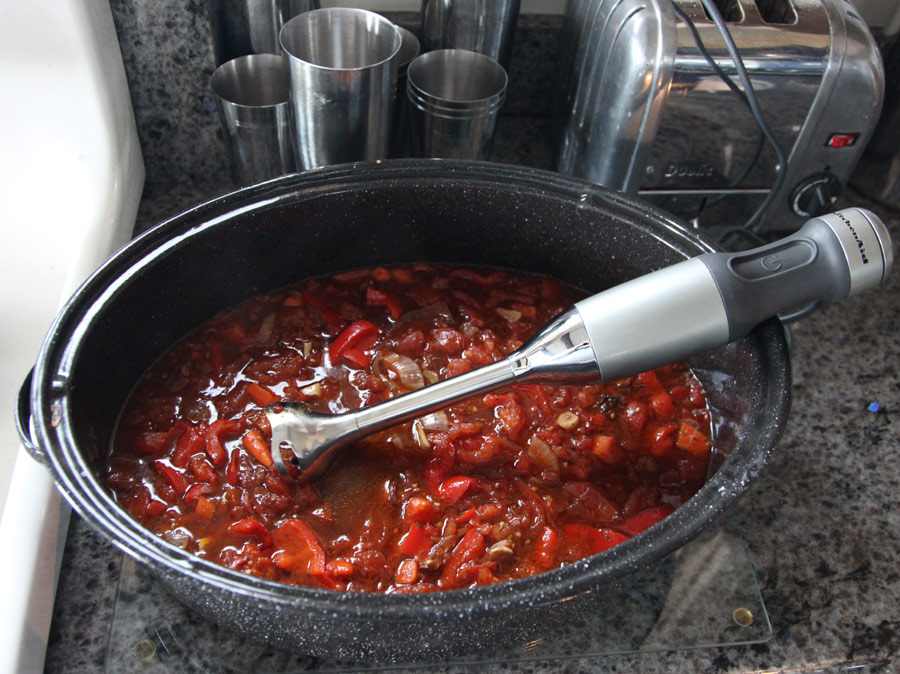 Traditionally, in my house, I yell “FETCH THE STICK-BLENDER” in a Monty Python voice. Because, our weapons are surprise. Fear and surprise. And a stick blender. Be careful with those things, they are truly scary. 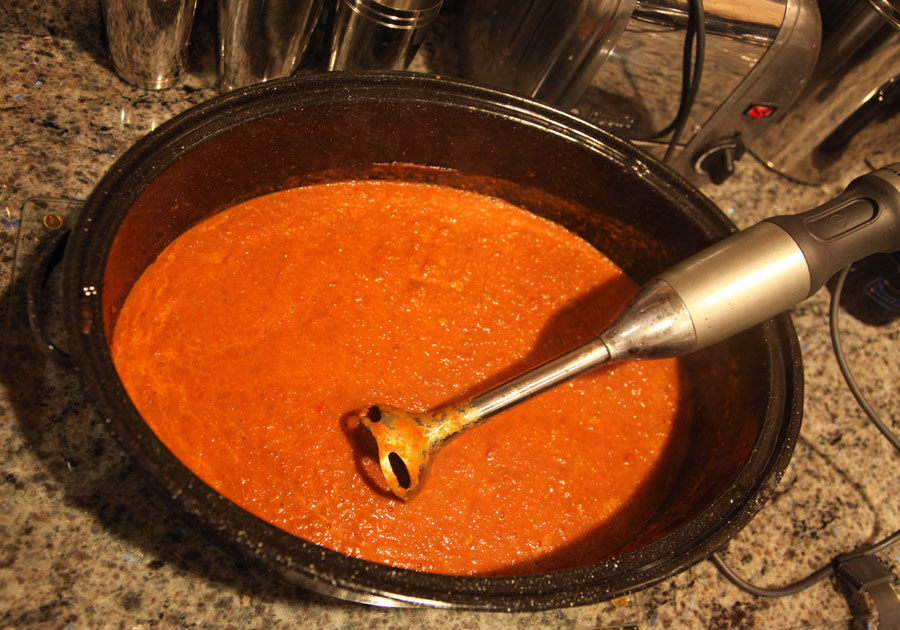 At this point, I usually ladle a bunch off into vacuum bags while it’s hot, and seal it and freeze it. I’ve had batches of this stuff keep for a year, easily.

If you’re dealing with awkward and unpredictable guests, you can spend some time preparing fresh pasta; if you flour it or hang it over a rod, it’ll keep just fine until they show up. Raviolis are good, too: just make a batch of fresh pasta dough, roll it out and either go at it the fancy way, or use a glass to cut circles, put cheesy goodness in the middle, then fold them and use a bit of egg yolk and the rim of the glass (gently) to seal them into sort of dim-sum like things. You can also do that with chanterelle mushrooms sauteed with garlic and a bit of truffle oil, or even Italian sausage you just strip out of the casing (that’s a great hack for making a quick dinner).

Finishing steps: usually I add a good “glug” of fresh olive oil at the end; its flavor isn’t cooked down. I’ve also been known to add 1/4 cup of sweet Marsala wine, or (if I am low on Marsala) whatever red wine is open at the moment. You’ll notice that I usually ladle off and store some before the finishing steps. That means, when you’re reconstituting this stuff you just toss the vacuum bag in the microwave and thaw it, then pop it into a saucepan to heat, and add the wine/oil/salt/balsamic to match the food you’re planning to put it with.

If you want to get decadently fancy, you can tip some off, add a bit of heavy cream, and then stir some vodka into it right before you pour it over the ravioli.

If you’re stuck for a panini, you can put this sauce on bread, cover it with cheese, and melt/toast it in a frying pan or oven.

More Witchery » « Well, That was Unexpected