Edward Bernays was the foremost proponent of “public relations” (which encompasses marketing, political propaganda, and other means of manipulating society) – an interesting character, who seemed almost as if he wanted to set himself up as a target for conspiracy theories.

Adam Curtis talks extensively about Bernays, in a conspiratorial tone, in his documentary The Century Of The Self. [youtube] Bernays made a great deal of money – his consulting rate was $1000/hr back in the 1970s – by creating a legend about himself, that he was a public relations genius and that he was the meta-marketer who operated at the political level. That does not seem to be completely untrue; Bernays was involved in a variety of political maneuvers, making the unpalatable seem much more tolerable than it should be, etc. I think he fired some of the opening shots in the war on authenticity – the world was already lies and damn lies, but he helped promote lying as an art-form. 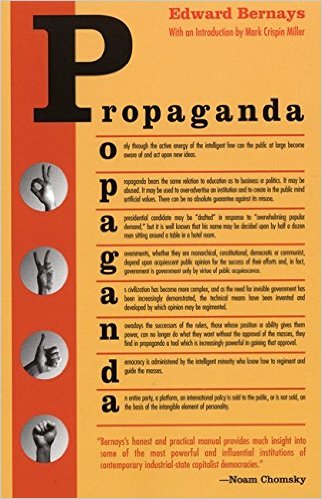 It starts off with lies and doesn’t go downhill from there – it’s as if Machiavelli wrote The Prince for a self-satisfied CEO, speaking from the role of Marketing Director. Perhaps you who know how uncomfortable I am with marketing, the profession of lying, one of a small number of inherently immoral jobs [stderr] – this was like going to the fountain-head for me. Much of what he says is probably accurate, but that doesn’t make it any less unpleasant. Bernays’ writing in this book is more condescending toward the masses than his Crystallizing Public Opinion, which I have also read; here he is not advocating the need of the new profession, he’s slyly winking to the reader about how clever they are. It opens in a few sentences that both agree with what I believe about democracy, and make me think, “you slimy bastard:”

The conscious and intelligent manipulation of the organized habits and opinions of the masses is an important element in democratic society. Those who manipulate this unseen mechanism of society constitute an invisible government which is the true ruling power of our country.

We are governed, our minds molded, our tastes formed, our ideas suggested, largely by men we have never heard of. This is a logical result of the way in which our democratic society is organized. Vast numbers of human beings must cooperate in this manner if they are to live together in a smoothly functioning society.

Our invisible governors are, in many cases, unaware of the identity of their fellow members in an inner cabinet.

They govern us by their qualities of natural leadership, their ability to supply needed ideas and by their key positions in the social structure. Whatever attitude one chooses toward this condition, it remains a fact that in almost every act of our daily lives, whether in the sphere or politics or business, in our social conduct or our ethical thinking, we are dominated by the relatively small number of persons – a trifling fraction of our one hundred and twenty million – who understand the mental processes and social patterns of the masses. It is they who pull the wires which control the public mind, who harness old social forces and contrive new ways to bind and guide the world.

This is the Nietzschean nihilist, not as a bold shatterer of beliefs, but as a pollster, campaign strategist, presidential press secretary, or creative advertiser. He demonstrates that he doesn’t believe in democracy by redefining democracy – government by the will of the people – to mean “government by the spin-doctored, easily fooled masses.” He’s not counting himself among those inner cabinet members, he’s whispering to us that we can join him in the club of those who serve the elite: the bodyguard of lies. It’s depressing to realize that he’s probably right.

In theory every citizen makes up his mind on public questions and matters of private conduct. In practice, if all men had to study for themselves the abstruse economic, political, and ethical data involved in every question, they would find it impossible to come to a conclusion without anything. We have voluntarily agreed to let an invisible government sift the data and high-spot the outstanding issue so that our field of choice shall be narrowed to practical proportions. From our leaders and the media they use to reach the public, we accept the evidence and the demarcation of issues bearing on public questions; from some ethical teacher, be it a minister, a favorite essayist, or merely prevailing opinion, we accept a standardized code of social conduct to which we conform most of the time.

Robert Paul Wolff’s arguments in defense of anarchy depend offer us a moral vision of individual autonomy; we are moral agents that make our own decisions responsibly, based on our understanding of the world around us. [stderr] His entire argument for why we should be, each of us, our own individual government of one, opposes Bernays’ sly whisper, “you think you make decisions, but you do not. You think you are autonomous, but you’ve just fallen for the marketing campaign for new Autonomy cologne by Tommy Hilfiger. You are not and were never able to make your own decisions, your decisions were made for you on Madison Avenue.”

In the days when kings were kings, Louis XIV made his modest remark “L’Etat c’est moi.” He was nearly right.

But times have changed. The steam engine, the multiple press, and the public school, that trio of the industrial revolution, have taken the power away from kings and given it to the people. The people actually gained power which the king lost. For economic power tends to draw after it political power; and the history of the industrial revolution shows how that power passed from the king and the aristocracy to the bourgeoisie. Universal suffrage and universal schooling reinforced this tendency, and at last even the bourgeoisie stood in fear of the common people. For the masses promised to become king.

Today, however, a reaction has set in. The minority has discovered a powerful help in influencing majorities. It has been found possible so to mold the mind of the masses so that they will throw their newly gained strength in the desired direction. In the present structure of society, this practice is inevitable. Whatever of social importance is done today, whether in politics, finance, manufacture, agriculture, charity, education, or other fields must be done with the help of propaganda. Propaganda is the executive arm of the invisible government. 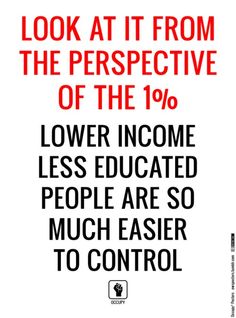 New propagandists, like Karl Rove and Steve Bannon, probably congratulate themselves on their nihilistic clarity of vision. But Bernays was ahead of them – way ahead. Bernays wrote that in 1928. It seems to me that he is referring to unionization (“the bourgeoisie stood in fear of the common people”) or perhaps communism. He died in 1995, having lived to see communism and unions out-marketed and driven off the battlefield of ideas. In one of the last chapters of the book he casts propaganda as an important and democratic part of education – to help make sure that new generations are raised to fit well into their society. Bernays’ vision was not perfectly clear, or he might have anticipated America’s invisible leaders’ brilliant response to the masses threat of becoming king: produce uneducated masses.

Bernays, like most marketers, was best at selling one thing: himself. He recounted numerous stories in which he designed public relations campaigns that resulted in profound change. Reading them, I consider them to be mostly sleazy, deceptive, and disgusting. For example, he was the mastermind of the “torches of freedom” [wikipedia] ad campaign which linked female empowerment to smoking: it opened up a gigantic new market for the tobacco industry and made vast fortunes, as well as leading many, many women to untimely death through lung cancer. In 1953, Bernays helped design the propaganda campaign that established the idea that Guatemala was on the brink of communist revolution, which led the CIA under Eisenhower to overthrow the government, keeping the price of bananas artificially low for Bernays’ client, United Fruit. In other words, Bernays’ service was always to the hand with the money in it: he was bought and sold and really didn’t care at all. He died rich and famous at 105 years of age. (1891-1995)

Bernays was Freud’s nephew and also helped usher in and popularize psychology. Curtis makes a big deal about this, citing the long-term effects of pop psychology on culture. I’m not particularly convinced by his argument, though he makes a pretty sound indictment of some of the horrible bullshit psychology was pushing in the 60s.

I believe that the United States is mostly built on bullshit – since it’s inception. So, learning about Bernays doesn’t surprise me at all. He was a great innovator in the field of bullshit, but no greater than Jefferson, Hamilton, Roosevelt, and their enablers and acolytes. Theodore Roosevelt, to name one shining example, was a “natural showman” – charismatic, affable-seeming, macho and sensitive, “peace-loving” and warlike – a prototypical politician whose firmly held beliefs always seemed to align exactly with what was convenient for him. The world has long been full of natural bullshit artists, and we allow them to fool us into promoting them over our own self-interest. They’re really the problem: Lorenzo DeMedici would have been what he was whether Machiavelli fluffed him, or not (and whoever hung the moniker “The Magnificent” on his grandfather was Bernays’ spiritual ancestor).

Bernays is occasionally an element of conspiracy theories surrounding flouridation. It was Bernays that designed the American Dental Association ad campaign to promote flouridation of water on behalf of Aluminum Company of America (Alcoa) and other special interests. To be fair, flouridation does help, but it’s also a couple of hundred million dollars a year business, in the US alone. [wikipedia]