This is the first in what will be a short series that I will try to drop over the course of the year. Because, I grew up reading National Geographic and it wasn’t until I was well into my adulthood that I discovered that I had been absorbing subtle doses of propaganda along with the cool stuff that excited and inspired me.

When I was a kid and visited my grandparents, one of the most amazing things about their house was that they had all the back issues of National Geographic. In sequence. It was a serious crime to put an issue back out of sequence, but I could take them, curl up someplace quiet, and read them. It was through National Geographic that I discovered breasts, rockets, scuba, mountain climbing, and other important things. (History came through a huge stack of Smithsonian) I hadn’t realized, at the time, how sanitized of geopolitics National Geographic was, but that’s probably because there was a great deal of fascinating other stuff to devour. 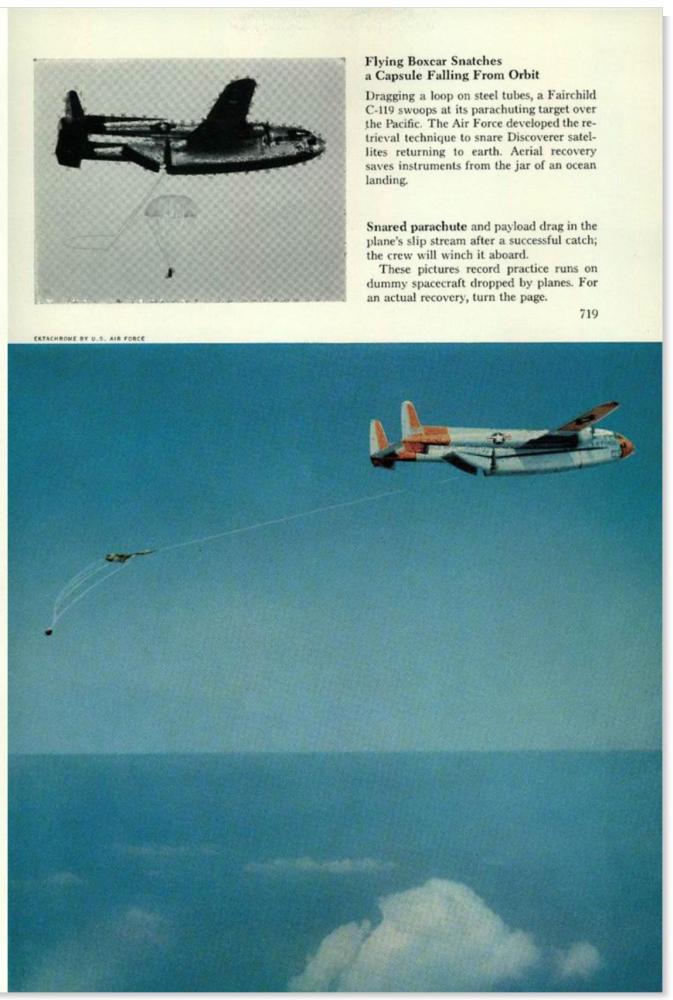 I later met someone who worked in the National Geographic publications arm, who had worked on some of the big boxed book sets, and what they did was truly a labor of love. The articles in National Geographic were huge, well-written, and – mercifully – written for adults: they were interesting and educational and exciting.

There was a lot about the run-up to the space race and the moon landings, and it wasn’t too overtly propagandistic, though it downplayed (as usual for American media) what was going on elsewhere in the world. In fairness, in the 1960s, what was going on elsewhere in the world was pretty depressing: as usual the US was dropping high explosives and chemical agents on people. But the space program was a shining beacon of sciency goodness for a kid like me. I marvelled at the piloting skill needed to catch a Discoverer satellite returning to Earth! 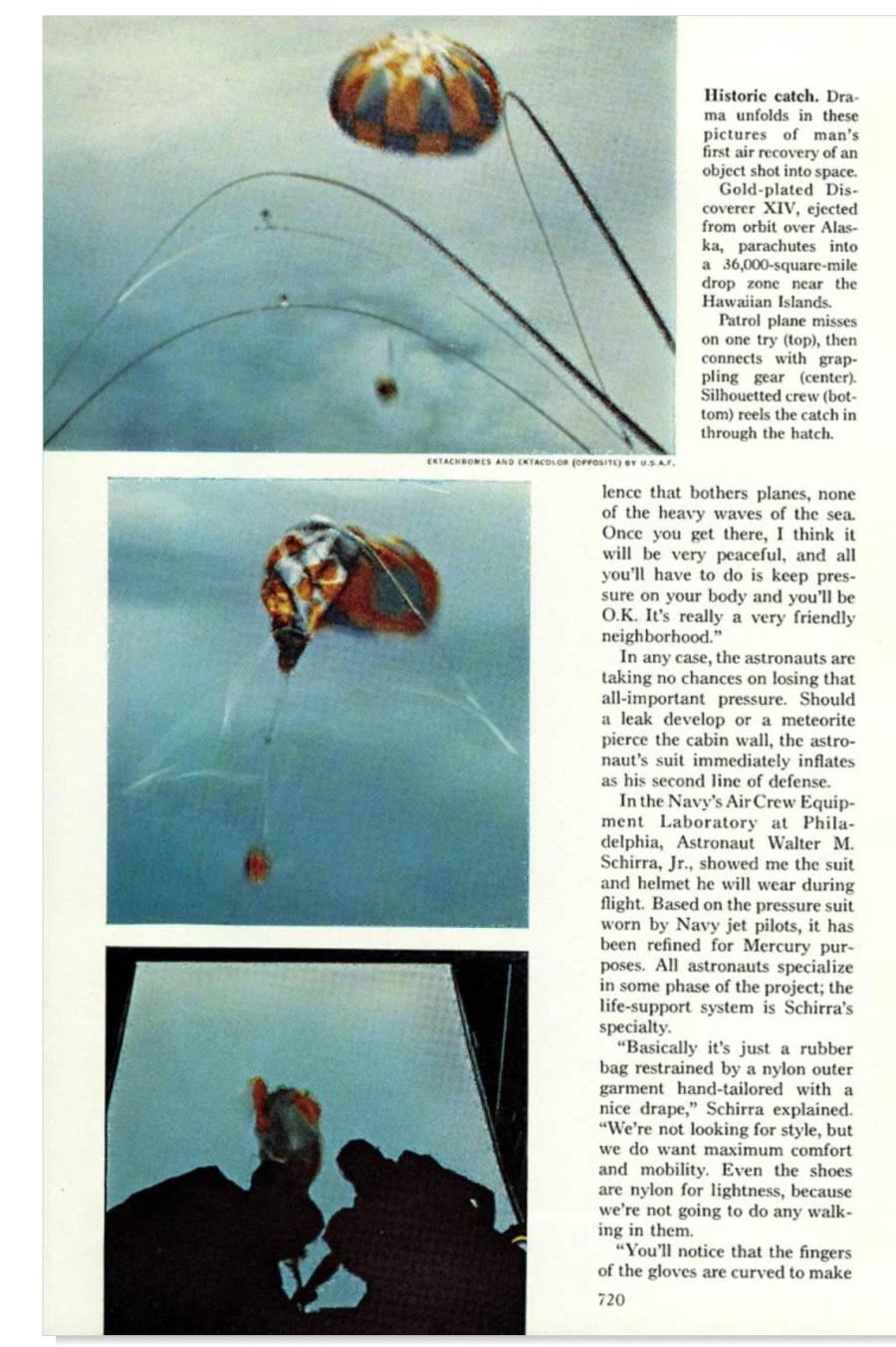 The National Geographic article is sort of a hodge-podge of spacey stuff, including pictures of Ham the chimpanzee, who also was launched into space (January, 1961) – the descriptions are all pretty sciencey. Discoverer, for example, is described as: “carried devices to gather data about space.”

It was a spy satellite. 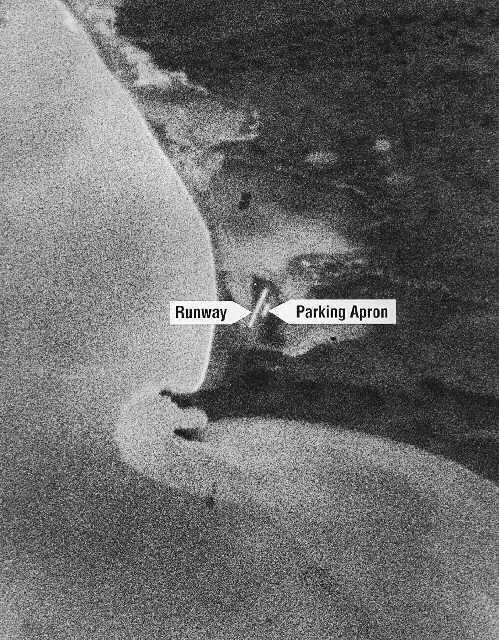 The program was named CORONA and the satellites were lofted on a Thor/Agena rocket (which had a horrible track record of simply blowing up) – the instruments were a massive reel of film that was mechanically passed by a slit-scanning lens with a rotating shutter. After a few passes over Russia, the film capsule was ejected and snagged, as shown, by CIA aircraft. It’s interesting to see how many of the launches succeeded and failed. [wikipedia] CORONA was a huge program. It was also an important program. The story goes that the Russians had been successfully bluffing how many nuclear weapons they had, and the first successful CORONA run was right over the ‘missile fields’ and photo-interpreters concluded quickly that the Russians had, basically, no missiles except maybe 2 – based on the fact that only one missile launch position had footprints of guards around it in the snow; the rest were just being used to store stuff. (Dino Brugioni drops some really interesting tidbits in his books on photographic interpretation) 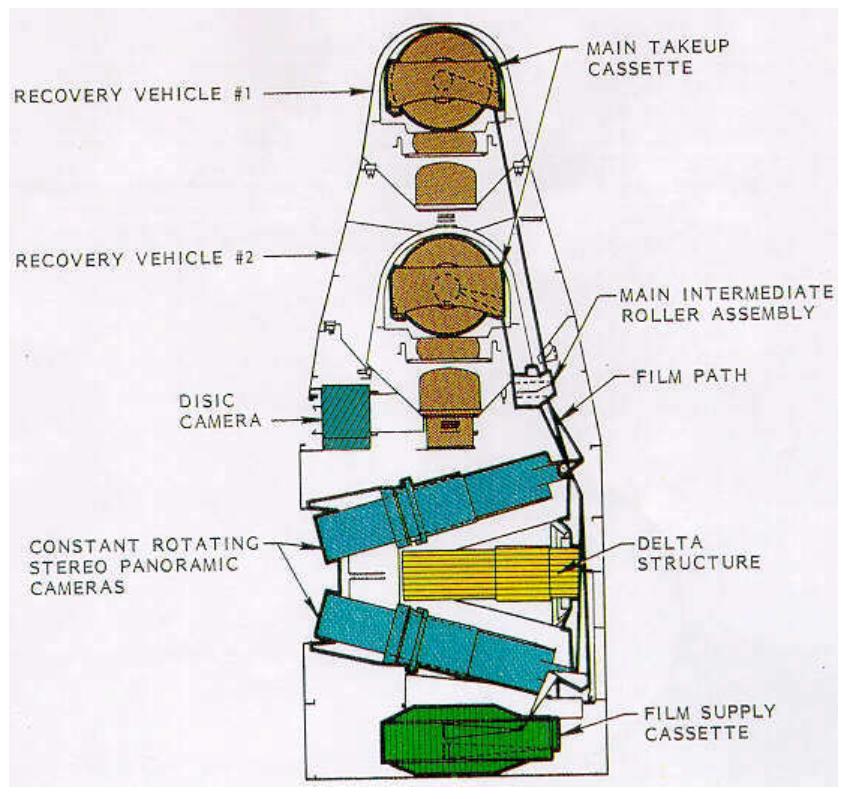 You can probably imagine my surprise when I read Curtis Peebles’ The CORONA Project – America’s First Spy Satellites [amazon]and recognized the pictures of the cameras being snagged on re-entry by the planes. I also read Dwayne Day’s Eye in The Sky [amazon]

Back in 1994 I taught a class at Kodak up in Rochester, NY, on UNIX system performance analysis and tuning (yeah, exciting!) and had a great time chatting with some of the technical people there. Even in 1994, Kodak was an ultra-dense collection of very smart technical people. When they learned that I was a bit of an amateur photographer, I got a tour around some of the research labs (amazing!) and had lunch with the people who had developed T-Max tabular grain film. They were an interesting mix of practical and theoretical – comfortable with trying to figure out how to optimize sensitivity of film grains at different wavelengths using quantum mechanics, and “just trying a lot of options.” They were happy that I was a fan of the T-Max emulsion, and when I said that I also used a lot of Technical Pan film – only, developed in Agfa Rodinal instead of Technidol (which was labelled on the bottle as “teratogenic”) one of the old guys shook his head, “that stuff really doesn’t work with anything but Technidol” It turns out he was involved in the design of that film, as well. He told me a story about how people came from California and were very “sekrit skwirrel” about that they wanted a very very very fine grain film that was balanced toward the infrared. So the people from Kodak made the film and sent it to the guys from California who said, “you can leave the anti-halation layer off, we don’t need it. And can you make it on a thinner base?” At that point, I started to laugh. Anti-halation layers are dyes in the film base that keeps light from diffusing through the film-base itself, it’s only a problem is your light is being diffused by atmosphere. I hadn’t heard about CORONA yet but I knew spy satellites existed. The guy went on, “after months they came back with a box full of crumbly powder that used to be our film. They said, ‘… and it has to be able to withstand very cold temperatures’  and I replied, ‘Yeah, and let me guess, it also has to withstand really hot temperatures.'” At the time, I didn’t understand what he was saying, but it made sense when I learned about CORONA years later. A very thin (irritating as hell to get onto a reel) polyester base called ‘Estar’ was unique to the film; I knew Technical Pan film must have been made for spy satellites, but it never occurred to me that they were dropping film from orbit.

The fourteenth CORONA mission was launched a week later [after Aug 10, 1960] and, after seventeen passes over the USSR, returned 16 pounds of film. This mission produced a cornucopia of data and gave more coverage of the USSR than all prior U-2 flights combined. For policymakers and intelligence analysts alike, it was as if an enormous floodlight had been turned on in a darkened warehouse.

CORONA photography quickly assumed the decisive role that the Enigma intercepts had in World War II. When the American government eventually reveals the full range of the reconnaissance systems developed by this nation, the public will learn of space achievements every bit as impressive as the Apollo moon landings. One program proceeded in utmost secrecy, the other on national television. One steadied the resolve of the American public; the other steadied the resolve of American presidents.

National Geographic helped give a bit of top-cover to several significant espionage operations. Maybe they were lied to. Maybe I was lied to. It’s not a huge lie; I don’t really care. What I do care about is that, thanks to CORONA, the US President knew that the “bomber gap” and “missile gap” were errors. But it was convenient to let the people believe there was a good reason for a massive defense build-out. It was CORONA intelligence that encouraged the US to station medium range missiles in Turkey (knowing exactly where to target them) and it was CORONA intelligence that spotted missile bases being built in Cuba, long before President Kennedy made a big, dramatic, counter-move, taking the world to the brink of a nuclear war that – thanks to CORONA – the US was pretty sure it could win, but it didn’t want to risk paying the cost of a few cities.

Slowly, over years of learning about the intelligence community and some of the things it has done, I came to conclude that one of the greatest dangers to humanity is differential knowledge. If one side thinks they know something that the other doesn’t, they may think it’s safer to start a war. And, they will. Because, in general, we persist in putting the power-hungry and egomaniacal in positions of authority over great and terrible war-making forces.

By the way, for a low price – under $30 – you can have access to all of National Geographic back issues. Get the digital/paper membership and you can read them until your eyes bleed with joy, just like I did when I was a kid. Awwww, who am I fooling? When I read this stuff I am a kid again. PS – it’s searchable – otherwise I’d have had to re-read the whole thing in order to do this article for you, which would have bothered me not a whole lot except for the part where I vanished for a month. This is the article, in case you want to find it: [natgeo]

Edwin ‘Din’ Land, the inventor of the Polaroid Camera, was a consultant on the optical systems of the CORONA, as well as on the film (predictably, Land initially wanted the satellite to develop the film in space)  Many of my early technical heroes such as Harold ‘Doc’ Edgerton were involved in a lot of sekrit skwirrel stuff during the cold war and before. All those early photos of nuclear explosions? Doc did them.

The CORONA satellites were known as KEYHOLE 1-5. KEYHOLE became the name for the US’ line of spy satellites, up to the KH-11/Kennen, which (if you look at a picture of it, and the Hubble Space Telescope – they’re Arkansas cousins [similar]) was partly responsible for the invention of digital photography. The current generation of spy satellites are no doubt impressive but appear to have become so expensive and complicated that there aren’t very many of them – a typical trend in American systems procurement. 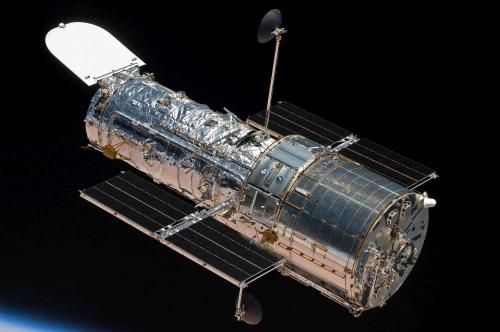 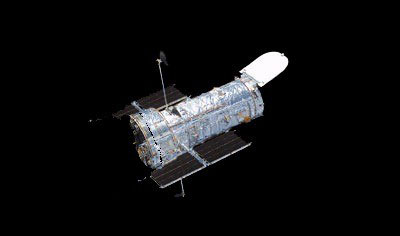 The CORONA books have some pretty cool pictures in them, including one of my favorites, which is the pieces of a CORONA that were returned to Lockheed after a failed launch. “Here’s your satellite.”

One of these is a KH-11, the other is the Hubble Space Telescope. Or should I say: Both of these are KH-11s, one points up one points down and has a shorter focal depth.