I loathe the way the media soft-peddle their service to the state.

If someone keeps demanding something, and insistently renews their demands (coupling them with threats) if you don’t give in – that’s not a “debate.” Reuters’ title should have read:

But Reuters can’t be honest because, reasons, so they have to downplay the fact that the police are taking advantage of a tragedy to push a domestic surveillance agenda:

However, they have yet to spell out clearly whether the government wants them to weaken encrypted services such as WhatsApp or are simply asking for ways to gain access to phones in their possession to recover suspects’ communications.

Khalid Masood’s actions were not dependent on his use of WhatsApp. British police would have done nothing different to prevent the attacks if they had been able to read his WhatsApp traffic. And, now that the attack is over, they aren’t going to be able to do anything different even if they could access his WhatsApp traffic. For one thing: he isn’t using WhatsApp anymore. For another: they already had investigated him based on his criminal record and social media, and decided not to do anything about him. In other words: “That data we had that didn’t serve any useful purpose? We want more of it.” That’s the generous interpretation.

A less generous interpretation (the one I hold) is that the British secret police are thinking “Let’s not let a perfectly good tragedy go to waste! Time to push for more access!” This is just after last November’s passage of the UK Investigative Powers Bill[verge] – it’s not good enough, apparently, that they already require carriers and providers to track users’ browsing history, app usage, and more – and to make it available to law enforcement that promise, with sincere sincerity, that they won’t do anything with it.

The significance of November’s bill is that the UK basically did what the Bush administration did when it was caught illegally spying on citizens communications in collusion with AT&T: they retroactively made it legal, patted everyone on the back, and carried right on with what they were doing. Then, having gotten away with that, they started collecting more. When Snowden disclosed that, they made that legal, too.

This is just the UK catching up – having discovered from watching the Americans, “Oh, we can get away with that?! Bloody right! We’ll do it too!” 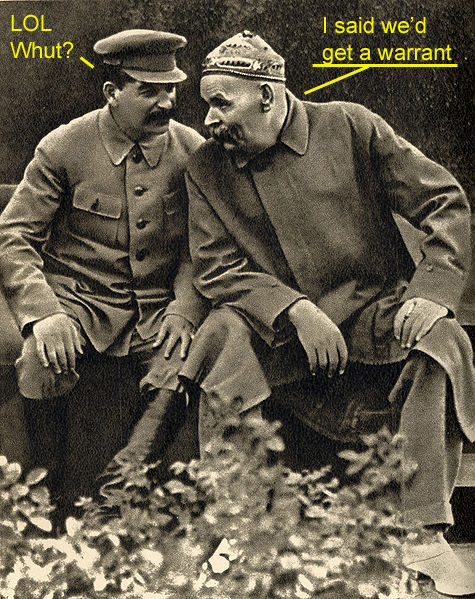 The British are even telling themselves the same lies the Americans told themselves, and accepted: there will be controls on the data, there will be processes, and warrants. Those were the controls Obama threw out the window as he left office. And the British are too mesmerized by the slowly unfolding tragedy of ‘brexit’ to notice what the intelligence services have been up to. Because, like in the US, the whole “warrant” rigamarole is a fig-leaf that maintains the appearance of rule of law – remember, in the US, not only did the FISA court never turn down a request, the NSA ignored them anyway – the FISA court was just for agencies the NSA wanted to make jump through hoops. And now we learn that the CIA made its own parallel capability because they could and it was easier than asking permission.

The police watchdog is investigating allegations that a secretive Scotland Yard unit used hackers to illegally access the private emails of hundreds of political campaigners and journalists.[guardian]

Hacked passwords were passed to the Metropolitan police unit, according to the writer of the letter, which then regularly checked the emails of the campaigners and the media to gather information. The letter to Jones listed the passwords of environmental campaigners, four of whom were from Greenpeace. Several confirmed they matched the ones they had used to open their emails.

The letter said: “For a number of years the unit had been illegally accessing the email accounts of activists. This has largely been accomplished because of the contact that one of the officers had developed with counterparts in India who in turn were using hackers to obtain email passwords.”

The end-goal of the secret police is to be able to read all devices, all messages, all accesses, and all activity. They wait until there is a plausible catastrophe and “reopen the privacy debate”

When 9/11 happened, the US government immediately rushed out the PATRIOT Act, which was 900 pages of legislation allegedly produced in a matter of weeks. That’s complete lies: they have this stuff sitting on a shelf somewhere with a sign reading “in case of disaster, push this legislation” – that’s how it’s been going on since CALEA (Communications Assistance for Law Enforcement Act) in 1993 – based on the World Trade Center bombing. Some totalitarian asshole down in the bowels of some government building hopped out of his chair and did a little waddle-dance when Khalid Masood immolated himself and 4 other human beings: “Now I’ll be able to get more access legislated!”

“You can have a system whereby they can build it so we can have access to it when it is absolutely necessary,” Rudd said. “But I want to draw a very clear distinction here – I support end-to-end encryption as part of cyber security, for families, for banking, for businesses,” she said.

You can have what we let you have. No more. And unless you’re rich and poweful, not even that.