It’s hunting season up here in Pennsylvania. Usually that means hordes of brutal dipshits wandering around with guns, looking for a place to park and shoot something. Sometimes we get Serious Hunters from Maryland or Virginia, who come up and rent a cabin for a couple of days of serious serious stuff killing. I know they’re serious because I sometimes talk to them, and they find it important for me to understand that they are not stereotypically sitting around their cabins drinking beer, shooting eachother accidentally, and telling jokes about girl cooties and how brutally their wives treat them.

Hunting season opened monday. Many Pennsylvanian male-parents take their male-children out of school for the day so they can do toxic masculinity rituals of making a hole in a deer and revelling in the blood and death. In the past I’ve had to chase gun-toting (and grumpy) hunters off my property – which is always a bit nerve-wracking since it involves turning your back on a bunch of pissed off blood-thirsty dipshits who came to kill something, and you’ve just told them their special day has been irretrievably ruined. If they pack up and go somewhere else, they’ll miss their perfect time and place yadda yadda waah waah waah.  Some years I’ve had comments thrown at my back like: “You’re a candidate for a hunting accident.”  It’s hard to remain peace-loving when someone says something like that, but they’re the one with the rifle ready.

This year and last year, I patrol the property at dawn and dusk using my DJI Phantom 3. For one thing, it’s a semi-disposable flying table-saw (4 carbon fiber propellers spinning at 2000 RPM will chop meat quite nicely) it also rousts the deer and puts them on alert. And the 4K camera records colors beautifully; those orange suits are really visible. When hunters hear the drone they usually look around, so I fly closer, then they leave. I usually make a point of flying right down onto the deck behind their vehicles (if they drove in to my property) and pointing the camera at their license plate. I suppose someday a hunter may take a shot at the drone, but better it than me.

Besides, there’s a felony dollar level of malicious property damage right around what a drone costs. Some hunter might get more than they bargain for. But, generally, it’s nearly impossible to get a game warden to do anything about poachers. First, they say “your land wasn’t properly posted” (I know! The hunters tear down POSTED signs so they can say “the land wasn’t properly posted.”) and then, well, it’s really hard to identify anyone unless you got their hunting license number. You know, you’re supposed to walk up to a pissed off gun-toting dipshit and ask for their license number. The state police won’t do anything either. I called them once and said “there’s an angry hunter with a gun under my bedroom window cussing at me waving a rifle.”   Well, they certainly didn’t want to show up for that. The problem is that the sympathies are with the hunters: it’s a great big society of hunters and ATVers out here – there are 1.5 times as many ATVs registered in Clearfield County than there are people. And a lot of ATVs aren’t registered… So when you call the state police and ask them to enforce your property rights, you will – I kid you not – get answers like “we’re really busy right now.” I’ve snapped back at dispatchers and apologized for not scheduling my armed intruders better and, oh, what’s your badge number? (dialtone) 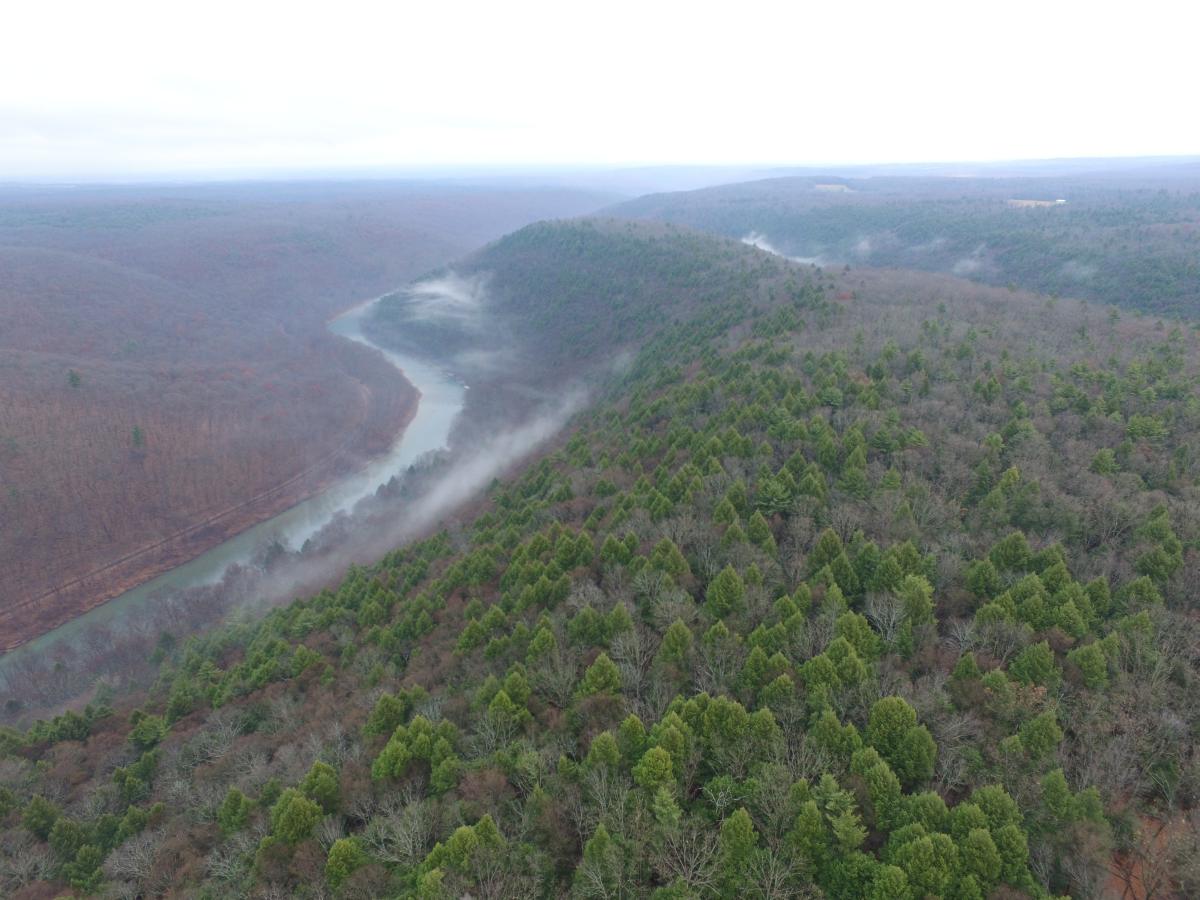 Meanwhile, I get some great views of Pennsylvania early winter. That’s the west branch of the Susquehanna. The big power plant at Shawville is back up to the left (out of sight) but I know the tops of the stacks would be visible from that altitude; it’s about 10 miles away. The railroad tracks along the far side of the river are where the coal trains used to run to Shawville from where they were stripping the mountain-top at Pottersdale. Someday maybe I’ll take the drone out to one of the strip mines and do some aerials from there.

If you follow that point all the way out, there’s a really beautiful view and it’s a very peaceful trail. The woods are full of trails – hunters, ATVs, deer; I used to go on horseback before I decided horses were too dangerous a form of transportation. One time, P-nut (my big bay bonehead) took me on a bit of a spook through the woods and we got turned around and wound up all the way out at the point, and unsure of how to get back. So I made him retrace his tracks, literally, looking for hoofprints as it got dark. In other words, my revenge on him was delicious – he thought that by scaring primate-boy he’d be able to go back to lounging in his field – instead he wound up on a 10 mile hike with primate-boy on his back the whole time.

Of course nobody in their right mind goes in the woods at all, for any reason except hunting, during hunting season. The dipshits in orange are totally in control of the landscape and you’re taking your life into your hands if you go out there. So, all in all, it’s just a cost of living up here. It’s beautiful, but the beauty comes with a price. I mostly feel bad for the other residents: they have a lousy economy, poisoned air and water, and they’ve been hoodwinked into blaming progressives and immigrants for their problems, not the capitalists who raped the area and shut down industry to increase profit margins. Some of those hunters probably do need the meat for food. They probably bought the line that it was Obama who was anti-coal and that’s why there’s no money – not that big energy companies’ trading systems have gotten so efficient that they can’t squeeze any more profit out of the antiquated power plants in the area, and there’s no money in clean power, up here. About 40 miles south, around Altoona, there are a few big wind-farms up on the ridges. Apparently the folks who set the wind-farms up had to deal with the usual lawsuits and death-threats because, yeah, you got it – the windmills were going to ruin hunting.