I’m not surprised when someone who is 80 dies. But it’s the end of a universe of memories and experiences. Tepper was a big influence on me, and I’m adding “The Gate To Women’s Country” to my recommended reading list. (News on Locus Magazine) 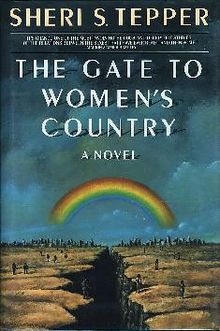 Her book “Grass” has been billed as “science fiction horror” and is probably a better book than “The Gate To Women’s Country” – when I read it, I was in the middle of training my own great big percheron/suffolk poopoo head (a technical name for a certain type of horse) I immediately recommended it to some of the dressage club that used to hang out at the barn where P-nut lived at that time. The responses were … mixed. But most of the dressageites stopped talking to me after that.* Tepper’s turning equines into creatures of horror mirrored my horror at the time. She asks “who is really riding whom?” and the answer is unsettling. When I read Charles Stross’ “Equoid” I had flashbacks to “Grass.”

“The Gate To Women’s Country” came into my mind at a time when I was watching a lot of David Attenborough biology shows – I realized that one side of humanity, at least, is now able to decisively and permanently win the battle of the sexes – like termites and wasps have done. Tepper was directly involved in humanity’s battle of the sexes, working as Director of Rocky Mountain Planned Parenthood; I must surmise that her involvement there (1962-1986) had some impact on “The Gate To Women’s Country” (1988)

When I wrote my piece on “Testicles in Space” I have to admit “The Gate …” was kicking me in the subconscious the whole time. Men aren’t needed. Ant queens (Wasps) and termite queens figured that out long long ago.

(*I used to lie out in the field with P-nut, using his chest as a sort of couch, reading together. We dug it. He learned not to try to groom me, and picked up an adorable trick of pointing his nose at horse-flies he wanted the primate to kill with its clever paws. We used to jog down to the river together with gatorade and soap and have summer sudsdays. And the dressageites would always ask me if I’d taken a fall when we came walking back to the barn covered in mud with big grins on our faces. That was how I discovered that going on walks with horses can be way more fun than riding them. Safer, too.)