I frequently use fencing terms in Argument Clinic. That’s because fencing has a lot of

the same properties as a battle of words. There are a lot of useful words from the school of the rhetoricians, but I would feel weird saying, “nice anadiplosis.” Because my opponent might reply, “gesundheit!”

If you don’t want to use fencing vocabulary, that’s fine; the words are simply handles for concepts and the concepts are what matters. 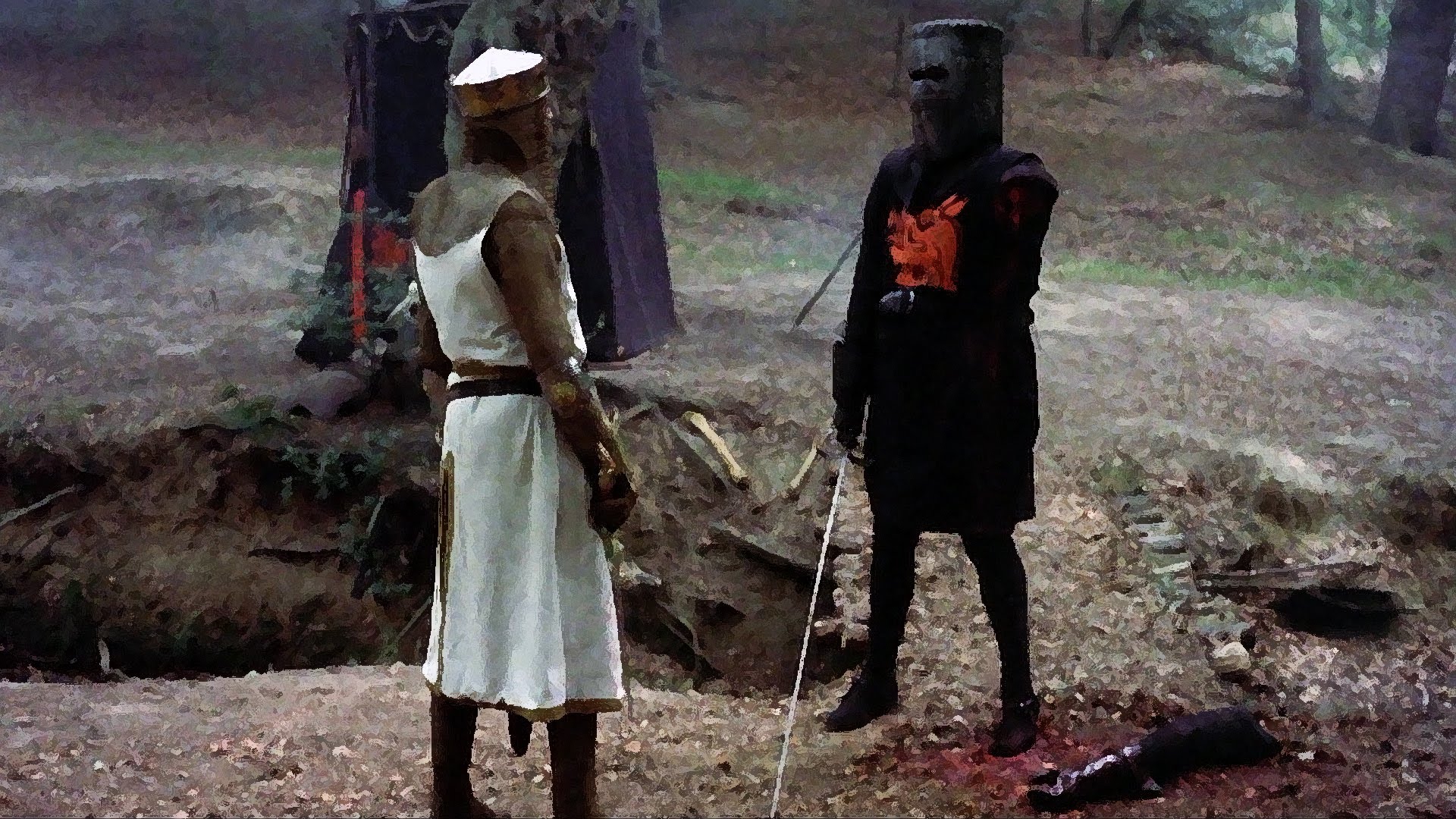 ‘Tis but a scratch!

Attack: An attempt to score a point off the opponent. In argument clinic, an attack is pretty much the same thing, except there’s not necessarily a win after you score 3 points. In fact, your opponent can very easily “Black Knight” you by refusing to admit defeat.*

Parry: When an attack is deflected or blocked. In argument that equates to offering reasons why the attack doesn’t succeed. There are a lot of parries, including: “that doesn’t apply, because [reasons]”, “that is wrong because [reasons]”, “you forgot [reason]”  In argument clinic, parries revolve around finding reasons why what your opponent said in their attack is incorrect.

Dodge: When the defender tactically retreats or shifts position so that the attack misses. In argument clinic this might be: changing the subject, saying “that doesn’t apply”[without giving reasons] or deliberately ignoring your opponent’s attack.

Remise: When an attack is parried or dodged, the attacker continues and adjusts their aim and continues the attack. In French, “remise” (re – mettre) is “re place” So you can think “redirect” “resume” or “re-engage”. In argument clinic it would be when you keep a line of argument going even after your opponent thinks they have deflected it. “IF I may continue my earlier line of enquiry…”

Counter-attack: Attacking your attacker’s attack, in their timing. This is often thought of as waiting for your opponent to make a mistake** but it may be that the defender, now counter-attacker, is taking advantage of the opponents’ placing themselves in a certain position as a result of their attack. This is the quintessential military maneuver beyond the basic attack/defend; it’s when you begin to incorporate your opponents’ maneuverings into your own. In an argument, a counter-attack might manifest itself as attacking your opponent’s points in a way designed to destroy the structure of their entire argument.

Riposte: When a parry evolves into a counter-attack. In fencing, you would move your blade in order to parry an attacker’s blade, then keep the blade moving and attack the attacker, who must then (presumably) defend.  One of the reasons I think fencing is similar to argument clinic is because in some versions of sport-fencing you are not allowed to score unless you parry your opponent’s attack; in other words the game’s rules include “repartee” into the dialogue of the blades. 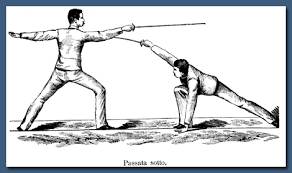 Sometimes an attacker leaves an opening as they attack, and the defender places their point such that the attacker runs onto it. In terms of argument clinic, this would be where your opponent says something that leaves them open and you interrupt (if possible!) and drop a counter-attack that interrupts their attack. For example, you are arguing with a theist who starts winding up an attack and says, “god is infinite love, therefore…” at which point you might stop-thrust by asking “Are you sure you understand how infinity works? But oh please, continue.”  A stop-thrust leaves you a bookmark that you can rewind to in the process of parrying their attack or as part of your riposte.

Feint Attack: Sometimes you want to draw your opponent’s parry, so you can attack around it. That was the brilliance of the Monty Python argument clinic sketch. As the one character attempts to “go meta” with a feint attack:

Player 1: “Look, your automatic gainsaying of whever I say isn’t an argument.”
Player 2: “Yes it is.”

The reason the Python sketch is so brilliant is because they actually are having an argument; it’s just a pointless one. Which is sort of the point: if you walk in and say you want a 5 minute argument, you can hardly have much of a point to begin with, no matter how well-structured the results are.

Timing Attack: When your opponent has gotten familiar with your rythm you attack off-rythm and take them by surprise. In debate this is a tactic that is fairly popular in informal settings: one player may simply interrupt the other constantly. See, for example, the 2016 republican party debates. In debate, timing attacks must be used very carefully, or the argument devolves to two people trying to shout over eachother.

Regardless what terminology you want to use, it helps to break apart the elements of an argument and see what’s going on, back and forth. You can analyze everything from a lecture (a series of attacks that the defender simply takes) to a formal debate which looks more like a fencing match with foils: a careful back and forth with points scored under the eyes of the judges. Thinking about who is taking the initiative and how, will help you understand what your opponents’ maneuvers are likely to be. Strategically, you always want to be thinking about how to conclude the engagement – unlike in a fencing bout the referee is not going to step in and declare a winner; you need to orient yourself toward a strategy that you have defined as “success” – whether that means understanding eachother better, airing grievances, or leaving your opponents’ reasoning a smoking wasteland of shattered ideas.

A “gish gallop” would be a flurry of attacks, hoping that one or more would get through, and the target would be overwhelmed trying to parry them all (or even most of them) successfully.

(* Variations of “Black Knighting” in argument clinic look like linguistic nihilism, post-modernism, cultural relativism, or aesthetic argument. “Aesthetic argument” is my own inner vocabulary for a strategy in which one’s arguments are rooted on aesthetics rather than anything objectively debatable. E.g.: “I do what I do because it’s what I find beautiful.”)

(** Gordon Dickson’s “Tactics of Mistake” is a pretty cool sci-fi novel around this theme. The protagonist uses a technique in which he parries his opponent’s attacks successively to pull his opponent so far out of line that they walk into his point.)