This clinic is going to be a bit less prescriptive and more theoretical.

We are going to look at a powerful technique for pulling your opponent into a discussion-ending quagmire; it’s the rhetorical equivalent of sneaking off the battlefield under cover of darkness.

To begin with: I am not aware of a term of art for this technique, and I’ve always thought of it as “linguistic nihilism.” Let’s backfill on nihilism: it’s a philosophical position of extreme skepticism that withholds judgement on the reality of pretty much everything. There are sub-versions of nihilism, e.g.: moral nihilism, which say “I am unconvinced that there is a coherent objective morality, therefore I prefer to reject your use of moral language because you don’t appear to know what you’re talking about.” It’s sort of a doomsday device in philosophical debate because it amounts to denying your opponent has anything worth listening to (more precisely: your opponent has failed to convince you of anything) and therefore they cannot possibly win.

Linguistic nihilism is a version of nihilism I don’t see used very much, but it’s a very effective way of making your opponent spend a while chasing their own tail. Here’s how it works: you erode your opponent’s ability to use language by destroying your shared vocabulary with nihilistic skepticism. It depends on the limited sizes of vocabularies that are available to us – if I can exhaust your vocabulary resources then what can you talk about? 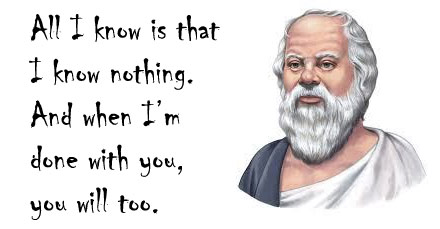 understanding of what they thought they were talking about, then building up his own version of the word being examined, and parasitizing his opponent’s position. I think it’s a cheap trick, to be completely frank, but it’s going kind of far out on a limb to accuse Plato of debating in bad faith.

Socrates: And what is piety, and what is impiety?

Socrates: […] But just at present I would rather hear from you a more precise answer, which you have not as yet given, my friend, to the question, What is “piety”?

Socrates: (attacks “noble” and “just” and “good” in detail, destroying Euthyphro’s ability to use them as components in his definition of ‘piety’)

Euthyphro: I really do not know, Socrates, how to express what I mean. For somehow or other our arguments, on whatever ground we rest them, seem to turn round and walk away from us.

Another form of linguistic nihilism, my favorite, is to realize that pretty much all definitions are circular. It’s really part of the nature of language – we use words as labels to classify groups of things, and if I need to convey a new word to you, then you need words to do it, ad infinitum. Sextus Empiricus, who formalized the hypotyposes (methods of argument) of Pyrronian skepticism, alluded to this as a generalized attack on epistemology (trope #4: by challenging someone’s source of knowledge, you can always dissect their response by challenging the epistemology of their response as well, in infinite regress). The definition of “nihilism” I gave above can serve as an example:

It’s a philosophical position of extreme skepticism that withholds judgement on the reality of pretty much everything.

Q: Well, what do you mean by “pretty much everything?” Marcus? And what is “Extreme skepticism”?

A: Extreme skepticism is a form of argument which begins without assuming the truth of anything; a person making a claim of fact is challenged to support that claim. This often turns out to be remarkably difficult.

Q: What do you mean by “truth” in that context?

Weaponized dialectic is a good smoke-screen for covering your retreat, but it pretty much ensures that a debate is dead as soon as the silo doors roll back and one party or the other begins deploying it.

Let’s assume you’re an intellectually honest person who’s arguing in good faith: you won’t use this technique and, if you ask for a definition, you’re genuinely seeking to understand your opponent.

If you’re on the receiving end of a linguistic nihilist first-strike, your strategies are already constrained:

Going meta- will sound something like this: “Aha, I see you’re attacking our ability to share a common vocabulary. That’s a pretty effective rhetorical trick but it’s a conversation-killer. Do you want to stop now? Can I assume you’re adopting sophism because you’ve run out of worthwhile things to say?”

Out-nihilisting your opponent could be a sarcastic Clintonism like “It depends what you mean by ‘is’ in that question.” (pause) “stop bullshitting around.” Or you can stake out a threatening position on their flank by indicating that your familiarity with Sextus Empiricus is deeper than theirs: “Oh, it appears to me now that I am debating with a pyrrhonian skeptic of language. How adorable! Do you realize that if you adopt an extreme skeptical pose you’ll just refute every statement of fact you’ve made so far in this discussion?”

The table-flip is to say, simply, “Ah, skeptical nihilism. So you’re not interested in arguing in good faith; does this mean you’re done or do you want to waste more of our time?”

I’m hard-pressed to think of a good faith way to go nihilist on your opponent; think of it only as a smokescreen for a retreat from battle, and expect your opponent (if they are sophisticated) to poke at you for arguing in bad faith as you scuttle back under your rock.

Aside: My understanding of this is largely informed by reading Popkin’s “History of Skepticism from Savanarola to Bayle” which I highly recommend. (i.e.: it is covered under my recommended reading program) Popkin’s history traces how extreme skepticism came into ‘Western’ thought from ancient Greek sources via Sextus Empiricus and was weaponized as a tool by various factions of christians to attack eachother’s claims of knowledge of the divine will. Popkin shows Martin Luther’s attack on papal infallibility as an epistemological challenge, to which the catholics responded (using remarkably bad strategy!) by demolishing the protestant’s truth-claims as well. He portrays a scorched-earth war on claims of religious knowledge that culminated in enlightenment thinkers who adopted humanist principles for guidance because the religious had cheerfully demolished eachother’s foundations – leaving David Hume the last man standing on the rubble. (Hume leaned heavily on Sextus)

It’s a great read and Popkin’s view of history has become an essential framework for my understanding of religion, skepticism, and epistemology.

Sunday Sermon: In Defense Of Anarchism » « The Other 1%