This is a trope that we here at Argument Clinic have noticed with a thrill of apprehension.

Most recently was on Daily Kos, where someone in a comment thread challenged another comment, in effect: “please cite studies that show your point is correct.”

As you probably have guessed, we don’t recommend that strategy, because it’s a fairly weak move. It’s not a dreadfully weak move, but your opponent may negate it and hammer on you to some effect, so why leave yourself open?

If someone plays this maneuver against you, what is the best response? As always at Argument Clinic, we are going to recommend you go “meta” – instead of responding to the maneuver, respond about the maneuver. Note: this is not a dishonest technique; you are simply explaining why it’s not worth responding to the comment.

Consider:
Person 1: It seems to me that the republicans are going to get less popular if they keep doing that.
Person 2: Please cite any reference materials or studies you may have that support what you just said.

That’s the set-up for a “land war in Asia” scenario. Even if you follow suit and respond with links to studies, they are just going to say “does not apply” or dismiss the studies for bad methodology, or whatever. Think about it: you’re trying to rely on a study to convince them of something that they are already unconvinced about – only a person with high intellectual honesty is going to actually read and think about whatever study you provide. They’ll look for a way to blow it off. So, blow them off first.

Here’s a possible parry:
Person 1: Did you notice that this is the comment section on a blog, not an academic conference? Asking for citations is absurd. I was expressing my beliefs, which are informed by my interpretation of events and facts – you can disagree with those events and facts, but I don’t have to substantiate them. You’ll just have to do your own research.

If you really want to hammer on that point, you can come at it from an angle:
Person 1: Well, you’re implying that you don’t agree with my interpretation of events and facts, which is well enough, but when you ask for me to substantiate them, it seems to me as if you need to study the topic more and not ask me to educate you. Besides, you’re asking me to provide you with a bunch of information that you’re probably going to reject, anyway. Why not cut to the chase and do your own research then come back and present me studies and references to research that show I’m wrong? 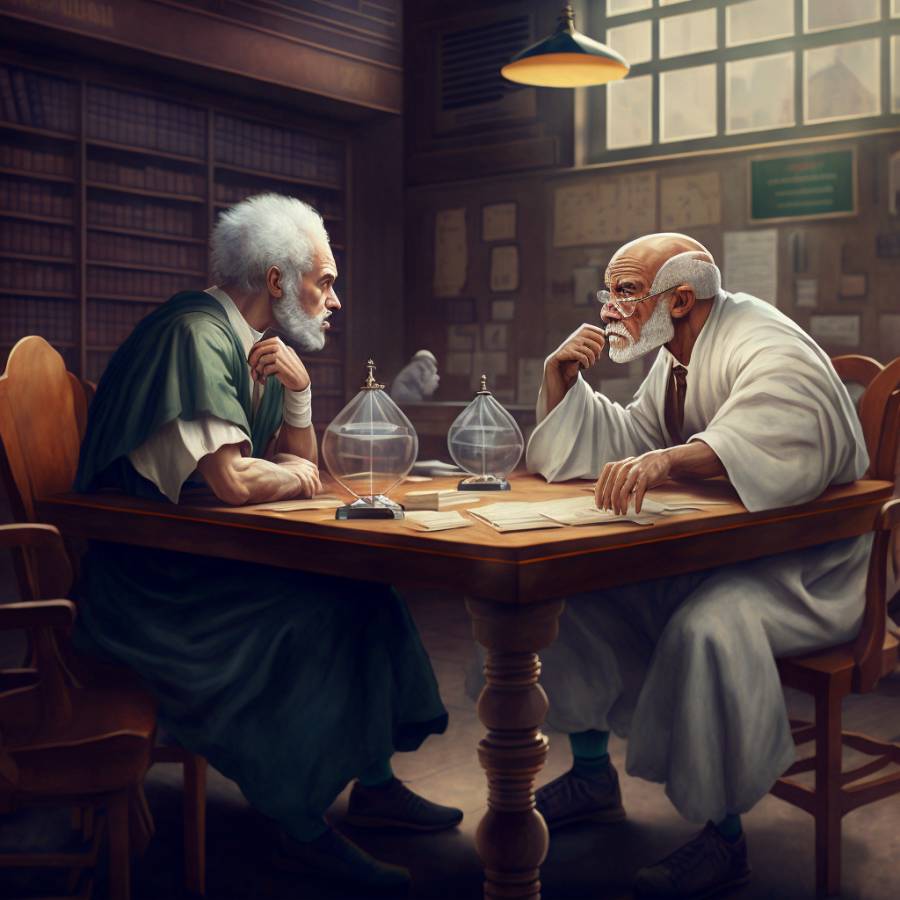 Midjourney AI and mjr: “argument clinic” (the AI appears to have decided independently that the arguers are Socrates and Freud. Interesting)

Unfortunately, this “please cite your references” trope appears to be an outgrowth of the early oughties skeptical movement, in which asking for citations was a normal maneuver. In the case where you are arguing about social science research, or medical research, citations may be helpful, but it has been our feeling that asking an opponent for citations in any situation but an academic forum is a fairly pointless move. As we’ve seen, people are perfectly happy to search up sketchy citations (e.g: “ivermectin may work against COVID” papers) and you wind up in muddy trench warfare slinging accusations of dishonesty or pushing dishonest references.

If you are actually concerned with honesty, rather than merely winning an argument, I suggest a maneuver like this:
Person 1: You are asking me to document how I formed my opinion. That’s fair enough. So, my opinion was largely formed by reading an introductory text in the topic of ${whatever} and I also follow articles related to ${whatever} on this website or that website, and I keep up with publications on the topic. I don’t  have academic credentials in the topic, but I think I’m pretty knowledgeable. What about you? Our disagreement is probably a consequence of imperfect understanding of the topic between us.

The best argument-killer response I ever saw was on a forum where someone was describing a not-very-good way of wiring a circuit panel. The other person responded:
Person 2: My title at my day job is “Master Electrician.”

To avoid having that trap grab your leg, always consider asking “what is your basis for knowledge?” It’s not a dishonest maneuver – it could be that the person you are talking to is a board-certified master of the topic, and you’re mistaken. Asking for citations, though, does not help clear that up. Although, in the case of the dmr@alice.uucp incident, I suppose Ritchie could have replied, “I wrote a book on the topic called ‘The C Programming Language’ I’m Dennis Ritchie.” Plunk.

So Much for “Superiority” » « A Question about Space Telescopes