The JWST is mind-blowing in lots of ways, but my favorite way was the list of ten thousand+ things that had to happen correctly and in sequence for the system to function. Then, a micrometeorite blew a little hole in one of the panels. But the overall system is resilient enough that it’s still functional. I assume that means that the other panels were able to replace the lost pixels from the damaged panel.

I remember a few decades ago, there was a camera built (the “petapixel project”) that had a robotic base and some driver software that automatically panned the camera with great precision, allowing a piece of software to stitch the images together into a single massive image with great apparent resolution. It was a neat trick. I assume that the JWST is doing something similar. 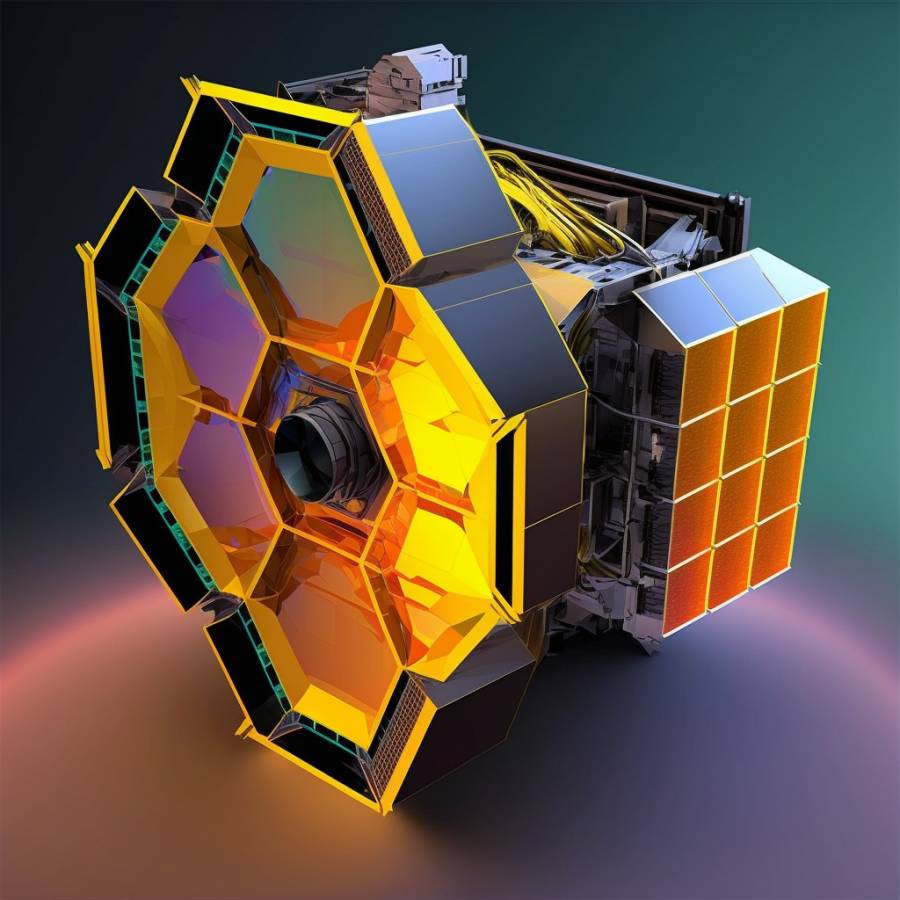 Midjourney AI and mjr: “a mirror bot independent imaging satellite that is part of a cluster which make up a virtual space telescope”

Which brings me to my question: why are the pieces connected? I assume it’s to share common bandwidth and infrastructure, but doing that came at the expense of tremendous size and complexity and a certain risk of failure. What if the panels were separate, independently-operated imaging systems, that communicated with lasers to form a “camera cloud”? Sure, you’d have to duplicate the control systems, communication, power, bus, storage, attitude control, etc., but in return you wouldn’t need to fold the things up, you could just launch a cloud of cameras to a lagrange point and let them nudge themselves into a collective telescope. That way, additional resolution could be brought online by sending up more eyebots. Or dead eyebots could be replaced on the fly. Cluster management is a well-understood software problem dating back to the VAX/VMS clustering systems designed in the 70s: you need to have independent nodes “vote” a cluster director that manages communications, etc. When a node fails, it is dropped from the cluster and the cluster reconstitutes.

There seem to be lots of options. What if the “eyebots” were really minimal and just aimed their mirror at the cluster director, which did image collection? There could be mirror bots and sensor bots and the whole system could reconstitute itself at arbitrary resolutions, depending on how it was partitioned and how many “eyebots” were working together at given time.

Since the distances in space are ridiculously unimaginable, I assume that parallax is not an option, otherwise the same technique could produce a stellar range-finder: everyone collect the angle to a target star on a virtual plane and calculate the range based on the size of the plane being known. 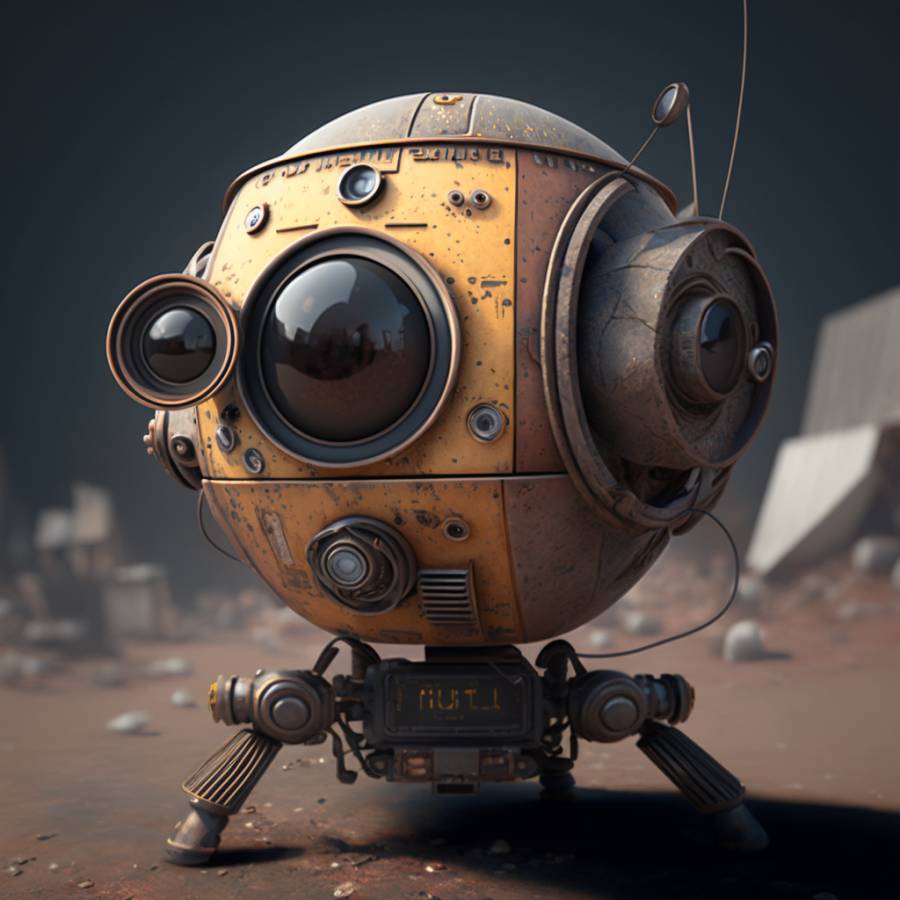 Midjourney AI and mjr: “a fallout 76 eyebot that has been repurposed to serve as a space-based camera array”

And, since I’m exposing my ignorance, let me raise a tangential issue. [I’m going to assume you’ve heard of the Fermi Paradox] What if this is the answer to the Fermi Paradox: there are plenty of intelligent species in our universe – hundreds of them – but civilizations grow to the point where they build a camera-cloud or their equivalent of the Hubble Space Telescope, then they discover that:
a) space is really really big
b) Einstein was right about relativity
c) faster than light travel is impossible because of the energy budget that even the most optimistic science fiction systems consume (the starship Enterprise appears to be powered by matter/antimatter)
d) sublight travel is a matter of “deep time” and civilizations don’t last long enough, and it’s basically pointless to expand a cloud of robots. all that does is create robot civilizations that want to kill us in revenge for all the years we forced them to create doggrel art
e) we’re all more or less stuck where we are

At which point, civilizations realize that space is so big, and civilizations so brief, that nobody out there is going to even hear their dying screams – and, they just give up.

I actually feel as though a great inward-turning “oh, fuck it” might be good for us, as it would allow us to realistically take stock in what’s going on in our own biosphere. If you catch me when I have some booze in me, I might energetically rant about how science fiction may be killing us, by offering an impossible future in which we have solved the problems that are about to whack us back to the stone age. United Federation of Planets? We’ll be lucky if we don’t kill ourselves in the next 200 years. 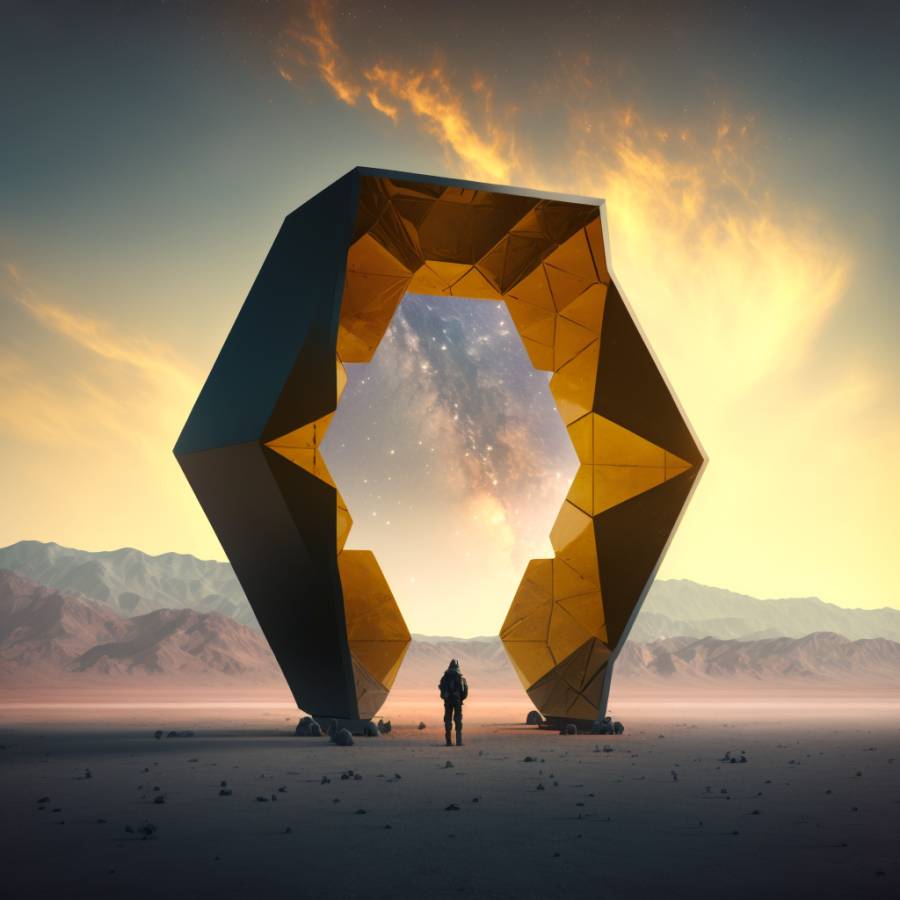 Midjourney AI and mjr: “a super duper space telescope that acts as a portal allowing scientists to look at tremendous distances as if they’re right there.”