This is a spoiler-free review(tm) of a game Anna and I have been playing. Our together game-play process looks a lot like her holding the controller and doing all the things while I mutter helpful and sometimes not contradictory advice, or cheer, or commiserate.

I have a lot of biases in how I like to game. I lean toward strategy games and away from “real-time strategy games” which seem to be a lot of rapid-reaction button-clicking. [I have played some; I just don’t tend to enjoy them as much] There are certain things in some games that will make my brain melt into agonized shouts of “why?! why!?” for example, if I am navigating through a lost/buried temple that has been lost/buried for 2,000 years, please do not have burning torches in sconces all over the place. Or nazis. Please do not have me in the process of being the first to step foot in a temple that has been lost/buried for 2,000 years and there is an entire nazi patrol camping out waiting for me, to show me that the temple was only lost/buried for 1,999 years and the nazis had a year to fortify. It’s a stupid trope and it tells me that, when I encounter it, I am going to be dealing with a game that regularly and ruthlessly insults the player’s intelligence.

Other forms of games that insult the intelligence are the games where you’re cranking along, exploring the buried temple, and suddenly you get to a platformer level, in which you have to jump from safe spot to safe spot to avoid the flying knives that have been functioning flawlessly for 1,999 years, did not collect a bunch of dead nazis (and get blown up by the survivors) – arrgh – do you see what I am doing? I am incapable of approaching games as just what they appear to be; perhaps its because the current times have drained my suspension of disbelief – I want enough of a believable narrative that my motivations make some sense, which is how/why I get up in the morning and shoulder my tools and go off down the road to fight monsters, or zombies, or nazis – all of which blur into “opposition” and I’m in a very manichean world that is simple and very, stupid and ultimately boring.

So, what does a game that does not insult your intelligence look like? A good example (thanks again InvivoMark!) is The Outer Wilds [review stderr] It is quirky, beautiful, fun, weird, thought-provoking, and that’s about as good as games get. It took us on a voyage of discovery and what we found at the end was ourselves; that kind of fun. Except to be honest, I didn’t learn anything about myself except that maybe I’ve been unfair to banjo music.

If it sounds, to you, from how I describe my idea of good games, that you might like what I like, give: Far: Lone Sails a shot. 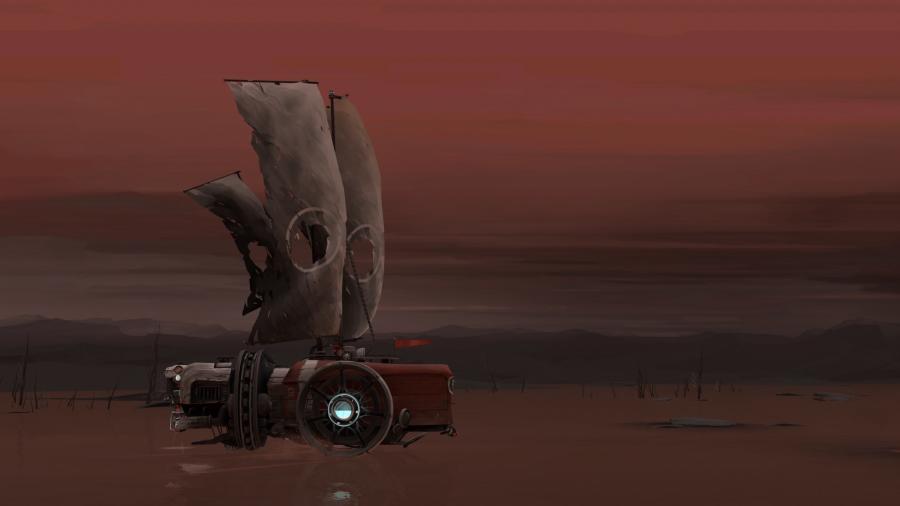 That is the explorer’s ship. It’s a dubious ship. When you first take over helping the explorer move the ship, there are no instructions – you have to run around a mash buttons and make it move. Then, we don’t know why yet, the explorer sets out on a long expedition in the ship. To be fair, I think we know why: noplace in the game, so far, looks like any place anyone would want to settle in and call “home.” Is that where we are going? That would be part of a sensible story arc/narrative.

The explorer and the ship encounter troubles on the way, and beautiful but downbeat scenery. Puzzles, there are. But here’s what I mean about not insulting your intelligence: the puzzles make sense in their context. Normally I hate platformer levels, because they ask us to suspend disbelief and accept that someone would build a touch-maze in that buried temple (“I know it makes getting to the bathroom tough, but I really hate tomb robbers and I’m pretty sure that 1,000 years after I’m dead my bathroom’s security system is going to rack up some nazis.”) That makes solving them interesting and rewarding: the ship can go forward. There are not (so far) nazis camping around campfires, and lighting torches – the puzzles are more like: there is a huge building blocking our path – let’s clamber around in it and figure out if there is some way to get something or other to open and shift so that we can continue on.

That sort of story-telling instantly wins me over. I do not know the “why?” of any of this, but I’m instantly rooted because I’ve been drafted into helping the explorer overcome problems that appear practical and grounded in the world-system of this game. The ship/car becomes a system that you learn to operate and without realizing it, you’ve been taught how to be a pretty good car operator. Mash buttons, run around, defeat obstacles, figure out each bridge as you come to it, etc. And it’s beautiful and quirky. I kept gasping out loud at the art-work. I’ll let you decide if I simply have no taste, or not. [I also loved the art-work in Disco Elysium]

I just realized that I have no basis to assume that the character we’re controlling is a boy. It’s a little jumping bunch of pixels and there’s really nothing that helps the player gender the character. Update: I decided to edit all references to “boy” into “explorer.” But now I wonder if we’re looking at an explorer or a refugee.

Buckets » « A Sharp Knife of Hatred