I’m a bit suspicious about the flood of “brave Ukrainian resistance” stories. Some of them are already revealed to be false, e.g.: “The Ghost of Kyiv” was a well-executed 3d rendering. The Russians are taking casualties but they’re par for the course and they won’t be minding them, although the NATO alliance has admitted that they are flooding the country with newer, better anti-tank missiles and related gear.

War is always ugly, and there’s a break-point where both sides flip away from thinking of it as an exercise in politics, and it turns into a matter of expressing how much you hate the other side. There’s a time when the humor goes and it’s slaughter and war crimes.

This morning I woke up to this one: [guard]

A woman is being hailed on social media after she confronted a heavily armed Russian soldier and offered him sunflower seeds – so that flowers would grow if he died there on Ukraine’s soil. ‘You’re occupants, you’re fascists,’ she shouts, standing about a metre from the soldier. 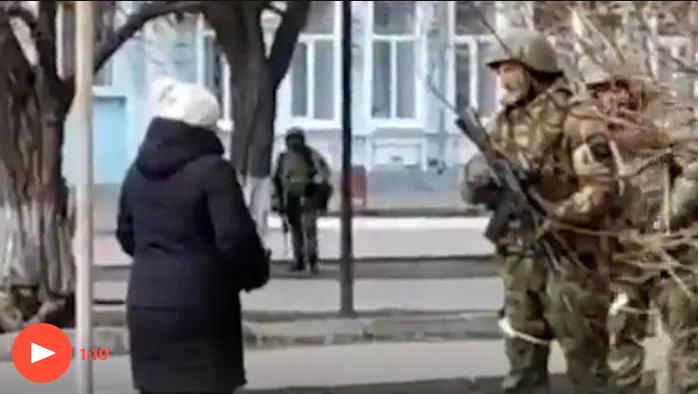 That’s some brilliant, pure, burning hatred right there. You’ve got to admire it. In another couple weeks, if the war has not wound down, that sort of thing would get her killed. Both sides haven’t worked up a good head of hatred, yet.

There is also the tale of the soldiers on Snake Island, 13 in number, who apparently told a Russian destroyer that demanded their surrender to “Fuck off.” Early reports were that they were killed but now apparently all 13 are alive to some degree or another. Snake Island is a worthless piece of rock and its ownership will be settled after the war is over; there was no need for anyone to get hurt over it.

Two other tales from the invasion: a Ukrainian man tried to stand in front of some Russian armored vehicles, which went around him. I think that was a courteous and sensible decision by the Russian vehicle commanders, who had the entire situation in their laps. Another Ukrainian man supposedly walked up to some Russians who had a broken-down AFV, and offered to tow them back to Russia. For now, it’s still possible for parties on both sides of the conflict to make jokes like that; civilization has not yet completely crumbled.