This is not just a few bad apples – this is some people who thought (a little bit) and decided it was an appropriate policy. Basically, a couple of dumb-ass grunts that thought this was a good idea and took charge of a situation that they created.

In case you couldn’t bear to watch it, what happens is: some troops have decided that they have caught some Iraqi looters and are punishing them in the field by crushing their car with a tank. There are many things about the scene that make me uncomfortable, including the presence of a local interpreter, and the troops standing in a perfect “circular firing squad” formation. 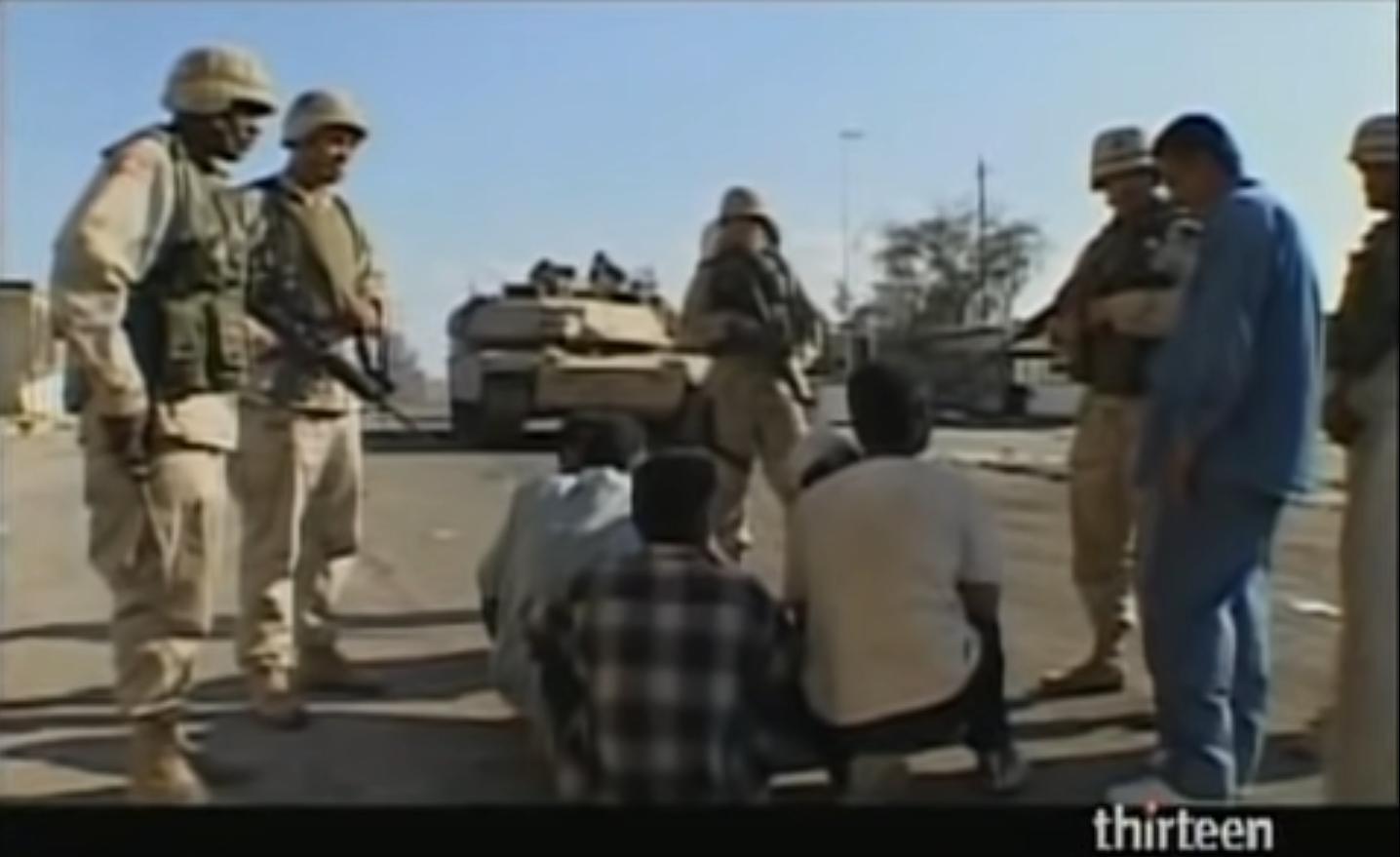 Whether or not this is a war crime (I suspect it is) in progress, it’s incredibly stupid: this is an exercise in impressing the locals through overwhelming force, not winning “hearts and minds.” I can’t tell what, if anything, is in the car but it appears that the “looting” may be simply a case of collecting some firewood. In either case, the troops are not interested in finding out what happened or anything like that – they’re just demonstrating their power which, in a nation that is tipping into insurgency, is a demonstration of profound weakness and stupidity, not power.

This “looting” does not look like ancient artifacts, or anything like that. It looks like scrap wood. In fact, perhaps I am particularly concerned with this video because – if that’s loot – the back of my tahoe looks like a pirate ship on most weekdays. 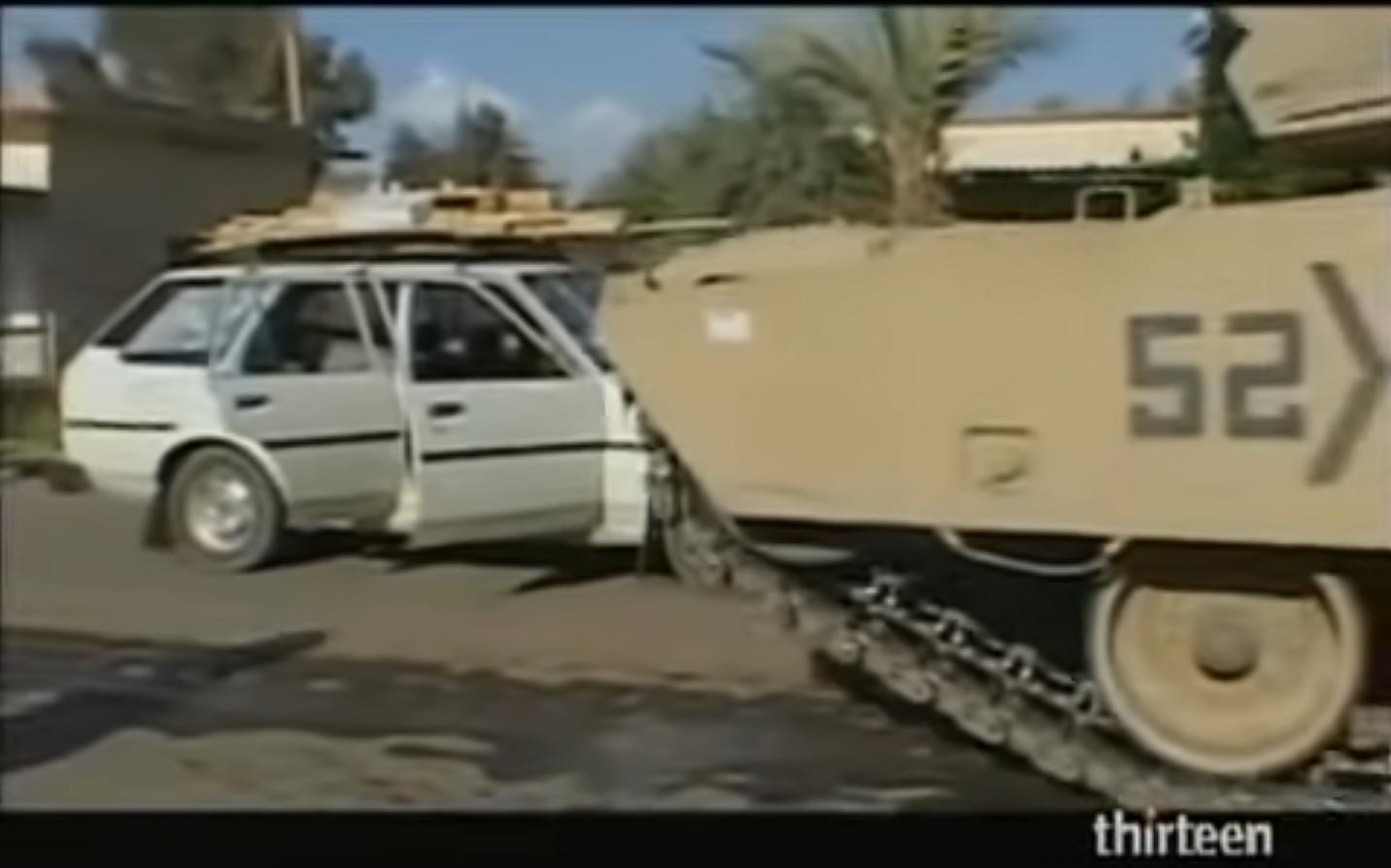 Also, you can observe the interpreter on the scene – those are the guys whose lives were in danger when the US troops left. That interpreter will be remembered as having participated in these demonstrations of power for his paymasters – why wouldn’t someone think “I’m going to string that bastard up when the Americans leave”?

Anyhow: hearts and minds. Those guys probably didn’t run off to join the insurgency after this, but they aren’t going to remember Americans well, and are certainly not going to feel “liberated” or appreciative of the US’ democracy-exporting operations.

Furthermore, this kind of thing does not happen without word of it getting around, video being shared, and so forth. It is beyond belief that the command structure for the tank unit and infantry did not hear about this incident. The unit serial numbers on the tank are clearly visible as well. The dismounted troops’ spokesperson appears to be a sergeant or private 1st class (hard to tell from the video) with unit flashes on display – it would be easy enough to identify these gentle people who are executing this brilliant public relations coup.

That’s what you get when you loot.

Later, the car’s owner told us: “I’m a taxi driver. The car was my livelihood.”

Of course, the troops did plenty of looting of their own, under cover of official authority. 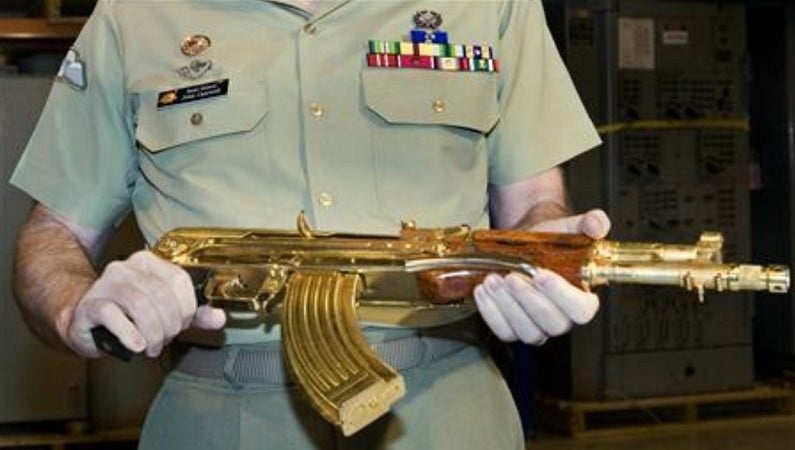 One of his most famous golden weapons was the golden Tabuk, an Iraqi variant of the AK-47. Soldiers of the 101st Airborne Division discovered it near Kirkuk, in northern Iraq. The weapon was given as an official “thank you” to the Australian troops that helped them in the area. The weapon traded hands a few times before Australia’s Deputy Chief of Army, Major General John Cantwell, accepted it and placed it in the Australian War Memorial in Canberra in 2007.

But that’s not really the point. What surprised me, but shouldn’t have, is that watching one “tank crushes civilian car” video brought up a bunch more. Apparently youtube’s algorithm thinks I’m into that kind of thing, now:

In that one, the car is pretty obviously already junk. There is no attempt to justify their actions as stopping looting or anything like that – it’s just a show of power, or guys being dumbasses with a $7 million tank. While a tank is capable of doing that sort of thing, it’s not necessarily good at it and it could be damaged by bits of car jamming a track, or the tank sliding sideways and hitting something. I knew a guy who was a tank driver who saw another tanker hit and shred the side of a building in Germany during REFORGER maneuvers – tanks don’t corner well on cobblestones at speed, the stones become like ball bearings and it fucks the street up to hell and gone. All of this is just stupid demonstrations of power.

Of course it’s an “insurgent”s car. But that’s bullshit, too – because it’s a civilian car and it’s sitting out, unoccupied, near a road, there are no “insurgents” anywhere to be seen. This is “hearts and minds” operations.

Imagine how shocked and angry Americans would be if someone did something like this and crushed some trumpers’ pickup trucks to show them how weak and helpless they are? Because, above all else, that is the message that this sort of activity is intended to send: dominance. When the US sent its imperial janissaries out to supposedly build Iraq into a “stable, modern democracy” they didn’t fool anybody; they were there to subdue the population and show them who’s boss.

I know this is a bit of an edge-issue, but it’s another example, for me, of how badly the typical American mis-places their respect for the people in uniform. They’re not warriors, they’re dumb, cowardly kids with massively over-powered gear, who mostly stomp on civilians. It’s notable to any student of military history that the only battles in the Iraq war that are even named as such (e.g: the battle of 73 easting) were turkey shoots by numerically inferior but technologically vastly superior forces. The fact that the numbers were on the other side doesn’t make it a noble battle, it illustrates that the victorious troops were willing to crush inferior forces. Sure, that’s how it’s always been throughout history, but in the old days nobody was talking any nonsense about “hearts and minds” and they were just trading force. If someone did it to us, it’d be “state-sponsored terrorism.”