I have added this one to my Recommended Reading List [stderr] – it’s been what’s been occupying my head for the last week, as I’ve been listening to the audiobook on scramble/repeat just because I was so captivated by the material. 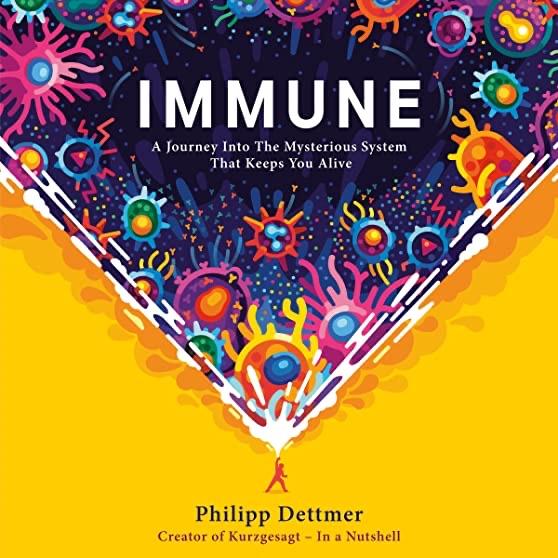 Constantly, it reminded me that evolved systems embody this strange crossover-point between baroque over-complexity and effortless elegance. Oddly, I have also, recently, been re-viewing “everyday astronaut”s talks about rocket engines, and over and over it keeps jumping out at me that immune systems and rocket science have both evolved albeit that rocket engines are intelligently designed, too. Both systems are characteristically extremely complex, life-critical, and are heavily based on things that have worked in the past, survived, and are expected to work again.

I’m aware that I’m going out on a limb when I say that I see echoes of evolution in rocket engines, and whenever I catch myself viewing engineered processes through an evolutionary lens, I remember the time I took a biologist with me to a computer security conference, back in 2009 or so: the speaker started talking about computer anti-malware systems that could evolve and as soon as the Q&A started my friend jumped up and said, “I’m a biologist and I’d like to mention that evolutionary models are only attractive if you’re willing to sacrifice billions of lives in the process of figuring out what works.” Boom. Anyhow – the similarities I see are in the feedback and control loops that are necessary for successful function. Right now, of course, the “cytokine storm” is interesting because of COVID-19, but, as Dettmer explains, it’s a feature of all immune responses. 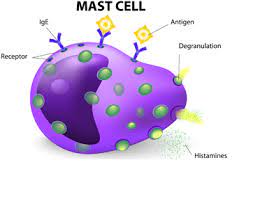 a mast cell. I’ll be damned, it does look like a bunny!

What blew/blows my mind about this book is how Dettmer managed to pull apart the components of this vast system and figure out a good order in which to present the pieces. I’m sure that other, many, textbooks on virology [amz] also had to accomplish that – but Dettmer is a “science communicator” not a teaching scientist, so he’s trying to straddle a line between making the science understandable, and technically correct – while simultaneously acknowledging where the boundaries are between what we know, and what we maybe know. There is a lot of that. I enjoyed and respected his aside in which he explains that he’d be crazy not to write a bit about COVID-19, and that he’s sure that readers want to know “what is the mechanism of COVID-19’s cytokine storms?” because no book that omits that would be timely except, unfortunately, we don’t know yet. Instead, he explains clearly how cytokines are used as the signalling and control pathway for some phases of immune response and how delicately balanced the system already is. The point is, it doesn’t take a large error in either direction to cause a disaster.

The explanations of things are comprehensible, lucid, and sometimes a bit goofy. For example, he’s fond of comparisons like, “if a cell was the size of you, a mitochondria would be about the size of a bunny.” That’s OK and that’s even pretty good, but he then points out that if all the mitochondria in our body were lined up, there’d be a line of bunnies that reached to the moon and back, or something like that. There are many parts of the book where he lapses into “god damn this thing is big and complex” which is true, but I found that mind-bendingly huge examples of “gee, wow” numbers still just left my mind bent and I substituted “fucktonnes” or “mega-fucktonnes” and left it at that. It’s still really interesting to think of the human body as a gigantic planetary-scaled thing for cellular-sized objects, with great big tunnels running through mountains and continent-sized organs, all floating around in wet stuff that is sticky and gluey at that scale. It’s interesting and if you’re subject to body horror and queasiness, it might be problematic. He certainly removes any gloss of magicalness from our biology – he’s definitely in the “hot bags of obscene glop” school, not “divine elegance” or anything like that.

Dettmer delivers the part(s) I had been really looking for: explanations of vaccines and how they work in the bigger context of our immune system as a whole.

Going one step further than just killing a pathogen are sub-unit vaccines. Instead of injecting a whole pathogen, only sub-units or in other words certain parts, “antigens” of the pathogen are used so they can more easily be recognized by T- and B- cells, which is a very secure way of vaccinating as it massively decreases the likelihood of an adverse reaction to the pathogen. This is because, sometimes, it is not the pathogen directly who causes harm, but their metabolic products – which is a nice way of saying, “bacteria poop.”

The book has a wry and light tone, which I think it necessary for such a massive topic. The footnotes are particularly clever and really come off well in the audiobook format, which is how I consumed it. Some of the footnotes have slightly silly (but still relevant asides) for example, at one point, he writes that the interior of our body is generally not exposed to sunlight unless something has gone horribly wrong.

Think about it for a few seconds and you’ll realize what a humongous topic our immune system (in context) is, and how much ground Dettmer had to cover. It’s a huge challenge and I think he did a great job of it. He also goes into things around the immune system, which are also important and I wouldn’t expect a teaching textbook to go into:

Your immune system is not a magic force that can be charged up like an energy shield, or laser weapon, but a complex dance of billions of parts – a beautiful symphony that has to follow a strict choreography to function in harmony. Any deviation makes your immune response either too weak or too powerful, and neither is good for your well-being and survival. If you listened this far you already know more about immunology than 99% of the general population. So, think about it: if you could, which parts of your immune system would you like to boost? Would you like more aggressive and stronger macrophages or neutrophils? Well, this would mean more and stronger inflammation, more fever, more feeling sick and tired even if you encounter small and relatively minor infections. How about super-strong natural killer cells to kill more infected or cancer cells? OK but they might be so motivated that they eat away at healthy cells that just happen to be around. Do you want to boost your dendritic cells so that they will start activating the adaptive immune system more? That would drain and exhaust the resources of your immune system even for small dangers, leaving you open and vulnerable when a seriously dangerous infection happens. Or maybe you could boost your T- and B- cells, making them much easier to activate but which would cause auto-immune diseases as some of these cells will certainly begin attacking your own tissue. Once your boosted antibodies and T- cells have started killing your heart or liver cells they will not stop until they have finished the job. Maybe this is all not dangerous enough for you and you’d rather boost your mast cells and the B- cells that produce IGE antibodies, the combination of cells that is responsible for allergies. Food that was only mildly irritating to your bowel will now cause violent diarrhea or allergic reactions that could kill you in minutes.

That’s all fun and games, but he points out that people spend ginormous sums of money on things that are alleged to “boost your immune system” and almost certainly don’t and – if they did – you wouldn’t want them, anyway. His concluding advice, there, [mild spoiler] is that getting lots of rest, getting exercise, and stopping smoking is the best way to keep your immune system happy. Not boosted. Happy.

This book is educational and fun. It is within the level of competence of a smart 12-14 year-old, which is an added plus if you know a kid that you want to inspire into a biologist, germaphobe, or immunologist. I shouldn’t say that, and you should take that last bit with a grain of salt because I don’t like kids. Recommended +!

The regulatory response to infection is evolved but absolutely brilliant. I can’t explain it well here and besides, Dettmer does it better, but it depends on the fact that immune system cells are programmed to die (“apoptosis”) fairly quickly and are attracted to an infection-site by cytokines, which they also release more of while they are attacking and destroying infections. So, as long as there is work to to, more and more immune system cells show up but when they run out of work they just hang around and die, then the cytokine levels drop and more cells stop showing up. It’s an example of a positive feedback control loop that would not be out of place in a machine (think: governors on a steam locomotive) but that evolved that way because that was just the way it happened to work that worked.