Success has many parents, who have PR machines behind them and trumpet it to the skies. Failure is, as they say, an orphan. In the case of Afghanistan, like Iraq, the war party has diligently flicked the remaining scraps of egg from its face and declared everything is the current administration’s fault (for doing exactly what the previous administration was planning to do).

I suppose the only good thing about it is it gives me pause to ponder causality: it’s impossible to point at one single thing in such a complex chain of events, and say “that’s why it failed.” The obvious answer is “once it started, it failed” but there are fractally complex sub-branches of failure. You can point at any cluster of those and say that’s why it happened. Ultimately, it was a multi-causal failure at the management layer, and everything past that point was foreordained. If I had to point, I’d say it was the Bush administrations’ demanding the Taliban unconditionally surrender and hand over OBL, who they no longer had their hands on by the time the negotiations had proceeded. (OBL, not stupid, left the country as soon as he realized the Taliban were going to be strong-armed into handing him over)

But I’m also fascinated by “no shit, there I was” stories. And some of those are coming out, too.

The most passionate and (I think) best, right now, is a piece from one of the generals formerly commanding the Afghan military, writing in the New York Times [nyt]:

President Biden said last week that “American troops cannot and should not be fighting in a war and dying in a war that Afghan forces are not willing to fight for themselves.”

It’s true that the Afghan Army lost its will to fight. But that’s because of the growing sense of abandonment by our American partners and the disrespect and disloyalty reflected in Mr. Biden’s tone and words over the past few months. The Afghan Army is not without blame. It had its problems – cronyism, bureaucracy – but we ultimately stopped fighting because our partners already had.

He points out something most of us knew: the US tried to build the Afghan military into a “mini me” version of the US military: heavily reliant on air power and mobility, which are great but expensive and require a lot of training. As the US kept finally drawing down its forces, there were only about 3,000 left, mostly at fortified fort Zinderneuf-like compounds away from the action where it was nice and safe. The Afghan military were basically artillery spotters and forward air controllers – but they never had or built the kind of capability that maintains the rear echelon necessary to do that. When the US left, the planes and helicopters and artillery left and that tore the heart out of the local forces.

By the way, it also didn’t help that the US forces were using Afghanistan as a training-ground for their new incompetents. Check out this:

That’s a bunch of guys trying to hit a mountain with a howitzer and missing. The round went over and “oh well as long as you didn’t see it hit, it’s not yours.” By the way, now you can see why I call it “Fort Zinderneuf” – there are even parapet walls with revetted fire-nests. It’s a mini Khe Sanh.

There is another heartfelt piece on Counterpunch about an artillerist’s experience in Afghanistan. Sounds to me like he was a sympatico guy who allowed himself to feel like he fit in, which is nonsense because when you’re the only guy in the room with a gun, you’re not representing friendship. Cops pull that routine, too: “I’m just folks” except if you smart-mouth me I may kill you with impunity. [counterpunch]

Our job, as well, was one of contradiction. We were not, as stated, training the Afghans to shoot artillery. There was a team who oversaw the Afghan battery of old Russian D 30 howitzers. On the other side of the base was our guns. When we were fired upon or needed to assist an Afghan platoon out on patrol, both Afghans and Americans would be called up. But only one fired at the enemy. The Afghans would be allowed to shoot, always before us, and never at the target. They were not trusted yet and the consensus from the team overseeing them was that they were a long way off from being ready. Our platoon was left feeling as though we were doing something, while being told we were not to be open about the something we were doing. The Combat Action Badge, that shiny piece of metal non-infantry combat men covet, was denied on the grounds that the Afghans officially engaged, not us.

The US military is top-heavy with REMFs who’ll say “You train as you fight, and fight as you train.” I.e.: you learn on the job, and the degree to which you learn the job depends on how you do the job. What does that mean if you’re an artillery team using old Russian gear and you’re not allowed to actually shoot except training missions not on target? There are probably a lot of other things going on, one of which is: how can you train to use an old gun, if you’re using a gun that has less range and accuracy than a new gun? I.e.: “train to fail on the fail train!” The article strips away the lie: the Afghan forces weren’t doing anything and never learned how to do anything because the US was fighting the war and didn’t trust the Afghan forces near live artillery – presumably because they might turn around and fire on some US target in a “blue on blue” incident. I’ve read other accounts of Afghan forces going on patrol with US troops and the patrols were separated so there were no “blue on blue” danger. I.e.: they were going on patrol separately, at different times and places, not “together” at all.

The US spent a lot of money in Afghanistan supposedly building a military but actually just having a good time lining everyone’s pockets. If they had been trying to build Afghanistan a military that could hold the country, it would have looked a lot like the Taliban: more people, less gear, and a lot of Toyota pickup trucks instead of aircraft.

And, sure, it doesn’t help that the government evaporated as soon as the Taliban came close to Kabul – with president Ghani appearing later in Dubai in an airplane full of US taxpayers’ money (estimated to be about $160mn). Back around when the US was still “considering” invading Iraq and they were throwing around cost projections like “$300bn! and Iraq will pay for its liberation.” (the same way Mexico paid for the wall) I suggested to some friends that we could probably just take the money and offer it to all of the officers and NCOs of the Iraqi military to step down or overthrow their leaders – instantly creating a middle class of millionaire bureaucrats that were former military and had organizational skills. We talk about “class war” but really what we need is “class inversion” – let the ci-devant push lawnmowers and clean house for their former servants. But, the US created that government, for specific reasons, and allowed it to fail because it wasn’t getting its job done.

I mentioned the Taliban’s flirtation with Unocal and the theory that the whole war was about a pipeline as much as catching OBL, and that did not go over well. Apparently sometimes reality sounds too much like conspiracy theory to take it seriously. If you’re interested in that topic, here’s a pretty good summary [historycommons] It’s paranoid-making stuff. I don’t see that as any more incredible than finding out that the US is in Syria, pumping oil and selling it through shell companies in Iraq. “That’s how it’s done, folks” as Barack Obama said.

It will be interesting to see if the Taliban show their islamic values by suppressing the opium trade, or if they can’t resist the money. The US military got itself in the middle of picking sides as to which warlord’s opium fields they were going to protect and which they were going to burn. Will opium crops go up, as the Taliban become more forward-thinking and liberal, or will the opium farmers get shot? It’s going to be interesting to see. 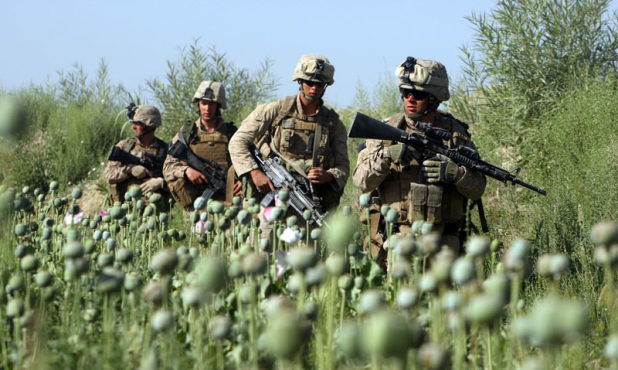