Every spring there comes a day when it’s time to see if I can mow the grass.

Usually, it’s a matter of making sure the battery is charged up, and cranking it a few times. Not this year. I put the choke in its usual position, foot on the brake, and turned the key. Nothing. OK, it’s probably the battery. That’s no problem, because I keep the battery from my old Honda on a trickle charge, and a set of jumper cables right next to it – for exactly this reason. I hook it all up and turn the key. Nothing. Uh, oh, this is not going to be the usual spring crank-over.

My usual procedure in this situation is to assume my batteries are both dead, but the trickle charger showed the car battery as being at full charge. So, something should have cranked over, or something. I unhooked the battery to see if maybe the connectors had corroded and, while I was at it, hauled it in and hooked it to the trickle charger: full charge. Now I am getting a bit worried – this is not normal spring failure, this is going to eat my morning at the very least. Since I have the battery off, I figure I’ll check and make sure the battery leads are not corroded or cracked, by connecting the alligator clips from my charger, turning the charger to 30a, and turn the key.

Now, the mower roars into life for exactly 2 seconds, then it cuts off. In those two seconds, it puts out a WWII-style smoke screen of dense, white, smoke (from the exhaust pipe). By now, some of you may have a theory about what’s going on, but you haven’t got enough information, yet, to figure it out. I haven’t given you the relevant bits because I’m tracking my thought-patterns and, besides, if I told you the relevant bits in advance you’d just think, “well, duh, Marcus.” Here’s another of the relevant bits: I usually change the oil at the beginning of each mowing season; I let the old air filter and oil sit in the engine over the winter to protect it, or something. Last year, for literally no reason I can think of, I did things differently – I changed the oil and filters in the fall, sprayed things down with a good coat of WD-40, put some alcohol in the gas tank, and ignored the mower like a virtuous home-owner does. Oh, and one more thing. The year before, when the mower wouldn’t start, I had a heck of a time pulling it out from under the porch where it’s stored, so last year I parked it the other way around. The front of the mower was downhill (it’s not steep, maybe 10 degrees) so if I needed to, it’d just roll right out once I put air in the tires.

Having it facing downhill was a good idea because this year’s starting season got off to a bad start, and it was nice to be able to just roll it out into the sunshine where I could work on it (and not have any risk, at all, of setting my porch on fire) (the mower is parked under the porch) I thought about it a bit more and decided to text Mark. 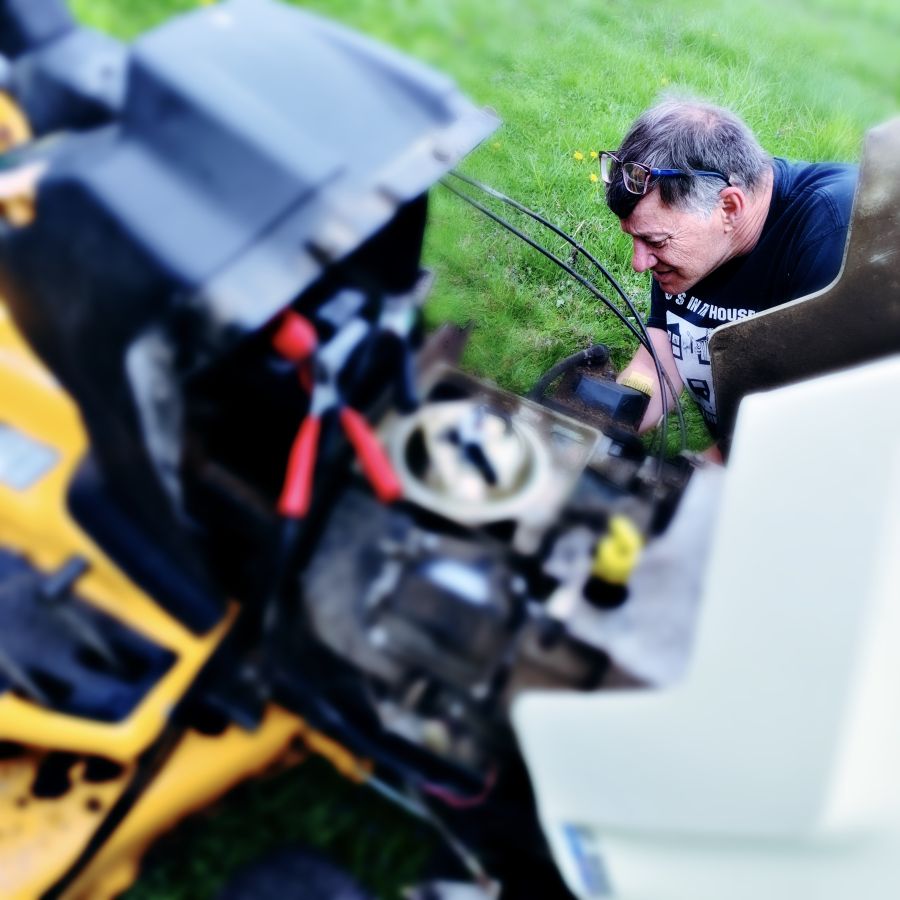 Let me introduce Mark. He’s the guy who lives next to my school/fortress of solitude. Mark is Good At Stuff and often pitches in to help when I ask for it – he’s helped pry heavy machinery, run 220 circuits for my welder, lift things that are too awkward to do solo, and so forth. Mark’s a good electrician and my fortress of solitude would be dark and silent if he hadn’t helped me sort out the wiring at the ancient un-grounded 1950s panel that the place came with. Some of the circuits were arcane and Mark figured them out. He also has an operates a 20-plus year-old zero turn John Deere mower, and I know he can debug mowers like nobody’s business. So we plan to take a look at the thing the next morning (this morning) when, of course, it’s drizzling and gray.

The first thing Mark does is checks the dipstick and hypothesizes that that’s why the motor shut down – he points to a thing on the side that says, in chrome letters, “oil level safety control” (or something like that). We add oil and wait, then try firing it up. This time, it runs and keeps running, but it’s still making the smoke-screen of white smoke. The first bit of diagnosis is pretty easy: the oil was low, so the engine’s safety cut-off engaged and killed the engine so it wouldn’t suffer any damage from running at low pressure. But that obviously has not solved the problem – I can’t operate the mower and, worse, it smells a lot like gasoline. I’m glad I pushed the mower out from under the porch. My house is timber-framed, largely made of Hemlock and Pine, and would burn like a roman candle if it catches even a little fire. So Mark checks the dipstick, sniffs it, and announces that there is gasoline in the oil – and not “a little gasoline” – quite a lot. While we started to drain the oil, we examined the situation from all angles and I described what I had done differently from usual, including changing the oil before storing it, and parking it head-down. That was the moment it all clicked. This particular mower has a gas tank in the rear (I approve: far from the engine) and with the mower parked head-down, the tank was almost 6″ higher than it would normally be, and when I added the fuel stabilizer (alcohol) I topped the tank up. As the temperature cycled the expansion/contraction of the air and fuel in the tank would have gently pumped the gas into the carb, where it would have dripped down through the open valves in the intake manifold.

Our conclusion was that a) my mower was a fuel/air explosion waiting to happen – all it needed was a good spark and b) I needed to change the oil and run it a bit and it’d probably be fine. Then, Mark turned his attention to the tendency for the mower to not crank when the key was turned. A tap on the solenoid with a wrench, “Now try it.” Problem diagnosed: I need a new solenoid eventually. But, to be honest, I’ll probably just carry a wrench in my pocket. When I was a kid, my dad had a 1961 Simca Aronde which had a similar problem; he drove it like that for years, even to the point of making a bracket under the hood to hold a steel rod that was perfect for solenoid-thumping.

After Mark went home, I got another jug of oil and a new filter, then changed the oil. That entailed lying on the grass and reaching up under the frame to unscrew a drain-plug. That process completed, I stood up and discovered that I had been lying in a substantial mound of deer poop.

I find problem-solving to be so fascinating, especially when it’s a problem that I mostly understand and I can fill in the holes of, to fully understand it. For someone like Mark, it’s not even really a problem: he has a great big flow-chart in his head of the things you try, and what things that uncovers, so he cannot make the error that I did, of combining the solenoid problem with the motor smoking problem. Mark knew immediately that there were two things going on, because the problems that were manifesting never manifest together (the electrical system does not make the oil smell like gasoline). There was a time when I could diagnose other people’s code like that – if it crashed in a certain type of operation I knew it was almost certainly a file parsing problem, or a memory deallocation of a wild pointer, etc. I used to imagine that someone could write “thing diagnoser” flow-charts that were paper-based expert systems that would lead a user through a rough first-order diagnosis. I suppose it would be hard to maintain them, but who wouldn’t want a “lawnmower diagnoser”?

What bugs me is that so many problems with things come about because a cheaper part is used in order to save a few pennies across a large quantity of machines. I’d pay $100 more for a mower, if certain parts were stainless steel or aluminum, or the solenoid had a higher mean time between failure, or whatever. But, back when I worked at NFR one of the guys, who was an actual aerospace engineer explained it to me: you can’t just improve one part of a system to make it longer-lived, because then that exposes another weakness right behind it – you wind up having to re-design the entire system for its new service life target, and eventually you stumble on some aspect of the system that will cost a godawful amount of money to build for durability. I remember at the time he said you could build engines with ceramic blocks and they basically never would wear out – except you’d still wind up getting hit by a truck and having to write the whole thing off and, meanwhile, your car would cost $250,000 instead of $30,000. Good point. I still replaced the bolts holding the battery wire with stainless bolts, damn it.

Why Not Post It To Pastebin? » « Science Saved My Soul