One of the side-effects of the recent focus on police shootings in the US, is that outside agencies are starting to track and publish statistics about the police. Those attempts uncover additional layers of horror; under the shit, there’s more shit.

The Washington Post is maintaining a database about police shootings [wapo] and it’s got a lot of depressing information: 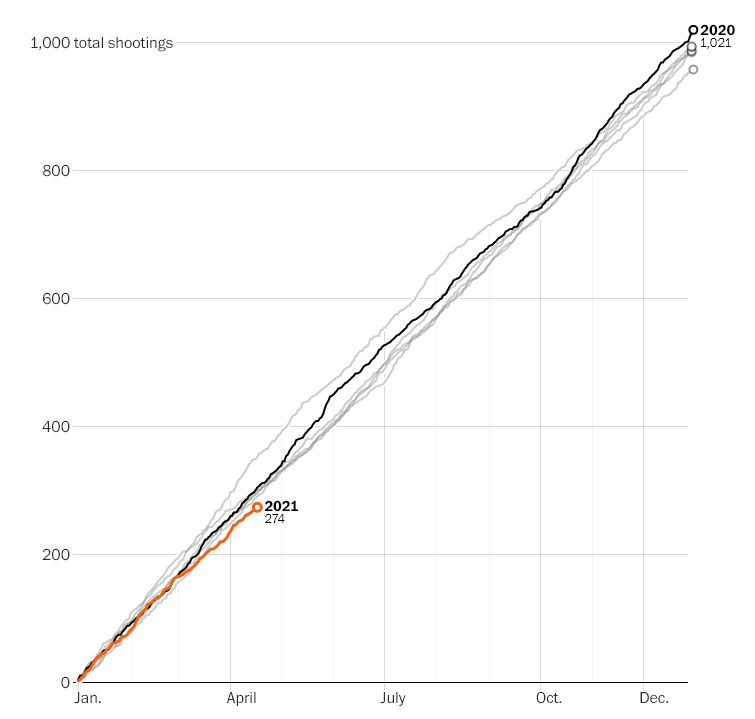 The police are a killing machine that chugs along at more or less the same rate, regardless of all the media focus that has been directed toward the topic. It’s not “as if they don’t care” it’s that they really, truly, genuinely do not care. Or worse. They’re outright malicious: [salon]

A police officer told a crowd gathered at the scene where a Black teenager, Ma’Khia Bryant, was killed by police in Columbus, Ohio just minutes before the verdict in the Derek Chauvin murder trial was announced on Tuesday that “blue lives matter.”

The crowd had, literally, just seen a cop gun down a 15 year-old child, and one of the cops on the scene felt it was necessary to flex his power. The cop knew that he was being recorded on camera, and he knew that it was going to wind up on the internet – but he was confident enough that he felt he could get away with it. The cop who shot the girl, Nicholas Reardon, [abc6] is a relatively new cop: 1 year on the force – but apparently apples rot pretty quickly in Ohio. At this time there is no indication that Reardon has been fired or will be prosecuted, and the name of the cop who yelled “blue lives matter!” has not been disclosed (and they have not been fired). It’s hard to imagine more incompetent “customer service” in any other industry.

Cops, in the line of duty, have to deal with disturbed, drunk, angry, and injured people and those can unquestionably be dangerous. But that’s not an excuse for causing more disturbed, angry, and injured people! The claim is that they have to make split-second decisions, which is true, and that they are in danger of being killed by a gun-toting citizen – which is… Less true? If we listen to the cops, it’s like OK Corral out there, and they’ve got to constantly be ready to kill or be killed. But if that were true, why this: [FBI]

According to statistics reported to the FBI, 89 law enforcement officers were killed in line-of-duty incidents in 2019. Of these, 48 officers died as a result of felonious acts, and 41 officers died in accidents. Comprehensive data tables about these incidents and brief narratives describing the fatal attacks are included in Law Enforcement Officers Killed and Assaulted, 2019, released today.

Almost as many cops were hit by cars in the line of duty, as were killed in “felonious acts” [the FBI is not known for the beauty of its writing, for good reason]:

“Tactical situations” – such as dealing with someone barricaded in a building, or holding a hostage – those are not the OK Corral situation, there’s not an element of surprise going on. Call for backup and de-escalate from safely out of range. It appears to me that about 9 cops, last year, got killed because they were walking up on someone in a car, and were shot.

It’s probably more likely that too much sugary, creamy coffee and yummy donuts are going to kill any given cop, than a gun battle. Yet, cops continue to justify drawing weapons and shooting first, because they are afraid that the person in the car is going to produce a weapon and kill them – or that the 15 year-old girl is going to produce a knife and stab them through their body armor. It’s situational, but a full-grown cop who can’t kick a 15 year-old’s knee out does not belong on the force. But, more to the point, cops need to show some strategic sense: if you have a gun and your opponent (theoretically) has a knife, then you need to manage the range between them and you, and you win the engagement. The whole point of a firearm is that it allows you to manage the range in a tactical situation, which is why the cop who killed Duante Wright was wrong: they had no business assuming they were about to find themselves in a gun-fight, and no business taking the tactical advantage of surprise.

If cops don’t like the tiny sliver of risk that comes with their job (getting hit by a truck while they swagger down the street to give someone a ticket) they should get a job working for FEDEX or UPS or Starbucks. Or, if they want to shoot people, they can join the army and commit war-crimes in faraway places. If they want to act like they’re at OK Corral, they need psychological counseling and drugs, and they need to stay off the steroids and learn to handle tactical situations using the zen approach: by not being in a tactical situation. I remember, when some of us were discussing the Musashi movie series (starring Toshiro Mifune) after Iaido class, our sensei sighed and said, “Musashi had mental problems. No rational warrior seeks such a high level of conflict. A good warrior wins duels by not being present at the duel.” At around the same time as I was studying iaido, I was also buffing my tactical pistol and rifle skills, and I started the process of seriously re-thinking what it means to get into a tactical situation. One of the key points you learn in iaido is that your opponent may draw a sword on you at any time, and you must be prepared to – as John Boyd would say – get inside their OODA loop: defeat their intent with a positive action of your own that breaks their initiative. If you were a crazed samurai like Musashi, then you would shoot the guy in the car because they moved funny,* but that’s not the actual situation that a cop is in. Or, if they think they are in that situation, they are mistaken and they should not be cops.

That was when I realized that, in order to be tactically prepared to respond to violence, you have to become a dangerous person. When you answer the door, you have to have your gun in the back of your waistband, locked and loaded, because it might not be the postman. You have to walk around your house at night in the dark so you’re not silhouetted against a window for a sniper. Your katana must be in your belt, properly, and your posture must be correct and your distance right, so you can draw it with blinding speed and get inside your opponent’s attack. In other words, you must live constantly in a fantasy-land of the most extreme violence. My sensei didn’t bother to say it, but you have to be a dangerous, crazy asshole. What else would you call someone who creeps around their own house in the dark because they’re afraid of snipers? Or who answers the door expecting a ninja assassin with a sword, instead of the UPS guy? Or, who shoots a 15 year-old girl because she might have attacked with a knife? A non-dangerous non-crazy non-asshole would get some tactical distance, perhaps prepare a weapon, but then ask the girl, “What’s up? How can I help you? Please let’s not have any trouble.”

Basically, cops are saying that they’re scaredy-cats who live in that fantasy world, in which their lives are constantly being threatened. In the US there are around 600,000 cops. And only 9 died in tactical situations. Assuming some fudge factors, we might expect to lose around 10,000 cops to COVID-19. I can’t come up with a good risk metric for donuts and coffee, but before it became a stereotype it was a fact that a lot of cops stopped by Dunkin’ several times a day for “free” donuts and coffee. That’s more life-threatening, to the non-dangerous, non-crazy, non-assholes in the force. If there are any of those.

Blue lives matter, but they don’t matter that much.

* Musashi: Normal people we shit-scared of Musashi. He lived in a cave in the middle of nowhere, an outcast. Sensei was right, he almost certainly had mental problems – at least PTSD and probably severely bipolar, from descriptions of him. It’s interesting that he is held up as an enlightened individual but I think he was probably a highly compensated sociopath. He’d have scared the shit out of Derek Chauvin. He’d have scared the shit out of most people; for crying out loud this was a guy who chopped people apart with a blade, and regularly faced being chopped apart himself. It’s saying a lot about shoho-era Japanese culture that he was considered to be anything like “normal.” And it says a lot about US culture that Derek Chauvin is considered qualified to be a cop.

I saw a statistic somewhere that blew my mind so hard I don’t believe it. Something like 25% of some police departments’ cops use anabolic steroids. What, excuse me? What percentage are also using meth, I’d like to know. What a fucking mess.