This is reported in The Guardian – and I heartily suggest you read the whole source article, if it interests you.

A handful of coins unearthed from a pick-your-own-fruit orchard in the US state of Rhode Island and other random corners of New England may help solve a centuries-old cold case.

So, one of those guys who likes to run around with a metal detector, detecting metal, made an unusual find: buckles, bullets, various junk from the colonial era. It’s cool and it’s valuable but not very. But his finds were interesting enough that he went back for another pass and found some coins.

When I was a kid, I used to search old abandoned buildings in the south of France. One day, I was up in a barn and found a dessicated leather bag behind a loose rock in the wall. Naturally, I grabbed it and examined it – it contained a few silver Louis’ (coins of Louis XVI) and some coins with Napoleon Bonaparte on them. That made it fairly easy to date – it must have been some family’s secret fortune. In modern terms, it was not quite worthless; the coins were very worn and only three were silver. No gold. But – wow – was that exciting for a 15 year-old kid! As I write this I am kicking myself for not having the Napoleon here in my desk (where it used to be) – it’s in my safe deposit box and getting stuff to/from the bank during the pandemic is tough. You’ll just have to believe me that it exists. By the way, later my dad and I figured out that the leather bag was a cartridge-box of military issue. Were the coins some retired soldier’s cache? We will never know.

Back to the coins in the pick-your-own:

The villain in this tale: a murderous English pirate who became the world’s most-wanted criminal after plundering a ship carrying Muslim pilgrims home to India from Mecca, then eluded capture by posing as a slave trader.

Jim Bailey, an amateur historian and metal detectorist, found the first intact 17th-century Arabian coin in a meadow in Middletown.

Isn’t that cool as all get out? So you’re looking for coins and you find: arabic silver from the 1600s. 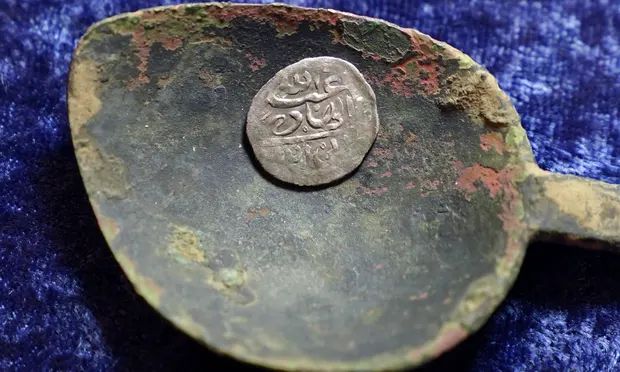 This story struck me particularly, because I had just finished re-reading Charles Mann’s 1493 [wc] which goes into a lot of the impact that new world silver had on the global economy of the old world. Suddenly, there was a massive explosion of trade everywhere. And, of course, with the trade came the crimes. Arguably, much of the trade was crime, too, but that’s a more complicated story. Let me reinforce this: 1493 is a really fascinating book and it goes into a lot about the economic, social, and biological knock-on effects after the ‘discovery’ of the new world. Many of those effects, you already know about: syphillis and potatoes for the old world, flu and smallpox for the new. It all sounds catacalysmic but it probably wasn’t well-enough understood at the time, by the people going through it, so it just seemed like turmoil as usual. Remember: the European colonialist powers were constantly warring, anyway – they just added the colonies to their existing wars and alliances. And, of course, lots of people suffered horribly so that tobacco, cotton, silver, and people could be marketed, transported, and bought and sold. Mann’s book is mind-blowingly chock full of such details.

That ancient pocket change – the oldest ever found in North America – could explain how pirate Capt Henry Every vanished.

On 7 September 1695, the pirate ship Fancy, commanded by Every, ambushed and captured the Ganj-i-Sawai, a royal vessel owned by the Indian emperor Aurangzeb, then one of the world’s most powerful men. Onboard were not only the worshippers returning from their pilgrimage but tens of millions of dollars’ worth of gold and silver.

What followed was one of the most lucrative and heinous robberies of all time. Historical accounts say Every’s band tortured and killed the men onboard the Indian ship and raped the women before escaping to the Bahamas.

I’ll stop quoting the entire Guardian story at you, there. See what I mean, though? The 17th century sounds like it was a particularly crappy time on Earth: because of the social upheaval from colonialism, exploration, and exploitation, everyone was metaphorically hoisting the jolly roger. It wasn’t just pirates, governments were issuing letters of marque against eachother, etc: for an ordinary ship-ful of people, being at sea was a fraught proposition. It sounds like everyone was out to kill or exploit everyone else. I’ve often wondered “what the fuck is wrong with Europeans?” but I suppose any other humans would have behaved the same if they had the power to do so.

Research confirmed that the exotic coin was minted in 1693 in Yemen. That raised questions, Bailey said, since there was no evidence that American colonists struggling to eke out a living in the New World travelled to anywhere in the Middle East to trade until decades later.

Mann’s description of some of the amounts of silver that were moving around the globe are truly mind-boggling. Also, how they were extracted: a process involving clay, lead, mercury, and silver ore in which they were baked and mashed into an amalgam from which the silver could eventually be separated by dissolving it into the mercury and allowing it to settle out. The silver mines at Potosí sound like hell on earth. But it’s not that much worse than modern capitalists would invent if there weren’t all of those annoying regulators trying to stop them. Needless to say, the people doing the mining were captives, slaves, or otherwise subjugated, and they went mad from the lead and mercury and died in the tens of thousands. In many ways, that silver coin found in Rhode Island has blood all over it.